Objectives: This study aims to detect hydroxychloroquine (HCQ)-induced retinal toxicity at an earlier stage through the use of spectral-domain optical coherence tomography device, especially by measuring macular retinal ganglion cell-inner plexiform layer (RGC-IPL) thickness.
Patients and methods: In this study, 92 eyes of 46 Caucasian female patients (mean age 53.6±8.1 years; range 32 to 69 years) who were taking HCQ were assigned to group 1, while 80 eyes of 40 age-matched Caucasian female control subjects (mean age 56.1±10.7 years; range 34 to 71 years) were assigned to group 2. RGC-IPL thickness and retinal nerve fiber layer thickness were measured in all subjects by Cirrus high-definition optical coherence tomography model 5000 device using macular cube 512¥128 and optic disc cube 200¥200 protocols. We performed an evaluation to see if there was any difference between the measured values of the groups. The correlation between average RGC-IPL thickness measures and cumulative dose of HCQ and duration of use was analyzed.
Results: Retinal ganglion cell-inner plexiform layer of group 1 was found to be statistically thinner than that of group 2 both on average and in all segments (superior, superonasal, inferonasal, inferotemporal and superotemporal) except inferior segment when segmented (p<0.05). Additionally, a statistically significant negative correlation was found between the average RGC-IPL thickness and cumulative dose of HCQ (r= -0.371, p=0.001) as well as the duration of use (r= -0.308, p=0.006).
Conclusion: Patients taking HCQ were found to have decreased RGC-IPL thickness at an early stage due to retinal toxicity induced by the drug. We think that measuring the RGC-IPL thickness may become an important objective in HCQ screening tests.

Chloroquine (CQ) and its chemical analogue hydroxychloroquine (HCQ) -known as antimalarial drugs- have been used commonly since 1950s for the treatment of various autoimmune rheumatic diseases.(1) The efficacy and toxicity of HCQ are lower than those of CQ.(2) Ocular toxicity induced by these drugs was first described in 1957.(3) These drugs are eliminated from the body very slowly. Their deposits on cornea, ciliary body, lens, retina and choroid may lead to ocular side effects which are usually reversible upon discontinuation of drug.(1) The most common ocular toxicity induced by antimalarials presents as bull’s eye maculopathy.(4) When retinal toxicity develops, it leads to irreversible and sometimes progressive loss of visual acuity, color vision, and central visual field defects.(5) It is important to detect retinal toxicity before it leads to irreversible consequences.(6) There are several tests that are used to detect retinal toxicity such as visual field analysis, fundus autofluorescence photography and electroretinography (ERG).(7)

Previous histopathological studies conducted on the retinas of people with CQ retinopathy demonstrated that photoreceptors and neural retina were damaged.(8,9) In their study on monkeys, Rosenthal et al.(10) showed that CQ resulted in the degeneration of retinal ganglion cells. Pasadhika et al.(11) showed that perifoveal retinal ganglion cell-inner plexiform layer (RGC-IPL) thickness decreased in patients who had been taking HCQ for a long time before any functional or structural impairment occurred in retinal pigment epithelium layer and photoreceptors. The number of patients in that study, however, was very low and they did not examine the correlation between perifoveal thinning and use of HCQ.

In recent years, spectral domain-optical coherence tomography (SD-OCT) has been used commonly for early diagnosis of retinal impairment. Macular RGC-IPL thickness measured by SD-OCT can be used to evaluate the structural changes in RGCs. Therefore, in this study, we aimed to detect HCQ-induced retinal toxicity at an earlier stage through the use of SD-OCT device, especially by measuring macular RGC-IPL thickness.

Patients who were using HCQ for the treatment of rheumatic diseases such as rheumatoid arthritis, Sjögren’s syndrome, or connective tissue diseases were enrolled in this study, which was conducted at Antalya Training and Research Hospital between April 2016 and August 2016. A total of 92 eyes of 46 Caucasian female patients (mean age 53.6±8.1 years; range 32 to 69 years) who were taking HCQ were assigned to group 1, while 80 eyes of 40 age-matched Caucasian female control subjects (mean age 56.1±10.7 years; range 34 to 71 years) were assigned to group 2. The study protocol was approved by the Antalya Training and Research Hospital Ethics Committee. A written informed consent was obtained from each patient. The study was conducted in accordance with the principles of the Declaration of Helsinki.

The inclusion criteria for the study were as follows: patients older than 18 years, having a refractive error less than ±5 diopter, capable of undergoing visual field testing and having a signal amplitude in SD-OCT measurement of higher than 6/10. The exclusion criteria were: previous treatment with CQ, presence of disorders which might affect ocular structures such as diabetes mellitus, neurodegenerative diseases, thyroid dysfunction, glaucoma, macular diseases, uveitis or vascular diseases. 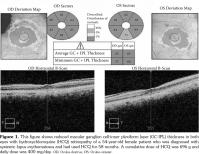 Figure 1. This figure shows reduced macular ganglion cell-inner plexiform layer (GC-IPL) thickness in both eyes with hydroxychloroquine (HCQ) retinopathy of a 54-year-old female patient who was diagnosed with systemic lupus erythematosus and had used HCQ for 58 months. A cumulative dose of HCQ was 696 g and daily dose was 400 mg/day. OD: Oculus dextrus; OS: Oculus sinister.
× 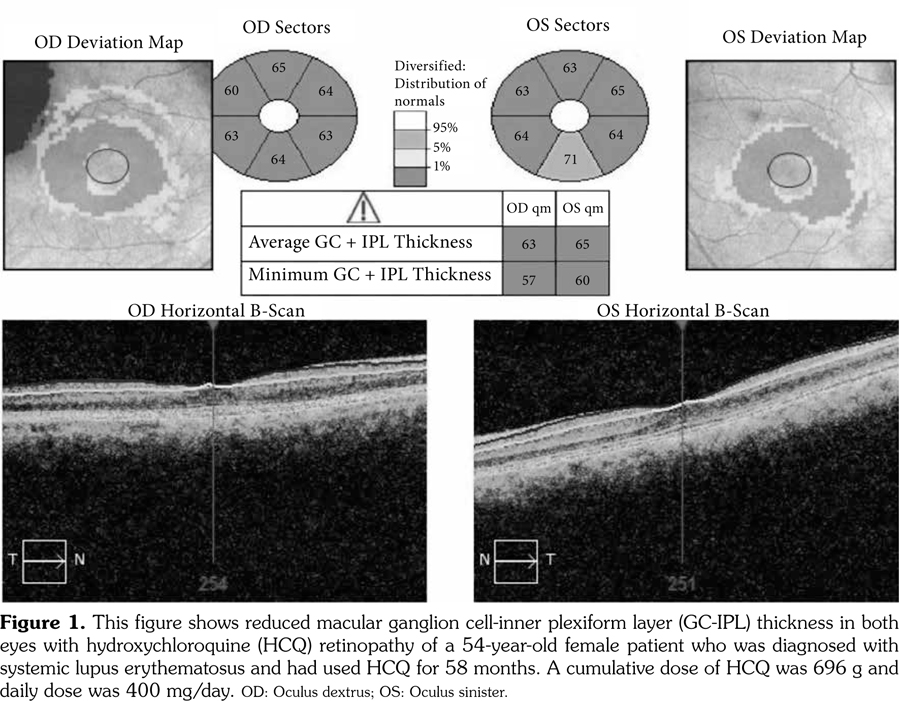 The average RGC-IPL was found to be statistically thinner in group 1. The segmental measurements of RGC-IPL thickness revealed that group 1 had statistically significant thinning in all their macular segments (superior, superonasal, inferonasal, inferotemporal and superotemporal) except inferior segment as compared to group 2 (Table 2). 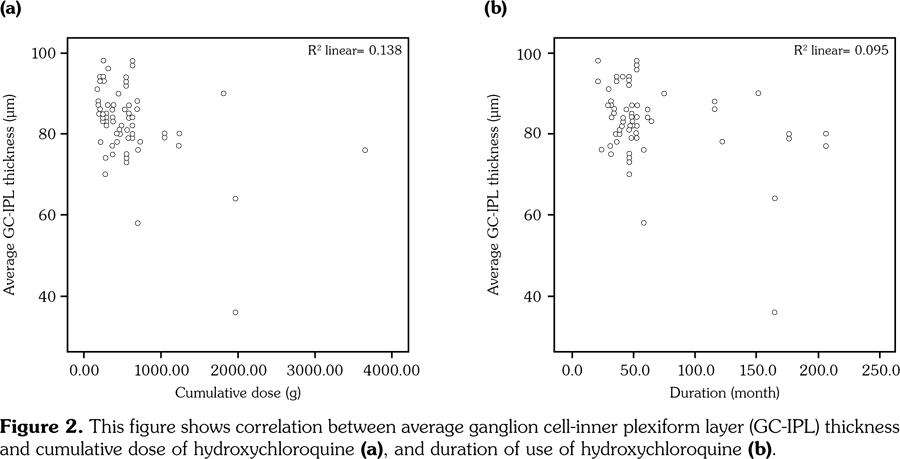 Retinopathy due to HCQ is associated with macular retinal pigmentary changes. The exact mechanism of HCQ-induced toxicity is not fully known. At earlier stages, drug accumulates in the cytoplasm of RGCs and, leads to cell shrinkage and formation of an irregular nucleus, which eventually results in ganglion cell degeneration. At later stages, it leads to the degeneration of photoreceptors and retinal pigment epithelium degeneration by binding on melanin(9,10) and the resulting functional loss in visual field, decreased visual acuity and impairment of color vision.(12) SD-OCT images revealed that patients taking HCQ suffered from the loss of the parafoveal photoreceptor inner segment-outer segment junction and thinning in their outer nuclear layer.(13) Retinal thinning may be an early indicator of retinopathy.(14)

Hydroxychloroquine-induced retinal toxicity is a very rare condition.(15) In a recent study, the rate of retinal toxicity was reported to be 0.65% (n=3995). However, if the drug is used more than five years and the total cumulative dose exceeds 1000 grams, the toxicity rate exceeds 1%.(16) Drug dose of higher than 6.5 mg/kg/day (or 400 mg/day), drug use for more than five years, and a cumulative dose higher than 1000 g are considered as high risk factors for HCQ-induced retinopathy.(17) Toxicity can be evaluated by subjective tests such as visual acuity score, corneal slit lamp examination, fundus examination and automated central perimetry 10-2 test.(4) Amsler grid testing, color vision testing, fluorescein angiography, electrooculogram and full-field ERG are no longer recommended as screening tests.(17) Fundus autofluorescence photography, multifocal ERG and SD-OCT macular measurements are considered as objective tests.(4) It is recommended to use at least one objective test in addition to the subjective tests for screening.(18) In order to discontinue the treatment in patients who are suspected to have HCQ-induced retinal toxicity, it must be confirmed with at least two screening tests including minimum one objective screening test.(19)

Spectral-domain optical coherence tomography images show localized thinning of retinal layers in the parafoveal zone, and may reveal retinal toxicity at an earlier stage before visual field loss occurs.(6,11,20-22) Majority of the previous studies were related to the pathologies associated with the outer retinal segment involving retinal pigment epithelium and photoreceptors.(13,21,23) However, some other studies also demonstrated HCQ- associated damage in the inner retinal segment.(11,19) In our study, we also found statistically significant thinning of RGC-IPL, which is a part of the inner retina; average RGC-IPL thickness, and all segments except inferior segment in the group of patients who were taking HCQ compared to the controls who were not taking the drug. Moreover, the cumulative dose and duration use of HCQ were found to have a statistically significant negative correlation with average RGC-IPL thickness. The findings of our study are consistent with those reported in a similar study recently conducted by Lee et al.(20)

In our study, we did not find any difference between the groups with respect to RNFL thickness. This may be associated with the fact that thinning of RNFL is presented at later stages by the advanced degeneration of RGCs. In our study, we also did not find any difference between the groups with respect to the standard automated perimetry 10-2 results. Our findings demonstrated that HCQ-induced retinal toxicity could be detected at an earlier stage through the measurement of RGC-IPL thickness using SD-OCT before it appeared in visual field tests. Pasadhika et al.(11) reported significantly reduced RGC-IPL thickness with similar findings of perimetry 10-2 results to our study in HCQ-treated patients. The patients included in our study had relatively short duration and lower cumulative dose of HCQ; in other words, had lower risk for HCQ-induced retinal toxicity. Nevertheless, the diminished thickness of retinal layer may be an antecedent finding of retinopathy.

Our study had two important limitations. The first limitation was the low number of patients included in the study; we suggest that it can be supported by further studies with higher number of subjects. The other limitation is the inability to compare the results with basal counterparts before the treatment. This may show the long-term effects of the drug. The HCQ was permitted to be in drug-markets for less than 10 years in our country. So, mean duration of drug’s consumption is not so long in general. This is the main reason for the second limitation of our study. Further studies should be designed accordingly.

In conclusion, we suggest that the measurement of RGC-IPL thickness may become an important objective in screening tests for HCQ-induced retinal toxicity. We need further studies, which should be performed with larger patient populations, to evaluate the retinotoxic effects of antimalarial drugs.