Objectives: This study aims to evaluate the effects of passive smoking on disease activity in female patients with rheumatoid arthritis (RA).
Patients and methods: Among a total of 191 female patients with RA (mean age 59.1±12.5 years; range 21 to 87 years) consecutively recruited, 100 female patients (mean age 56.1±13.4 years; range 21 to 87 years) completed the study with mean 17.3 months of follow-up. Patients were classified according to smoking status: current, never, passive, or ex-smoker. Clinical response between never and passive smokers was assessed by disease- activity score 28 (DAS28)-erythrocyte sedimentation rate (ESR) and C-reactive protein (CRP) (DAS28-ESR and DAS28-CRP) and by the European League Against Rheumatism response criteria.
Results: Among the 100 female RA patients analyzed, the distribution of smoking status was as follows: current (n=3), never (n=55), passive (n=34), and ex-smokers (n=8). There was no difference of DAS28-ESR and DAS28-CRP between never and passive smokers at baseline. At the time of follow-up, the values of DAS28-ESR and DAS28-CRP in never smokers were significantly decreased than those in passive smokers (p=0.019 and p=0.023, respectively). Patients who never smoked showed a trend to have good or moderate European League Against Rheumatism response without statistical significance, compared to passive smokers (52.7% vs. 32.4%, respectively; p=0.060).
Conclusion: This preliminary study implicates that passive smoking might be responsible for higher disease activity in female RA patients and never smoking might induce good clinical response in RA.

Cigarette smoking is one of the several environmental factors that can increase the risk of rheumatoid arthritis (RA). This relationship was revealed through unexpected observations in an oral contraceptive study regarding a close association between hospital referral for RA and cigarette smoking.(1) Since the first report of this association, many cohort and case-control studies have confirmed the association between cigarette smoking and RA-related issues, such as disease development, disease severity, and disease outcomes.(2-5) Additionally, increased disease activity and/or severity and worse outcomes, such as higher prevalence of extra-articular manifestations and radiographic progression, have also been found.(6,7)

There is an increased interest in second-hand smoke as a potential risk factor of RA development and RA disease outcomes. Hutchinson and Moots(8) suggested that passive smoking might be a predisposing factor of RA development among genetically susceptible subjects. Data from the Better Anti-Rheumatic FarmacOTherapy (BARFOT) study indicated that second-hand smoke exposure was prevalent among Swedish RA patients but was not associated with disease activity in patients who had never smoked.(9)

A total of 191 female RA patients (mean age 59.1±12.5 years; range 21 to 87 years) who met the revised criteria for RA as proposed by the American College of Rheumatology in 1987(10) were consecutively enrolled in this outpatient study, which was conducted at Daegu Catholic University Hospital between February 2015 and May 2015. Approximately 17.3 months of follow- up was observed with standard treatment for RA without specific therapeutic intervention according to physicians’ decision dependent on disease activity at each visit. The Institutional Review Board of Daegu Catholic University Medical Center reviewed and approved our study protocol (CR-16-072-L). A written informed consent was obtained from each patient. The study was conducted in accordance with the principles of the Declaration of Helsinki.

Baseline characteristics, including age, disease duration, smoking status (current, never, passive, and ex-smoking), and family history of other rheumatic diseases were assessed at the time of study enrollment. In particular, passive smokers were defined as patients who were exposed to tobacco smoke that was exhaled by a smoker at home or in the workplace, according to their answer to the question “Have you spent time with one or more people who have smoked indoors at home or in your workplace?” This question was modified from a questionnaire from the BARFOT study of early RA disease.(9)

Disease activity measures were recorded at both baseline and follow-up, and they included swollen joint count (SJC), tender joint count (TJC), patient global estimate visual analog scale (VAS, mm), erythrocyte sedimentation rate (ESR, mm/hour), and C-reactive protein level (CRP, mg/L). The serologic activity markers ESR and CRP were measured from blood samples collected at the time of enrollment and at the end of the study. Values of the individual measures of ESR, CRP, patient VAS, SJC, and TJC were calculated in order to estimate DAS28-ESR and DAS28-CRP.(11) In addition, European League Against Rheumatism (EULAR) response criteria were applied to assess clinical response.(12) The absolute values of rheumatoid factor (RF) and anti- cyclic citrullinated peptide (anti-CCP) antibody were obtained by reviewing patients’ medical records. Positivity for these autoantibodies was based on cut-off values of ≥14 IU/mL for RF positivity and ≥17 U/mL for anti-CCP antibody. Use of conventional disease-modifying anti- rheumatic drugs (DMARDs), such as methotrexate, hydroxychloroquine, sulfasalazine, leflunomide, tacrolimus, and corticosteroid, was recorded at both baseline and follow-up. Therapeutic use of biologic DMARDs, such as etanercept, adalimumab, tocilizumab, and abatacept, was also recorded.

The data were described as mean with standard deviation for continuous variables and number with percentage for categorical variables. Differences in categorical variables between never and passive smokers were assessed by chi-square test or, if indicated, Fisher’s exact test. The independent two samples t-test was used to identify differences in continuous variables between smoker groups (e.g., never vs. passive smokers). Comparison among four smoking statuses was performed by one-way analysis of variance. The changes in DAS28-ESR (∆DAS28-ESR) and or DAS28-CRP (∆DAS28- CRP) between baseline and follow-up were analyzed by paired samples t-test. A p-value of <0.05 was considered statistically significant. All statistical analyses were performed using IBM SPSS version 19.0 (IBM Corp., Armonk, NY, USA) software. 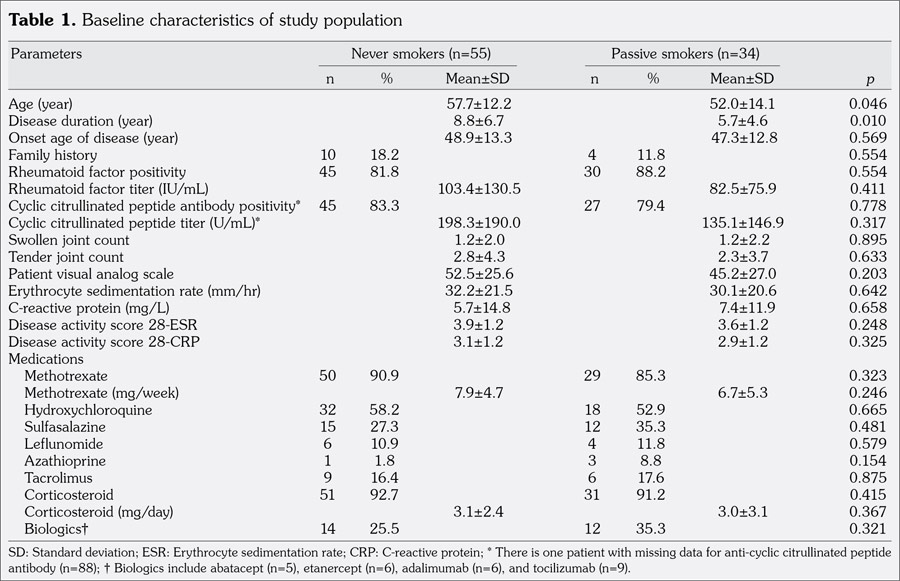 We analyzed 89 never smoking or passive smoking patients to identify any changes in disease activity based on smoking status. ∆DAS28-ESR and ∆DAS28-CRP were significantly different between never and passive smokers (p=0.019 and p=0.023, respectively) (Table 2). However, there were no significant differences of changes in disease activity indexes such as SJC, TJC, patient VAS, ESR, CRP, DAS28-ESR, and DAS28-CRP between passive smokers and current smokers (p>0.05 of all, Table 2).

Table 2. Comparison of disease activity indexes between never and passive smokers at time of follow-up
× 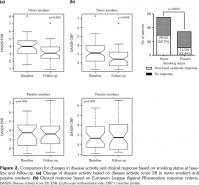 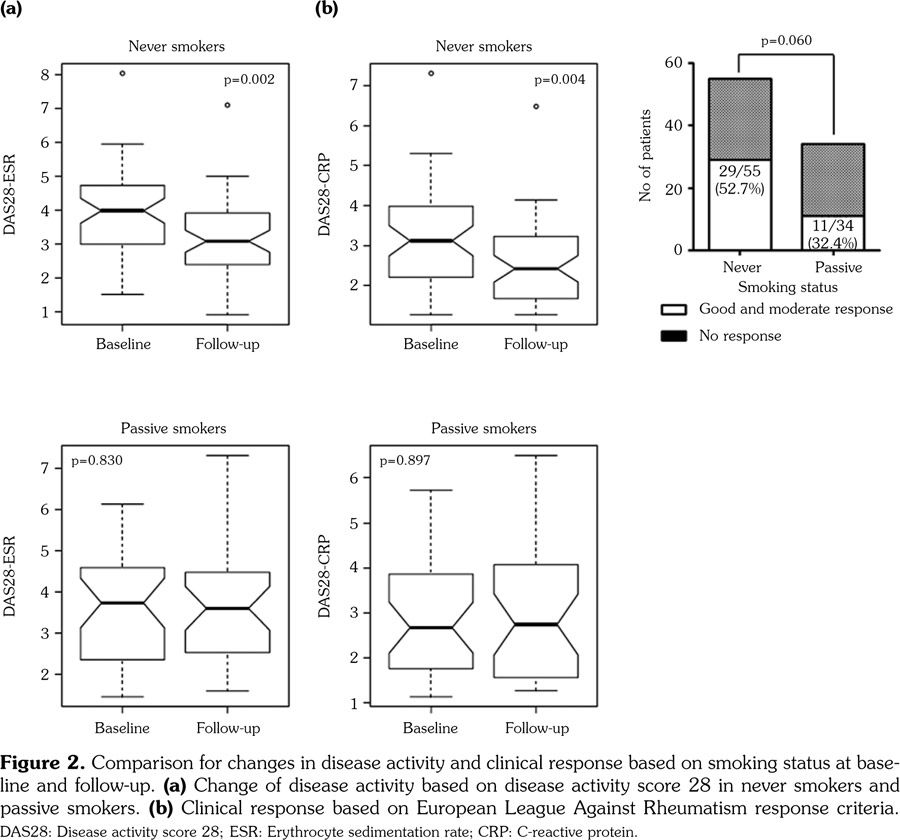 It has been well-established that RA is characterized by synovial inflammation/ hyperplasia, neoangiogenesis, and, ultimately, bone erosion/destruction, which eventually causes structural damage and joint deformity.(13) It is important to understand the underlying mechanisms of anti-CCP antibody production and its relationships to RA pathogenesis because it initiates conversion of arginine to citrulline on peptides, which leads to high-affinity binding to shared major histocompatibility complex epitopes on antigen-presenting cells under local inflammation conditions.(14) Initiation of environment-gene interaction is required for the development of RA, which underwent multiple steps such as altered post-translational regulation and loss of tolerance to self-proteins with citrulline residue, which ultimately progresses to clinical inflammatory arthritis. Among potential environmental risk factors of RA including chronic periodontitis by Porphyromonas gingivalis and the gut microbiome, smoking is a well-established trigger of peptide citrullination.(14) The fact that expression of peptidylarginine deiminase 2 enzyme and citrullinated peptides in the bronchial mucosal tissues and fluids were increased among smokers but not non- smokers supports the idea that there is an intimate interaction between smoking and RA susceptibility.(15,16) In particular, Klareskog et al.(15) showed that a history of smoking was dose- dependently associated with the presence of anti-citrullinated antibodies in RA patients who carried the human leukocyte antigen-DR shared epitope.This indicates that smoking is closely associated with the development of RA.

Passive smoking, also called second-hand smoke, is defined as the inhalation of cigarette smoke that had been exhaled by an active smoker. Exposure to passive smoking has also been associated with a variety of health issues, such as early arterial diseases and Crohn's disease.(17,18) Based on the close relationship between current and previous smoking behavior and risk of RA, passive smoking seems to be an important risk factor of RA development and disease activity.(8,19) However, further evidence of the role of passive smoking in RA risk has not been established. Based on intimate relationship between smoking and susceptibility of RA, we may infer that passive smoking may affect disease activity in RA patients. Previous studies have assessed the association between smoking habit and disease activity and/or severity of RA, revealing that patients who smoked were more likely to have higher disease activity indices and to show more advanced radiographic progression.(6,7) In contrast, Söderlin et al.(9) found that second-hand exposure to tobacco smoke did not influence disease activity in the analyses of the Swedish BARFOT study. They also showed that other baseline characteristics, including disease duration, disease activity, DMARDs, and glucocorticoid treatment, were not statistically different among patients, with the exception that those who had been exposed to second-hand smoking were older than those who had never been exposed (p=0.003). Additionally, there were no differences in the EULAR response between patients who had never smoked and those who were exposed to tobacco smoke across several follow-up time points of three months, six months, 12 months, two years, and five years.

In our study, we attempted to determine whether the smoking pattern, especially passive or never smoking, affects disease activity of RA. The main finding of this study is that there was significant reduction in DAS28-ESR and DAS28-CRP levels in never smokers, whereas passive smokers did not show changes in these activity indexes between baseline and follow-up. In addition, never smokers showed higher EULAR clinical response than passive smoking groups, although statistical significance was not noted in our study (p=0.060). Considering the effect of treatment regimens on disease activity, the prevalence of DMARDs, corticosteroid, and biologics used in this study between never smokers and passive smokers was not significantly different during the follow-up period (Table 1). This may suggest that it is difficult to deduce potential influence of treatment agents on both groups. These findings were not consistent with the data from the Swedish BARFOT study.(9) However, cigarette smoking, particularly current smoking, was found to be closely associated with higher disease activity markers such as ESR, CRP, and DAS28 and severe clinical features including radiographic bone erosions or rheumatoid nodule, compared to never smoking,(6,7) indicating that passive smoking may be likely to affect the disease activity in RA.

A retrospective analysis of data from 192 countries found that disease burden from exposure to second-hand smoke affected 35% of all female non-smokers who had been exposed to second-hand smoke in 2004.(20) In Korea, data from a community-based prospective cohort of 1,980 participants, known as the Korean Genome and Epidemiology Study, revealed that 21.5% of non-smoking females had been exposed to second-hand smoke.(21) Another single cohort study of 1,645 Korean RA patients reported that 30.8% of patients had been exposed to second- hand smoke, and exposure was more common among females (31.3%).(22) These values are compatible with the number of passive smokers in this study (34.0%). Meanwhile, the prevalence of passive smoking in RA patients seems to be higher than expected in the general population. Although we do not have an explanation for why prevalence of passive smoking was estimated to be higher in RA patients, management of and concern for passive smoking should be prioritized to control disease activity and health outcomes in RA patients.

Our study has several limitations. First, our questionnaire relied on self-reported data regarding exposure to second-hand smoke. Therefore, the reliability of the second-hand smoke measure might be low, although the questionnaire was borrowed from a previous study.(9) To improve upon this limitation, quantitative and qualitative assessments, such as duration and frequency per exposure period, are needed in future studies. Second, our sample size might not be large enough to draw robust conclusions. Nevertheless, to our knowledge, this study offers the first evidence of a relationship between passive smoking and clinical RA characteristics in an Asian population. Further research with a more carefully designed questionnaire and a larger sample is needed.