Fibromyalgia syndrome (FMS) is a disorder characterized by widespread musculoskeletal pain, accompanied by fatigue, sleep disturbance, anxiety, and mood disorders.(1) Paresthesia, cognitive difficulties, dizziness, weakness, and a subjective feeling of swelling are also frequent symptoms of the disease. Notably, in individuals with FMS, there is a widespread and immediate alteration in the sympathetic/ parasympathetic balance. Furthermore, anxiety, which generally leads to misdiagnosis, is very common in fibromyalgia, and has been found to be related to the severity of pain in FMS.(2) Despite considerable attention and clinical investigation, the mechanisms responsible for initiating and perpetuating FMS remain unknown or poorly understood. In the past decade, multiple advances in neuroimaging have been applied as a means of investigating potential causative mechanisms in FMS.

In neuropsychiatric research, cerebral blood flow (CBF) has been used as an indicator of brain function.(3) Historically, research on CBF was seriously limited by the invasive nature of the available measurement techniques, such as nitrous oxide inhalation and intracarotid injection techniques.(4) However, recently, regional changes in brain perfusion and metabolism have been documented through the use of positron emission tomography and single photon emission computed tomography.(5-7) In addition, transcranial and extracranial color duplex Doppler ultrasonography are non-invasive techniques that are simple to administer, and may constitute an acceptable alternative for the evaluation of cerebral hemodynamic changes. Modern duplex scanners allow determination of the blood flow volume in an extracranial vessel by combination of mean blood flow velocity and vessel diameter or cross sectional area assessments.(8) A parallel relationship between CBF and non-specific arousal, as mediated by the brainstem reticular activating system, has previously been reported.(9) It is thought that non-specific arousal is a biological substrate for anxiety.(10) In contrast, anxiety-related factors, including sympathetic stimulation, increased blood viscosity, and reduced carbon dioxide levels, have been shown to decrease CBF.(11) Thus, anxiety is associated with both cerebral vasodilatory and vasoconstrictive mechanisms. It is not surprising that investigators have observed contrasting results for anxiety-related changes in CBF.(12)

When taking into consideration that FMS is closely related to psychogenic factors and alterations of functions of the autonomous nervous system, we hypothesized that a number of alterations may take place in blood flow rates through the internal carotid artery (ICA) and vertebral artery (VA) in patients with FMS, in keeping with intracranial vascular hemodynamic changes reported previously.(10,13-15) We hypothesized that: (i) stronger changes of ICA and VA blood flow velocities would be observed in patients with FMS than in healthy controls, and (ii) that a positive association between the magnitude of the hemodynamic response and the severity of clinical pain, depression, and anxiety would be observed. Therefore, in this study, we aimed to evaluate CBF using color duplex Doppler ultrasonography in patients with FMS.

The study, which was conducted at Fırat University Hospital between January 2015 and November 2015, included 30 female patients with FMS (mean age 42.3 years; range 22 to 59 years) and 30 female healthy controls (mean age 39.6 years; range 22 to 56 years). All FMS patients met the 1990 and 2010 American College of Rheumatology classification criteria for FMS.(16,17) Blood pressure measurement was performed prior to sonographic evaluation. Patients with a systolic blood pressure <140 mmHg and a diastolic blood pressure <90 mmHg were eligible for inclusion. Patients with systemic inflammatory rheumatic diseases; acute diseases and/or conditions leading to clinical confusion (fracture, malignity etc.); cooperation problems; hypertension; diabetes mellitus and other endocrinologic diseases; alcohol and drug addictions; ICA plaques; cerebrovascular diseases; chronic neurological diseases cardiac failure; a psychiatric disorder involving a history of psychosis, current suicide risk or attempt within the past two years, left-handedness or who were pregnant were excluded. The study protocol was approved by the Fırat University Faculty of Medicine Ethics Committee. All the participants consented to participant. The study was conducted in accordance with the principles of the Declaration of Helsinki.

Severity of pain, fatigue, and the patient’s and physician’s global assessments of disease were assessed on a visual analog scale. Algometric assessment was performed for patients with fibromyalgia, with the tender point count and chronic widespread pain duration recorded. The Symptom Severity (SS) scale(17) and Fibromyalgia Impact Questionnaire (FIQ) scores were obtained in all subjects. Hamilton Anxiety Rating Scale (HAM-A) and Hamilton Depression Evaluation Scale (HAM-D) were also administered. For the HAM-A scale, scores between 6 and 14 points and scores greater than 15 were interpreted as minor and major anxiety, respectively. When analyzing responses from the HAM-D scale, scores between 8 and 17 points, between 18 and 24, and above 25 were defined as mild, moderate, and severe depression, respectively.(18,19)

Color duplex Doppler ultrasonography imaging was performed with an EPIQ 5 unit (Philips Healthcare, Bothell, WA, USA) equipped with a multi-frequency linear probe (3-12 MHz) for both patient groups, in the supine position. The entirety of the common carotid arteries, carotid bifurcations, ICAs (as distal as possible), and VAs were scanned in transverse and longitudinal planes with both the B-mode and color Doppler mode. Flow velocities and flow volumes were measured from the common carotid arteries in the center stream, approximately 2 cm below the bifurcation, on the grayscale B-mode image. Internal carotid artery measurements were made approximately 2 cm above the bifurcation, beyond the bulb widening. The VA measurements were taken from intravertebral segments of the artery. Measurements were made with a constant 60° insonation angle, minimum wall filter, and a transmitter output of 100%. Peak systolic velocity, end diastolic velocity, flow volume, and luminal diameters were noted. All study examinations were performed by the same radiologist with 10 years of experience. Patients with plaques and hypoplastic VAs were excluded. 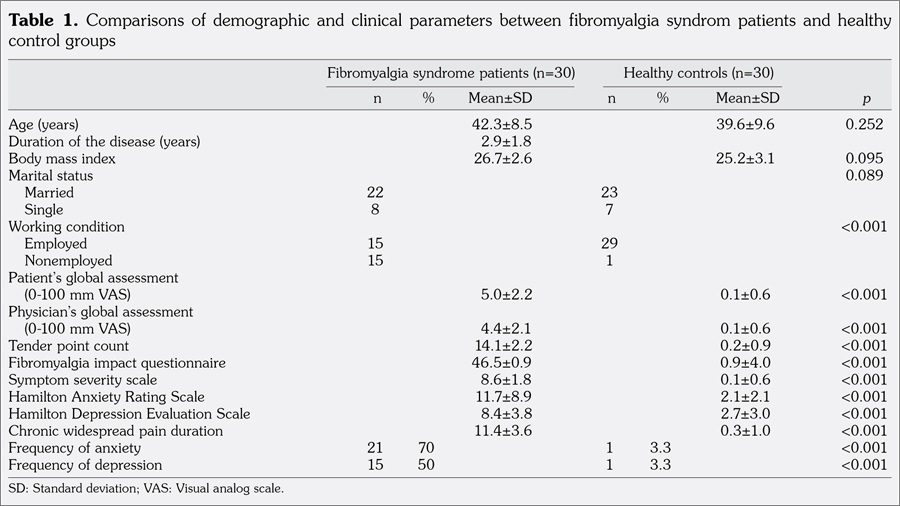 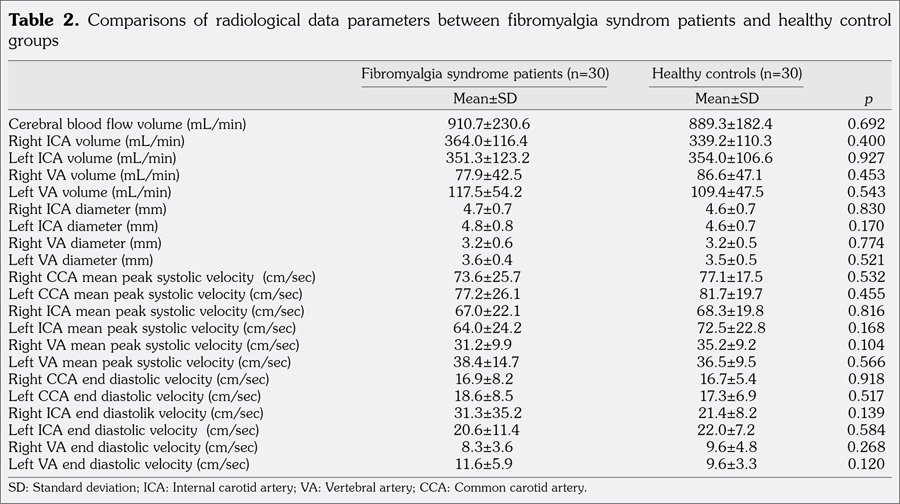 Furthermore, no statistically significant differences in VA flow volume and velocity were noted between the two groups. However, a significant correlation between SS parameter and the CBF volume in FMS patients was determined.

Functional coupling between neural metabolism and CBF enables mapping of cerebral function according to hemodynamic response with neuroimaging methods, particularly functional magnetic resonance imaging.(20) A number of functional magnetic resonance imaging studies have investigated the local distribution patterns of CBF in patients with FMS during somatosensory and pain processing. FMS patients, when compared to healthy equivalents, exhibit a lower threshold of pressure stimulation for blood flow response in a large part of the nociceptive matrix.(21) Under nonpainful warmth stimulation, patients with FMS exhibit an enhanced blood flow response in the prefrontal and supplementary motor cortices, insula, and anterior cingulate.(22) In patients with FMS, moderate pressure stimulation results in a blood flow increase in the sensory- motor cortex, insula, cingulate, and basal ganglia; in contrast, this response is almost completely restricted to the somatosensory cortex in healthy controls.(23) Brain mapping studies have provided substantial insight into the neural basis of pain augmentation occurring in FMS. However, in addition to spatial distribution patterns, it may be worthwhile noting the dynamic dimension of the CBF response related to nociception. This is justified, in particular, by the well-documented time-dependence of interindividual differences in hemodynamic response.(24-26)

The close relationship between brain function, CBF, and cerebral metabolism at rest has been the topic of interest for a number of researchers.(3,27,28) In studies of both community and clinic groups, fibromyalgia has been strongly associated with anxiety and depressive symptoms, with approximately one-third of patients reporting major current problems with anxiety or depression.(16,29,30) CBF during acute anxiety is dependent on the interplay between central (arousal) and peripheral (sympathetic tone, carbon dioxide, etc.) factors. Extensive literature regarding the psychophysiology of anxiety indicates that wide variations exist between and within subjects. Indeed, it is likely that this will also prove to be true for cerebral circulation. Therefore, changes in CBF associated with anxiety are likely to depend on a number of these factors.(31) To our knowledge, only one other study has evaluated CBF using transcranial color duplex Doppler ultrasonography in the literature. Duschek et al.(32) reported that anterior cerebral artery blood flow increases in patients with FMS, when compared to controls. However, they did not evaluate the ICA or VA. It is well known that CBF and CBF velocity exhibit an increase during mental activity, and it is hypothesized that patients with FMS generally show increased brain activity; consequently, an increased blood supply and greater flow volume may be expected.(33) On the one hand, Chen et al.(27) reported that CBF decreases in patients with FMS. Variability of CBF in patients with FMS might be related to the variance in imaging methods and coexisting diseases. We observed in this study that the CBF volume and flow rates of FMS patients were not significantly higher than those of normal subjects, despite the fact that 50% of patients with fibromyalgia had depression and 70% had anxiety. These results may arise from a variety of secondary hemodynamic factors in relation to chronic anxiety and depression in fibromyalgia patients. Furthermore, it may be due to our small patient population. Therefore, further research is required including larger sample of fibromyalgia patients.

We evaluated the relationship between the magnitude of the hemodynamic response and the severity of clinical pain, depression and anxiety in patients with FMS. We observed a significant correlation between CBF volume and SS scale indicating disease severity in fibromyalgia patients. However, in this study, CBF volume was not correlated with emotional disturbance related with HAM-A and HAM-D, and functional disability related with FIQ. In addition to frequent depressive signs in panic disorder, preexisting somatic symptoms, including morning stiffness, depression, fatigue, insomnia, and reduced mental performance in FMS, may account for higher scores in FMS patients. However, the interplay between these symptoms and CBF volume remains unclear. CBF volume may be related to the temporal progression of FMS or to FMS- mediated insufficiencies in the cardiovascular and pulmonary system, which may alter the heart rate and respiratory rate. Further research focused on clarifying these relationships is required.

Although many methods have been used to evaluate CBF in psychiatric patients, color duplex sonography is non-invasive, non-radioactive and easily applicable, making it an attractive option for quantifying CBF volume. However, a number of limitations exist in sonographic CBF volume measurements. Notably, the reliability of sonographic examination depends greatly on the skill and experience of the examiner. Furthermore, in patients with high carotid artery bifurcation, ICA plaques, stenosis, or an abnormal ICA morphology (kinking or tortuosity), sonographic CBF measurements cannot be performed.(34)

This study has some limitations. First, the number of participants in both groups was not determined by power analysis before the study. Second, an additional patient control group would be beneficial for the study. Finally, radiological measurements were made by only one researcher who was not blinded.

In conclusion, patients with FMS exhibited no increase in CBF volume, ICA flow, or VA flow, and CBF volume only correlated with SS scale among other clinical parameters reflecting disease severity. Color duplex Doppler ultrasonography is a non-invasive and easily applicable method, which assesses reliably the global CBF volume, and it should be considered as a primary methodology for further FMS studies. CBF volume may be associated with the clinical progression and features of FMS, and further research is required to examine these relationships.