Systematic lupus erythematosus (SLE) is an autoimmune disease that is associated with systemic inflammation and a hyper-coagulable state. SLE affects predominantly females of reproductive age. Many patients with SLE suffer cardiovascular complications, such as coronary artery disease and stroke. A recent study reported that 13% of SLE patients suffer from atherosclerotic diseases, including angina, myocardial infarction, and peripheral vascular disease.(1)

Myocardial infarction (MI) is rare in SLE patients under the age of 35; and this is reflected by its underrepresentation in the literature.(2) Nikpour et al.(3) suggested that the severity of coronary complications may correlate with SLE severity and progression. To the best of our knowledge, currently, there are no known reported cases of recurrent attacks of myocardial infarction unmanageable with multiple stent placements and coronary artery bypass grafting in a patient under 35-years- old. There is a case of a 37-year-old male with SLE who had/experienced two episodes of MI described by Dr. Piao and his colleagues.(4) In this article, we present a case of a young male patient who developed nine episodes of acute MI requiring nine percutaneous coronary interventions and five quintuple-coronary artery bypass graftings.

A 25-year-old young male patient with a 14-year history of SLE and associated antiphospholipid syndrome, and eight episodes of acute MIs and multiple percutaneous transluminal angioplasties and stent placements presented with worsening chest pain for one day. Patient reported left-sided chest pain that was dull in quality, 7 out of 10 in intensity, and initially occurred intermittently, then progressively became constant, radiating to his right jaw and bilateral upper extremities. The chest pain was exacerbated by inspiration and movement and had no relieving factors. It was associated with diaphoresis, dyspnea, and generalized myalgia.

On admission, troponin was 0.05 ng/mL and electrocardiogram revealed sinus tachycardia with peaked T-waves in leads I, aVL, and V5-V6; and inverted T-waves in leads III and aVF. Echocardiogram demonstrated left ventricular hypertrophy with an ejection fraction of 55%. Selective coronary angiography (Figure 1) disclosed a 70% stenosis of the left internal mammary artery graft to the left anterior descending coronary artery and a 99% stenosis in the distal left anterior descending artery. Patient was treated with coronary angioplasty and two drug-eluting stents, reducing stenoses to 0% per final angiography (Figure 2). 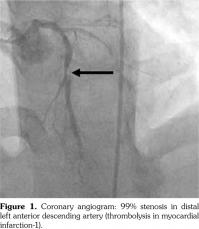 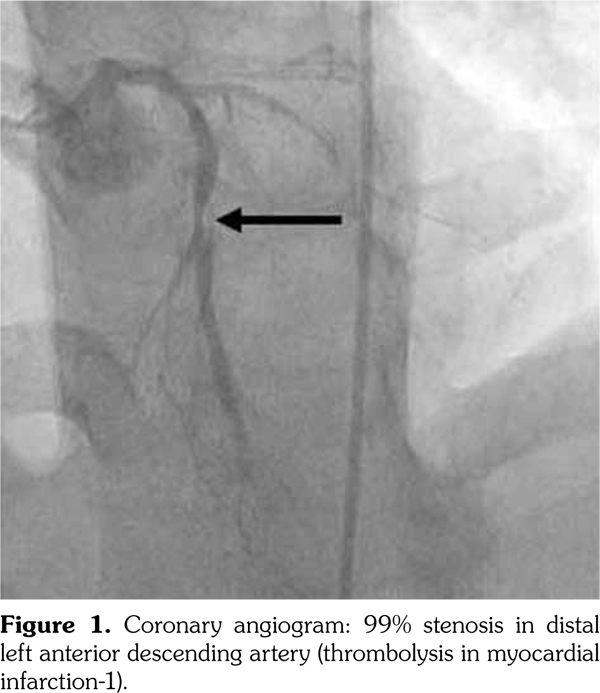 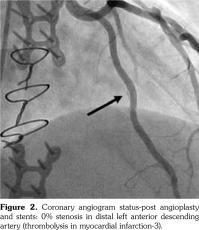 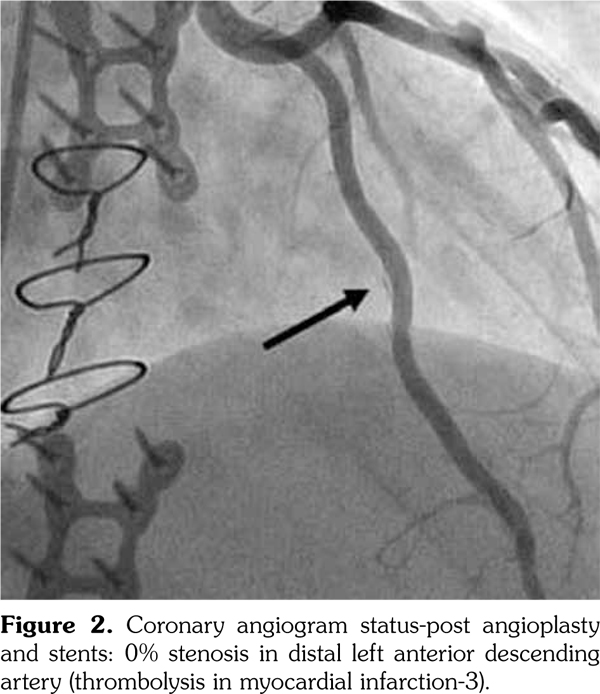 As an autoimmune disease, SLE is well known to cause endothelial dysfunction and systematic inflammation, which accelerates atherosclerosis. Antiphospholipid syndrome produces a hypercoagulable state leading to the development of premature atherosclerosis and MI.(5) Steroid is postulated to induce proatherogenic and hyperlipidemic states.(6) Therefore, patient’s long- term use of steroid for SLE management likely contributed to acute MI attacks. Our case highlights the importance of proactive management of both traditional and non-traditional risk factors for MI in patients with SLE, including those below the age of 35.