Protective Effect of Tetrandrine in a Rabbit Model of Osteoarthritis

Objectives: This study aims to investigate the antiinflammatory effect of tetrandrine in a rabbit model of osteoarthritis.
Materials and methods: The cruciate ligaments and medial menisci of 36 female New Zealand white rabbits (each weighing 2.0-3.0 kg) were resected. Six weeks after surgery, the animals were randomly divided into three groups (n=12 in each): tetrandrine (20 mg/kg/day), indomethacin (3 mg/kg/day) and control (saline 10 mL/day) groups. After 14 days of treatment, the results were assessed by macroscopic observation, histological evaluation, measurement of the levels of interleukin-1 beta, tumor necrosis factor-alpha and nitric oxide in the synovial fluid and messenger ribonucleic acid expression of metalloproteinase-3 in synovia.
Results: In the tetrandrine group, the pathological changes were more attenuated than in the control group. Levels of interleukin-1 beta, tumor necrosis factor-alpha, nitric oxide and metalloproteinase-3 in the synovial fluid or synovium were all significantly suppressed in the tetrandrine group compared with the control group. There were no significant differences between the tetrandrine and indomethacin groups.
Conclusion: The results of this study demonstrate that tetrandrine may protect against the development of experimentally induced osteoarthritis.

Osteoarthritis (OA) is characterized by progressive cartilage degeneration that can ultimately lead to a complete loss of joint cartilage. Although OA is classified as a non-inflammatory arthropathy, inflammation has been shown to play a significant role in disease progression. Several studies have shown that cartilage destruction in OA is the result of the activity of cytokines, such as interleukin- 1β (IL-1β), tumor necrosis factor-alpha (TNF-α), prostaglandins (PGs), nitric oxide (NO), proteases and other inflammatory mediators.(1-3)

Tetrandrine is a major bisbenzylisoquinoline alkaloid isolated form Stephania tetrandra S. Moore, which has been used for 2,000 years in China as an antirheumatic herbal drug. Similar to standard drugs, tetrandrine inhibits the production and activation of ILs, TNF-α, PGs, cycloxygenase-2 (COX-2) and T cells under experimental conditions to reduce inflammation.(4-6) However, most of the previous studies have focused on rheumatoid arthritis. Therefore, in this study, we aimed to investigate the antiinflammatory effect of tetrandrine in a rabbit model of OA.

Thirty-six female New Zealand white rabbits (each weighing 2.0-3.0 kg) were included in the study, which was conducted between February 2016 and June 2016 at Wenzhou Medical University. Animal experiments were performed in accordance with internationally accredited guidelines and approved by the local laboratory’s Institutional Animal Care and Use Committee. After anesthesia with 10% chloral hydrate (4 mL/kg), the cruciate ligaments and medial menisci were resected using the Hulth technique to establish OA models.(7) Following recovery from anesthesia, all animals were allowed to be freely active within their cages. Six weeks after the surgery, the animals were divided into three groups (n=12 in each): tetrandrine (20 mg/kg/day), indomethacin (3 mg/kg/day) and control (saline 10 mL/day) groups. During the next 14 days, the rabbits were observed daily to monitor their health status.

After 14 days of treatment, the rabbits were sacrificed and the femoral condyles were collected for observation. After macroscopic examination, isolated samples were fixed with 10% buffered formalin, embedded in paraffin, and decalcified with 20% ethylenediaminetetraacetic acid solution for further histological evaluation. Serial sections (5 μm) through the entire specimen were prepared and stained with hematoxylin and eosin. The severity of the osteoarthritic lesions was graded on a scale of 0-14 by three independent observers using the Mankin scoring system as follows: Mankin score 0, normal cartilage with a smooth surface and a regular zonal distribution of chondrocytes; Mankin score 1-4, cartilage surface shows fibrillations and a superficial loss of proteoglycans, but the zonal structure is intact; Mankin score 5-8, cartilage samples have clefts reaching down to the middle cartilage zone, and clusters of proliferating chondrocytes are present; and Mankin score ≥9, severely affected cartilage samples with clefts reaching down to the deep zone, in which the tangential zone is lost and chondrocyte clusters are present.(8)

Immediately after the rabbits were sacrificed, the synovial fluid (SF) was aspirated from the affected joints. The levels of IL-1β and TNF-α in the SF were measured using enzyme-linked immunosorbent assay kits (Shenggong Company, Shanghai, China), and all assays were performed according to the manufacturer’s instructions. NO was detected using the Griess method.(9)

After sacrifice, synovia of the operated knee was harvested for measurement of messenger ribonucleic acid (mRNA) expression of metalloproteinase-3 (MMP-3). Primers were designed and synthesized. Total RNA was extracted and amplified by reverse transcription polymerase chain reaction (Shenggong Company, Shanghai, China). The relative levels of mRNAs were normalized to the mean gray value of β-actin and then expressed as relative mRNA value for each specimen.

In the control group, the cartilage of the femoral condyles appeared to have significant defects including osteophytes. In the tetrandrine and indomethacin groups, cartilage lesions associated with OA were clearly seen, but the severity was milder than in the control group.

Figure 1. Histological findings of femoral condyles (a) in control, (b) indomethacin and (c) tetrandrine groups (H-E¥400).
× 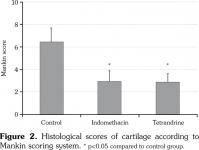 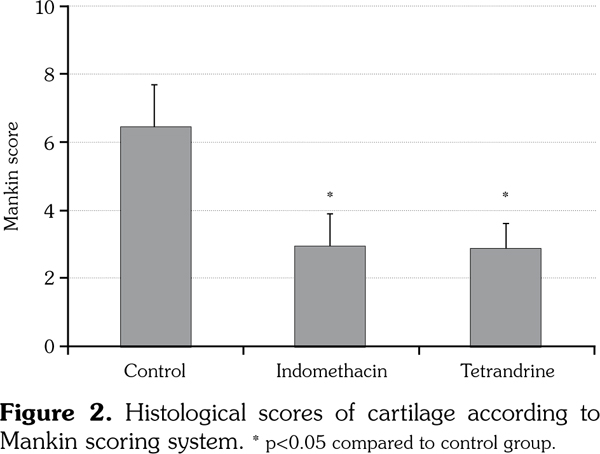 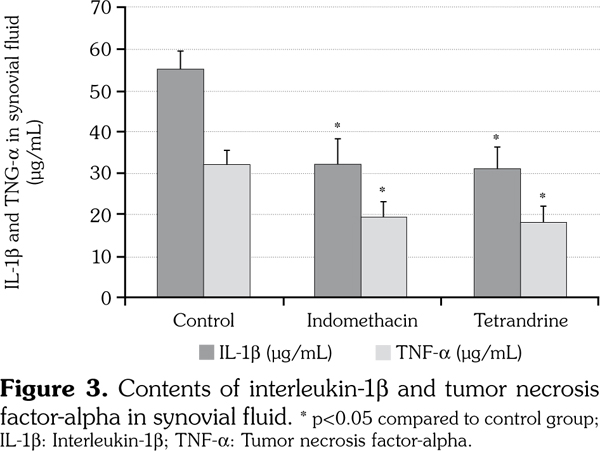 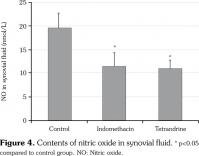 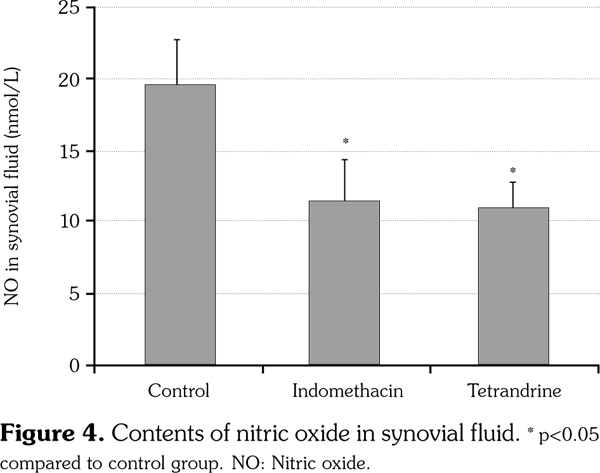 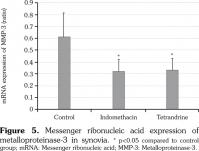 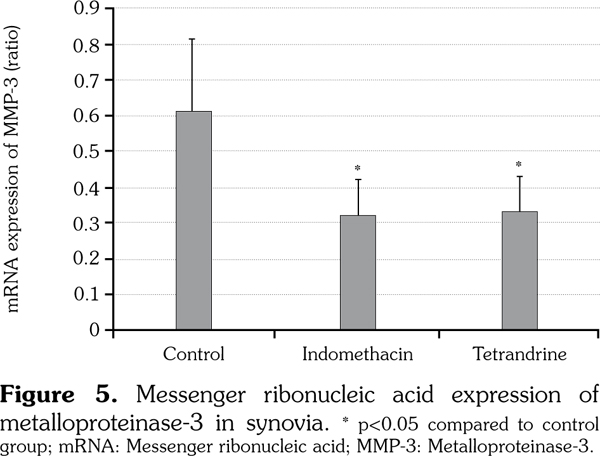 Osteoarthritis, the most common cause of pain and disability in the elderly, is a complex disease characterized by bone remodeling, synovial inflammation, and cartilage loss. Generally, OA is an articular cartilage injury caused by an imbalance in the degradation and synthesis of chondrocytes, extracellular matrix, and subchondral bone. Studies have confirmed that several biological factors are involved in the development of OA, including IL-1β, TNF-α, MMPs and NO.(1-3)

Non-surgical modalities for OA include weight loss, exercise, non-steroidal antiinflammatory drugs, analgesics, and intra-articular hyaluronic acid [AU: correct?].(10) Since inflammation has been shown to play a significant role in OA progression, there have been several studies in animal models of OA regarding the use of antiinflammatory drugs for treatment. IL-1 receptor antagonists (anakinra), anti-TNF-α monoclonal antibody (infliximab) and selective COX-2 inhibitor (celecoxib) have all shown significant therapeutic effects.(11-13)

In this study, we found that the levels of IL-1β, TNF-α, NO and MMP-3 in the SF or synovia were all significantly suppressed in the tetrandrine group compared with the control group. In the tetrandrine group, the Mankin score in the articular cartilage improved significantly compared with the control group. This indicates that tetrandrine might protect against early osteoarthritic cartilage damage by delaying cartilage degeneration, as was also shown by the results of our macroscopic and histological analyses. However, since there was no significant difference in the two active treatment groups, it is expected that tetrandrine would have the same protective effect on articular cartilage, as indomethacin in a rabbit OA model.

There may be two major possible reasons for these findings. First, IL-1β is a cytokine involved in the processes of cartilage degradation. In response to IL-1β, chondrocytes secrete TNF-α, neutral MMPs and NO. IL-1β and TNF-α localize with increased levels of MMPs, and IL1β has been shown to up-regulate MMP expression in normal human chondrocytes.(14,15) Tetrandrine may directly inhibit IL-1β and TNF-α expression by blocking the nuclear translocation of nuclear factor kappa B.(13,16) Second, tetrandrine may suppress articular inflammatory response by inhibiting COX-2 inactivation.(6,17) COX-2 induction was observed in the chondrocytes of OA joints, and this produces PGs. PG E2 has been shown to accelerate cartilage degeneration by inhibiting biosynthesis of glycosaminoglycans.(18,19) Selective COX-2 inhibitors are effective for OA treatment because they attenuate synovial inflammation and cartilage destruction. Blocking PG E2 prevents cytokine-induced cartilage damage and increases synthesis of glycosaminoglycans in OA cartilage.

In conclusion, our results suggested that tetrandrine may have a potential therapeutic role in the management of OA due to its inhibition of the IL-1β-induced release of TNF-α, MMP-3 and NO. This novel therapeutic strategy may be a promising treatment option for OA.