Fear-avoidance (FA) beliefs are significantly associated with the experience of pain.(1) These beliefs are thought to be related with the development of chronic pain syndrome in some individuals with musculoskeletal pain.(2) As fear and anxiety were found to be natural responses to impending pain, a FA model of exaggerated pain perceptions was postulated which depends on cognitive-behavioral accounts.(3) Briefly, fear and anxiety generated by cognitively exaggerated pain sensation may influence the behaviors of people. For instance, in patients with low-back pain, FA beliefs may preclude return to work related with reduced physical activity.(4,5)

In this study, we aimed to compare FA beliefs of RA patients with OA of hand patients and FM patients and evaluate its relationship with RA activity and duration.

The study, which was conducted at Kartal Dr. Lütfi Kırdar Training and Research Hospital between November 2015 and February 2016, included 206 patients with RA (34 males, 172 females; mean age 49 years; range 20 to 72 years) who fulfilled the 2010 American College of Rheumatology (ACR)/European League Against Rheumatism RA Classification Criteria,(12) 57 patients with FM (57 females; mean age 48 years; range 20 to 71 years) who fulfilled the 2010 ACR Preliminary Diagnostic Criteria for FM,(13) and 50 patients with OA of hand (4 males, 46 females; mean age 43 years; range 43 to 77 years) who fulfilled the 1990 ACR Classification Criteria for OA of Hands.(14) FA beliefs were measured by The Fear-Avoidance Belief Questionnaire (FABQ), originally described by Waddell et al.(15) The questionnaire has two components including FA beliefs about work and physical activity. Main determinants of the scale are pain related fear and pain severity. The FABQ is accepted as one of the best available instrument to measure fear and avoidance behavior related with physical activity and work.(16) In our study, we measured FA beliefs with modified version of The Fear- Avoidance Belief Questionnaire (mFABQ).(17) In the modified version of the questionnaire, two items which evaluate only back pain were excluded. The questionnaire includes four items on FA beliefs about physical activity and 10 items on FA beliefs about work. Here, all items were rated on a seven point scale (0-6). The validity and reliability of the questionnaire have been reported in patients with chronic musculoskeletal pain(17) and the Turkish version of mFABQ was previously validated.(18) Three different scores were obtained from the questionnaire: mFABQ physical activity score was derived from the ratings of four items on FA beliefs about physical activity. mFABQ work score was derived from the ratings of 10 items on FA beliefs about work. Finally, mFABQ total score was sum of these two scores. All scores dichotomized as low (mFABQ physical activity score [0-6], mFABQ work score [0-12] and mFABQ total score [0-18]) or high (mFABQ physical activity score [7-24], mFABQ work score [13-60] and mFABQ total score [19-84]) according to medians of a previous study.(19) All patients were literate and none of the patients had pathological finding in the examinations that may influence the questionnaire. Demographic features, duration of education, smoking habits, occupation, body mass index, visual analog scores of pain, fatigue and patients global health, duration of disease related symptoms, comorbid illnesses (hypertension, hypothyroidism, hyperthyroidism, cardiovascular diseases, coronary artery diseases, cerebrovascular diseases, chronic renal disease, chronic obstructive pulmonary disease, diabetes mellitus), and number of lost days being unable to work due to pain during last month were collected from all patients. Counts of tender and swollen joints of the patients with RA were detected with physical examination by the same rheumatologist. C-reactive protein and sedimentation rates of all patients and rheumatoid factor and anti-citrullinated protein antibodies of the patients with RA were obtained from the medical database of the hospital. Treatments for RA at the time of study were also obtained. Drug treatments for RA were classified as no treatment, monotherapy with methotrexate, monotherapy with other disease modifying drugs (DMARDs) (hydroxychloroquine, leflunomide, sulfasalazine), DMARD combination including methotrexate, DMARD combination without methotrexate, biologic monotherapy with tumor necrosis factor inhibitors (TNFi) (adalimumab, certolizumab pegol, etanercept, golimumab, or infliximab), biologic monotherapy with non-TNFi (abatacept, rituximab, or tocilizumab), biologic and DMARD combination including TNFi, biologic and DMARD combination including non-TNFi. Corticosteroid treatment for RA was classified into three subclasses according to dosage: no steroid treatment, treatment with prednisolone equivalent <5 mg, 5-10 mg and >10 mg daily. The activity of RA was evaluated with disease activity score 28 with sedimentation rate.(20) Disease activity score 28 was classified as remission, low, moderate and high disease activity according to ACR/European League Against Rheumatism provisional definition of remission in RA for clinical trials.(21) RA patients were divided into two groups related to remission status. Herein, disease activity score 28 of 3.2 was accepted as cutoff value. Remission group involved patients with remission and low disease activity. Additionally, non-remission group involved patients with moderate and high disease activity. Furthermore, patients with RA were divided into two groups according to disease duration. In compliance with 2015 ACR Guidelines for the Treatment of RA, cutoff value of disease duration for separating the patients as early or established RA was accepted as six months.(22) Occupation of the patients was classified according to exertion levels as outlined in the Standards of United States Department of Labor as defined in the Dictionary of Occupational Titles.(23)

The study protocol was approved by the Kartal Dr. Lütfi Kırdar Training and Research Hospital Ethics Committee. A written informed consent was obtained from each patient. The study was conducted in accordance with the principles of the Declaration of Helsinki. 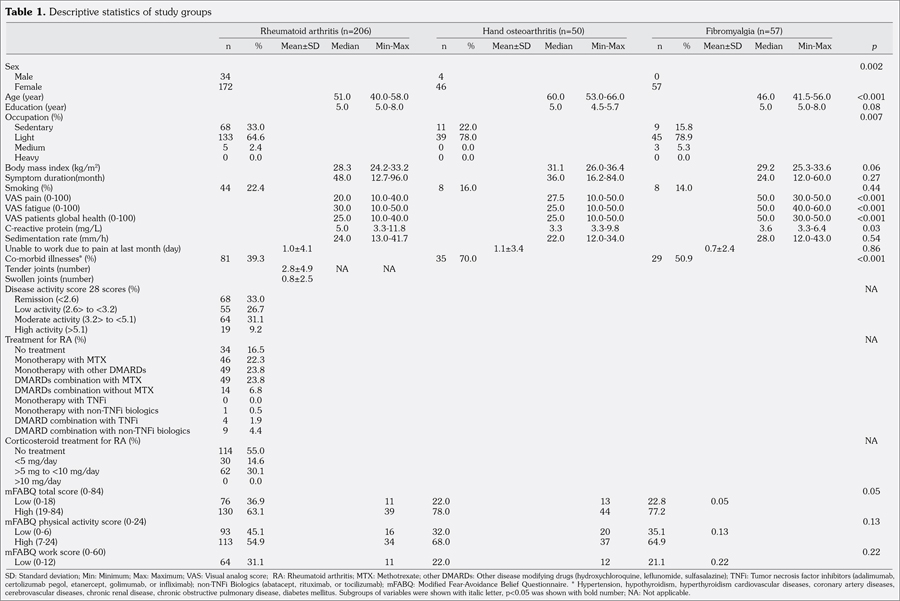 Demographic properties were similar in the remission and the non-remission groups (Table 2). Also, frequency of rheumatoid factor and anti- citrullinated protein antibodies positivity were similar in both groups.

Table 2. Descriptive statistics of patients with rheumatoid arthritis classified according to disease activity
× 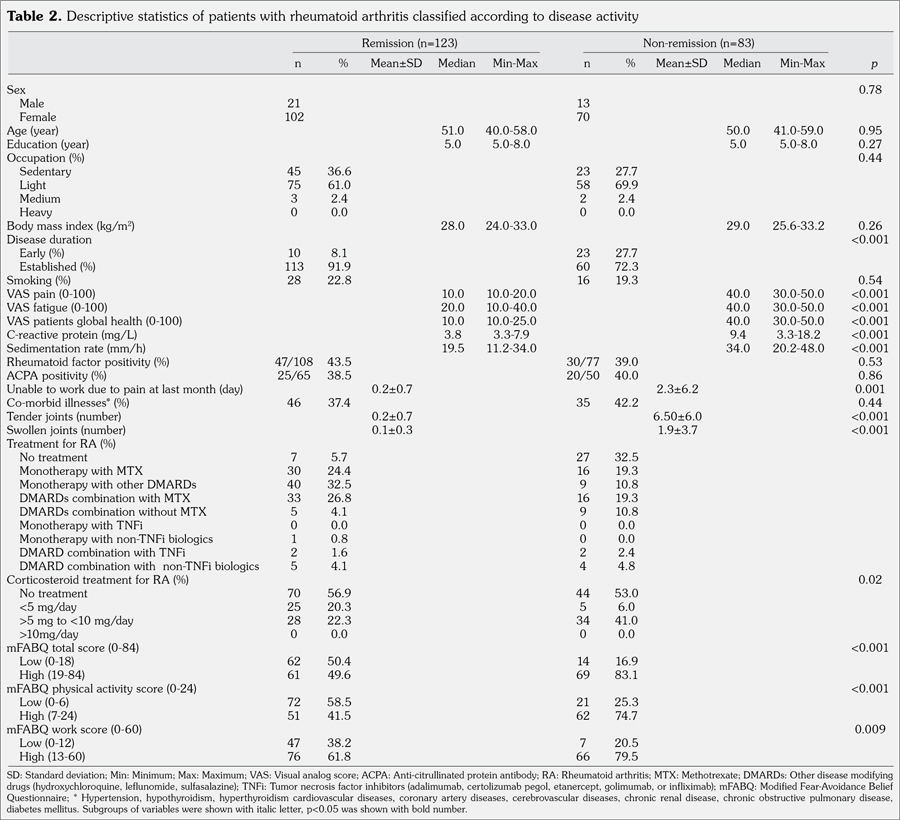 Table 3. Descriptive statistics of patients with rheumatoid arthritis classified according to disease duration
× 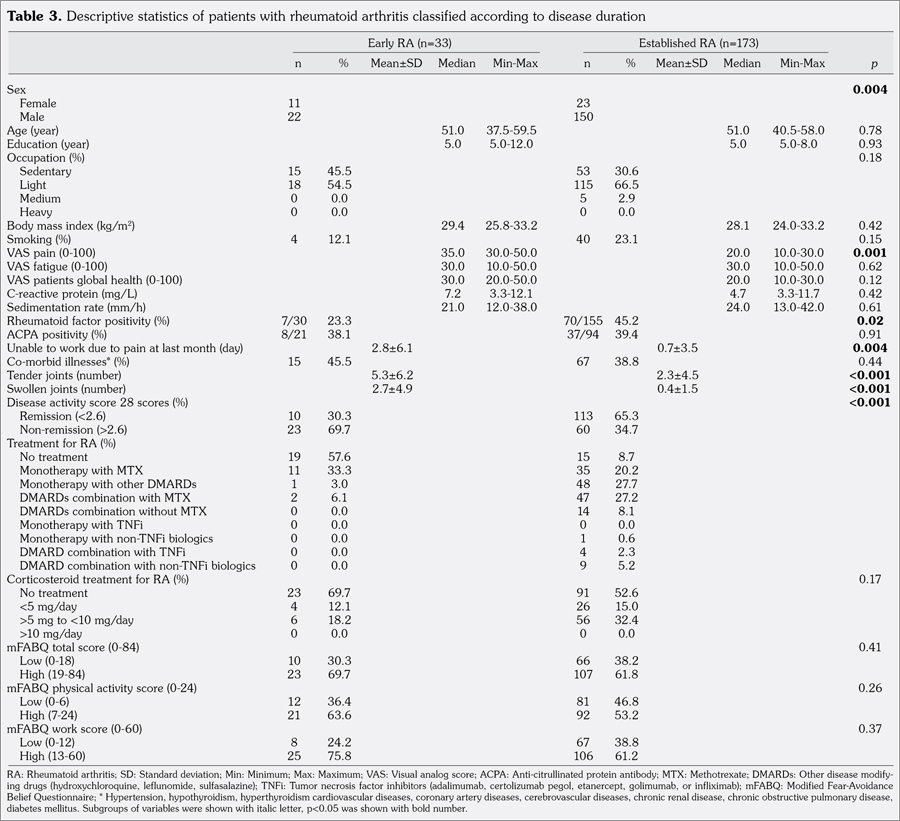 We found higher mFABQ scores in non- remission RA group. Moreover; VAS scores, number of tender or swollen joints and number of lost days being unable to work due to pain during last month were higher in non-remission group. Increased pain intensity in active disease and escalating damage, suffering and functional loss beliefs due to increased number of tender or swollen joints may be the reason for underlying high pain-related fear.(27) So, compatible with the literature, our findings showed that disease activity was related with escalating FA beliefs. Therefore, higher FA beliefs in non-remission RA patients may preclude return to work, related with reduced physical activity and chronic pain syndrome.(1,28)

Unlike the literature, our results did not show any association between disease chronicity and increased FA beliefs.(3) In our study, there was no difference in mFABQ scores according to the disease duration of RA patients. The reason for this may be our established RA group’s having lower disease activity. Thus, our findings may indicate that only disease chronicity in RA do not increase FA beliefs without high disease activity. Even though early disease group had higher disease activity, disease duration might not be sufficient to cause cognitive alterations for revealing FA beliefs.

As increased disease activity in RA was related with increased FA beliefs, increased work loss and decreased physical activity, intensive treatment with treat to target strategy(29) may increase remission rate and help to combat against FA beliefs. Moreover, an inverse relationship was found between knowledge of pain neurophysiology and the level of FA.(30) Consequently, pain education(31) in patients with RA may provide an effective strategy to manage FA and related disability in RA patients, improving treatment outcomes. Furthermore, as FA beliefs originate from cognitive-behavior accounts, physician-patient communication that centralizes the impact of RA on quality of life(32) and guides the treatment according to patients’ expectations and perceptions(33) may also help to combat against FA beliefs.

Our study has some limitations. Firstly, a limited number of patients with early diagnosed RA were enrolled. Secondly, we did not evaluate the effect of RA treatments on FA beliefs in RA. Also, we did not consider health quality indices. Furthermore, this was a cross-sectional study not designed to demonstrate the alterations of FA beliefs in the different stages of the disease.

Lastly, we did not evaluate FM in patients with RA and OA.

In conclusion, FA beliefs of patients with RA were similar with OA of hand patients and FM patients. However, increased RA activity was related with increased FA beliefs, particularly in established disease. Thus, intensive treat to target strategy and patient-oriented treatment methods focused on cognitive-behavior accounts may help in combatting against FA beliefs of RA patients. Further studies evaluating the pathophysiology and treatment of FA beliefs of patients with RA are warranted for effective pain management in RA.