Uric acid acts as an antioxidant in endothelial cells and maintains vascular dilatation during oxidative stress.(1) Recent data have shown that hyperuricemia prevalence is increasing worldwide.(2) This increase is especially pronounced in developed countries, and the additional benefits of therapeutic intervention for hyperuricemia have recently been indicated. Inefficient excretion by the kidneys associated with the overproduction of urate accounts for <10% of hyperuricemia cases in the general population. By contrast, inefficient excretion of uric acid, accounting for >90% of the cases, results from renal insufficiency or medications that impair renal urate clearance.(3) At least two-thirds of patients with hyperuricemia may remain asymptomatic, and current evidence does not support treating asymptomatic hyperuricemia.(4)

Because hyperuricemia is a critical health problem, the Wilson criteria are used for its routine screening. This requires a thorough understanding of the course of the disease, because patients may present with either a recognizable latent or early symptomatic stage. The clinical tests used for screening are easy to perform and interpret, and are reliable, accurate, acceptable, sensitive, and specific. After screening, an accepted treatment should be started in the event of positive results. From the viewpoint of preventive medicine, regional awareness of the background morbidity of hyperuricemia as well as exploration of the complete spectrum of demographic and biological markers likely associated with hyperuricemia are essential. Sex differences in the prevalence of and risk factors associated with hyperuricemia among specific elderly occupational populations require clarification. Thus, in this study, we aimed to explore the potential condition-related sex differences to understand the overall pathogenesis of hyperuricemia among the elderly agricultural and fishing population in Taipei, Taiwan.

Complete details regarding the study design and execution have been described elsewhere.(5) Fasting blood samples were drawn from participants through venipuncture by well- trained clinical nurses. Overnight-fasting serum and plasma samples were frozen (-20 °C) until analysis. Face-to-face interviews along with a structured questionnaire were administered by the nurses during each visit.

Hyperuricemia was diagnosed when serum uric acid levels were ≥7 mg/dL for males or ≥6 mg/dL for females.(6,7) In addition, participants with ≥40 U/L serum alanine amino transferase (ALT) were classified as those with elevated ALT levels.(5) The definitions of type 2 diabetes and hypertension were based on 1999 World Health Organization criteria and the Seventh Report of the Joint National Committee on Prevention, Detection, Evaluation, and Treatment of High Blood Pressure, respectively.(8,9) Participants with a history of type 2 diabetes or hypertension and regularly receiving medication were classified as known cases. The following clinical conditions were used for defining obesity: high body mass index (≥25 kg/m(2)), hypercholesterolemia (total cholesterol ≥200 mg/dL), hypertriglyceridemia (triglycerides ≥200 mg/dL), low high-density lipoprotein (HDL) <35 mg/dL, high blood urea nitrogen (BUN) ≥20 mg/dL, and high creatinine levels (≥1.4 mg/dL).(5) The study protocol was approved by the Fu-Jen Catholic University Ethics Committee. A written informed consent was obtained from each patient. The study was conducted in accordance with the principles of the Declaration of Helsinki.

Table 1. Sex- and age-specific prevalence of hyperuricemia in study population
× 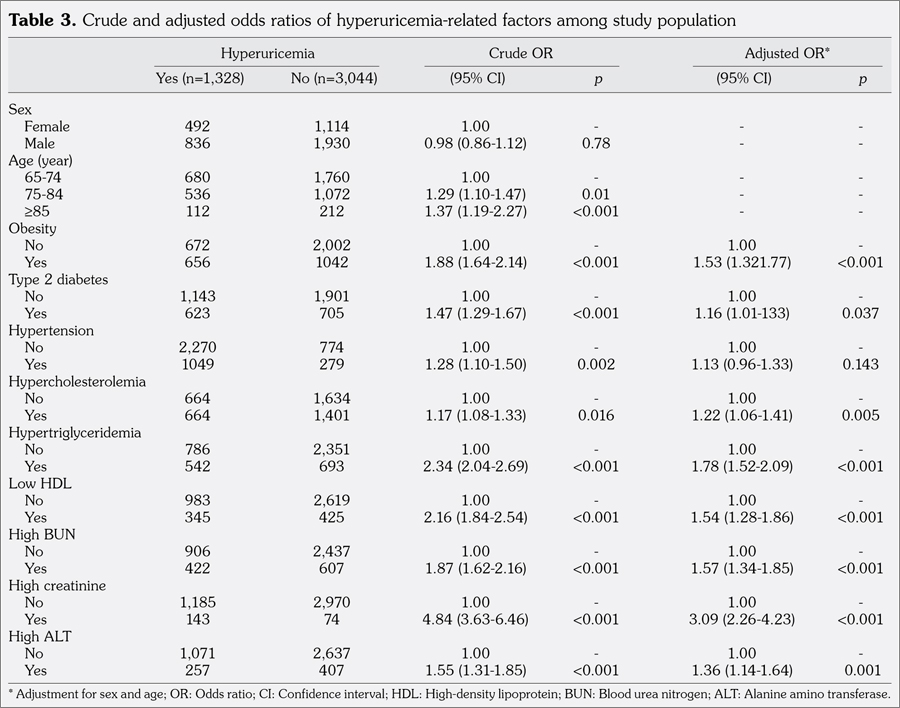 Social problems resulting from the division between rich and poor have led to the coexistence of unsustainable lifestyles among approximately one billion people in the developed world and unacceptable poverty in another one billion people, largely from developing countries.(5) In this study, we used an age- and sex-based approach to estimate the morbidity of hyperuricemia in an elderly agricultural and fishing population. The prevalence of hyperuricemia in males and females was 30.2% and 30.6%, respectively. In multiple logistic regression analysis, age, obesity, type 2 diabetes, hypercholesterolemia, hypertriglyceridemia, low HDL level, and high BUN, creatinine, and ALT levels were independent predictors of hyperuricemia. A crucial benefit of a uric acid screening program is that gout and other chronic complications are often detected in apparently healthy individuals through elevated serum uric acid levels because the related screening tests are commonly included in serum chemistry panels.(5) The relative significance of these results is often overlooked when the serum uric acid levels are deemed slightly abnormal. In addition, the differences observed in factors associated with hyperuricemia in each age subgroup imply that multiple strategies for the health promotion of elderly people are necessary for reducing the risk of elevated serum uric acid levels. 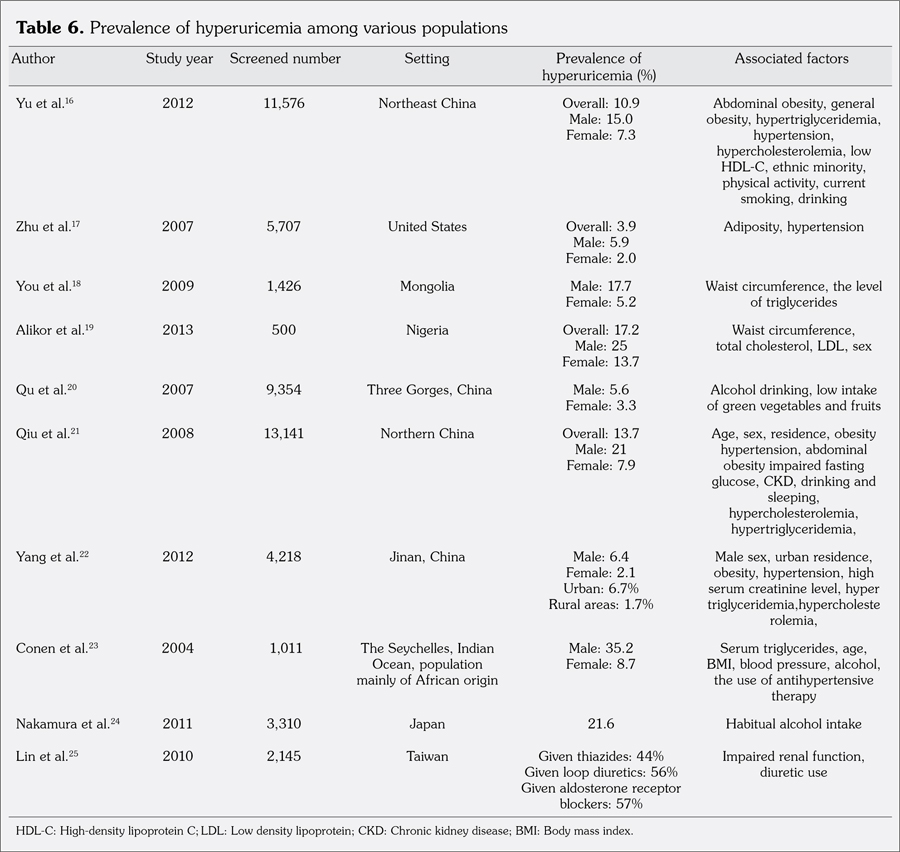 Older age was a significant risk factor for hyperuricemia even in our elderly study population. This finding is consistent with the results of previous hospital- and community- based studies for general and occupational populations.(11,21-23) The mechanism underlying the slightly lower prevalence of hyperuricemia in males aged ≥85 than in those aged 75-84 years remains unclear; nevertheless, in females, the increase in hyperuricemia prevalence with increasing age may be explained by postmenopausal changes in the endocrine system and estrogen levels.(22)

Among patients with chronic hepatitis, fructose load may cause a substantial increase in serum uric acid levels.(5,7) Furthermore, serum uric acid levels are high in patients with chronic liver lesions. Our results regarding the significant association between high serum ALT level and hyperuricemia are similar to those reported in other studies.(5,29) However, because of the cross-sectional design of our study, we could not determine the extent to which the increase in serum ALT level occurs before hyperuricemia development.

Uric acid levels are high among renal failure patients because of decreased renal clearance.(1) A decrease in the glomerular filtration rate contributes to hyperuricemia, frequently observed in patients with chronic kidney disease.(30) Here, we observed a positive association between serum creatinine level and hyperuricemia, consistent with other studies.(11,31) Although evidence-based studies have indicated that serum uric acid itself may harm patients with chronic kidney disease by increasing inflammation and progression, the topic remains controversial.(31) In addition, we observed that BUN is strongly associated with hyperuricemia after adjustment for confounding factors. This suggests that BUN is an indicator of deterioration caused by hyperuricemia. A study indicated that despite significantly influencing serum uric acid, creatinine, and BUN levels, diuretic dose failed to emerge as the strongest predictor of serum uric acid in multiple regression analyses. This implied that increased diuretic dose may indirectly reflect the deterioration of renal function and clinical status.(32)

A major limitation of this study was potential selection bias because the screened elderly population was selected from only one area; this bias may have affected the estimated prevalence of and risk factors for hyperuricemia. Nevertheless, given our relatively large sample size, the statistical power was sufficient to effectively evaluate the presence of any sex differences between the various associated risk factors for hyperuricemia after adjusting for confounding factors. Second, we evaluated only elderly participants, who might have characteristics differing from those of the general population. This subpopulation is more susceptible to hyperuricemia than other populations in Taiwan. Third, some nonrespondents, who did not return for biochemical examination, may have had more prevalent hyperuricemia; thus, the prevalence may have been underestimated. Finally, our measurements were conducted at a single time point; hence, they cannot be used to reflect the effects of long-term exposure to the various risk factors, which may critically affect hyperuricemia. Thus, prospective longitudinal analogous studies are required, the results of which may complement the cross-sectional findings of this study.

In conclusion, in this study for prevalence of and risk factors for hyperuricemia in our elderly agricultural and fishing population, we noted several sex differences with regard to factors including age, obesity, type 2 diabetes, hypercholesterolemia, hypertriglyceridemia, low HDL level, and high BUN, creatinine, and ALT levels. Future studies are required to elucidate the temporal sequence of events typically leading to hyperuricemia and further explore the sex differences in the factors causing hyperuricemia among the elderly agricultural and fishing population.

The authors certify full disclosure of all affiliations or financial involvements with any organization or entity with a financial interest in or financial conflict with the subject matter or materials discussed in this manuscript, within the past five years and in the foreseeable future (e.g., employment, consultancies, honoraria, stock ownership or options, expert testimony, grants or patents received or pending, and royalties).