The Effect of Anti-Tumor Necrosis Factor-Alpha Treatment on Muscle Performance and Endurance in Patients With Ankylosing Spondylitis: A Prospective Follow-Up Study

Ankylosing spondylitis (AS) is a chronic rheumatic condition characterized by inflammatory back pain and stiffness. Tumor necrosis factor plays an important role in the pathogenesis of AS disease that is accompanied by the loss of muscle strength. Several studies in humans have shown a relationship between proinflammatory cytokine levels and muscle mass.(1,2) In AS patients, restrictions in joint mobility, particularly of the spine, have been well documented.(3,4) Cachexia or muscle loss, the accelerated loss of skeletal muscle in the context of a chronic inflammatory response, is a common feature of other rheumatic conditions, although body composition studies have not consistently demonstrated cachexia in AS populations.(5-7)

When reduced physical activity and chronic inflammation are taken into consideration, AS patients are at risk of accelerated muscle loss. By leading to reduced muscle power, resistance, and physical activity, the loss of muscle mass contributes to the restriction in functional independence and daily living activities. Although the mechanism of muscle loss is not clear, it has been thought that anti-tumor necrosis factor-alpha (anti-TNF-α) causes muscle loss by stimulating muscle protein destruction and inhibiting myogenic differentiation.(3) In contrast, there are also studies showing no change in the muscle mass of AS patients.(6) To the best of our knowledge, the effects of anti-TNF-α treatment on muscle strength and endurance have not been studied in patients with AS yet. Therefore, in this study, we aimed to evaluate muscle performance by using isokinetic dynamometer before and at third month of anti-TNF-α treatment in ankylosing spondylitis patients.

This prospective study was conducted between June 2015 and June 2016 at Medical Faculty of Mustafa Kemal University. The study group comprised 30 AS patients (23 males, 7 females; mean age 39.3±8.6 years; range 18 to 45 years) treated with anti TNF-α. These patients were disease-modifying antirheumatic drugs-resistant or intolerant, with AS diagnosed by a physiatrist in accordance with the classification criteria for axial spondyloarthropathy. A control group was formed of 30 healthy individuals (23 males, 7 females; mean age 39.1±8.8 years; range 18 to 48 years) matched with the study group for age, sex, and body mass index.

Patients with severe disease activity, disability, renal or liver diseases, uncontrolled hypertension, heart failure, malignancy, pregnancy, other disorders (e.g., thyroid, parathyroid disorders, osteoporosis), and usage of drugs that can affect skeletal metabolism, any history of trauma and/or surgery of the lower limbs were excluded. The study was approved by the Local Ethical Committee of Medical Faculty of Mustafa Kemal University. A written informed consent was obtained from each patient. The study was conducted in accordance with the principles of the Declaration of Helsinki.

Before the isokinetic measurement, the subjects were seated on the dynamometric chair and stabilized with waist and chest belts in 90° sitting position. After performing five submaximal warmup contractions, concentric PT values of the quadriceps and hamstrings at 60° and 180° per second angular velocities, total work (TW), hamstring strength to quadriceps strength ratio, and muscle endurance were evaluated. The isokinetic test protocol included five repeats at 60° per second, 30 seconds of rest, and 15 repeats at 180° per second.

Statistical analyses were conducted with IBM SPSS software version 20.0 (IBM Corp., Armonk, NY, USA). Data were expressed as mean ± standard deviation. After checking normal distribution with the Kolmogorov-Smirnov test, independent t-test was used to compare the baseline parameters between the treatment and control groups. Paired t-tests and Wilcoxon signed rank tests were used to compare baseline and third month after treatment values where appropriate. The results were for those who completed treatment. Statistical significance was accepted as p<0.05.

Clinical and laboratory features of the participants are presented in Table 1. There was no statistically significant difference between the groups for age, sex, height, weight, and body mass index. Disease duration and duration of medication use for AS group were mean 7.5±7.9 years and mean 4.1±5.2 years, respectively. Before the anti-TNF-α treatment, 20% (n=6) were taking nonsteroidal anti-inflammatory drugs only, 76.6% (n=23) were taking nonsteroidal anti-inflammatory drugs + sulfasalazine, and one patient was taking methotrexate treatment only. Overall, 15 patients (50%) were treated with infliximab, 12 (40%) with adalimumab, and three (10%) with etanercept. 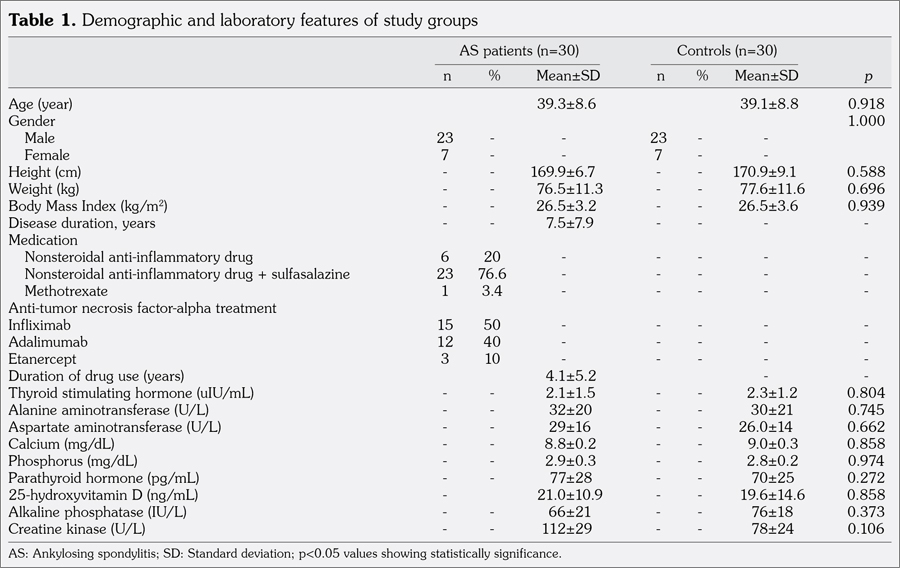 In this study, a comparison was made before and at third month of anti-TNF-α treatment for the strength and endurance values of the extensor and flexor muscle groups around the knee in AS patients with axial involvement who had started this treatment because disease activity had not been suppressed by disease-modifying antirheumatic drugs. Three months after the start of anti-TNF-α treatment, a statistically significant increase was determined in the 60°/ second and 180°/second angular velocity PT values in the knee flexor and extensor muscle groups in the AS patients. In addition, a statistically significant increase was determined in the 180°/second angular velocity hamstring strength to quadriceps strength (H/Q) ratios and FI values.

Stasko et al.(15) showed that muscle strength was reduced by TNF-α increasing nitric oxide and oxygen radicals through neural type nitric oxide synthesis. Another known effect of TNF-α on muscles is muscle atrophy. Long-term exposure to TNF-α activates the ubiquitin-proteasome pathway with a catabolic effect, thereby causing protein loss and reduced cell size. This reduction in muscle size is reflected in reduced muscle strength.(16) In the current study, the baseline isokinetic test values of the AS patients were lower than those of the healthy control group. In addition, an improvement was seen in the disease activity and isokinetic test values with the anti- TNF-α treatment. These results of the negative effect of TNF-α on muscle are supported by data in literature.

Muscle strength is measured more efficiently with tests performed with low angular velocities, while high angular velocities are useful for the detection of functional status and endurance of the muscle. There is no standard model for isokinetic test measurement in AS. In this study, 60°/second and 180°/second angular velocities were used. In studies where the muscle strength of AS patients has been measured with isokinetic dynamometer, the muscle strength has been shown to be low compared to the healthy population.(11) Langen et al.(3) reported that TNF-α, which is a pro- inflammatory cytokine, plays an important role in the pathogenesis of rheumatismal diseases and has been held responsible for the pathogenesis of muscle loss in AS patients. It is thought that TNF-α causes muscle loss by stimulating the destruction of muscle protein and inhibiting myogenic differentiation.

Pain, inflammation, and stiffness play a major role in muscle performance loss in AS patients. Muscle weakness develops in the first week of non-movement and increases rapidly. Reduced physical activity or inactivity of muscles results in atrophy and this reduced functional capacity is caused by reduced neuromuscular performance. In a study of inflammatory diseases, a reduction in dynamic and isometric muscle strength was seen in the early stages of disease. Catabolic stimuli including cytokines, such as interleukin-6, interleukin-1 and TNF-α, increase together with inflammation and each of these causes muscle protein destruction.(11) In the current study, the findings that the 60°/second and 180°/second angular velocity PT values of the flexor and extensor group muscles were lower in the AS patients than in the control group before anti- TNF-α treatment support this view.

Another reason for reduced muscle performance is fatigue, which is a constitutional symptom. Muscle fatigue is responsible for loss of motor control, and changes in posture and balance. When the relationship between fatigue and postural changes is taken into consideration, fatigue may play a significant role in the postural changes in AS patients. A limited number of studies in the literature have reported that reduced muscle resistance has been observed in AS. Accordingly, muscle weakness in AS patients may be the cause or the result of fatigue. In the current study, although the FI values of the flexor and extensor muscles of the AS patients were lower than those of the control group, the difference was not statistically significant. Following anti-TNF-α treatment, although the FI values were high compared to the baseline, only the FI increase in the flexor group muscles was statistically significant. With the increased muscle strength following anti-TNF-α treatment, increased TW is expected. In the current study, the TW values were found to increase in parallel with the increased muscle strength.

There are some limitations to this study. The first is that no power analysis was applied before the study. Secondly, it is debatable whether a three-month period of treatment is sufficient to evaluate muscle performance. Thirdly, AS patients with active disease (Bath Ankylosing Spondylitis Disease Activity Index >4) were included in the study. Finally, the level of physical activity affected by muscle performance was not calculated. In the current study, although all the AS patients were given posture exercises and breathing exercises, they were not questioned as to whether they had performed the exercises regularly. Even though this lack of questioning the exercise status can be seen as a significant limitation of the study, as the exercises given did not include strengthening exercises, the increased muscle strength and endurance that was seen within three months can be attributed to the muscles having been protected from the effect of TNF-α. As there was an improvement in functional activity after anti-TNF-α treatment, the treatment could have contributed to this effect.

In conclusion, in addition to the functional disability, destruction of the axial spine and peripheral joints and ankylosis in AS patients, muscle weakness and reduced endurance are further possible problems that may be faced by these patients. The results of this study have shown that both functional limitations and performance and endurance of muscles can be improved with anti-TNF-α treatment in AS patients.