An Unusual Cause of Oligoarthritis and Erythema Nodosum: Idiopathic Granulomatous Mastitis

Idiopathic granulomatous mastitis (IGM) is an unusual chronic inflammatory panniculitis of breast characterized by non-caseating granulomas.(1) Although IGM is a rare disease, it is highly important to consider IGM in differential diagnosis of breast lesions due to its imitation of breast cancer both clinically and radiologically.(2) Disease has a chronic course; it begins with a tender mass in breast, proceeding to fistulae, sinus tract, and scar formation. There are many theories about the etiology of IGM, including autoimmunity, trigger with trauma, prolactinemia, hormonal, alpha-1 antitrypsin deficiency, and infections; however, these theories have not been proven yet.(3) It has been rarely associated with oligoarthritis and erythema nodosum (EN) in the literature.(4-10)

In this article, we discuss the diagnostic, clinical, and therapeutic approach to a unique case with granulomatous mastitis, EN, and arthritis that may be of interest to clinicians who are not readily familiar with this condition.

A 32-year-old multiparous female patient was admitted to dermatology department with one- month history of a palpable mass in breast and multiple red tender nodules on extremities and polyarthralgia (Figure 1a, b). Medical history of the patient was insignificant. There was no history of parturition, breastfeeding, or oral contraceptive drug use in the past two years. A written informed consent was obtained from the patient. 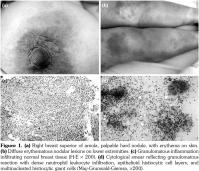 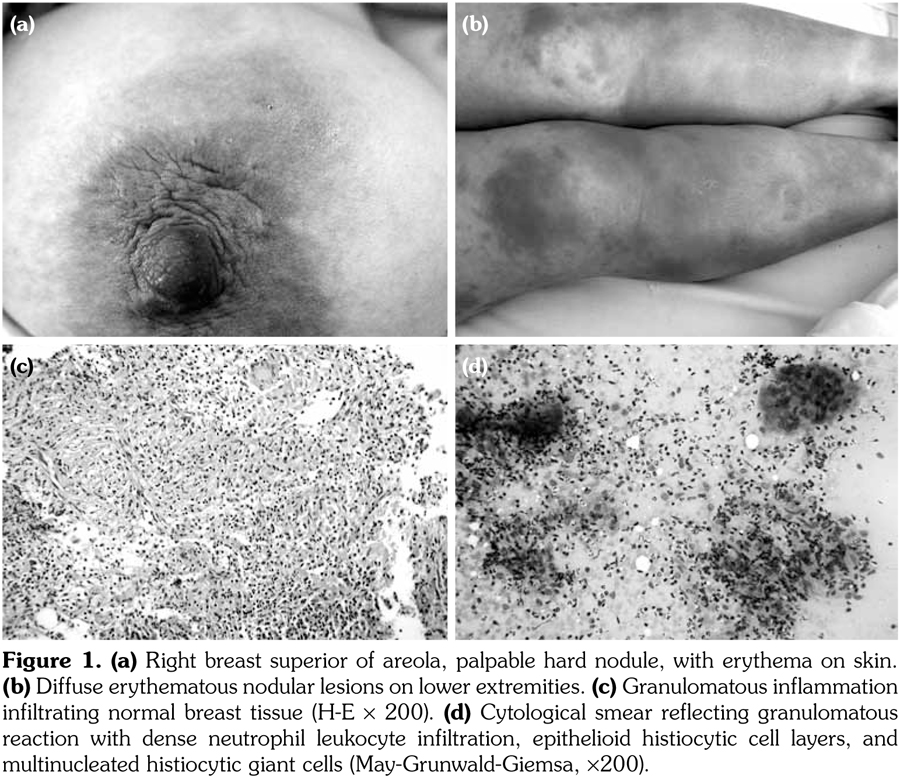 Tender red mass with skin retraction (3x2 cm diameter) was located on superior of right areola. Two lymph nodes at right axillary region were palpable. Widespread erythematous tender nodules on extensor surfaces on extremities consistent with EN were observed. Patient had arthritis of the left ankle with swelling and polyarthralgia.

Initial treatment was indomethacin (50 mg three times a day) and potassium iodide saturated solution (6 drops x3/day). EN and arthritis regressed with this therapy. Indomethacin and potassium iodide solution was discontinued and colchicine (3x0.5 mg/day) was started for IGM. On follow-up of three months; EN and arthritis regressed completely and IGM regressed partially (50%) in size. Patient was free of symptoms and no relapse was observed through colchicine monotherapy (2x0.5 mg/day) in follow-up of 20 months.

Nodular relapsing panniculitis of unknown origin with associated lipoatrophy, fever and lipophagia was originally described as “Weber-Christian disease”.(11,12) When previously published Weber- Christian Disease cases were reevaluated, most of them were diagnosed with new diagnoses including cytophagic panniculitis, calciphylactic panniculitis, fat necrosis with pancreatitis, connective tissue panniculitis and others.(13) With improved ability to identify these conditions, the term “Weber-Christian disease” has largely been abandoned in favor of the more specific diagnoses.(13,14) IGM is a subtype of panniculitis with granulomatous inflammation, which was first described by Kessler and Wolloch as an uncommon disease of females in reproductive years which can mimic various inflammatory and malignant disorders.(1,3) IGM is a diagnosis of exclusion once infection, malignancy, foreign body reaction, and other autoimmune disorders have been ruled out. In our case, underlying causes were excluded with medical history, laboratory tests, radiology, and pathology. Many etiological factors including local irritation, oral contraceptive use, viruses, parasites, mycotic diseases, hyperprolactinemia, diabetes mellitus, smoking, alpha-1 antitrypsin deficiency, and autoimmunity have been suggested in pathogenesis of IGM, but none of them have been proven yet.(2)

Usually, IGM presents with unilateral mass, breast pain, nipple inversion, and axillary lymphadenopathy. Histopathological examination of biopsy material from the center of lesion is valuable for accurate diagnosis.(15) Granuloma formations, dense neutrophilic infiltration on the background without necrosis are pathological findings of IGM. Granulomatous lobular mastitis with exclusion of other causes of granulomatous inflammation of breast (infections (tuberculosis, actinomyces) and systemic diseases (sarcoidosis, Wegener granulomatosis) is necessary for diagnosing IGM.(2) It has been suggested that a microorganism that has not been isolated with current techniques in cultures may lead to microabscess formation of IGM.(2) Taylor et al.(16) detected Corynebacterium in 41% of 34 isolated IGM lesions. Causal relationship was not confirmed since Corynebacterium is a member of normal flora. In our patient, Corynebacterium was not detected in the cultures.

In the literature, association of EN, IGM, and arthritis has been reported in seven cases up until now including the presented case (Table 1).(4-10) Two of these reports were associated with pregnancy and lesions had appeared in third trimester.(4,5) Arthritis accompanying IGM regresses concurrently with resolution of IGM, which suggests that arthritis in these cases was the result of a reactive process.(6,8,10)

Mild IGM usually resolves spontaneously with drainage. Resolution time may prolong up to 9 to 12 months. Moderate and severe disease require systemic treatment.(17,18) Surgery is not recommended due to slow wound healing after the operation. Methotrexate is reported as an effective treatment option in a few studies.(19,20) In case series regarding IGM therapy, colchicine, hydroxychloroquine and systemic steroids were reported to be equally efficient treatment modalities.(21) Despite therapy, relapses may be observed. IGM in our case was unresponsive to non- steroid anti-inflammatory drugs. Colchicine was preferred to suppress neutrophilic inflammation.

Idiopathic granulomatous mastitis is a rare neglected diagnosis which is important in differential diagnosis of breast cancer. Colchicine is an optimal therapy with low side effect profile in severe cases without spontaneous resolution. Even though current knowledge does not allow us to definitely claim that EN, arthritis, and accompanying IGM triad is an autoimmune reactive process, successful treatment with immunosuppressives and lack of an underlying cause may suggest an autoimmune mechanism.