Osteoarthritis (OA), the most common joint disorder, affects not only the joint cartilage, but also other joint structures such as subchondral bone, joint capsule, and quadriceps muscle.(1-3) Since both cartilage and other joint structures are affected from OA, research on quadriceps muscle strength, bone, and cartilage biomarkers has been carried out during recent years.(4,5) These biomarkers are thought to be a predictor for early OA and to determine the prognosis of OA. Although the relationship of biological markers with radiological severity has been investigated in several studies,(6-9) evidence regarding the relationship between biomarkers and quadriceps muscle strength in patients with knee OA is scarce.

The study consisted of 152 patients (22 males, 130 females; mean age 57.3±7.5 years; range 40 to 70 years) with primary knee OA fulfilling the clinical and radiological diagnostic criteria of American College of Rheumatology(1) and was performed in a cross-sectional design at the outpatient clinic of a university hospital between May 2013 and April 2014. Exclusion criteria were as follows: (i) history of any surgery to the lower extremity, (ii) history of malignancy, (iii) presence of neurological diseases including hemiplegia, paraplegia and/or polio sequela, (iv) presence of inflammatory diseases such as rheumatoid arthritis, ankylosing spondylitis and/or reactive arthritis, (v) diagnosis of septic arthritis, (vi) diagnosis of crystal arthropathy, (vii) presence of any cardiac diseases.

We recorded the demographic features and clinical evaluation of the individuals according to a standard form. We evaluated knee pain by using visual analog scale. We used the Western Ontario and McMaster Universities (WOMAC) OA Index (3.1 questionnaire), valid in our population, to assess functional status.(10) Besides, we filled out a comorbidity questionnaire for all patients.(11)

We invited the patients to the outpatient clinic to perform the isokinetic evaluation. We obtained blood samples from each patient on the same day of isokinetic testing. The examiner who conducted the isokinetic test was blinded to the results of the laboratory analysis regarding the biomarkers.

We investigated the biomarkers of the cartilage, adipose tissue, and bone. Additionally, as vitamin D deficiency is related with muscle weakness, we measured the 25-hydroxy vitamin D [25-(OH)D] level.

We evaluated the strength of the quadriceps muscle using the two below-mentioned methods:

2) Isokinetic test: We measured the peak torque of knee extensor and flexor muscles by isokinetic dynamometer (NORM 6000 CSMI, USA) on isometric and isokinetic module. Prior to the isometric measurement, we seated the patients on the dynamometric chair and stabilized them with waist and chest belts in 90° sitting position. We performed isometric measurements at 60° of knee flexion. We requested the patients to contract the muscle that was evaluated for 15-seconds twice in a 20-second interval during the measurement. Following a 60-second resting period, we evaluated the patients with an isokinetic module. To increase compliance to the test, we conducted seven submaximal repetitions at 240°/second, prior to the evaluation. Afterwards, we performed isokinetic test at 240°, 180°, 120° and 60°/second angular velocities. For interpreting the results, we chose the data obtained from 60°/second angular velocity. We repeated each set seven times at 60-second intervals. Although we performed all evaluations on both knees, we used the data regarding the more symptomatic knee for statistical analysis.

The individuals underwent anteroposterior knee radiography with the knees in full extension. We graded each knee according to the Kellgren- Lawrence radiographic grading system that grades OA from 0 to 4.(12) Ethical approval was obtained from the local ethics committee. All participants signed written informed consent before enrolment. The study was conducted in accordance with the principles of the Declaration of Helsinki.

Statistical analysis
We performed the statistical analysis using IBM SPSS statistical software version 22.0 (IBM Corporation, Armonk, NY, USA). We checked the normality of the variables. We used Mann Whitney-U and Kruskal-Wallis tests to analyze not-normally distributed continuous variables between the groups. We assessed the relationship between continuous variables by Spearman’s rank correlation tests. We gave the results as mean ± standard deviation. We considered p values less than 0.05 as statistically significant. We classified the strength of correlations as no-very weak, weak-moderate, moderate-strong, and excellent when the correlation coefficient (r) values were 0-0.24, 0.25-0.49, 0.50-0.74, and 0.75-1.00, respectively.(13) 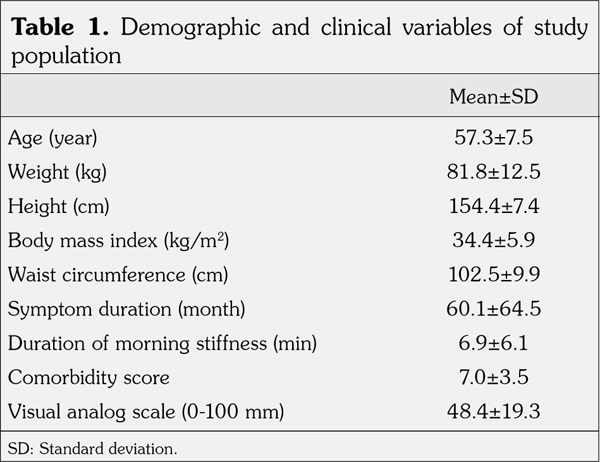 An analysis of the biomarkers according to BMI groups (morbid obese, obese, and overweight) revealed that only leptin level differed among the BMI groups (p=0.000).

Biological markers and quadriceps strength measures (via MMT and isokinetic dynamometer) of the study population are given in Table 2. Accordingly, the leptin level of females was significantly higher than males (p=0.000). Besides, the quadriceps strength measure evaluated both by MMT and isokinetic dynamometer was significantly lower in females than that in males (p=0.000). 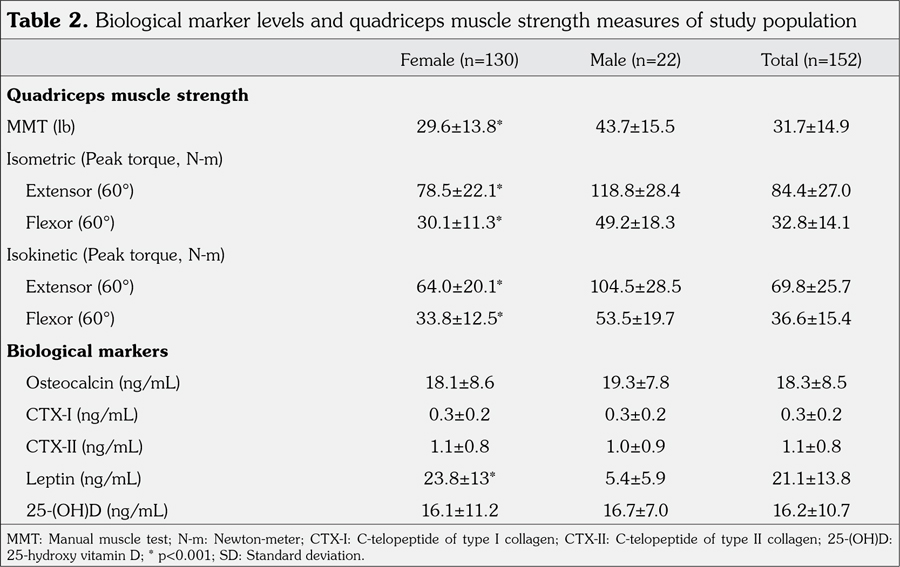 In this study, we investigated quadriceps muscle weakness, which was thought to be the cause or the result of OA,(1-3) in terms of its relationship with biological markers in patients with primary knee OA. We aimed to elucidate the relationship, if any, between quadriceps muscle strength and biological markers, as well as several clinical variables (pain scores and functional status) in patients with primary knee OA.

Mechanical and metabolic factors play a role in the development of OA and obesity is a well-known mechanical risk factor. In addition, there are also obesity-related metabolic factors including leptin and other adipokins.(16,17) Leptin was shown to be related with increased prevalence and incidence of knee OA. Therefore, it was suggested that leptin could serve as a potential predictor of knee OA.(15) Similarly, although not statistically significant, the present study showed that leptin levels were increasing as the radiological grade of knee OA increased. Concerning the cartilage biomarkers, urinary-CTX-II was not correlated with joint space narrowing in early knee radiographic OA. However, it was found to be correlated with cartilage defect severity measured by magnetic resonance imaging in the study by Ding et al.(18) The authors concluded that urinary-CTX-II could be an early biomarker to show cartilage damage.(18) In our study, we detected no significant difference among grades of knee OA regarding the other biological markers.

25-hydroxy vitamin D levels were not correlated with quadriceps muscle strength and patients’ functional status in the current study. Similarly, Al-Jarallah et al.(21) did not find any relationship between 25-(OH)D and the functional status of patients with primary knee OA in their cross- sectional study. However, Barker et al.(22) showed that decreased vitamin D levels are linked with diminished quadriceps functions. Contrary to the previous study, we could not find any correlation between 25-(OH)D level and quadriceps muscle strength in our study group. The most probable explanation for this difference is the limited number of patients with optimal vitamin D status, which avoids performing a comparative analysis.

The limitations of the current study are as follows: (i) the sample size was relatively small to suggest any correlation between biological markers and quadriceps muscle strength; (ii) the number of male patients was lower than that of females for making comparisons according to sex; and (iii) biological markers and quadriceps muscle strength could not be compared with healthy individuals as there was no control group.

This study was funded by the Research Fund of the Cukurova University which had no involvement in the design, collection, analyses or reporting of the study (Trial Registration No. TF2013LTP23).