Objectives: This study aims to determine the effects of oral glucosamine on glucose metabolism and insulin resistance in non-diabetic patients with osteoarthritis in Northeastern Iran.
Patients and methods: This placebo-controlled, randomized clinical trial included 40 non-diabetic patients with osteoarthritis (15 males, 25 females, mean age 63.8±7.64 years; range 49 to 80 years). Patients were randomly divided into two equal groups and treated with oral glucosamine sulfate 1500 mg a day or placebo for 90 days. Fasting blood sugar, glucose tolerance test with 75 grams glucose and serum insulin levels, and homeostatic model assessment-insulin resistance were evaluated initially and at the end of intervention.
Results: There were no significant differences between the groups in terms of blood sugar, glucose tolerance test, and insulin levels at the beginning and end of the study. In the oral glucosamine group, there were no significant changes in fasting blood sugar (94.1±7.14 mg/dL versus 93.5±9.45 mg/dL, p=0.15), glucose tolerance test (99.3±8.99 mg/dL versus 103.3±10.1 mg/dL, p=0.07), and homeostatic model assessment-insulin resistance (1.57±0.21 versus 1.48±0.21, p=0.13) after treatment. Also, placebo did not significantly affect serum glucose levels and insulin resistance.
Conclusion: Oral glucosamine with routine dosage was safe in our non-diabetic patients with osteoarthritis and had no significant effect on glucose metabolism and insulin resistance.

Osteoarthritis (OA) is a very common disease in the elderly, affecting approximately 40% of patients older than 60 years of age.(1) Analgesics and non-steroidal antiinflammatory drugs are conventional therapies in this regard, although with certain adverse effects. Popular and widely- used, glucosamines are currently administered for treating OA worldwide. On the other hand, type II diabetes mellitus is also more prevalent in this age population. In individuals aged over 50, OA may be concurrent with diabetes in 10-15% of the cases.(2,3) Glucosamine may play a role in glucose metabolism, which has raised concerns about its safety profile in diabetic patients. The entry of glucosamine into cells is stimulated by insulin and involves the glucose-transporter system. Glucosamine is then phosphorylated to glucosamine-6 phosphate by tissue hexokinases.(4) Several animal and in vitro studies have shown that high doses of glucosamine can induce insulin resistance and raise plasma level of glucose.(5-8) However, other human studies having investigated short- term intravenous glucosamine infusion effects did not report any such adverse impacts on either insulin sensitivity or glucose level.(9,10) Few studies aiming to evaluate the effects of oral standard doses of glucosamine in healthy humans concluded that oral glucosamine did not induce insulin resistance,(11-13) these findings add fuel to the controversy of whether glucosamine can adversely affect glucose metabolism. In this study, we aimed to determine the effects of oral glucosamine on glucose metabolism and insulin resistance in non-diabetic patients with OA in Northeastern Iran.

A total of 63 non-diabetic patients with OA (23 males, 40 females, mean age 64.8±8.66 years; range 53 to 81 years) were initially registered for this randomized, double blind, placebo controlled clinical trial which was performed between February 2013 and May 2014 in the Rheumatology Department of Mashhad University of Medical Sciences, Mashhad, Iran. All patients met the American College of Rheumatology criteria for the diagnosis of OA of the knee or the hip.(14,15) Patients, either diagnosed with diabetes, or with a family history of diabetes, body mass index <20 and >30 kg/m(2)), history of liver or renal disease, myocardial infarction, inflammatory diseases, pregnancy or lactation, systemic diseases that induce insulin resistance and those taking drugs that interfere in glucose metabolism including anticonvulsants, glucocorticoids and antipsychotics, were excluded. Thirteen patients were excluded on the grounds that they either subsequently declined or failed to meet our inclusion criteria. The remaining 50 patients (18 males, 32 females, mean age 63.9±6.86 years; range 50 to 79 years) were divided into two equal groups in a blind manner by computerized randomization. Both observers and the patients were blind as to the type of randomization and the drug form. After drawing serum baselines, first group received the usual dose of 1500 mg (500 mg x 3 capsules daily) glucosamine sulfate (Heaith Burst Company, Ohio, USA) for 90 days, whereas the second group received placebo capsules containing cellulose. Both groups were allowed to use analgesic medications, which they had taken before as needed. Every month, based on a random number chart, patients received boxes of 90 capsules of glucosamine or placebo from the dispenser in our center for three months and we ensured that the capsules were used fully and properly. After 90 days, laboratory tests were repeated in all patients. We excluded five patients in each group as they failed to take the drug or did not refer for follow-up. Finally, the study was completed with 40 patients (15 males, 25 females, mean age 63.8±7.64 years; range 49 to 80 years) with non-diabetic OA and body mass index within the medium range.

Participants were informed about the potential side effects of glucosamine including abdominal discomfort, diarrhea, constipation and rising in blood glucose, lipid profiles and blood pressure. All patients gave informed consent for participation in the study. The study protocol was approved by the Ethics Committee of Mashhad University of medical sciences. This clinical trial was registered in IRCT (ID: IRCT 201304284167N5). The study was conducted in accordance with the principles of the Declaration of Helsinki.

Statistical analysis
Laboratory results before and after the intervention were compared with paired student’s t-test for normal distributed data. Wilcoxon signed- rank test was used for the comparison of not normally distributed data. P-values less than 0.05 were considered significant. Consolidated standards of reporting trials flow diagram of the study is shown in Figure 1. 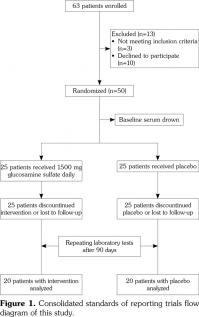 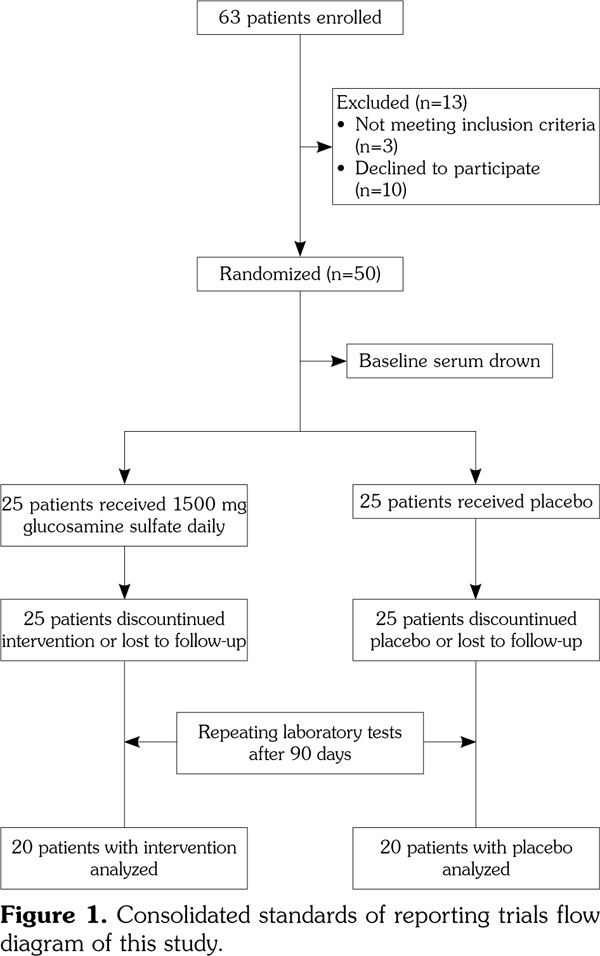 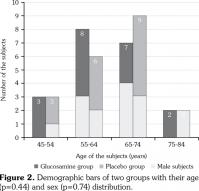 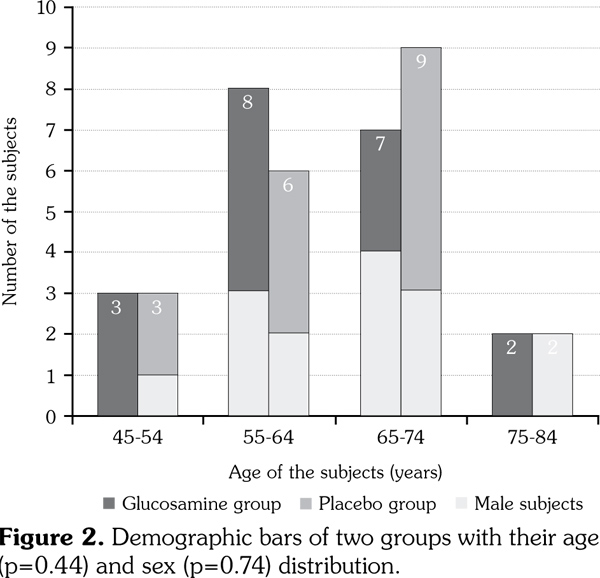 There were no significant differences between the two groups regarding the levels of fasting blood sugar, insulin, HOMA-IR, and blood sugar after 75 grams load of glucose. There were no significant changes in the laboratory results after 90 days of intervention (Table 1). In the glucosamine group, there were no significant changes in fasting blood sugar (94.1±7.14 mg/dL versus 93.5±9.45 mg/dL, p=0.15), glucose tolerance test (99.3±8.99 mg/dL versus 103.3±10.1 mg/dL, p=0.07), and homeostatic model assessment- insulin resistance (1.57±0.21 versus 1.48±0.21, p=0.13) after treatment. Blood sugar, two hours after the consumption of 75 grams of glucose, increased slightly in the glucosamine group which was considered insignificant. Also, placebo did not significantly affect serum glucose levels and insulin resistance.

Table 1. Comparison of parameters in patients with osteoarthritis before and after treatment with glucosamine or placebo
× 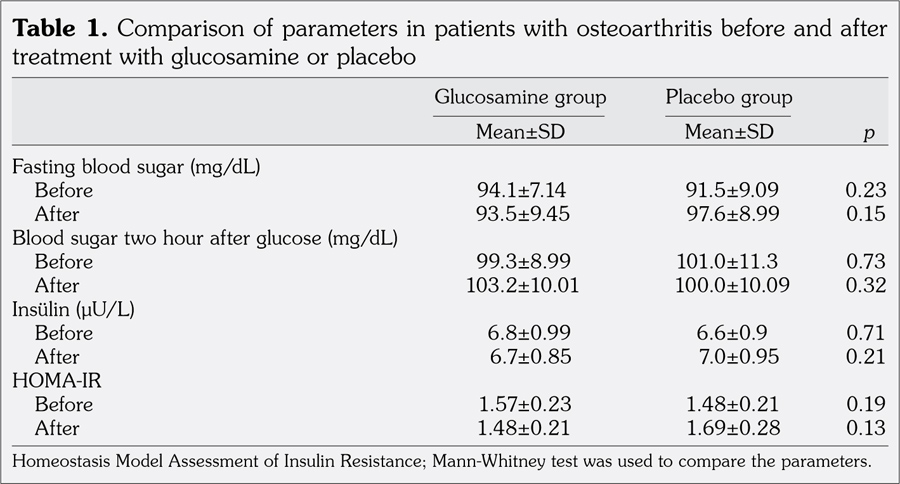 Osteoarthritis, a chronic degenerative disease, is considered to be one of the main causes of disability in the elderly population. Use of glucosamine, which is frequently prescribed for treating OA, is still plagued with heated controversies regarding the potential effects on glucose metabolism.(17,18)

The effect of glucosamine on blood glucose and insulin sensitivity may be attributed to the inverse flux in the hexosamine pathway.(19) Several experimental studies have been conducted to determine how it may affect glucose metabolism.(4-7) These studies indicate high concentrations achieved via intravenous injection, which might impair insulin sensitivity and glucose tolerance. In a randomized-placebo controlled study, Monauni et al.(10) concluded that high doses of glucosamine were in association with glucose tolerance impairments following intravenous glucose tolerance test. The authors concluded that this result was possibly due to the effect of glucose inhibiting pancreatic glucokinase. Also, some investigators believe that glucosamine may affect serum glucose levels and insulin resistance at doses used to treat OA.(20).(21) On the other hand, several studies, including ours, indicate that usual doses of oral glucosamine have no significant effect on glucose metabolism. Our study was conducted in individuals with medium range of body mass index who suffered from OA and took oral glucosamine 1500 mg/day for 12 weeks. Similarly, Muniyappa et al.(3) investigated the effects following the administration of 1500 mg/day oral glucosamine with regard to insulin sensitivity and fasting blood glucose in both lean and obese patients, with no tangible alteration in plasma as well as glucose insulin levels in either group after six weeks. Other studies(22-25) in diabetic patients showed that the administration of glucosamine 1500 mg/day had no significant effect on diabetes related endpoints, concluding that glucosamine, at usual doses, does not have any adverse effect on glycemic control in diabetic patients.

In a review of 33 studies of oral glucosamine administration for an average of 17 weeks on 3,063 subjects, Anderson et al.(26) concluded that there were no adverse effects on blood, urine or fecal parameters, neither any effect on glucose metabolism. Finally, a systematic review by Dostrovsky et al.(27) demonstrated that clinical evidence regarding the effects of oral glucosamine on glucose metabolism does not seem consistent; thus further research should be warranted in this issue.

Given the disparity of the findings in this respect, we decided to conduct our clinical trial in a different area with rather different immunogenic background of patients with OA. Although most of our patients with OA receiving glucosamine reported partial relief of their symptoms, we did not aim to assess the efficacy of the drug in this study.

Inconsistent results in the previous studies may be attributed to their varying dosages, route and duration of glucosamine administration, and the heterogeneity in the state of glucose condition in patients with diabetes, impaired glucose metabolism, and normoglycemic conditions.