Rheumatoid arthritis (RA) is a chronic autoimmune inflammatory disease of unknown etiology that is relatively common and disabling, characterized by progressive joint disorder, significant pain, and functional disability, which may cause premature mortality and compromised quality of life.(1)

Rheumatoid arthritis is associated with an increased risk of atherosclerotic vascular disease that accounts for about half of all deaths in this population (standardized mortality ratio of 1.5) including myocardial infarction, cerebrovascular accidents, and heart failure.(2) Several cardiovascular risk factors are present at higher frequency in patients with RA. In addition, chronic inflammation and drugs used in treatment strategies and sedentary lifestyle may play an important role in increasing the risk of cardiovascular disease in RA patients.(3,4) Epidemiological data suggest that RA is an independent risk factor for atherosclerotic vascular diseases though increased rates have not been explained by traditional risk factors, use of steroids or non-steroidal anti-inflammatory drugs, or shared genetic features.(5)

The development of accelerated atherosclerosis and increased risk of cardiovascular disease in patients with RA may be influenced by occurrence of metabolic syndrome (MetS).(6) MetS describes a constellation of major risk factors for cardiovascular diseases such as atherogenic dyslipidemia, obesity, hypertension, and diabetes. It is measured in terms of waist circumference, triglyceride levels, fasting blood glucose, and high-density lipoprotein (HDL) level. Its underlying pathophysiology is thought to be insulin resistance.(7)

There are five definitions for metabolic syndrome by National Cholesterol Education Program-Adult Treatment Panel (NCEP-ATP) III 2001, NCEP-ATP 2004, World Health Organization, International Diabetes Federation, and European group for study of insulin resistance. However, the relative value of the different MetS definitions in terms of prognosis and management has been established to be similar. Nevertheless, the NCEP-ATP III and International Diabetes Federation definitions are most widely used.(8)

In this study, patients with RA were evaluated for prevalence of metabolic syndrome. The study group consisted of RA patients who were treatment naïve or did not receive disease modifying antirheumatic drugs (DMARDs) for more than six weeks before attending hospital due to financial constraints or access to healthcare facilities.

Patients with inflammatory diseases other than RA such as neoplastic disorders, chronic kidney disease, chronic liver disease, or with chronic infections like human immunodeficiency virus, or diseases known to cause dyslipidemia other than human immunodeficiency virus, e.g. hypothyroidism, nephrotic syndrome, or who received lipid or urate lowering drugs, irregular treatment with DMARDs, hormone replacement therapy, or patients aged <16 years, female patients on oral contraceptive pills, pregnant patients, patients with a diagnosis of familial dyslipidemia, or patients who received DMARD for longer than six weeks were excluded.

A written informed consent was obtained from all the participant. The study was approved by Research and Ethical Review Board of Silchar Medical College and Hospital. The study was conducted in accordance with the principles of the Declaration of Helsinki.

Height, weight, waist circumference, and hip circumference were noted for both patient and control groups. Waist circumference was measured with a non-stretchable tape, placed directly on skin, at end of expiration at midway between lower costal margin and upper border of iliac crest. Body mass index (BMI) was calculated as body weight divided by square of height (kg/m(2)). In accordance with World Health Organization standard for Asian population, BMI <18.5 kg/m(2) was considered underweight, 18.5-22.9 as normal, 23-27.49 as overweight, and >27.5 kg/m(2) as obese. Blood pressure was measured using mercury sphygmomanometer in sitting position after five minutes of rest.

Baseline characteristics of both patient and control groups are shown in Table 1. Smoking, alcohol, and postmenopausal statuses in females were similar in both groups. Mean waist circumference, BMI, and systolic blood pressure were significantly higher in RA group than control group (p<0.005).

Table 1. Demographic and anthropometric parameters of RA patients and controls
×

The criteria for MetS are presented in Table 3. The most common abnormality noted in RA was reduced HDL cholesterol (63.09%) followed by increased triglyceride (53.57%) levels. However, the most significant difference between RA and control groups were elevated waist circumference and elevated triglyceride level.

Table 3. Prevalence of components of metabolic syndrome-rheumatoid arthritis and controls
× 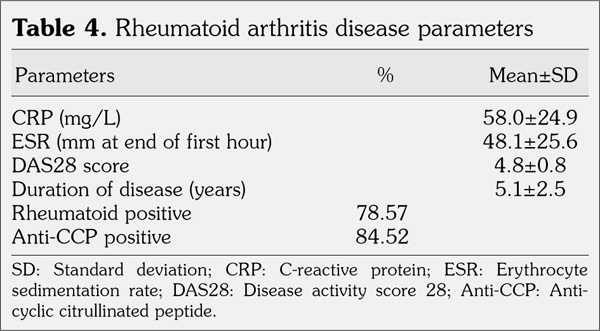 Table 5. Characteristic of rheumatoid arthritis patients according to presence or absence of metabolic syndrome
×

Table 6. Odds ratios for having the metabolic syndrome in patients with rheumatoid arthritis
×

This study was conducted in eastern India in patients with RA and detected that prevalence of MetS was significantly higher in RA group compared to control group. Among RA patients with metabolic syndrome, more patients were in the age group of 51 to 60 years with a female preponderance.

Most studies on prevalence of MetS in patients with RA have included patients with DMARD therapy but only a few have reported on treatment naïve patients. Apart from that, a limited number of studies have been reported from the Indian subcontinent.

The frequency of MetS has varied markedly between different studies,(11) most likely because of the lack of accepted criteria for the definition of MetS. The frequency of MetS (40%) shown by Karvounaris et al.(12) (defined according to the NCEP-ATP III criteria) in RA patients was comparable with their control population. In South Asia, Dodani et al.(13) found that the frequencies of MetS in patient in rheumatoid arthritis were 13.3% and 40%, respectively, according to World Health Organization and NCEP-ATP III criteria.

Chronic inflammation seen in patients with RA is one of the important factors which links it to both MetS and atherosclerosis.(21) Proinflammatory cytokines, tumor necrosis factor-alpha, and interleukin-6 in patients with RA contribute to insulin resistance. Insulin resistance leads to other metabolic disturbances like hyperglycemia and dyslipidemia which independently contribute to atherosclerosis and cardiovascular risk. Proinflammatory cytokines are also independently involved in pathogenesis of atherosclerosis through production of acute phase reactant C-reactive protein. Thus multiple mechanisms including inflammation, insulin resistance, or dyslipidemia increase burden of cardiovascular risk in RA patients.(22)

Our study found lower HDL cholesterol, higher triglyceride, and higher fasting blood glucose levels in RA group as compared to control group. Similar findings were reported by Dessein et al.(15) in their study on RA patients and controls. The lipid profile of RA patients has been evaluated in several studies that have reported dyslipidemic(23,24) as well as normal pattern(25) in RA patients when compared to controls. The discrepancies observed in the lipid values in various studies could be due to differences in the population studied as well as disease activity.

Our study also reported higher waist circumference, weight, and BMI in RA group than in control group along with limited physical activity. These findings are in concordance with the previous studies.(26)

The factors detected in this study to be independently associated with MetS in RA included disease duration, systemic inflammatory marker, mainly CRP, and disease activity. The association between CRP, disease duration, and DAS28 has been previously reported.(12,27) In our study, we did not find any association between ESR and MetS contrary to other studies.(28) Rheumatoid factor seropositivity was also not associated with prevalence of MetS in RA. Similar findings were reported by Rostom et al.(29) and Karvounaris et al.(12)

Our study has some limitations which may be found below;

1. Small sample size compared to other studies,
2. Study’s cross-sectional design not allowing to conduct any cause-effect inferences on relationship between RA characteristics and MetS.
3. Risk of selection bias since our center is a tertiary referral center with recruitment of mostly active and severe disease patients,
4. The DAS28 ESR, which was an assessment method used in this study, being only a single point measure of disease activity whereas this will vary over time for RA.

In conclusion, this study showed that MetS is highly prevalent in RA patients than normal population. A higher systemic inflammatory marker, disease duration, and disease activity were independent predictors of MetS in RA. Our findings suggest that physicians should screen RA patients for MetS to check for and reduce risk of cardiovascular diseases.