Rheumatoid arthritis (RA) is a systemic autoimmune disease of unknown etiology that can cause serious weakness and inability.(1) RA is characterized by chronic synovitis, systemic inflammation and the presence of autoantibodies such as rheumatoid factor (RF) and anti-cyclic citrullinated peptide (Anti-CCP).(2) This disorder is three times more frequent in females than males. Prevalence of disease increases with age and is highest in females older than 65 years. It is estimated that the disease affects 0.5% to 1.0% of adults in developed countries.(3) and incidence ranges from 9 to 36 per 100,000 adults in European countries.(4) A study in the southeastern of Iran showed that the prevalence of RA in the population was 0.98%.(5) Despite several factors which may cause the disease, there is evidence that genetic factors also play an important role and it is estimated that 50% of the risk of developing RA is attributable to genetic factors.(6) The disease is defined by increased expression of proinflammatory cytokines such as interleukin (IL)-1, IL-2, IL-6, IL-17, interferon-gamma (INF-γ), and tumor necrosis factor-alpha (TNF-α). Most of these cytokines can be detected in synovial fluid from RA patients.(7) TNF-α is an inducible cytokine with a broad range of proinflammatory and immunostimulatory actions. This cytokine plays an important role during the pathogenesis of RA. It initiates the inflammatory response leading to edematous joint and subsequent bone destruction during the development of disease.(8) TNF-α is produced mostly by activating macrophages although it can be produced by T CD4+ cells and natural killer cells. It binds to one of its receptor, TNF-receptor type I (p55) or TNF-receptor type II (p75). The TNF-receptor type I is expressed in most tissues and the TNF-receptor type II on immune system cells.(9) The interaction of TNF-α with TNF-receptor type I is a migratory stimulus for T CD4+ cells in RA subjects.(10) Therefore, this cytokine is necessary for TCD4+ migration in arthritic joints. Elevated serum level of TNF-α has been reported in RA patients.(11,12)

In human, the TNF-α gene is located on the short arm of chromosome 6 in the 6P21 region where the class III region of the human leukocyte antigen genes is located.(13) Several single nucleotide polymorphisms (SNP) have been demonstrated in the promoter region of the TNF-α gene and some of them are known to affect the level of gene expression.(14) Of these, mutation in the promoter region with a G∅A substitution in position -238 (rs361525G/A), has been the subject of intense studies.(15-17) A study showed that -238 allele is associated with higher TNF-α production with respect to the -238 G allele,(18) however, this result was not confirmed by other studies.(19,20) The G∅A substitution in position -238 in the TNF-α gene is associated with lower production of TNF-α in patients with ulcerative colitis.(21)

This case-controlled study was performed between March 2012 and December 2013 on two groups including 90 RA patients (20 males, 70 females; mean age 50.3 years; range 26 to 65 years) who referred to the Rheumatology Clinic of Shahid Sadoughi hospital, Yazd, Iran and 90

healthy controls (21 males, 69 females; mean age 48.6 years; range 27 to 63 years) who were randomly selected from the general population who lived in the same area, strictly unrelated, and without history of chronic inflammatory or autoimmune disease. The subjects fulfilled the 2010 American College of Rheumatology- European League Against Rheumatism classification criteria for RA.(22) Disease activity was assessed using the Disease Activity Score 28 (DAS28). Subjects in both groups were matched in terms of age and sex. All patients were examined by a rheumatologist. The Ethics Committee of Shahid Sadoughi University of Medical Sciences, Yazd, Iran approved the study design. Signed informed consent was obtained from each subject. The study was conducted in accordance with the principles of the Declaration of Helsinki.

A sample of peripheral venous blood (10 mL) was taken from all participants. Five milliliters of each blood sample were collected in ethylenediaminetetraacetic acid coated tubes for deoxyribonucleic acid (DNA) extraction and the rest centrifuged after clotting and the serum harvested and stored in -70 °C until used. In the RA group, hemoglobin level was measured by an automated cell counter (CelltacE, Nihon Kohden, Japan). The Westergren method was used to determine the erythrocyte sedimentation rate at the laboratory.

The RF and C-reactive protein (CRP) levels in all sera were measured by standard kit according to manufacturer's instructions (Pishtaz Teb and Bionic Company, Iran respectively) and using auto analyzer (Prestige 24i, Japan).

The levels of TNF-α in the RA and control groups were measured by enzyme-linked immunosorbent assay method according to the kit instructions (eBioscience, Bender Med Systems, GmbH, Austria). The sensitivity of TNF-α kit was 1.65 Pg/mL.

The PCR cycling conditions were as follows: five minutes at 94 °C, 30 cycles of denaturation for one minute at 94 °C, annealing for one minute at 61 °C and extension for one minute at 72 °C. A final extension time of five minutes at 72 °C was included at the end of last cycle (Applied Biosystems, ABI, Foster City, CA, USA). The product size of PCR was 315 base pairs (bp) that was confirmed by electrophoresis in a 1% agarose gel stained with the DNA green viewer (Pars-Tous, Iran). The PCR product was digested by an addition restriction enzyme Ddel (Promega, USA, Cat No. R6295) at 37 °C for 60 minutes in a final volume of 20 μL under the following conditions; 10 μL PCR product, 7.3 μL deionized water, 2 μL 10x buffer, 0.5 μL Ddel and 0.2 μL acetylated bovine serum albumin. The resulting fragments of the restriction fragment length polymorphism were analyzed using electrophoresis on 2% gel agarose. All the gels were imaged using E-gel imager (Life Technologies) instrument. Ten samples from each group were randomly selected to perform the repeated assays, and the results were 100% concordant.

Statistical analysis
The statistical analyses were performed with the SPSS software version 16.0 (SPSS Inc., Chicago, IL, USA). SNP were evaluated for deviation from Hardy-Weinberg Equilibrium for both RA and control groups by a Chi-square test. The genotype and allele frequencies of -238 G/A polymorphism were calculated by direct count. Chi-square test was used to evaluate the differences between the genotype frequency in the RA and control groups. The mean of serum TNF-α between RA and control groups and comparison mean serum concentrations of TNF-α in the RA and control groups in the genotypes GG, GA and AA were analyzed with Mann-Whitney U test. In RA group, Spearman's correlation test was used to test the correlation between the mean serum TNF-α level and anti-CCP, RF, and CRP. The data for serum TNF-α are shown as mean ± standard error of mean and for the others as mean ± standard deviation. P-values less than 0.05 were considered statistically significant. 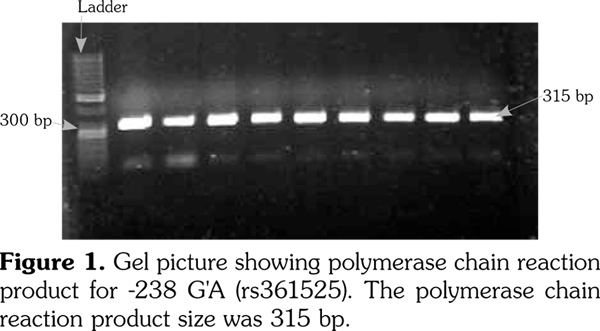 Cytokines are important mediators of the immune system and imbalance or deficiency in the cytokine network may lead to autoimmunity disease susceptibility. TNF-α is a multifunctional, proinflammatory cytokine, which plays an important role in many autoimmune diseases. The TNF-α gene has been postulated as a key genetic factor in inflammatory and autoimmune diseases.(23) The gene is tightly regulated at the level of transcription.(24,25) In this study, we compared the serum level of TNF-α in RA patients and healthy controls. Our results showed that RA patients had a significantly higher level of TNF-α than controls. TNF-α has an important role in the regulation of a cascade of pathogenesis events leading to RA. This cytokine is produced in high concentration by a number of cells, such as monocyte and T cells in RA.(26) The pivotal role of TNF-α in pathogenesis of RA has been demonstrated in successful clinical trials targeting TNF-α and in collagen-induced arthritis in mice as a model of RA.(27) Other authors reported elevation of serum TNF-α in RA patients and our results are consistent with previous findings.(11,28,29)

In our study, there was no correlation between serum TNF-α concentration and the serum levels of RF, anti-CCP, erythrocyte sedimentation rate, and CRP in RA patients. RF is detectable in nearly 70% of RA patients, although its presence is not specific for RA.(30) Also, anti-CCP assays are detectable in about 70% of patients with RA and are highly specific for RA.(31) CRP is an acute- phase protein mostly synthesized by hepatocytes and Kupffer cells in the liver and is regulated by cytokines such as TNF-α and IL-6.(32) As expected, the concentration of CRP was significantly increased in RA patients as compared to the controls. In contrast to our results, the correlation of TNF-α level with RF, CRP, and erythrocyte sedimentation rate was reported in RA patients.(33)

We could not find a significant difference in the genotype frequencies of the -238 G/A polymorphism between the RA and control groups. In a study, researchers investigated TNF-α -238 polymorphism and association with messenger ribonucleic acid expression and soluble TNF-α in 50 RA patients and 100 healthy subjects. No significant difference in TNF-α -238 G/A polymorphism was observed in both groups.(33) Fabris et al.(39) investigated this polymorphism in 100 RA patients with severe and mild disease and 45 healthy blood donors. They reported that AG genotype was absent in severe-unresponsive RA, but present in mild-responsive RA patients and GG homozygosity associated with severity and unresponsiveness. In a prospective study, the correlation between TNF-α -238G/A promoter polymorphism with joint damage in RA was determined. The results showed that TNF -238 GG genotype contributed to the progression of joint destruction in RA.(40) Association of -238 G/A polymorphism with pathogenesis in some autoimmune diseases was studied. The results of various studies on this topic have been inconsistent. Laddha et al.(41) reported significant association of this SNP with generalized and localized vitiligo. The study performed on Chinese patients with Graves’ disease indicated that the distribution of -238 G/A genotypic and allelic frequencies between patient and control subjects was significantly different. The G allele of TNF-α -238 conferred a higher risk of Graves' disease as compared with A allele.(36) Ferguson et al.(42) studied association of this SNP in the TNF-α gene with inflammatory bowel disease risk. They did not find a significant difference between controls and Crohn’s disease patients, and ulcerative colitis patients and controls. Independent association of TNF-α polymorphism with type 1 diabetes susceptibility has been reported.(43)

There are some limitations to our study, which could affect the results. There were no consideration and analysis of the type of drugs used by the patients. Some drugs can affect the serum TNF-α level. In addition, one SNP was determined and compared between RA patients and controls. Furthermore, our sample size may not be large enough which may have weakened our ability for a reliable statistical association.

In conclusion, the findings of the present study indicate that -238G/A polymorphism in TNF-α gene might not be associated with a high risk of RA in Iranian patients and this SNP do not affect the serum level of TNF-α in RA patients. Further prospective studies on larger sample sizes with different ethnicities are required to confirm our findings. Also, multiple SNPs should be considered in future studies.

Acknowledgment: Shahid Sadoughi University of Medical Sciences provided a grant for this research project. This manuscript is a part of the M.Sc thesis of Parisa Noorbakhsh. The authors are grateful to Mr. Ali Amini and Mrs. Fatemeh Zare for their technical assistance and Dr. Amin Dehghan for critical reading of the manuscript. We would also like to thank Dr. Mahmood Vakilifor for his assistance in statistical analysis.