Objectives: This study aims to compare the levels of platelet and erythrocyte indexes including mean platelet volume, platelet distribution width (PDW), and red blood cell distribution (RDW) values between complex regional pain syndrome (CRPS) type I patients and healthy controls to establish a marker of neuroinflammation that might be a potential factor involved in CRPS etiopathogenesis.
Patients and methods: A total of 21 patients (14 males, 7 females; mean age 35.0±15.4 years; range 15 to 69 years) with a diagnosis of CRPS type I and 44 age- and sex-similar healthy controls (29 males, 15 females; mean age 35.8±8.5 years; range 16 to 53 years) were included in this study. Mean platelet volume, PDW, RDW, white blood count, hemoglobin, erythrocyte sedimentation rate, and C-reactive protein levels, and neutrophil to lymphocyte ratio and thrombocyte to lymphocyte ratio were compared between the patient and control groups.
Results: No differences were noted between patient and control groups in terms of erythrocyte sedimentation rate and C-reactive protein levels, white blood cell, neutrophil, lymphocyte and thrombocyte counts, and neutrophil to lymphocyte and thrombocyte to lymphocyte ratios (all p>0.05). When compared with controls, patients had significantly higher mean corpuscular volume (p=0.019) and RDW (p=0.002) values, and a lower PDW level (p=0.006).
Conclusion: Differences in PDW, RDW, and mean corpuscular volume values between patients and controls might support the potential role of neuroinflammation in the etiopathogenesis of CRPS type I. Prospective studies with larger sample sizes are warranted in the early detection and differential diagnosis of CRPS type I.

Complex regional pain syndrome (CRPS) is a clinical condition characterized by symptoms such as pain, swelling, allodynia, and dysesthesia. It usually develops at the distal of an affected extremity after trauma.(1,2) CRPS is classified into two types, and the main difference between them is that type II develops after a peripheral nerve injury. The major symptom is severe and usually burning type of neuropathic pain that is inconsistent with the triggering factor. While the etiology of CRPS may include different entities such as trauma, cerebrovascular event (CVE), myocardial infarction, and inflammatory diseases, it may also occur idiopathically.(1) Although diagnosis of CRPS can be established based on anamnesis and physical examination, imaging methods such as radiography, magnetic resonance imaging, and three-phase bone scintigraphy may be useful in case of any doubt. However, these methods are not commonly used for diagnostic purposes as they have different sensitivities and are not specific to CRPS.(1)

Several factors including neurogenic inflammation, peripheral  sensitization, reorganization of Amyloid beta filaments, central sensitization, sympathetic dysfunction, ectopic discharge, and microvascular dysfunction have been held responsible for the pathogenesis of CRPS type I.(3-9) In order to demonstrate its potential role in CRPS pathogenesis, neurogenic inflammation has been investigated in a limited number of studies. However, to our knowledge, there is no significant finding regarding the diagnostic value of the conventional inflammatory markers including erythrocyte sedimentation rate (ESR), C-reactive protein (CRP), white blood cell count, and several other sophisticated parameters such as tumor necrosis factor alpha and interferon gamma.(10,11)

In previous studies including patients with multiple sclerosis (MS) and Alzheimer’s disease (AD) where neuroinflammation plays a crucial role in the disease etiopathogenesis, changes have been reported in mean platelet volume (MPV), platelet distribution width (PDW), and red blood cell distribution (RDW) values.(12-14) MPV, PDW, and RDW are the parameters that reflect thrombocyte size, heterogeneity and activation of the thrombocytes, and the variations in erythrocyte size/volume, respectively.(13,14) On the other hand, to the best of our knowledge, there is no study investigating the alterations of these parameters in patients with CRPS.

Accordingly, in this study, we aimed to compare the levels of platelet and erythrocyte indexes including MPV, PDW, and RDW values between CRPS type I patients and healthy controls to establish a marker of neuroinflammation that might be a potential factor involved in CRPS etiopathogenesis.

A total of 21 patients (14 males, 7 females; mean age 35.0±15.4 years; range 15 to 69 years) diagnosed as CRPS type I according to Budapest criteria(15) and 44 age- and sex-similar healthy controls (29 males, 15 females; mean age 35.8±8.5 years; range 16 to 53 years) were included in this cross-sectional case-control study. Patients who admitted to Physical Medicine and Rehabilitation outpatient policlinics of Harran University Medical Faculty between January 2014 and January 2016 with CRPS complaints that started less than six months ago, and patients with normal ESR, CRP, white blood cell, thrombocyte count, and hemoglobin levels were enrolled. Antecubital venous blood samples were taken in morning after overnight fasting into hemogram, ESR, and biochemistry analyzing tubes. The biochemistry analyzing tubes were centrifuged at 1.500 rpm for 10 minutes to obtain serum samples for the measurements of CRP.

Patients with a systemic inflammatory/hemato- oncological disease and those with an acute infection were excluded. ESR values below age/2 in males and (age+10)/2 in females, and CRP levels between 0.01-0.5 mg/dL were considered to be within normal limits. MPV, PDW, RDW, white blood count, hemoglobin, ESR and CRP levels, and neutrophil to lymphocyte ratio and thrombocyte to lymphocyte ratio were compared between the patient and control groups. The study was initiated after approval was obtained from Harran University Medical Faculty Ethics Committee. A written informed consent was obtained from each patient. The study was conducted in accordance with the principles of the Declaration of Helsinki.

Statistical analysis
All of the collected data were transferred into PASW version 18.0 software (SPSS Inc., Chicago, IL, USA). Data are given as mean ± standard deviation. Kolmogorov-Smirnov test was used to determine whether variables were distributed normally or not. Numeric data were compared by using Student’s t test or Mann- Whitney U test, where appropriate. Chi-square test was used to compare the categorical variables. A p value <0.05 was considered as significant difference.

Demographical characteristics and laboratory findings are shown in Table 1. CRPS was posttraumatic in 19 patients and developed after a CVE in two patients. Mean age and sex distribution were similar between the patient and control groups (both p>0.05). Similarly, no differences were noted between the groups in terms of ESR and CRP levels, white blood cell, neutrophil, lymphocyte and thrombocyte counts, and neutrophil to lymphocyte and thrombocyte to lymphocyte ratios (all p>0.05). When compared with controls, patients had significantly higher mean corpuscular volume (MCV) (p=0.019) and RDW (p=0.002) values, and a lower PDW level (p=0.006). 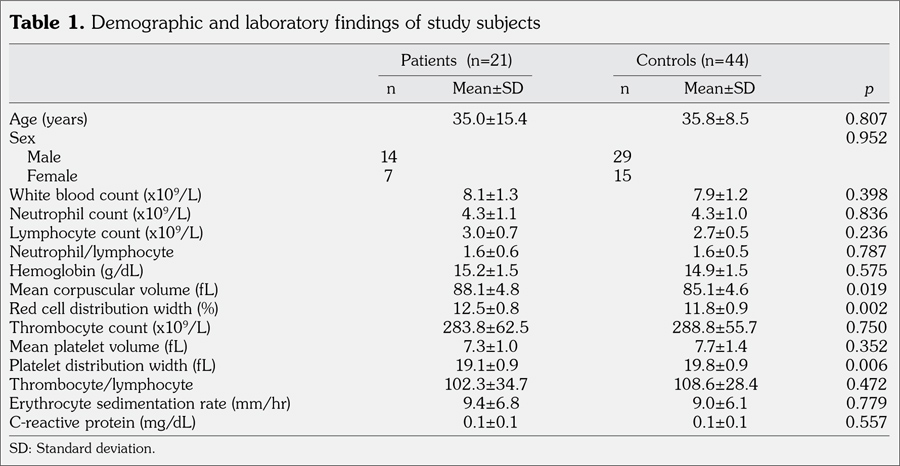 In the present study, we aimed to investigate erythrocyte and thrombocyte indexes including MPV, PDW, and RDW values as markers of neuroinflammation in patients with CRPS type I. When compared with control group, patient group had significantly lower PDW, and higher RDW and MCV values.

In a review on CRPS,(21) there was very limited histological evidence of usual inflammation in the skin, joint or muscle biopsy samples of the patients, and on the basis of other findings, the present inflammation was considered to be of neurogenic origin. In an experimental study investigating neurogenic inflammation, patients with CRPS were observed to develop neurogenic inflammation much easily and found to have markedly more neuropeptide release.(22)

While the role of thrombocytes in the development of cardiovascular diseases and cancer has been extensively studied, their role in neuroinflammation appears to be rather overlooked. A review investigating the role of thrombocytes in neuroinflammation pointed out that the thrombocytes play major roles in inflammation and immunity.(23) According to Gasparyan et al.,(24) MPV value is a parameter that varies according to proinflammatory and prothrombotic conditions. Elevated MPV was indicated as an independent risk factor for myocardial infarction and CVE, while a low MPV value was shown to be associated with the activity of inflammatory rheumatologic diseases.(25-27)

In this study, hemoglobin levels were similar between the groups, while the patient group had significantly elevated MCV and RDW values. RDW indicates variations in size/volume of the red blood cells and it is a frequently used parameter for the differential diagnosis of anemia, particularly iron deficiency anemia.(29) In a study investigating RDW values in MS patients,(14) RDW was found to be higher in MS patients than healthy controls, and RDW values higher than 13.1% were shown to predict MS with a sensitivity of 70% and specificity of 85%. Another study including patients with acute optic neuritis(30) showed that RDW values were higher in the patient group when compared with controls.

Limitations of this study include its cross- sectional design and relatively small sample size. In addition, lack of sophisticated parameters such as tumor necrosis factor alpha and interferon gamma are another drawback of the study.

In conclusion, the differences noted in the PDW, RDW, and MCV values between patients and healthy controls might support the potential role of neuroinflammation in the etiopathogenesis of CRPS type I. Prospective studies including larger sample sizes are required to support the practical use of the inexpensive, simple, easily accessible tests, such as PDW and RDW, in the early detection and/or differential diagnosis of CRPS type I.