Clinical and Radiological Recovery of Osteitis Pubis: Spontaneous or Steroid-Induced?

Osteitis pubis is aseptic inflammation of symphysis pubis and the surrounding structures including muscles and connective tissue. Although it is more prevalent in athletes, it can be related to pregnancy, pelvic surgery or rheumatologic diseases.(1,2) Prevalence among athletes was reported as 0.5 to 6.2%.(1,3,4)

The treatment protocol is stepwise, from the least to more invasive. The management may start with conservative methods, and if the complaints persist, injections should be tried.(5,6) The last treatment option is surgery.

In this article, we report a pregnancy- related osteitis pubis case which had significant symptomatic and radiographic improvement after two steroid injections.

A 33-year-old female patient, who was 36-week pregnant, presented with severe pelvic pain in 2012. Her complaints had begun two years before referral to our clinic after giving vaginal birth in 2010. Her pelvic computed tomography and plain radiograph revealed osteitis pubis (Figure 1a). She was treated with analgesics and physical therapy modalities in another clinic. 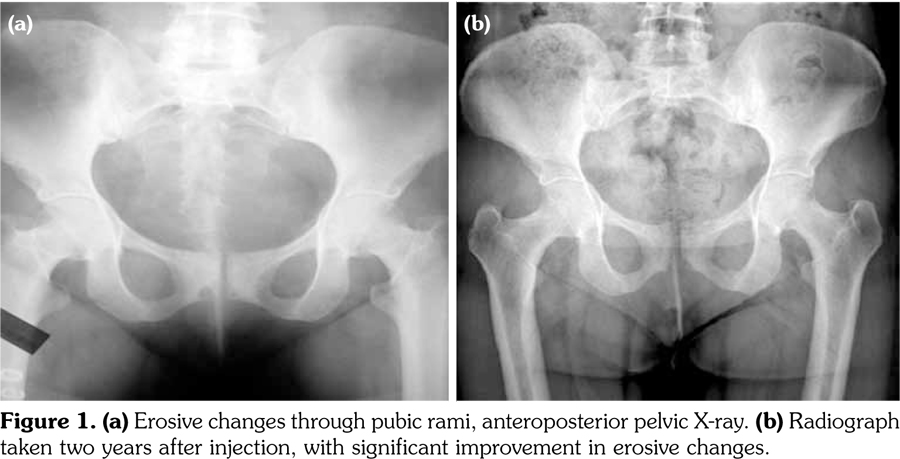 On our physical examination, there was tenderness on pubis. After delivery, plain radiograph showed erosions all through both pubic rami, which were more prominent at the inferior part. Her numeric rating scale for pain was 7/10. Symphysis pubis injection with fluoroscopic guidance was performed with 40 mg methylprednisolone and 1 mL 0.5% bupivacaine. One hour after this injection, her numeric rating scale decreased to 3/10, which remained at the same level throughout the first three weeks. At seventh week, she was symptom free after a second injection with the same technique.

At two-year control visit, patient’s pelvic X-ray was normal. All the abnormal findings including the erosions through the pubic rami regressed significantly when compared to initial X-ray (Figure 1b).

Although known as a self-limited disease, osteitis pubis might last years before symptoms resolve. It is a very painful and debilitating condition. To improve health quality and prevent loss of labor, immediate pain relief is important. Therefore, injection under fluoroscopy is a precious technique, which has no reported complications.

To the best of our knowledge, there is no report showing radiographic resolving after symphysis pubis injection. Two cases have been reported with radiographic improvement, which were treated with oral and intravenous corticosteroids. The first is a 60-year-old female patient who had pubic pain after urinary incontinence surgery. She was treated with intravenous glucocorticoids and had a rapid symptom relief. One year after treatment, radiographic improvement was shown.(7) The second is a 57-year-old female spondyloarthropathy patient who had mild symptom relief with non-steroidal anti- inflammatory drugs and oral corticosteroid therapy. She had severe periodontitis. After treatment of infection, her symptoms relieved completely. Two years after clinical onset, the radiograph was totally normal.(8) Since steroids have an anti-inflammatory effect, recovery via steroid injection was observed radiographically and clinically.

Symphysis pubis steroid injection may be preferred in osteitis pubis patients due to its effects on both immediate symptom relief and improvement of bone erosions. Further randomized controlled studies are necessary for better understanding of healing in osteitis pubis.