Objectives: This study aims to investigate the effects of bosentan on the prevention and treatment of digital ulcers in systemic sclerosis (SSc) patients.
Patients and methods: The study included 30 patients (4 males, 26 females; mean age 49.6±15.4 years; range 23 to 71 years) diagnosed with SSc and treated with bosentan for digital ulcers. Bosentan was administered to all patients for a mean of 14±10.3 months. All SSc cases were refractory to calcium channel antagonists or angiotensin II inhibitors. The diagnosis of SSc was based on the American College of Rheumatology criteria and patients were classified as limited or diffuse cutaneous SSc according to the LeRoy classification.
Results: Mean disease duration was 8.8±8.0 years and mean duration of digital ulcers was 29.4±6.6 months. Under the bosentan treatment, eight patients (26.7%) developed new digital ulcers; all of these patients had diffuse cutaneous SSc. Health Assessment Questionnaire scores improved after 12 months and 24 months of treatment (p<0.001). Three patients (10%) developed pulmonary arterial hypertension under bosentan treatment [two patients (6.6%) had SSc-associated pulmonary arterial hypertension and one patient (3.3%) had interstitial fibrosis-associated pulmonary arterial hypertension]. The anti-centromere antibody positive patients were predominantly classified as limited cutaneous SSc. Of the patients positive for anti-topoisomerase-1 antibodies, a high proportion was classified as diffuse cutaneous SSc. Pulmonary fibrosis was most frequent in the anti-topoisomerase-1 antibody subset. New digital ulcers developed mainly in the anti-topoisomerase-1 antibody positive patients.
Conclusion: Bosentan may be used either alone or in combination with other treatments when digital ulcers worsen and may be expected to suppress the development of new ulcers and severe pain. Further preclinical studies are required shedding light on the etiopathogenesis of SSc and larger clinical trials are needed for more definitive treatment strategies.

Systemic sclerosis (SSc) is a complex autoimmune disease, characterized by cutaneous and visceral fibrosis with diffuse vascular pathology and which may be complicated by ischemic digital ulcers (DUs) in 35% to 50% of cases.(1-3) These ulcers, which may lead to pain, superposed chronic infections, auto-amputation, and finally hand function impairment, not only pose medical problems but also create psychological and social concerns.(4) Although the etiopathogenesis of the disease is not fully understood, increased endothelin-1 activity has been considered to have a role in the pathogenesis of the vascular component. Potential therapeutic agents for the management of DUs include calcium channel blockers, α-adrenergic inhibitors, angiotensin II-converting enzyme inhibitors, prostacyclin analogs, phosphodiesterase-5 inhibitors, and others.(5-8) Bosentan is a dual endothelin receptor antagonist, which binds to ET-A and B receptors, thereby inhibiting endothelin-1. Two extensive, multicenter, placebo-controlled studies have proved bosentan to be an effective treatment option in preventing new DUs and in the treatment of current DUs in relatively small series.(10,11) It also has favorable effects on micro- and macrovascular hemodynamics and the severity of digital fibrosis which have been demonstrated by improvements in venous occlusion plethysmography, flow mediated dilation and modified Rodnan skin scores, respectively. However, there is ongoing debate in respect of its use in Raynaud’s phenomenon secondary to SSc.(5,9-11) In this study, we aimed to investigate the effects of bosentan on the prevention and treatment of DUs in SSc patients.

This prospective and observational study which reflected our routine clinical experience was conducted between January 2010 and May 2013 at the Yıldırım Beyazıt University Medical School, Department of Rheumatology. A total of 30 patients (4 males, 26 females; mean age 49.6±15.4 years; range 23 to 71 years) were included who met the preliminary classification criteria of the diagnosis of SSc according to the American College of Rheumatology(12) and had a history of documented DUs treated with bosentan. Indications for the treatment with bosentan were vasodilatory therapy-resistant multiple marginal and ischemic gangrene ulcers. The SSc was classified as limited or diffuse cutaneous SSc according to the classification system described by LeRoy et al.(13) Patients were treated with bosentan 62.5 mg twice daily for the first month and 125 mg twice daily from the second month for a period of 24 months. At each evaluation visit, the number of new and existing DUs was scored. Liver function tests were administered monthly, and treatment was temporarily discontinued if levels of transaminases were elevated to three-fold the upper limit of normal. If these levels did not return to the normal range, active treatment was discontinued. Patients with chest pain, dyspnea or suspected syncope were evaluated by echocardiography. If systolic pulmonary artery pressure was >40 mmHg with echocardiography, right heart catheterization was applied. Pulmonary arterial hypertension (PAH) associated with SSc was defined as increased mean pulmonary arterial pressure ≥25 mmHg or pulmonary wedge pressure <10 mmHg as assessed by right heart catheterization. In addition, diagnosis of pulmonary fibrosis was established with decreased diffusing capacity of carbon monoxide and diffuse bibasilar lung fibrosis on computed tomography. Forced vital capacity/diffusing capacity of carbon monoxide ratio >1.6 and the presence of lung involvement on computed tomography were identified as type 3 pulmonary hypertension associated with interstitial lung disease.

Patients with liver or kidney disease, blood dyscrasias, diabetes mellitus, severe cardiopulmonary diseases, or scleroderma renal crisis were excluded. All patients were informed about the study procedure and their informed consents were obtained. The local ethics committee approved the study protocol. The study was conducted in accordance with the principles of the Declaration of Helsinki.

Overall, 33.3% (n=10) of the patients were classified with limited cutaneous SSc, while 66.7% (n=20) had diffuse cutaneous SSc. The clinical characteristics, laboratory findings, and systemic involvement of the patients are shown in Table 1. During the bosentan treatment period, eight patients (26.7%) developed new DUs and all were cases of diffuse cutaneous SSc. Twelve patients (40%) needed additional intravenous iloprost under bosentan treatment. These patients had critical digital ischemia (n=4) and newly developed DUs under bosentan treatment (n=8). Three patients (10%) developed PAH (two patients SSc-associated PAH and one patient interstitial fibrosis-associated PAH). There were no statistically significant differences at baseline, 12th month and 24th month Health Assessment Questionnaire scores between SSc subtypes (Table 1). Health Assessment Questionnaire scores improved both after 12 months and 24 months of treatment in SSc patients (p<0.001). Functional capacity did not worsen under bosentan treatment, both in patients with or without PAH; also, diffusing capacity of carbon monoxide and six-minute walking test significantly improved at the end of 12th and 24th months (Table 2). The patients positive for anti-centromere were predominantly classified as limited cutaneous SSc. Of the patients positive for anti-topoisomerase-1 antibodies, a high proportion was classified with diffuse cutaneous SSc. In addition to the bosentan treatment, patients with Raynaud’s disease received calcium channel blockers and enteric-coated aspirin. Patients with interstitial pulmonary involvement and patients with diffuse SSc received immunosuppressive treatment. Pulmonary fibrosis was most frequent in the anti-topoisomerase-1 antibody subset. New digital ulcers developed mainly in the anti- topoisomerase-1 positive patients. 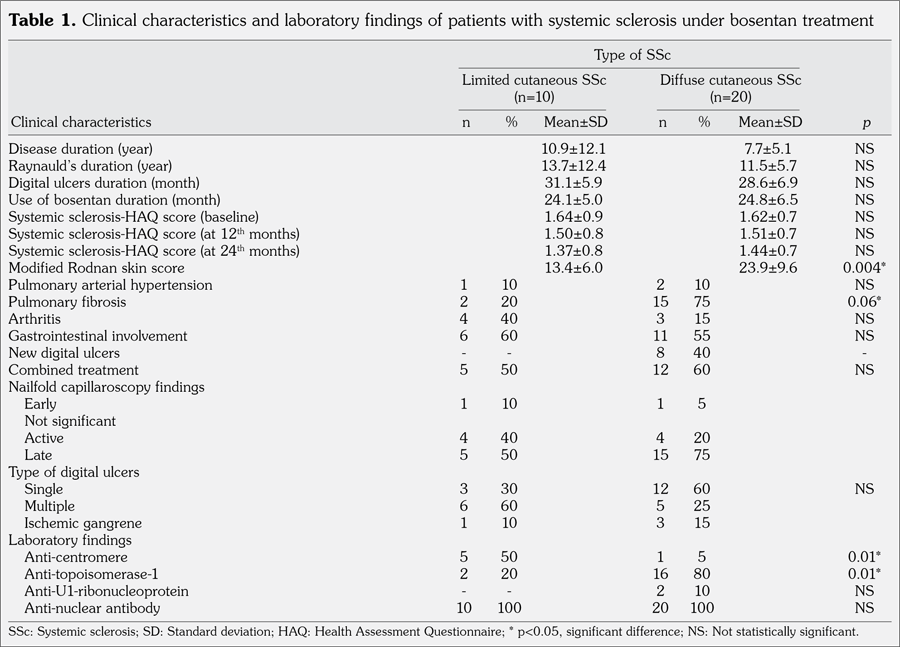 Table 2. Follow-up of patients with systemic sclerosis under bosentan treatment
×

In SSc patients, DUs are a common problem, which may become extremely debilitating. Bosentan has been reported in many studies to be clinically effective in the treatment of DUs and Raynaud’s phenomenon, and is therefore currently recognized as a standard treatment for ulcers in SSc patients.(7,9,14) In two large-scale clinical trials which described the efficacy of bosentan in treating DUs, it was determined that although the healing of existing ulcers was not promoted, initial occurrence was suppressed.(10,11,14)

In a previous large-scale study, it was reported that the development of new DUs was significantly reduced by oral bosentan 125 mg twice/day and this treatment was well tolerated.(10) Previous reports have recommended increasing the dose to 125 mg twice/day following initial dosage of 62.5 mg twice/day for four weeks. In this study, the number of cases was limited and it was a relatively short observation period. Although all patients were receiving treatment at doses known to be effective, eight patients under bosentan treatment developed new DUs and all of these patients had diffuse cutaneous SSc. In the RAPIDS-2 trial (RAndomized, double- blind, Placebo-controlled study with bosentan on healing and prevention of Ischemic Digital ulcers in patients with SSc), it was demonstrated that an approximately 30% reduction in the number of new DUs was achieved with bosentan treatment compared with placebo.(11) It has been reported that although pulmonary hypertension may be treated with up to 250 mg bosentan, DUs may be kept under control with a comparatively lower dose. In this study, 30 SSc patients were treated with bosentan for DUs and were followed up for a period of 24 months. Bosentan was seen to be safe and effective in these patients, although new DUs developed in eight patients during the follow-up period.

Three patients developed PAH (two patients SSc-associated PAH and one patient interstitial fibrosis-associated PAH). Since these patients developed PAH under bosentan treatment, iloprost and sildenafil were added to bosentan. Particularly in patients with ischemic gangrene and multiple marginal ulcers, bosentan treatment had no benefit in DU healing; therefore, iloprost was added to bosentan for healing effect.

Limitations of this study include the absence of a control group and the relatively small number of patients. In addition, no comparison of the bosentan treatment with other drugs, such as sildenafil or iloprost, was performed.

In conclusion, the results of this study have shown that bosentan may be used either alone or in combination with other treatments when DUs worsen and may be expected to suppress the development of new ulcers and severe pain. Further preclinical studies are required to clarify the etiopathogenesis of SSc while larger clinical trials are needed for more definitive treatment strategies.