The classic clinical triad of Klippel-Feil syndrome (KFS) -short neck, restricted neck mobility, and low dorsal hairline- is the result of congenital synostosis of a variable number of cervical vertebrae.(1) Persons with KFS and cervical stenosis may be at increased risk for spinal cord injury after minor trauma as a result of hypermobility of the various cervical segments. Also, clinicians should be aware of the characteristics of KFS when making an oral diagnosis and planning treatment.

In this case report, we described a variation of the KFS, accompanied by anomalies of the cervical vertebrae and other organs. To our knowledge, this is the first KFS diagnosed following a trauma.

A 55-year-old male patient admitted to our clinic because of chronic neck pain, headache, and one episode of syncope. These symptoms with a history of one year started after a trauma when the patient fell off his tractor, and suffered from a fracture of right seventh and eighth ribs.

Patient reported complaints of impaired hearing, snoring, and waking up occasionally with a sense of suffocation and shortness of breath for the last 30 years. He had history of alcohol abuse.

Cone beam computed tomography showed mucosal thickening in the left maxillary sinus due to a chronically maxillary sinusitis (Figure 3a, b) with no other pathological findings (Figure 3c, d). The analyses of the pharyngeal airway showed a narrowing of the pharynx (Figure 4a, b). The volume of pharynx was 32.3 mL, and the area of maximum constriction was 193.6 mm(2) (Figure 4c). 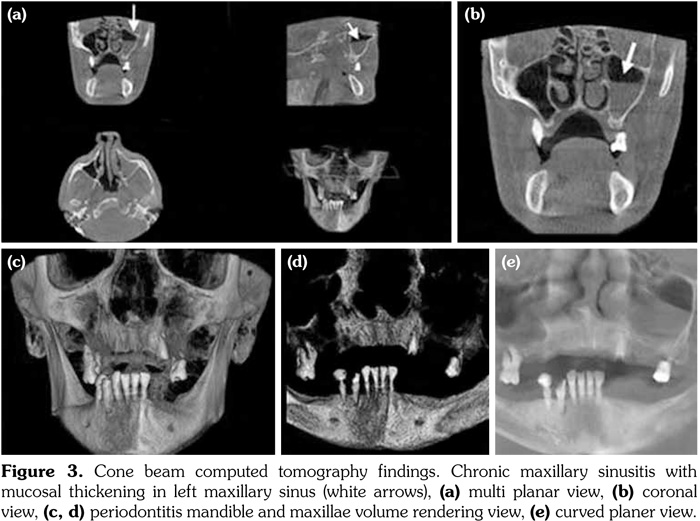 There is scarce evidence about KFS, which is described as a rare and little known syndrome, usually diagnosed after birth.(3) Most KFSs are never diagnosed, probably because the symptoms are bland.(4) Neurological problems may develop in 27% of these patients.(5) However, the age when neurological symptoms appear depend on the level of the cervical fusion. A fusion of C1-C2 tends to produce symptoms in the first decade, while fusion of the C2-C3 is associated with neurological symptoms in the third decade.(6) However, some reports indicate that the level of vertebrae fusion does not greatly affect the incidence of neurological symptoms.(5) A defect in level of the occiput to C1-C3 was the most frequently identified and produced most symptoms (n=462). Lesions below C3 and C4 were less likely to cause symptoms.(5) Our patient had C2-C5 fusion and his symptoms occurred in the sixth decade, after major trauma.

A significant central cord myelopathy after moderate(7) or minor(8-10) traumas were recorded in KFS. This is probably related to the fused segments and the resulting altered mechanical force transfer that makes the adjacent non-fused segments excessively mobile.(9,11) However, our patient had no central cord impairment after a severe trauma. This can be explained by the absence of hypermobility non-fused spinal segments due to degenerative changes and/or the appearance of neurological symptoms obviously depend on the level of fusion. Our patient was likely to develop a compensatory thoracic-lumbar kyphoscoliosis. Indeed, a review of 50 KFS patients showed an associated scoliosis in 60%.(12)

A variety of craniofacial anomalies have also been reported in KFS, few of which are quite common, such as cleft palate and bifid uvula (15%) and facial asymmetry (13%), whereas others are represented by isolated cases.(13)

Our patient showed mild face asymmetry accompanied by craniofacial anomalies such as rhinoscoliosis, high nasal bridge, inclined septi nasi, thin upper lip, and high arched palate. This patient is a rare KFS case describing nose anomalies.(14) It is unclear if rhinoscoliosis is a KFS associated anomaly or an independent variable. Further studies are necessary to evaluate if there is a higher incidence of rhinoscoliosis in KFS.

Klippel-Feil syndrome individuals without cleft palate tend to have high arched palate, as detected in our patient. A mandible hypoplasia occurs in a limited number of KFS(15) and can contribute to upper airway obstruction and obstructive sleep apnea. Our patient had sleep apnea but no mandible hypoplasia. Even if the volume of the pharynx is in agreement with average measuring,(16) a narrowing that is found in the level of the maximum constriction can be the cause of obstructive sleep apnea and also of breathing problems. Other causes of his sleep apnea such as chronic sinusitis, snoring, and evening alcohol intake must also be taken into consideration.

Furthermore, our patient was diagnosed as having a moderate to severe bilateral sensorineural hearing loss, the most common (43%) of hearing problems in KFS.(4)

This case is a good example of a rare characterization of KFS in elderly patients associated with multiple anomalies. Early diagnosis of KFS is critical in determining the risk of other associated diseases and neurological symptoms especially after trauma.