Rheumatoid arthritis (RA), which is characterized by joint pain, stiffness, and weakness that can lead to deformity and disability, commonly involve the hands and feet. It affects approximately 1% of the population, with a female to male ratio of 3:1.(1) The 2011 World report on disability found that nearly 11.9 million people worldwide have disability caused by RA.(2) Anti-cyclic citrullinated peptide (anti-CCP) antibody is more reliable than rheumatoid factor in diagnosing RA.(3) Anti-CCP test can accurately diagnose RA at a very early stage as compared to rheumatoid factor.

Vitamin D, which can be generated following ultraviolet light irradiation of the skin, is a secosteroid hormone involved in bone and calcium metabolism. It has long been recognized as an essential nutrient required for optimal absorption of dietary calcium and phosphate. Vitamin D deficiency is linked to development of bone- softening diseases, such as rickets among children, and osteomalacia and osteoporosis among adults. Concerns on vitamin D’s “non-classical” functions arose in the past decades. These non-classical functions include anticancer and cardiovascular actions, but prominent reports have also explored the association between vitamin D and the immune system.(4) Recent studies have demonstrated that vitamin D deficiency correlates with the appearance of type 1 diabetes mellitus and multiple sclerosis.(5) Vitamin D deficiency has been linked to a wider range of autoimmune conditions than multiple sclerosis and type 1 diabetes mellitus.(6-8) It has been demonstrated recently that vitamin D deficiency is involved in the pathogenesis of RA, as well as activity of RA.(9,10) In a meta-analysis, Song et al.(9) found three studies amounting to 215,757 patients that involved vitamin D intake and the onset of RA. Of those 215,757 patients, 874 eventually developed RA. They found that individuals with the highest level of intake from food had a 24% lower risk of developing RA than those in the lowest group. However, another study did not show an association between vitamin D intake and the risk of RA.(11) Thus, in this study, we aimed to assess the relationship between serum vitamin D and anti-CCP antibody levels, as well as disease activity in patients with newly diagnosed RA.

The study subjects consisted of 154 patients (66 males, 88 females; mean age 53.5±12.4; range 29 to 79 years) with RA who admitted to Zhejiang TCM & WM Hospital between January 2014 and June 2014. Patients eligible for the study were newly diagnosed RA patients with disease duration of less than one year and who had not been treated with non-steroidal anti-inflammatory drugs prior to our study. Patients with endocrine disease were excluded. All patients fulfilled the 2010 American College of Rheumatology/ European League Against Rheumatism RA classification criteria.(12) Meanwhile, a control group of 60 healthy subjects (25 males, 35 females; mean age 51.4±10.3; range 25 to 75 years) was investigated. Participants in this study did not receive vitamin D supplements. All procedures were in accordance with the ethical standards of the responsible committee on human experimentation and the Helsinki Declaration.

In the RA group; serum 25-hydroxy vitamin D (25-OH-D), anti-CCP antibody levels, and erythrocyte sedimentation rate (ESR) were measured, respectively. Only serum 25-OH-D levels were measured in the control group. Blood samples were drawn from cubital veins and fed into the collection tube. After centrifugation, serum was collected and stored under minus 20 degrees.

Serum 25-OH-D levels were measured in the clinical laboratory by an automated electro- chemiluminescent immunoassay from Roche Diagnostics. The sensitivity of the assay was less than 3.0 ng/mL. The recovery was approximately 100% for 25-OH-D. Within and between batch precision was less than 7.5% and less than 13.6%, respectively. Vitamin D status was defined as follows: ≥30 ng/mL, sufficiency; ≥21 ng/mL, <29 ng/mL, insufficiency; ≤20 ng/mL, deficiency.(13,14) Anti-CCP antibody assays were performed at our hospital in the Rheumatology Clinical Research Laboratory using a CCP ELISA kit (Shanghai Kexin Biotech Co., Ltd., Shanghai, China) according to the manufacturer’s instructions. For anti-CCP testing, a level of ≥25 relative units (RU)/mL was considered positive. 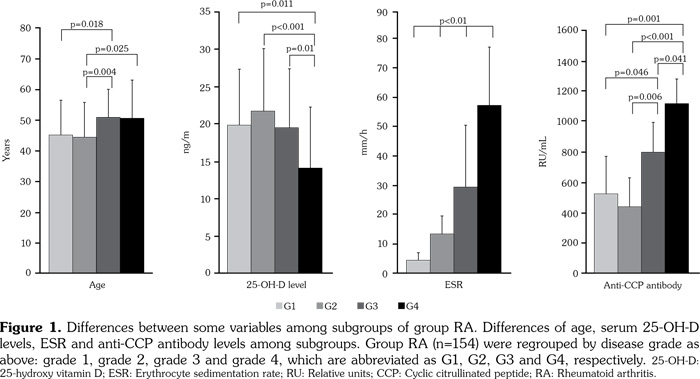 Our findings are significantly similar with those of a study conducted by Patel et al.(16) which covered 309 patients with inflammatory polyarthritis for less than four months. In that study, vitamin D level was lower in patients experiencing more disease activity at the early stage and after one year of follow-up and the incidence of RA was higher among the individuals with lower serum vitamin D levels. These patients had lower Health Assessment Questionnaire levels and more tender joints. In Abourazzak’s study,(8) serum 25-OH-D concentration was inversely associated with DAS, VAS, and number of tender joints. Their study also showed an inverse relationship between serum 25-OH-D level and the number of swollen joints, but this finding was not supported by our study. A meta-analysis of 215,757 participants and 874 RA cases showed an association between total vitamin D intake and RA incidence without between-study heterogeneity.(9) Individuals in the highest group for total vitamin D intake were found to have a lower risk of developing RA than those in the lowest group. Furthermore, available evidence in this study indicates that vitamin D level is associated with RA activity. Pincus and Sokka’ study(17) also showed an inverse relationship between ESR and serum vitamin D levels; however, this finding was not consistent with the results of a study by Zakeri et al.,(18) which also revealed a reverse relationship between serum 25-OH-D level and number of swollen joints.

In our study, about 48.7% of RA patients had vitamin D deficiency. In a recent study, the prevalence of vitamin D deficiency was reported to be about 51.9%.(19) In another study in Isfahan, this rate was reported to be about 50.8%.(20) Another study in the United States investigated 62 RA patients in terms of vitamin D and DAS28 levels and showed that about 61% of patients had low vitamin D levels (less than 30 ng/mL). An inverse relationship was also found between vitamin D level and high disease activity (DAS28 >2.6), while the relationship between the vitamin D level and controlled disease (DAS28 <2.6) was not significant. These results confirm correlation between high and moderate activity of disease and vitamin D levels.(21) In our study, results were significant between highest level of disease activity and the other levels.

Recent studies have focused on the immunologic activity of Vitamin D which is independent of its classical role in calcium regulation.(22-25) Animal models of autoimmune disease have shown beneficial effects of vitamin D as an immunosuppressant. Cantorna et al.(23) suggested that active vitamin D can be used to decrease incidence and severity of disease in murine models of human RA. Target cell responses to vitamin D are dependent on expression of the intracellular vitamin D receptor (VDR). When tumor necrosis factor transgenic mice are interbred with VDR deficient mice, the VDR deficient tumor necrosis factor transgenic mice have earlier onset of a more aggressive chronic arthritis, suggesting that signaling via a VDR is implicated in the pathogenesis of arthritis.(25) A recent study showed significant differences between patients and healthy controls in the frequency of BsmI and TaqI, suggesting BsmI and TaqI polymorphisms may be susceptibility risk factors for RA.(25) These studies suggested that vitamin D function in RA may also be dependent on its VDR expression level on the target cells or VDR polymorphisms. The relationship between serum vitamin D level and RA disease are more complex than we think.

Nonetheless, there are some limitations to this study in answering the question whether low vitamin D is a motivation factor or consequential for RA activity. Hong et al.(27) found that serum 25-OH-D levels were reduced in patients with RA and negatively associated with disease activity, interleukin 17/interleukin 23, and bone loss in RA, suggesting that vitamin D deficiency may play a role in the etiology of RA. We also showed negatively correlated serum 25-OH-D levels to the anti-CCP antibody and ESR levels, and disease activity. Furthermore, greater intake of vitamin D can lower the risk of RA.(9) In conclusion, it seems that low vitamin D level is a motivation factor rather than a consequence of RA activity. Serum 25-OH-D level was negatively correlated to anti- CCP antibody level and disease activity, which implied the therapeutic role of serum 25-OH-D in RA. Still, further studies on the pathogenesis of RA involving vitamin D are required.

This work was supported by grants from The Intramural Research Start-up Fund of Zhejiang TCM & WM Hospital and Science and Technology Plan Projects of Zhejiang Medicine and Health Program (2014KYA184).