Ankylosing spondylitis (AS) is a chronic rheumatic disorder characterized by sacroiliac joint and spine involvement with ascending pattern. Peripheral arthritis and extra-articular features are other characteristics which result in severe disability for patients and high medical and societal costs for the governments.(1) However, diagnosis of this disease is often made with delay in all regions of the world. Delayed diagnosis has been suggested as one of the several factors affecting the prognostic outcomes in AS. This is especially important since this disease has the longest diagnostic delay among other rheumatic diseases, i.e. approximately 5-10 years.(2) Recent studies showed that patients with shorter disease duration have better response to treatment compared with patients with longer disease duration.(3) The long disease duration as a result of diagnostic delay may cause patients to miss the chance of early appropriate treatment and consequently have poorer prognosis which include disability, limitation of spinal and hip movements, pain, poor quality of life, and functional status.

Human leukocyte antigen B27 (HLA-B27) status, educational level, sex, peripheral arthritis, extra-articular manifestations, and family history are some factors reported to affect diagnostic delay in AS; however, their results are inconsistent.(4-8) Improved knowledge about diagnostic delay status and associated factors in different regions of the world may help clinicians diagnose AS in earlier stages. Earlier diagnosis and efficient treatments with anti-tumor necrosis factor agents may prevent disabilities and improve the outcomes as well as decrease the government healthcare and non-healthcare costs.

Therefore, in this study, we aimed to evaluate diagnostic delay, factors which are related to diagnostic delay, and the effect of diagnostic delay on prognostic outcomes in terms of spinal and hip mobility, functional status, disease activity, quality of life, cervical rotation, tragus to wall distance, and sacroiliitis severity in an Iranian population with AS.

This survey was carried out as a prospective cross-sectional study on a total of 163 consecutive AS patients (129 males, 34 females; mean age 37.74±9.88 years; range 18 to 65 years) between May 2010 and March 2011. Patients met the modified New York criteria for AS,(9) and diagnosis was established by a qualified rheumatologist. Informed consents were obtained from all patients. The study protocol was compatible with the latest version of Helsinki declaration and approved by local ethics committee. A structured and pre-designed form was applied for gathering data about the details of disease and recording clinical assessments by the rheumatologist. These data included age, sex, educational level, age at disease onset, age at first diagnosis, disease duration, family history of AS, juvenile/adult onset of disease, peripheral arthritis, enthesitis, associated uveitis, inflammatory bowel disease, nephrolithiasis, history of infection prior to disease onset, HLA-B27, and HLA-B27 subtypes. Age at disease onset was described as the time when the first axial, peripheral arthritis and enthesitis symptoms appeared. Diagnostic delay was defined as the time interval between the first symptoms and correct diagnosis of AS. The HLA-B27 status and HLA-B27 subtypes had been detected in a previous survey by polymerase chain reaction with sequence specific primer with the use of HLA-B27 kit (Olerup SSP AB, Sweden).(10)

Prognostic assessments included functional status, disease activity, quality of life, spinal and hip mobility, fatigue, morning stiffness, finger to floor distance (cm), modified Schober (cm), chest expansion (cm), tragus to wall distance (cm), cervical rotation (degree), intermalleolar distance (cm), and sacroiliitis grading by pelvic radiography (grade II: bilateral erosion, grade III: unilateral or bilateral sclerosis, grade IV: unilateral or bilateral ankylosis). Functional status and disease activity were measured by Bath ankylosing spondylitis functional index (BASFI) and Bath ankylosing spondylitis disease activity index (BASDAI), respectively.(11,12) In addition, quality of life and spinal and hip mobility were measured by ankylosing spondylitis quality of life (ASQoL) and Bath ankylosing spondylitis metrology index (BASMI), respectively.(13,14) Fatigue was measured by BASDAI item 1: “how could you describe the overall level of fatigue/ tiredness you have?” (from 0: no fatigue to 10: maximum fatigue). Morning stiffness was measured by BASDAI item 5 (from 0: no morning stiffness to 10: maximum morning stiffness). Validated Persian version of BASFI (from 0: performed without difficulty to 10: impossible to perform), BASDAI (from 0: no activity to 10: maximum activity) and ASQoL (from 0: the best quality to 18: the worst quality) were used.(15,16) All measurements were performed at the same time of the day and by a single examiner for measurement uniformity.

Statistical analysis
Frequency (%), mean ± standard deviation, median and range were used for presentation of categorical and continuous variables, respectively. Spearman’s rho correlation coefficient was used for assessing the factors affecting diagnostic delay and also the relationship of diagnostic delay to prognostic outcomes. Cohen’s method was used for exploring the strongest relationship. For comparing diagnostic delay between two or more groups of patients, Mann-Whitney and Kruskal Wallis tests were used, respectively. All analyses were performed by PASW version 18.0 for Windows software program (SPSS, Inc., Chicago, IL, USA). P value of <0.05 was considered significant in all analyses.

Of the 163 patients with AS, 74.8% were HLA- B27 positive. The disease had juvenile-onset in 26 and adult-onset in 137 patients. Diagnostic delay longer than five years was observed in 85 patients (52.1%). Furthermore, 50 patients (30.7%) were diagnosed with a delay of at least 10 years. The average diagnostic delay was 7.88±7.17 years. Other characteristics and clinical measures were summarized in Table 1. 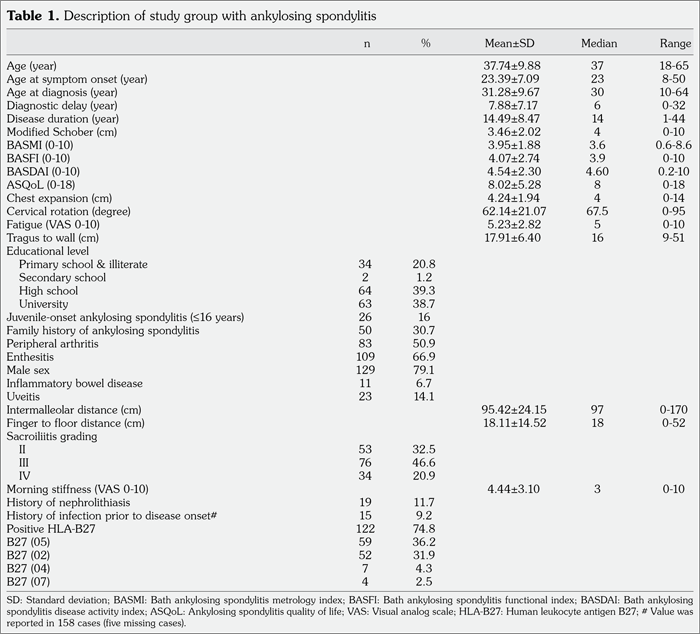 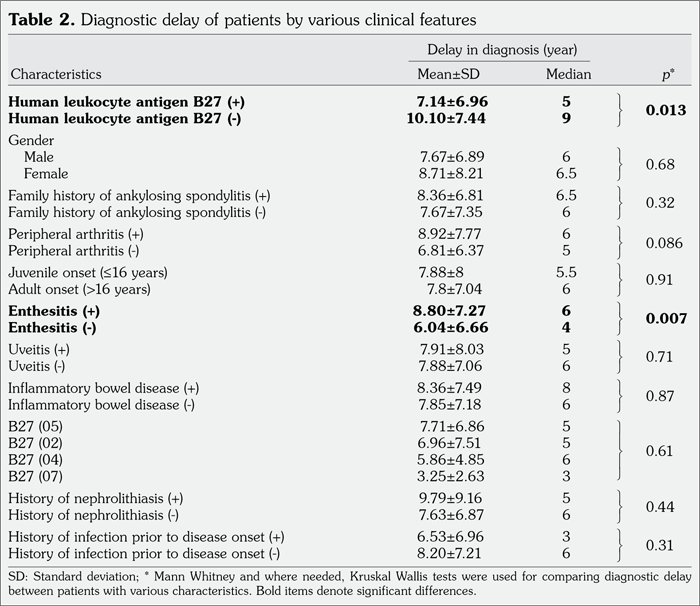 Table 3. Correlations of some characteristics with diagnostic delay
×

Recent research indicated a long interval between symptom onset and correct diagnosis of AS. The average diagnostic delay was as long as or even longer than that was seen in other areas including Morocco, Turkey, India, Korea, and East of Mediterranean region.(4,5,8,17,18) However, a study in Italy and also in North West of England showed a longer diagnostic delay.(19,20)

Among several factors evaluated in our survey, HLA-B27 was found as one of the factors which affect diagnostic delay. Positive HLA-B27 may lead to more progressive disease and subsequently, earlier diagnosis.(10) In addition, positive HLA-B27 may be a reason for evaluating patients more precisely and as a result, may guide physicians to make diagnosis earlier. Shorter diagnosis delay in HLA-B27 positive versus HLA-B27 negative patients has been shown in other studies as well.(5,6) However, Seo et al.(17) did not confirm such relationship.

The current study revealed correlations between diagnosis delay and the prognostic outcome measurements including ASQoL, BASFI, BASMI, BASDAI, chest expansion, finger to floor distance, intermalleolar distance, tragus to wall distance, cervical rotation, modified Schober, and sacroiliitis grading. The strongest correlation was between diagnostic delay and BASMI (Table 4). Less significant response to treatment owing to delayed diagnosis might be the reason for poorer prognosis in patients with longer diagnosis delay compared to patients with shorter diagnostic delay. These findings for BASDAI, BASFI, and BASMI in this survey are similar to findings of Aggarwal and Malaviya,(4) and Seo et al.(17) studies. Similar to our study, Seo et al.(17) and Salvadorini et al.(19) showed correlations between diagnostic delay and sacroiliitis severity in their surveys. In addition, relationship of diagnostic delay to BASFI and Bath ankylosing spondylitis radiological index but not to BASDAI was shown in Ibn Yacoub et al.(8) survey. However, Dincer et al.(5) did not find such differences between late and early diagnosis groups.

According to our results, diagnostic delay was consistently correlated with the prognostic outcome measurements. However, these relationships were not perfectly consistent with previous studies.

Wrong initial diagnoses such as herniated lumbar disk and use of conventional radiography instead of magnetic resonance imaging for diagnosis might be other explanations for delayed diagnosis in AS.(7,22) The fact that we did not consider these issues was among limitations of this study which should be noted in future surveys. Furthermore, another limitation was the lack of using radiological assessments, such as Bath ankylosing spondylitis radiological index, as prognostic outcome measurements.

In conclusion, negative HLA-B27, enthesitis and low educational level are the factors which affect diagnostic delay in Iranian patients with AS. Although, HLA-B27 may guide physicians to make correct diagnosis, negative HLA- B27 should not be a reason for neglecting clinical manifestations for proper diagnosis. The individuals with enthesitis should be evaluated with caution to prevent missing inflammatory diagnoses, particularly AS. Spending an adequate period of time for taking history and physical examination particularly in patients with low educational level might be essential to make diagnosis as early as possible. The longer the delay is in diagnosis of AS, the poorer will be the quality of life and function, and the more severe will be the disease activity and limitation of spinal and hip mobility. Therefore, emphasis should be placed on to make earlier diagnosis and consequently begin on time appropriate treatment for better prognosis in patients with AS.

Acknowledgments: The authors gratefully appreciate all participants in the study.