Acute Lymphoid Leukemia After Anti-TNF-alpha Treatment: A Case Report and Review of the Literature

The efficacy and safety of anti-tumor necrosis factor-alpha drugs have been shown in active ankylosing spondylitis cases that are resistant to traditional disease-modifying antirheumatic drugs. However, it is well known that these drugs may cause some complications as reactivation of tuberculosis and various hematologic malignancies. In this article, we report a 40-year-old male patient with ankylosing spondylitis who developed Philadelphia chromosome-positive acute lymphoid leukemia after treatment with tumor necrosis factor-alpha inhibitors.

Ankylosing spondylitis (AS) is a chronic systemic inflammatory disease of unknown etiology which primarily targets sacroiliac and axial joints. Major improvements have been achieved in its treatment since the last decade.(1) The efficacy of anti-tumor necrosis factor-alpha (anti-TNF-α) treatment has been shown in patients with resistance to traditional antirheumatic drugs.(2) They are effective both in controlling the clinical, laboratory and radiological findings and improving the functional capacity and quality of life. However, this may be accompanied by various side effects (infection, demyelinating disease, reactivation of tuberculosis and etc.(2) including the risk of causing and/or triggering malignancies. In recent years, hematologic malignancies such as lymphoma, acute myeloid leukemia (AML) and acute lymphoid leukemia (ALL) after various anti-TNF-α therapies have been reported.(3) Herein, we reported a Philadelphia chromosome-positive (Ph+) ALL patient with AS after the treatment of anti-TNF-α (etanercept and adalimumab).

A 40-year-old male was referred to our clinic with leukocytosis, anemia, and thrombocytopenia. He presented with back pain, weakness and weight loss in 2002, and was diagnosed with AS. The patient was given sulphasalazine 2 g/day and indomethacin 100 mg/day, and followed with control visits for nine years. In April 2011, an anti-TNF-α (etanercept) treatment (50 mg/week) was started because of disease activation and unresponsiveness to currently used drugs. In January 2012, treatment was switched to adalimumab (40 mg/2 week) for poor response. In November 2012, the patient was referred to our Hematology Department with progressive fatigue, joint pain, and asthenia. Physical examination showed significant pallor and palpable spleen 5 cm below the costal margin. According to clinical and laboratory results, the patient was diagnosed with Ph+ ALL. He was given imatinib mesylate (a tyrosine-kinase inhibitor) 400 mg/day and induction ALL regimen (including glucocorticoid, vincristine, anthracycline and asparaginase). He developed invasive fungal pneumonia during the induction treatment. Despite the broad- spectrum antibiotherapy, the patient died due to sepsis and respiratory failure.

In recent years, anti-TNF-α drugs have revolutionized the treatment of AS and made significant clinical, laboratory and radiological remission possible. However, the widespread and efficient use of anti-TNF-α treatment has brought along a great number of questions and discussions. To our knowledge, Brown et al.(4) were the first to report lymphoma development after anti-TNF-α treatment in 2002. Since then, anti-TNF-α treatment and malignancy development have been investigated more thoroughly. Although anti-TNF-α antibodies were shown to increase hematologic malignancy incidences in some studies,(5) no positive correlation was found in others.(3) In a meta- analysis of nine randomized controlled studies,(5) 3,943 rheumatoid arthritis patients were treated with infliximab/adalimumab and malignancy risk was found 3.3 times of normal population and significantly more common with higher doses of anti-TNF-α. However, this study is criticized about inhomogeneity among randomization groups, and treatment durations and agents. Another comprehensive study including 18,572 rheumatoid arthritis patients(6) indicated an increased risk of lymphoma with anti-TNF-α treatment. On the other hand, a recent study in AS and psoriatic arthritis cases found no correlation between lymphoma risk and anti- TNF-α treatment.(7)

In the literature, acute leukemia cases due to anti-TNF-α treatment were also reported; however, not as much as lymphoma.(8-16) First case was published in 2003.(8) The Food and Drug Administration declared 44 AML cases which developed under the treatment of anti-TNF-α drugs. No details of subtypes, survival, or demographic data were given.(9) The relevant case reports about acute leukemia after anti-TNF-α treatment published on MEDLINE are reviewed in Table 1.(10-16) Ten of the 13 reported patients who developed acute leukemia after anti-TNF-α had AML. AML development may be attributed to higher incidence of this disorder in adults; however, Ph chromosome positivity in all of the three ALL cases is interesting. A first case of Ph+ ALL in a patient receiving anti-TNF-α (infliximab) was described in 2003.(18) Then, Cesarini et al.(19) reported a second case in a patient receiving adalimumab in 2010. According to our knowledge, our Ph+ ALL patient represents the third case in the literature that developed in a patient treated with anti-TNF-α drugs. 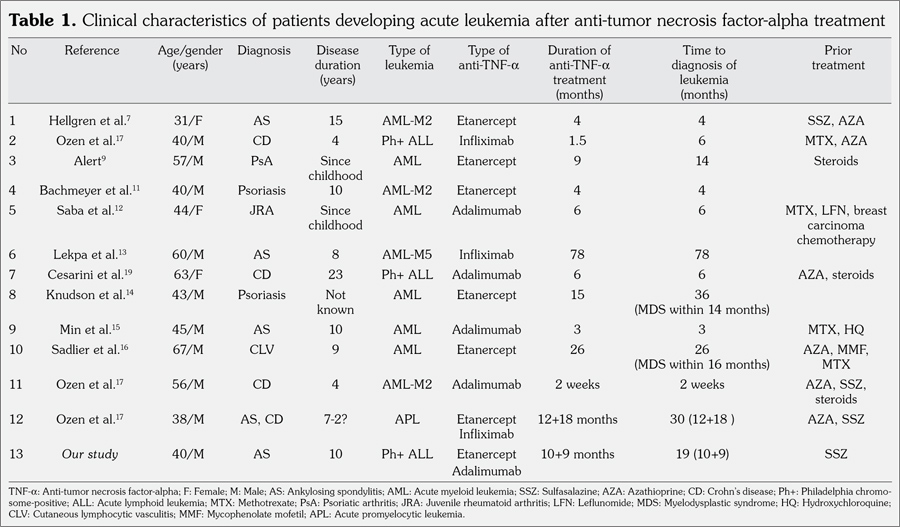 In conclusion, this article reports Ph+ ALL in a patient using anti-TNF-α treatment for AS. The relationship between anti-TNF-α and malignancies is controversial. Inconsistent results may be explained by various reasons such as patient selection, duration of disease, family history and using another antirheumatic drug. There might be other factors including interaction with other molecules that play a role in the etiopathogenesis of diseases, environmental and genetic factors, which require further studies.