Objectives: This study aims to investigate the relationship between systemic lupus erythematosus and pregnancy in pristane induced lupus mice model, including the pregnancy outcome for mothers and neonates.
Materials and methods: Sixteen female Balb/c mice 6-8 week-old were separated into two groups: pristane induced lupus (PIL) mice group that received a single intraperitoneal injection of 0.5 ml of pristane and healthy control (HC) group that received phosphate-buffered saline injection. At one month after injection, all mice were mated with 8-10 week-old male Balb/c mice. All mice from both groups were observed for body weight and survival. On the day of births; number of neonates born, birth weight, and length of neonates were calculated. Neonates were also monitored for survival rate and their ages along the study.
Results: There was no statistically significant difference in body weight before and after delivery, survival rate during pregnancy, number of neonates born, and gestational ages of mothers from both groups. Mothers began to die in the postpartum period. On third day after delivery, 0% of mothers from PIL group survived whereas 100% mothers from HC group survived (p=0.000). Of neonates born from PIL group, 15% survived at the end of fifth day after birth whereas 100% of neonates from HC group still survived (p=0.000). Neonates from PIL group also had significantly lower body weight and body length at birth compared to HC group (p=0.000 and p=0.000, respectively).
Conclusion: Maternal and neonatal death, low birth weight, and low birth length are complications of systemic lupus erythematosus at pregnancy in pristane induced lupus mice model.

Systemic lupus erythematosus (SLE) is an autoimmune disease with multiple organs manifestations including the kidneys, joints, hematopoietic organs, and nervous system. Immune system aberrations, as well as heritable, hormonal and environmental factors interplay in the expression of organ damage and clinical manifestation of the disease.(1) SLE predominantly affects women of childbearing age. Although patients with SLE are as fertile as women in the general population, their pregnancies may be associated with complications. Pregnancy and its outcome is a major concern to most SLE patients.

Queries regarding the risk of disease flares during pregnancy and chance of fetal loss are often raised.(2,3)

Pregnant patients with SLE have an increased risk complication of pregnancy. The incidence of pre-eclampsia in lupus pregnancies ranges from 5 to 38% in various reported series, which is higher than that of pregnancies in women without SLE.(4,5) Recent studies have provided information regarding the course of pregnancy in patients with lupus nephritis. Hypertension developed frequently (37-56%) during pregnancies in these patients. Pre-eclampsia may develop in up to 30% of SLE patients with preexisting nephritis.(1,4) Other researchers also found that women with SLE had a higher risk to develop opportunistic infections such as pneumonia or sepsis which also contribute to maternal death during pregnancy.(6,7)

Fetal outcome of SLE also have high risk complication. Pregnancies in SLE patients are characterized by an increased incidence of fetal wastage (abortions and stillbirths), prematurity, and intrauterine growth retardation.(1,4) The rates of abortion and stillbirths in lupus pregnancies vary from 6-35% and 0-22%, respectively, which are higher than that of the general population.(4) Active lupus nephritis, previous history of fetal death, and the presence of the antiphospholipid antibodies have been shown to be predictive factors for fetal wastages in lupus pregnancies.(5) Rahman et al.(8) in their study suggested that active renal disease is a significant predictor for fetal loss (p<0.012). Maternal hypertension was also identified as a significant statistical predictor for prematurity and intrauterine growth retardation.

Neonates that come from a mother with SLE have a high risk of neonatal lupus erythematosus syndrome. Neonatal lupus erythematosus is a syndrome consisting of congenital heart block, transient cutaneous lupus lesions, cytopenia, hepatic, and other systemic manifestations in children born to mothers with SLE, Sjögren’s syndrome, or other rheumatic diseases with a positive anti-Ro or anti-La antibodies.(1,9)

Limited studies have been conducted to monitor the risk of SLE in pregnancy and the fetal outcome. Low incidence ratio, ethical problems, and unwillingness to participate in studies still constitute obstacles. Thus, in this study, we aimed to investigate the relationship between SLE and pregnancy in pristane induced lupus mice model, including the pregnancy outcome for mothers and neonates.

All in vivo studies were undertaken at Pharmacology Laboratory of Brawijaya University Research Center. The studies and animal care have been approved by ethical committee of Brawijaya University with related codes of practice. Female virgin Balb/c mice (obtained from Pusvetma Surabaya, East Java, Indonesia) aged 6-8 weeks were housed under standard conditions and provided with food and water ad libitum. Mice were habituated to the holding room for a minimum of one week before undergoing experimental procedures.

After four weeks injection of pristane, female Balb/c mice were mated with 8 to 14 weeks old Balb/c mice with a male to female ratio of 1:2 on each cage. Females were inspected daily for vaginal plugs; sighting a vaginal plug was designated as day 0 of pregnancy. All mice from both groups were observed weekly for body weight and survival until day of birth and daily from birth until five days after birth.

To prevent biases, all neonates born were cared by foster mother. On the day of births; number of neonates born, birth weight and length were calculated. Neonates were also monitored for survival rate and their ages along the study.

From both groups, we used homogenous samples of mice which had similar characteristics to ensure that there were no biases in this research. As shown in Table 1, there were no differences in the clinical characteristics of both groups before pregnancy. In both HC and PIL groups, baseline maternal ages [6.50±0.926 weeks in HC group vs. 6.75±0.886 weeks in PIL group; p=0.552, confidence interval (CI) 95%] and maternal pre partum body weight (27.72±2.911 grams in HC group vs. 27.69±2.81 grams in PIL group; p=0.199, CI 95%) were not statistically significantly different (Table 1). 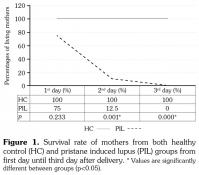 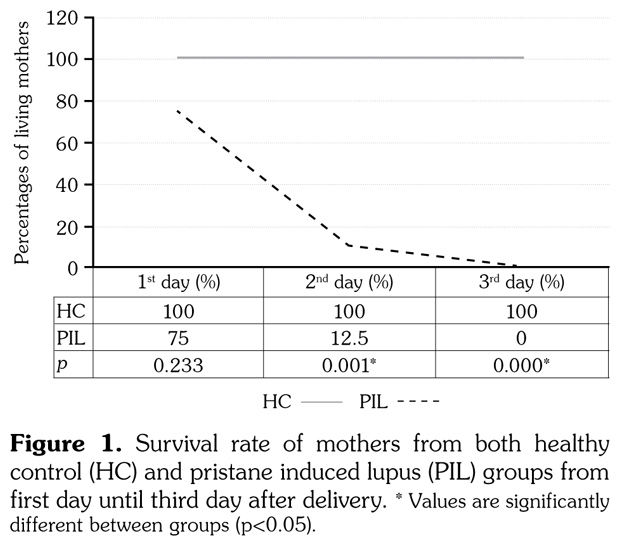 From these data, we were able to measure the average age of mothers after the delivery, as shown in Figure 2. We showed that all mothers from HC group survived to the age of more than five days postpartum whereas average age from PIL group was only 1.88±0.641 days postpartum (p=0.000, CI 95%). 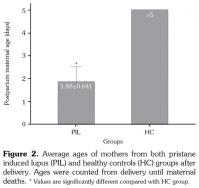 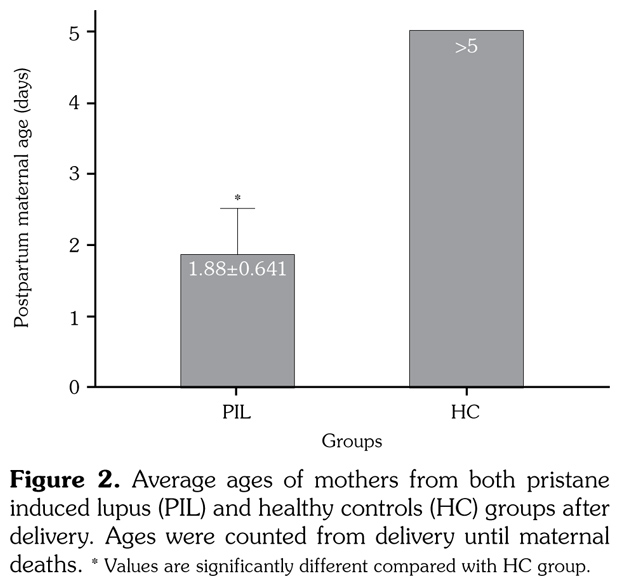 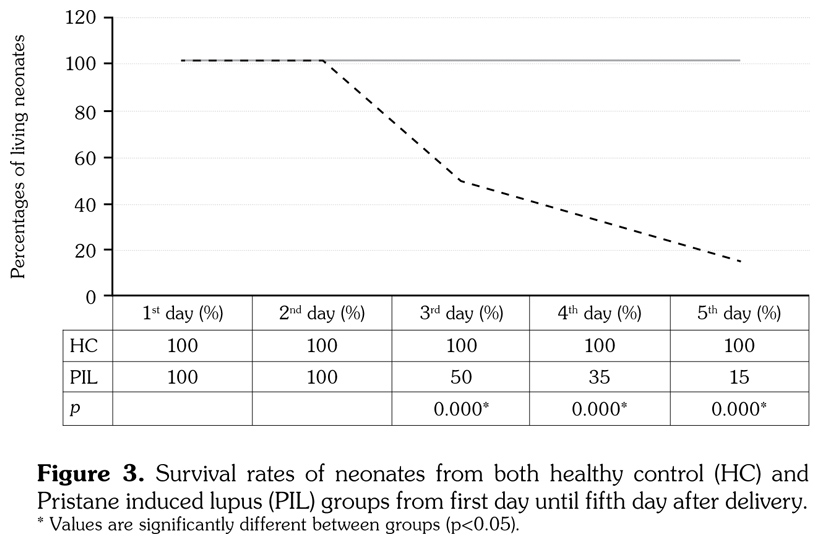 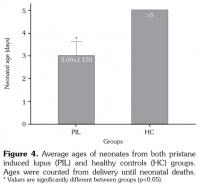 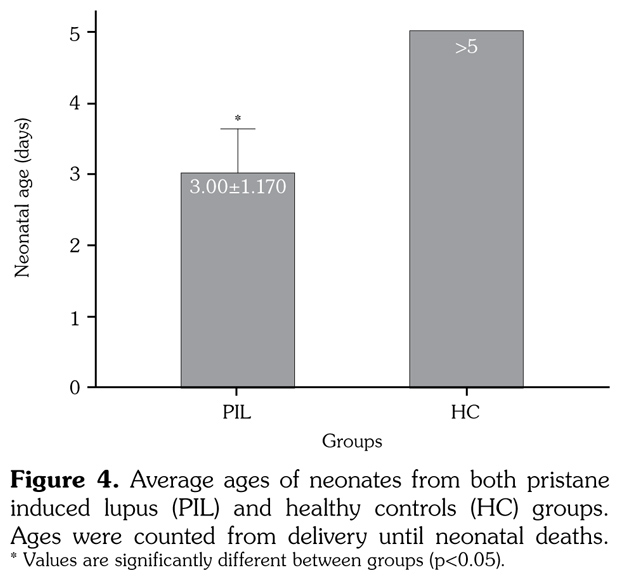 Neonates born from HC mothers had slightly larger size in appearance than neonates born from PIL group. Aside from the sizes, we did not detect any macroscopic abnormalities or differences between two groups. On the day of birth, all neonates from both groups were assessed for birth weight and length. Table 2 shows the differences of birth weight and length between two groups. We noted that birth weights in PIL group were significantly lower compared to HC group (1.563±0.037 grams in HC group vs. 1.145±0.031 grams in PIL group; p=0.000, CI 95%). Also, birth lengths of neonates measured from cranial-caudal were significantly shorter in PIL group compared to HC group as seen in Table 2 (3.868±0.046 cm in HC group vs. 3.699±0.067 cm in PIL group; p=0.000, CI 95%).

Although the outcome of pregnancy in patients with SLE has improved considerably in recent years, complications involving neonates and mothers with SLE remain to be a main topic for researches. In this study, we showed that the survival rate of mothers with SLE in PIL mice group decreased significantly compared to the healthy ones. Our research indicated that none of the mothers in PIL group survived whereas 100% of healthy mice were still alive until third day of postpartum period. In addition, the average age of mothers in PIL group was only 1.88±0.644 days whereas all mice mothers and neonates from HC group were alive until more than five days.

This result was similar with results of other researches published previously in which maternal death was a major complication in pregnant women with SLE.(1,4) There are many facts and theories which may explain the cause of death in pregnant mothers with SLE. Clowse et al.(6) suggested that women with SLE had a two to four-fold increased rate of pregnancy complications, such as preeclampsia and hematologic complications, than the non-SLE population. In addition, it was shown that the risk of maternal death was 20-fold higher than the non-SLE population and the cause of death was indicated as the increased risk of medical complications in pregnant women with SLE, such as sepsis and pneumonia. It was also demonstrated that pregnant mothers with SLE tend to have higher risk to get flares which may affect many organs and cause death.(2,3) Lupus nephritis and infections (mainly opportunistic disease) were suggested to be major causes of deaths in pregnant women with active SLE flares.(11)

Flares of lupus during pregnancy are generally attributed to the progressive increase in serum estrogen levels during pregnancy, especially in the third semester. Estrogens augment immunologic reactivity and this phenomenon are often cited as the basis to the increased risk of autoimmunity such as SLE in pregnant women.(3) Many studies suggested that estrogens can regulate the cytokine gene expression in different cell types, such as interleukin 6 (IL)-6, IL-10, IL-12, and IL-2.(12,13) A recent study also showed that estrogen increased the IL-4 production while decreasing IL-2 and interferon gamma secretion by T cells.(14) IL-4 is a cytokine which plays a key role in T helper 2 differentiation where T helper 2 is a major component which can contribute to the development of lupus nephritis.(15) Another possible mechanism for the increasing of flare during pregnancy may be the decreased Treg function in decidua and peripheral blood in pregnant women.(16)

In our study, all mother deaths due to SLE occurred in postpartum period, not during pregnancy period. We hypothesized that maternal deaths in postpartum period might be the result of the accumulation of tissue organ damage which occurred during pregnancy until the time of delivery or something happened in mothers’ body after delivery. A national study done by Clowse et al.(6) showed that hematologic complications are common among pregnant SLE women. Anemia was diagnosed in over 12% of SLE pregnancies at the time of delivery. Risk of venous thromboembolism was five to eight-fold higher and the risk of stroke was 6.5-fold higher for women with SLE compared to other women after delivery. Similar results showed that postpartum hemorrhage and fever postpartum were significantly higher in mothers associated with SLE. Furthermore, it was demonstrated that mothers with SLE had a higher risk to develop opportunistic infection and sepsis during postpartum period.(7)

During postpartum period, levels of cortisol are at highest level.(17) Cortisol is a powerful and important modulator of the immune system. Cortisol can suppress the activity of immune system by many ways. While it was shown that low levels of cortisol might contribute to a higher disease activity in SLE, other researches stated that higher levels of cortisol was associated with significantly higher mortality due to septic shock. Higher incidence of fever and sepsis that may develop during postpartum period might be due to this high level of cortisol. A stress condition due to disease activity of SLE might also contribute to increased cortisol levels.(18,19)

infarctions and consequent fetal hypoxia. This condition may develop due to many factors, such as sticky platelet syndrome, pregnancy-induced protein S deficiency, increased inflammatory factors related to SLE disease activity, hyperhomocysteinemia due to folate deficiency, and antiphospholipid antibodies.(1,24)

In conclusion, this study has shown the complications of pregnancy in mouse models of SLE, reporting some facts regarding the high mortality rates of mothers and neonates and also low birth weight and length of neonates born from mothers with SLE. These conditions may also develop in poorly treated human mothers with SLE. However, their causes are still not clearly understood. Autopsy and histopathological studies, which were not performed in the present study, may help to detect these causes. Further research is needed to fully understand the placental pathology and also the cause of death in pregnancies with SLE. Understanding the cause of death, pathology, and mechanism involving SLE in mothers and infants may help researchers to comprehend the pathogenesis of SLE during pregnancy and also assist physicians to determine how to treat pregnant SLE patients to control possible future complications.