Prevalence of Extraglandular Manifestations in Patients With Primary Sjögren’s Syndrome in Southern Norway: A Comparison to the Literature

Objectives: This study aims to investigate the prevalence of extraglandular manifestations (EGM) in a group of Norwegian patients suffering from primary Sjögren’s syndrome (pSS) and compare these findings with the literature.
Material and methods: Fifty-three female patients (mean age 60±11.6 years; range 33 to 85 years) fulfilling the clinical criteria for pSS were included in the study. To investigate the prevalence of EGM, a PubMed search from April 1976 to August 2012 identified 100 relevant publications by 88 authors, comprising a total of 14,861 pSS patients. An attempt was made to compare the obtained results regarding the prevalence of EGM with our results.
Results: In our study group, mean prevalence rate of EGM was 42.1% with a range from 0 to 92.5% compared to the range of 0.8 to 94% in the PubMed reports on EGM. Epidemiological studies involving large groups of patients tend to yield lower prevalence of EGM than studies based on a smaller sample size. We were unable to compare the reports of prevalence of EGM in patients with pSS due to different methodologies and classification criteria applied in the different studies.
Conclusion: The prevalence of pSS in this study was within the range of that reported in the literature. Due to methodological issues, we were unable to compare reports of prevalence of EGM in pSS. Our findings suggest that studies including larger sample sizes may be subjected to underreporting.

Sjögren’s syndrome (SS), an autoimmune exocrinopathy with unknown etiology, is considered to be one the most common systemic inflammatory connective tissue diseases. A prevalence ranging from 0.04 to 0.66% has been reported for primary Sjögren’s syndrome (pSS)(1,2) depending on the investigated populations and the classification criteria used. PSS affects particularly females in the fourth and fifth decades of life, with a female/male ratio of 9:1. The disease mainly affects the exocrine glands and usually presents itself as a persistent dryness of the mouth and eyes, resulting in functional impairment of the lacrimal and salivary glands due to lymphocytic infiltration and a subsequent loss of glandular tissue. Extraglandular organs may be complicated by the development of extraglandular involvement and organ-specific autoimmune disease.(3) As patients with pSS may have involvement of many organs beyond the exocrine glands, the clinical manifestation of pSS is divided as exocrine gland features and extraglandular manifestations (EGM),(4) the latter being experienced by a relatively high number of patients.(5-7) The development of other types of autoimmune diseases such as rheumatoid arthritis and systemic lupus erythematosus among patients with SS is also frequently observed.(8,9) In this study, we aimed to investigate the prevalence of EGM in a group of Norwegian patients suffering from pSS and compare these findings with the literature.

Fifty-three female patients (mean age 60±11.6 years; range 33 to 85 years) were included in the study. All of the patients fulfilled the clinical criteria for pSS(10) and data related to EGM was extracted from their journals, which was diagnosed on the basis of both subjective symptoms and objective signs, i.e. positive biopsies of minor labial salivary glands and pathological unstimulated salivary flow (≤0.1 mL/min).

To investigate the prevalence of EGM, a PubMed search from April 1976 to August 2012 identified 100 relevant publications by 88 authors, comprising a total of 14,861 pSS patients. An attempt was made to compare the obtained results regarding the prevalence of EGM with our results.

Table 1. Summary statistics from studies included in PubMed search reporting on prevalence of extraglandular manifestations and our own results
× 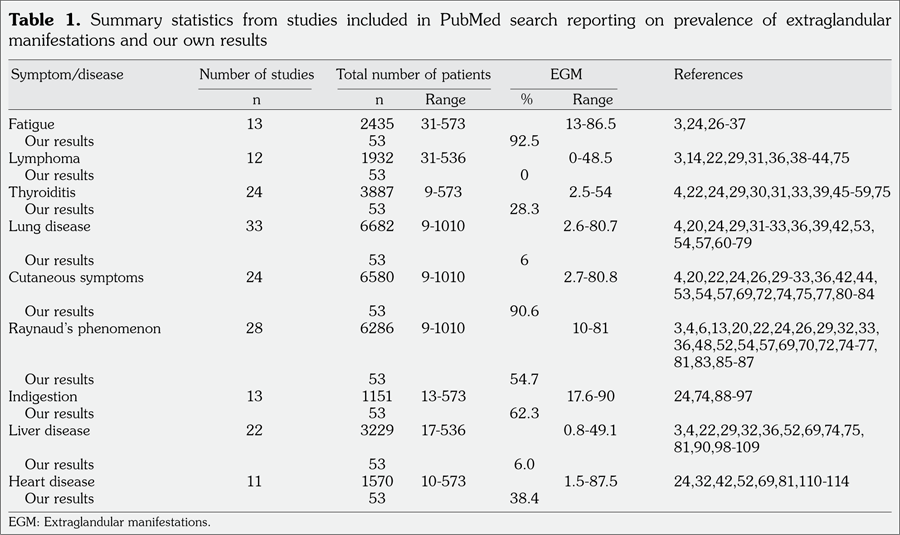 There was a significant negative correlation between the number of participants in the PubMed studies and the frequency of EGM (Spearman’s correlation coefficient =-0.42; p<0.001) (Figure 1). 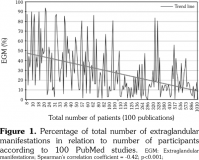 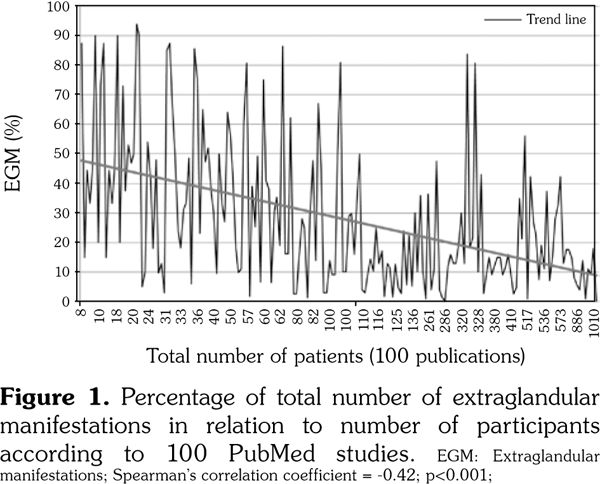 Clinimetrics, tools for assessing or describing symptoms, signs, and laboratory findings by means of scales, indices, and other quantitative instruments were not consistently used in the reviewed publications in PubMed on SS and EGM. The abundance of different measurement instruments in specific fields hampers the comparison of study results, and clinimetric properties are population and situation dependent.(11) In diagnosing pSS, there are defined indices(12) and scales for EGM.(13) Other types of EGM are usually diagnosed on the basis of both subjective symptoms and objective signs. Quantitative assessment of both clinical disease activity and organ damage in SS patients has been proposed.(14,15) Also, a damage index and disease activity index, i.e. scoring systems for the assessment of disease damage and disease activity in SS patients were proposed.(15,16) There is a need for validated indexes that evaluate disease reversible activity and permanent damage.(13)

There is no agreement concerning the sets of classification criteria for SS.(17) When the San Diego criteria are used, only 15% of patients fulfilling the European criteria for SS(10) will be diagnosed as SS - a fact that must be considered when evaluating reports on SS.(18) According to the classification criteria of the American-European Consensus Group,(19) the prevalence of pSS is far lower than previously assumed, and the reported male/female ratio of 1:9 seems to lie more in the range of 1:20.(20) Use of the American-European Consensus Group criteria will probably result in the participation of fewer males, as well as younger patients in general, and more severely ill patients in future cohort investigations.(21) Information regarding age at disease onset has changed over the last decade, as recent studies are indicating an onset age of approximately 45 years, compared to 56 in earlier studies.(21)

There is a limitation of studies on EGM in pSS in the completely healthy (asymptomatic) control groups of individuals: “It is not feasible to assemble sufficiently large, population- based control groups of completely healthy individuals”.(22) Variations detected by Sjögren’s International Collaborative Clinical Alliance Registry(22) in the actual populations, recruitment sources, investigation methods as well as the inclusion criteria and definitions regarding organ involvement utilized by the various investigators may, together with environmental factors, genetic, and race differences, be the causes for such differences. Furthermore, there is a relationship between the number of systemic autoantibodies and the number of EGM in pSS with a high prevalence of anti-Sjögren syndrome A antigen, anti-Sjögren syndrome B antigen, anti-nuclear antibodies, and immunoglobulin M-rheumatoid factor antibodies, indicating that a more disturbed immune system (as characterized by the presence of hypergammaglobulinemia and multiple autoantibodies formed by hyper-reactive B-cells) may result in more EGM.(23)

The number of patients in our clinical investigation may be limited to draw firm conclusions; however, our results support those reported in the literature. Similarly, 42 of the 100 publications in PubMed had 53 or fewer patients. The percentages of EGM in our study were generally higher compared to the percentages drawn from PubMed but still within the range of PubMed percentages (0.8 to 94%, Table 1). This difference may be due to the diagnostic criteria utilized, i.e. whether the diagnosis was based on the patients’ subjective report or on objective medical information. Also, the selection of patients may have been of importance.

In their study, Lin et al.(24) showed systemic detriment in as much as 91.4% of inpatients with pSS. This high percentage was explained by the application of more advanced methods for diagnosing early organ damage. Another explanation may be that this particular group of pSS patients were more severely ill, since hospitalized. Our patients came from a private dental clinic and symptoms/diagnoses were extracted from the patients’ journals in which diagnosis was made on the basis of both subjective symptoms and objective signs, which again may explain the diverging prevalence of EGM.

One unexpected finding has been that according to the PubMed search, studies with higher numbers of investigated patients resulted in decreased prevalence of EGM, as compared to studies with fewer number of patients (Figure 1). It is tempting to speculate that the reason for this lower prevalence in studies with more participants may be that the time allocated for individual examinations may have been shorter due to the high number of participants. The presumed time limitation might thus have resulted in less scrutiny. Another explanation may be that only findings based on objective medical investigations were used in those studies and not self-reports, which may underestimate the prevalence of some systemic disorders.(25) If so, this raises a question towards epidemiological studies based on a vast number of patients. That is, can a smaller group of examined patients raise the quality of the investigation? In our study where we had a relatively low number of participants with a relatively high number of reported EGM, it was possible to allocate ample time for completion of the questionnaire. Nevertheless, decreasing prevalence of EGM with increasing number of participants in epidemiological studies needs to be considered when evaluating the prevalence of EGM in pSS patients, which again calls for further investigation. In this study, our objective was to compare our results with the mean prevalence found in the PubMed investigation; however, based on the above discussion, it is difficult to make a reliable comparison of EGM prevalence rates.

In conclusion, our extensive review of 100 publications from Asia, Europe, Africa, and America shows that EGM in patients suffering from pSS is common. There was a significant range of prevalence in the PubMed reports on EGM. The use of different classification criteria and lack of control groups in some studies should be taken into consideration regarding the data from the studies included in this article. Also, it should be kept in mind that epidemiological studies involving large groups of patients tend to yield lower prevalence of EGM than studies based on a smaller sample size.