Objectives: This study aims to investigate whether clinical measures of disease activity and function in ankylosing spondylitis (AS) and inflammatory bowel disease (IBD) are associated with matrix metalloproteinase-3 (MMP-3), matrix metalloproteinase-9 (MMP-9) and tissue inhibitor of matrix metalloproteinase -1 (TIMP-1), and if MMPs can be more useful than C-reactive protein and erythrocyte sedimentation rate in predicting disease activity in AS.
Patients and methods: MMP-3, MMP-9 and TIMP-1 levels were measured by ELISA in 20 patients with AS, 20 patients with IBD, 20 patients with IBD and AS (35 males, 25 females; mean age 38.1 years; range 19 to 62 years), and 20 healthy volunteers (10 males, 10 females; median age 38.5 years; range 24 to 63 years) as a control group. Bath Ankylosing Spondylitis Disease Activity Index, Truelove-Witts activity criteria for ulcerative colitis, and Crohn's Disease of Activity Index scoring systems were used.
Results: Highest MMP-3 level was in IBD group (33.51±59.56 ng/mL, p<0.045). MMP-3 levels were significantly higher in patients with IBD and IBD+AS than in patients with AS (p<0.007 and p<0.035, respectively). Highest MMP-9 levels were in the control group (10.35±2.61 ng/mL, p<0.48). MMP-9 levels were higher in AS group patients than those in IBD and IBD+AS groups, but the difference was not statistically significant (p<0.494 and p<0.260, respectively). Highest TIMP-1 levels were in the IBD group (8.11 ng/mL, p<0.006). TIMP-1 levels of IBD group were significantly higher than both AS and IBD+AS groups (p<0.033 and p<0.008, respectively). A statistically significant correlation was detected between serum MMP-3 levels and disease activity and Bath Ankylosing Spondylitis Disease Activity Index score in patients with AS (r=0.841, p<0.05).
Conclusion: We concluded that serum MMP-3 levels may be a better biomarker than C-reactive protein and erythrocyte sedimentation rate in showing disease activity in AS.

Extra-intestinal involvement is a common manifestation in Inflammatory Bowel Disease (IBD). Joints are the most common site of involvement and the co-existence of IBD with spondylitis or peripheral arthritis (Asymmetric arthritis on lower extremity joints) is considered as Spondiloarthropathy (SpA), “enteropathic arthritis” or “arthritis related to IBD” according to the “European Spondiloartropathy Study Group” criteria.(1,2) The pathogenesis of extra-intestinal findings in IBD is poorly understood. Current theories suggest the impairment of mucosal immunoregulatory mechanisms in IBD, resulting in the transport of luminal content antigens to the systemic circulation. Also, lack of intestinal mucosal barrier protection mechanism, mucosal secretion of immunoglobulin A (IgA) and defense mechanism of mucosa against foreign proteins in IBD contribute to dysfunction of immune regulation.(2)

Secondary to this predisposing condition, the transport of cytokines, endothelial adhesion molecules, fibrinogen, reactive oxygen metabolites and many other antigens that may arise as a result of intestinal inflammation into the systemic circulation contribute to the extra-intestinal findings in distant organs.(3) Moreover, intestinal trauma leading to disorders on cell surface and intercellular permeability can result in patients developing inappropriate inflammatory responses to self proteins and environmental factors.

Recent studies have reported the impact of matrix metalloproteinases (MMPs) and their tissue inhibitors on the regulation of intestinal barrier protection mechanism as well as new ulcer formation. These proteins have been shown to be associated with disease activity as well as extra- intestinal finding development.(4)

The function of MMPs, a family of Zn2+-dependent endopeptidases, in the degradation of extracellular matrix components during tumor invasion and metastasis as well as their role in the processes of tissue destruction and remodeling during inflammation have been proposed.(5-7) The natural inhibitors of MMPs are called tissue inhibitors of metalloproteinases (TIMPs). These proteins block enzyme activity by binding to metalloproteinases with great affinity. Their effects on MMPs during tumor progression are twofold; beneficial thus inhibiting MMPs and impairing angiogenesis and harmful by facilitating cancer cell generation and growth.(8-10)

Inflammation of the mucosa in IBD patients has been linked with TIMP expression, correlating inversely with the production of proinflammatory cytokines and the grade of inflammation.(11,12) The sensitive balance between MMPs and TIMPs defines many physiological processes of the gut as well as severity of articular cartilage damage.(8,9,13)

The effects of MMPs and their tissue inhibitors on disease activity, erosion, and tissue reconstruction in ankylosing spondylitis (AS) has been previously reported.(13) A study which investigated the association between serum levels of MMP-3, macrophage colony stimulating factors, and disease activity showed that these molecules are more useful than C-reactive proteins (CRP) and erythrocyte sedimentation rate (ESR) in predicting disease activity in AS.(14)

Patients who visited the Out-patient Department Clinics of the Ankara University School of Medicine, Department of Internal medicine, Division of Rheumatology and Gastroenterology between June 2011 and July 2012 were enrolled. The study group consisted of a total of 60 subjects (35 males, 25 females; mean age 38.1 years; range 19 to 62 years) including 20 Turkish AS patients who fulfilled the 1984 modified New York criteria,(14) 20 IBD patients, 20 IBD and AS patients, and 20 age-matched Turkish healthy volunteers (10 males 10 females; median age 38.5 years; range 24 to 63 years) as a control group. The European spondyloarthropathy study group criteria(1) were used for the diagnosis of spondiloarthropathy. Before the study, written informed consents were obtained from all participants. The study protocol was approved by the local ethics committee and was in accordance with the 2008 Helsinki Declaration.

Age, gender, age of onset of disease, disease involvement, complications (if any), disease activity, treatment protocols and history of therapies with dates were recorded after each appointment. Disease localization and severity were noted according to recent endoscopy reports in patients’ files.

We evaluated disease activity in AS patients by using the Bath Ankylosing Spondylitis Disease Activity Index (BASDAI). The Truelove and Witts criteria were used for evaluation of disease activity in ulcerative colitis (UC) patients, and the Crohn's Disease of Activity Index (CDAI) for patients with Crohn's disease.(15-19) BASDAI scores were calculated independently from treatment in AS and AS+IBD groups to evaluate the association between MMP-3, MMP-9, TIMP-1, ESR, CRP, and BASDAI scores.

Eight milliliter of blood obtained from ante- cubital veins of all patients were allowed to clot in heparin free tubes for 30 minutes, and were then centrifuged at 3000 rev/min for 15 minutes. The sera were frozen at -80 °C immediately after sample collection. Serum concentrations of MMP-3, MMP-9 and TIMP-1 were measured with a quantitative sandwich ELISA (Biovendor Human MMP-3 and eBioscience Human MMP-9, TIMP-1) tool kit according to the manufacturer’s instructions. Microplates were read on the EL 312 Microplate ELISA reader at 450 nm spectrophotometrically. ESR levels were measured automatically by Kimased Auto 60-Vacutest Kima system (Via dell ́Industria, Arzergrande (PD), Italy), and CRP levels were measured using the BN II nephelometer (Dade Behring, Siemens Healthcare Diagnostics Inc., USA).

Statistical analysis
Statistical analyses were carried out using the SPSS statistical package for windows, version 15 (SPSS Inc., Chicago, IL, USA). Categorical variables were expressed as percentages and frequencies, continuous variables as median (minimum- maximum). Normality of the data was tested by using the Shapiro-Wilks test. Since most of the data were not in normal distribution, non- parametric methods were used for data analysis.

Correlations between BASDAI scores and MMP-3, MMP-9, TIMP-1, ESR, and CRP were demonstrated with the Spearman’s rank correlation test. Correlation between BASDAI scores and disease severity was analyzed using the Mann-Whitney U test. Receiver operating characteristic analysis was used to compare the whole spectrum of sensitivity and specificity of different markers. Statistical significance was accepted at a p value of <0.05.

The mean duration of disease was 6.3 years. Table 1 demonstrates the demographics and clinical characteristics of the subjects from all four groups involved in the study. Serum samples were available from 80 subjects at baseline. No statistically significant differences were observed among the four groups in terms of age and gender. Disease severity in AS patients was as follows; 20 subjects had mild disease (BASDAI <4) and 20 patients had moderate or severe disease (BASDAI scores ≥4) (Table 2).

The IBD+AS group consisted of 20 subjects including 10 patients with Crohn’s disease and 10 UC patients. Of the 10 patients with Crohn’s disease, eight had mild disease whereas two had mild-moderate disease according to the CDAI. The Truelove and Witts criteria which was used to assess disease severity in the 10 UC patients revealed only one patient with mild disease, four with moderate disease, and five with severe disease.

The highest MMP-9 antigen levels were seen in the control group (10.35±2.61 ng/mL, p=0.048). MMP-9 levels in AS group were higher than both IBD and IBD+AS group but the difference was not statistically significant (p=0.494 and p=0.260, respectively). The higher MMP-9 antigen levels in the control group when compared to patients in the AS or IBD+AS who were on anti-TNF therapy can be explained by the decreasing effect of anti- TNF therapy on MMP levels.

Tissue inhibitor of matrix metalloproteinase-1 antigen levels were highest in the IBD group (8.11 ng/mL, p<0.006). TIMP-1 levels were also significantly higher in IBD group than both AS and IBD+AS groups (p=0.033 and p=0.008, respectively). 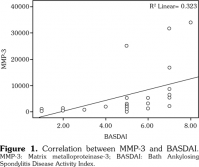 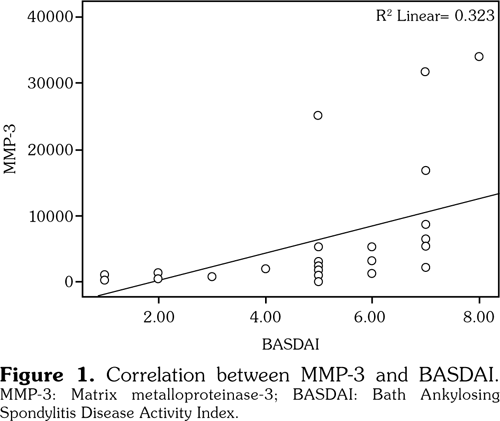 The association of MMPs and TIMP-1 with disease activity and development has barely been investigated in the same experimental setting in SpAs and IBD. While MMP-9 is known to predominantly function in perivascular and intravascular compartments, MMP-3 activation is rather observed in sublining layers. Immunohistochemical studies of synovial tissue samples in SpA patients, conducted by Vandooren et al.(21) reported expression of MMP-1, MMP-2, MMP-3, MMP-9, TIMP-1 and TIMP-2 on both synovial (lining) and subsynovial (sublining) layers. A statistically positive correlation between MMP expression and inflammatory cellular infiltration, polymorphonuclear cells and vascularity has been shown.(20,21)

Association of disease activity in AS and MMP-3 has already been reported from cohort studies in Beijing, Belgium, and Taiwan. The Beijing cohort showed a significant correlation between MMP-3 and BASDAI scores but revealed no difference when compared with healthy control groups. Likewise, MMP-3 levels were shown to be associated with peripheral involvement in AS according to the Belgian cohort which investigated the role of MMP-3 antigen levels in patients with axial or peripheral involvement.(22)

In agreement to previous studies, when we considered possible associations between serum antigen levels of MMP-3, MMP-9, TIMP-1, ESR and CRP, and disease activity in AS, elevated levels of MMP-3 showed significant positive correlations with BASDAI scores in AS and AS+IBD groups. ESR and CRP values were not statistically correlated with BASDAI. These results are consistent with that of the Taiwan cohort.(23)

We confirm the previous observations made by Lakatos et al.(4) in their study which demonstrated that serum antigen concentrations TIMP-1 were significantly increased in patients with UC and CD compared to controls. These data are in agreement with our study in which TIMP-1 antigen levels were highest in the IBD group (p<0.006).

In our study, MMP-9 antigen levels were observed to be highest among the control group (10.35±2.61 ng/mL, p=0.048). In addition, although not statistically significant, MMP-9 antigen levels were higher in the AS group compared to both the IBD group and IBD+AS group (p=0.494 and p=0.260, respectively). The greater number of AS patients on anti-TNF therapy can be an explanation for this result. In addition, other therapies such as steroids, sulfasalazin, azathioprine, cyclosporine can affect these results in IBD and IBD+AS.

In conclusion, our data confirm the role of MMP-3 as a potential biomarker of disease activity in AS. Together with other MMPs and TIMP-1, these biomarkers appear to be actively involved in the inflammatory processes in AS and IBD. Alongside with other traditional biomarkers such as serum ESR and CRP, serum MMP-3 might be useful additional biomarkers in the assessment of disease activity in AS. The major limitation of this study was the small sample size, and the fact that some levels were significantly low. For this reason, studies with larger sample sizes are required before using MMP-3 in clinical practice. In addition, comparative MMP-3, MMP-9 and TIMP-1 trials are required on diagnosis and post-treatment for evaluating their role on the development and etiopathogenesis of SpAs and IBDs.

This study was funded by Ankara Tıplılar Vakfı.