Rheumatoid arthritis (RA) is a systemic inflammatory disease which causes increased risk of cardiovascular disease (CVD), and is characterized by chronic erosive synovitis of the peripheral joints. Important factors in the increased risk of CVD in RA patients are chronic inflammation, drugs used in treatment of RA, and a sedentary lifestyle. (1) Chronic inflammation is the most important reason for accelerated atherosclerosis development in RA. (2) Cytokines involved in the systemic circulation in RA have altered function in distant organs such as adipose tissue, liver, and skeletal muscle. Thus, they cause a series of atherogenic changes such as insulin resistance, dyslipidemia, oxidative stress, thrombotic effects, endothelial dysfunction, and injury. Even during remission periods of the disease, systemic cytokine levels were found to be higher than those of normal individuals and they caused continued vascular disease. (3)

In various studies, increased carotid intimamedia thickness (CIMT) has been shown to be a good indicator of atherosclerosis. CIMT has been reported to correlate with myocardial infarction, stroke, and peripheral artery disease. (4-7) Not only is increased CIMT indicative of early atherosclerosis, but it also reflects the compensatory enlargement of non-atherosclerotic tissue with thickened medial fibrocellular hypertrophy related to smooth muscle cell hyperplasia and hypertrophy. (4,8) Increased CIMT and the presence of focal plaque in patients with RA not having traditional CVD risk factors may be a harbinger of cardiovascular events. (9,10) In the conducted studies, a strong correlation has been shown between the presence of subclinical atherosclerosis and the duration and severity of inflammation and the level of acute phase reactants. (1)

Metabolic syndrome (MetS) is a disorder characterized by a co-occurrence of three out of five of the following medical conditions: abdominal obesity, elevated blood pressure, high serum triglycerides, low high-density cholesterol levels, and elevated fasting plasma glucose. (11) Some studies showed that increased numbers of MetS risk components lead to worsening cardiovascular disease outcomes and risk factors. (12) Although CIMT is related to metabolic parameters, only a few studies have investigated the relationship between numbers of MetS risk parameters and CIMT. (12) Therefore, in this study, we aimed to investigate the relationship between CIMT and clinical and metabolic variables in RA patients.

This study was carried out at the Canakkale Onsekiz Mart University Medical Faculty Hospital between April 2012 and January 2013. A total of 118 subjects including 76 RA patients (18 males, 58 females; mean age 50.1±9.8 years; range 21 to 69 years) and 42 healthy individuals (11 males, 31 females; mean age 49.2±9.7; range 28 to 66 years) were enrolled. All patients gave informed consent forms and the study was approved by the local ethical committee.

Patients were asked about their age, sex, height, weight, body mass index, waist circumference, systolic and diastolic blood pressure, duration of illness, smoking and alcohol consumption status, presence of accompanying chronic diseases, morning stiffness in the joints and duration, and the drugs they continued to use. Laboratory and clinical parameters such as erythrocyte sedimentation rate (ESR), C-reactive protein (CRP), Health Assessment Questionnaire score, and Disease activity score 28 were used in assessing disease activation. Pain evaluation was done using a visual analog scale with a range from 0 to 100 mm. Rheumatoid factor and anti-cyclic citrullinated peptide were measured. MetS was defined according to the National Education Program/Adult Treatment Panel III criteria and MetS components [glucose higher than 110 mg/dL, high-density cholesterol less than 40 mg/dL (males) or less than 50 mg/dL (females), triglycerides higher than 150 mg/dL, blood pressure higher than 130/80 mmHg or medication for hypertension and waist circumference of 88 cm for females or 102 cm for males] were measured. (11) Exclusion criteria consisted of age ≤18 years, chronic liver/kidney disease, central nervous system disease, malignancy, patients with other inflammatory diseases, and patients who refused to participate in the study.

Echocardiographic measurements with a linear-array imaging probe (GE-vingmed Vivid 7, GE Vingmend Ultrasound AS, Horten, Norway) were employed to evaluate the CIMT of the right common carotid artery. A region 10 mm proximal to the carotid bifurcation was identified, and the CIMT of the far wall was calculated as the distance between the lumen-intima and media-adventitia interfaces. A frozen image distinctly indicating the borders of the intima and media was obtained and magnified to maximize resolution. CIMT was measured on this image at three adjacent sites 1 mm apart, and the mean value of the three measurements was used for analyses. All measurements were performed by the same investigator, who was blinded to all patient data.

Table 1. Comparison of demographic and clinical parameters of groups
× 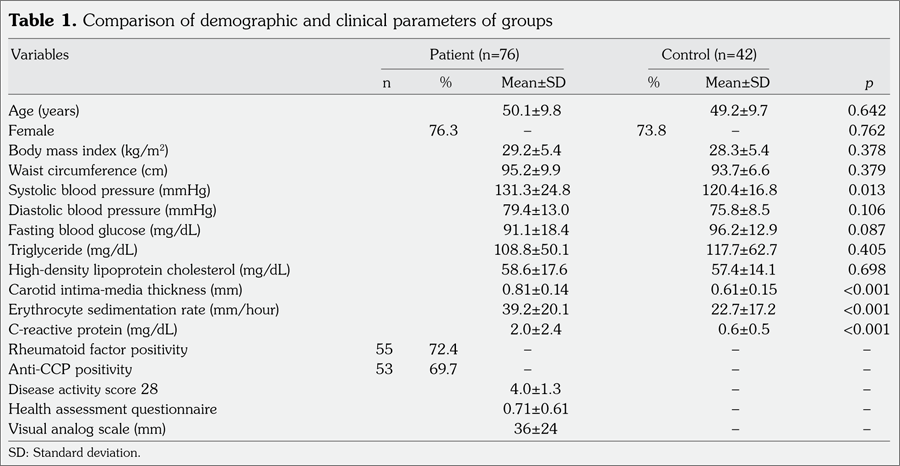 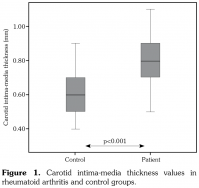 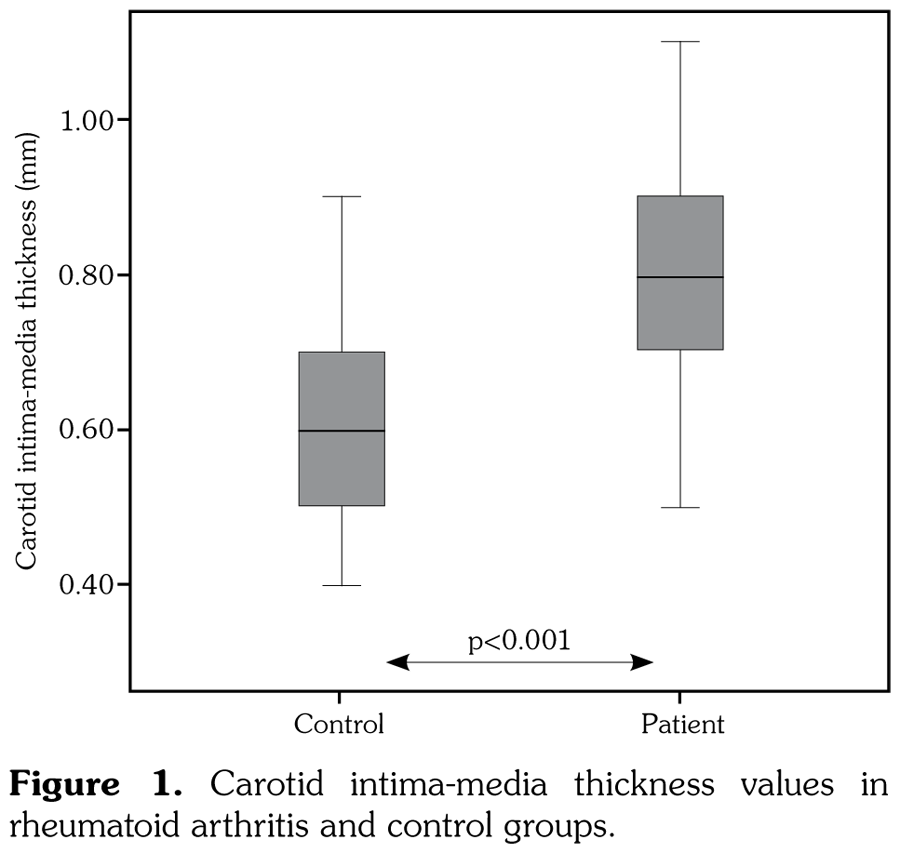 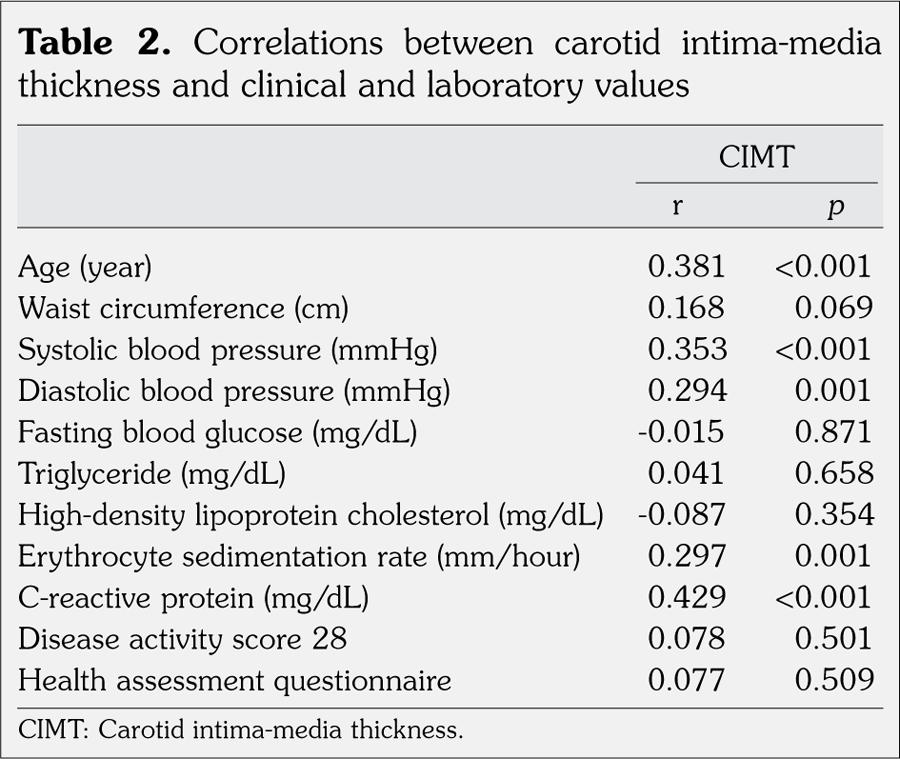 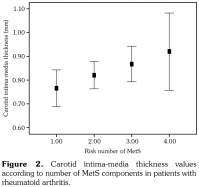 The incidence of CVD in RA patients is independent of traditional cardiovascular risk factors. (13) Cardiovascular mortality has been correlated with greater activity of the disease. The inflammation that occurs in persons with RA has been suggested to accelerate the atherosclerotic process. Measurement of CIMT is a useful noninvasive marker of atherosclerotic disease. Previous studies demonstrated that increased common CIMT is a good indicator of generalized atherosclerosis and coronary artery disease. (14) CIMT has been related to several cardiovascular risk factors, including obesity, hyperlipidemia, and type 2 diabetes mellitus and insulin resistance. Studies have previously reported the presence of subclinical atherosclerosis, confirmed by increased CIMT, in RA patients without a clinical history of cardiovascular events. (15,16) In the study of Del Rincón et al., (17) authors showed increased CIMT in patients with RA and a relationship with disease duration. We have shown that disease duration is not related to CIMT. This result may be explained by the short duration of disease. Previous studies showed not only disease duration to be an important risk factor, but also inflammation severity, CRP level, and number of joints involved as significant factors for elevated CIMT. Therefore, we might not have found a link between CIMT and disease duration due to other factors. However, in our study, CIMT was higher in RA patients than in the control group, demonstrating the presence of subclinical atherosclerosis in RA patients, and corroborating the findings of a majority of the previous work in this field.

The association between carotid atherosclerosis and inflammatory markers such as ESR and CRP has been shown to be independent of cardiovascular risk factors. (18) A strong correlation was identified between the presence of subclinical atherosclerosis and the magnitude and duration of the inflammatory response obtained by evaluating CRP levels in RA patients. (19) In our study, we have detected a weak correlation between CIMT and ESR and CRP as clinical parameters indicating inflammation. This is a significant result regarding the inflammatory response correlating with the atherosclerotic process and cardiovascular mortality.

In conclusion, our study has shown elevated CIMT values in RA. We also demonstrated that CIMT correlated with hypertension from among other metabolic parameters. The results of this study suggest that the number of components of MetS present in patients with RA increases the tendency to atherosclerosis, thus constituting a risk for CVD.