Randomized trials are often used as key evidence for detecting the effectiveness of treatments in knee osteoarthritis (KOA).(1-3) However, for these trials to be clinically useful, trial participants should have similar characteristics with patients shown in clinical practices. To achieve this, trials need to be evaluated in terms of external validity, from which we can detect whether trial findings are generalizable to the population with KOA.

Previously, a possibility of delineating external validity was presented by calculating proportions of patients at each stage of the recruitment process (Figure 1).(8) Because flow diagrams depicting the recruitment process were emphasized in the Consolidated Standards of Reporting Trials (CONSORT) statement,(9) these scales are expected to be clearly calculated from KOA trials. Therefore, in this study, we aimed to investigate the external validity of KOA trials through a systematic review of randomized, placebo-controlled, clinical trials. 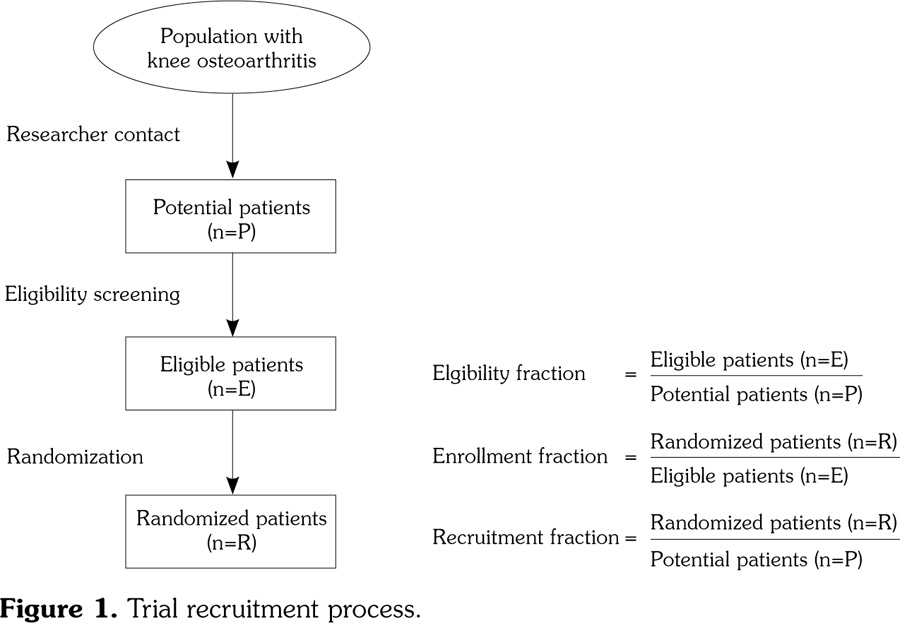 The search strategy used has been described previously.(10,11) In brief, the first search was performed in PubMed, SCOPUS, and the Cochrane Central Register of Controlled Trials up to December 2011 using the terms knee arthritis, KOA, gonarthritis, and gonarthrosis with the limits set to trials. The second search was carried out in Cochrane Reviews using the same terms. Additional trials were sought by referencing the retrieved reviews. Finally, the search was expanded to all studies referenced in the trials which were found. Based on previous raw data set,(5,10-13) the first author selected randomized, placebo-controlled trials written in English.

Since NNS was considered as an essential scale in original study,(8) we investigated if the NNSs were affected by trial characteristics such as center type, publication year, treatment type, delivery route, and flare design. Group differences were identified using an analysis of variance. We also examined the NNS categorized by individual treatments. Because the tested treatments were diverse, we explained group differences in a descriptive manner using a median value as a reference point. When necessary, we contacted authors of included trials. Statistical significance was defined as p<0.05. STATA version 11.0 (StataCorp. LP, College Station, Texas, USA) was used for all analyses.

We identified 36,691 citations (PubMed, 1,646; SCOPUS, 32,246; Cochrane Registered Trials, 2,484; and extra source, 315), of which 354 reports were identified as potentially eligible for our analyses (Figure 2). Of these, a total of nine reports were excluded since some included other diseases (n=3), some were duplicates (n=3), some reported data combined over the hip and knee joints (n=2), or included randomized patients of both genders but reported only female patients (n=1). The total number of reports analyzed was 345, which presented 352 trials. 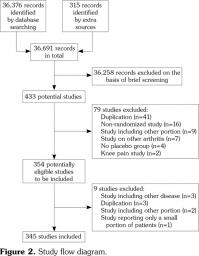 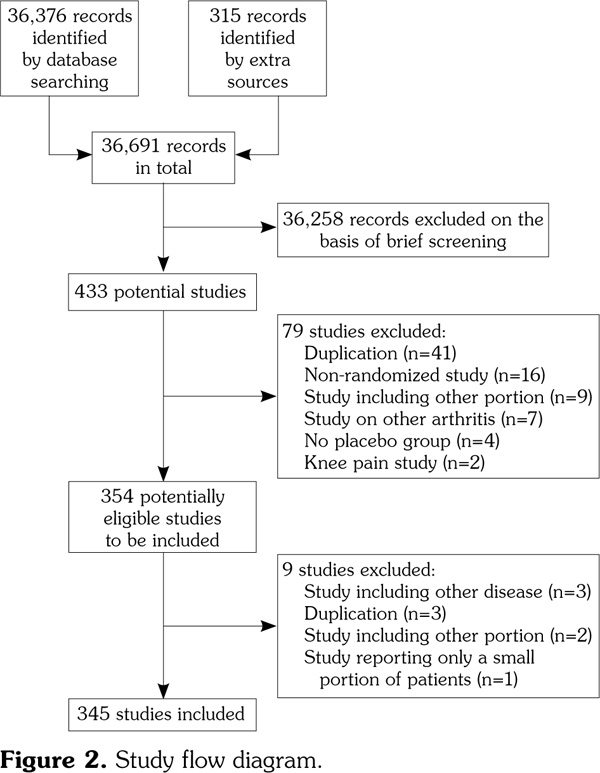 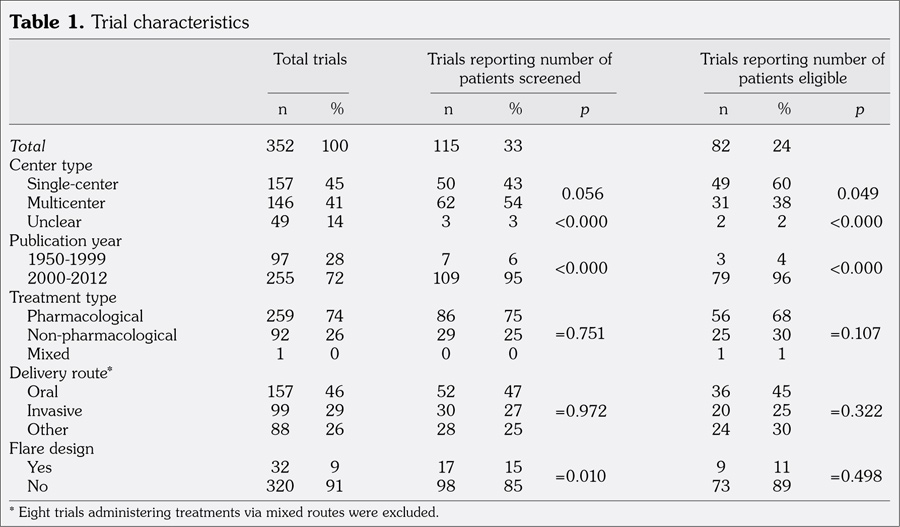 Table 2 presents data on the eligibility, enrollment, and recruitment fractions. With respect to the eligibility fraction, only 75 (21%) trials provided sufficient data for calculation. In these trials, the median proportion of potential patients who were eligible for trials was 71.9% (interquartile range: 52.7 to 86.5%). Regarding the enrollment fraction, 82 (23%) trials presented sufficient information. A median of 92.9% of eligible patients was randomized in these trials (interquartile range: 82.5 to 100%). Of these, 21 trials reported that 100% of eligible patients were randomized in a trial. In the remaining trials, reasons for why eligible patients were not randomized were reported as “refusing to participate” (38%), which was the most common, followed by “no interest” (17%), and “other” (16%). The overall recruitment fraction varied greatly across trials. In the 116 (33%) trials that reported adequate data for analysis, the median recruitment fraction was 67.9% (interquartile range: 48.9 to 82.9%). The median NNS was 1.5 (range: 1 to 10). To summarize, some trials randomized every potential patient screened for eligibility, whereas others screened as many as 10 potential patients for each patient finally randomized.

Table 3 shows the relationships between NNS and trial characteristics. While no significance was detected in the publication year, treatment type, delivery route, and flare design, significance was detected for the center type (p=0.009). For example, pharmacological and non-pharmacological trials did not screen patients differently for randomization. In a post hoc analysis for center type, single center trials screened significantly more patients to randomize one patient than multicenter trials (p=0.003).

Table 3. Relationship between number of patients needed to screen to randomize one patient and trial characteristics
× 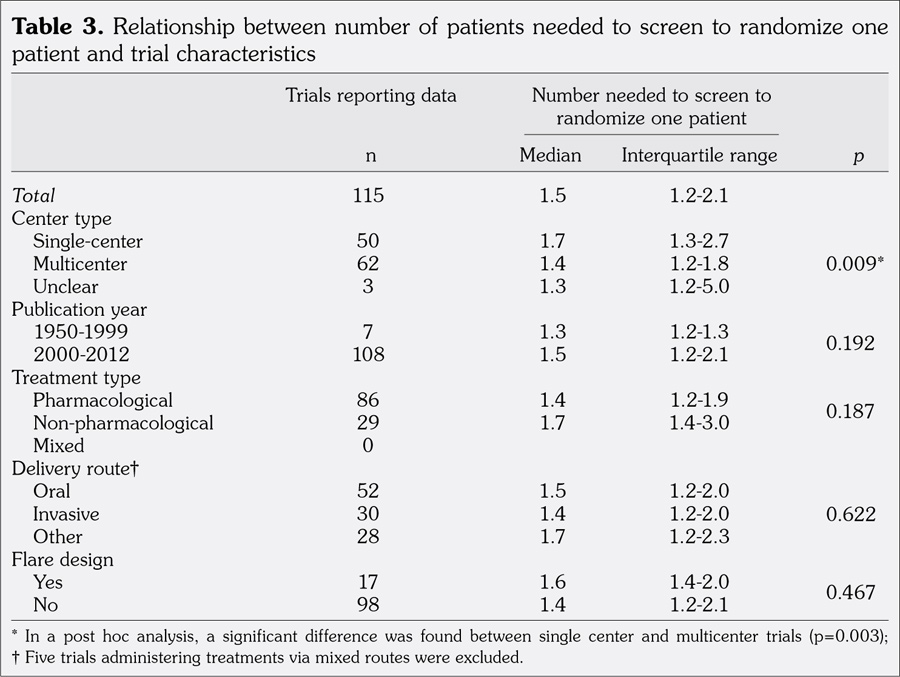 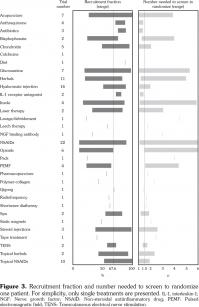 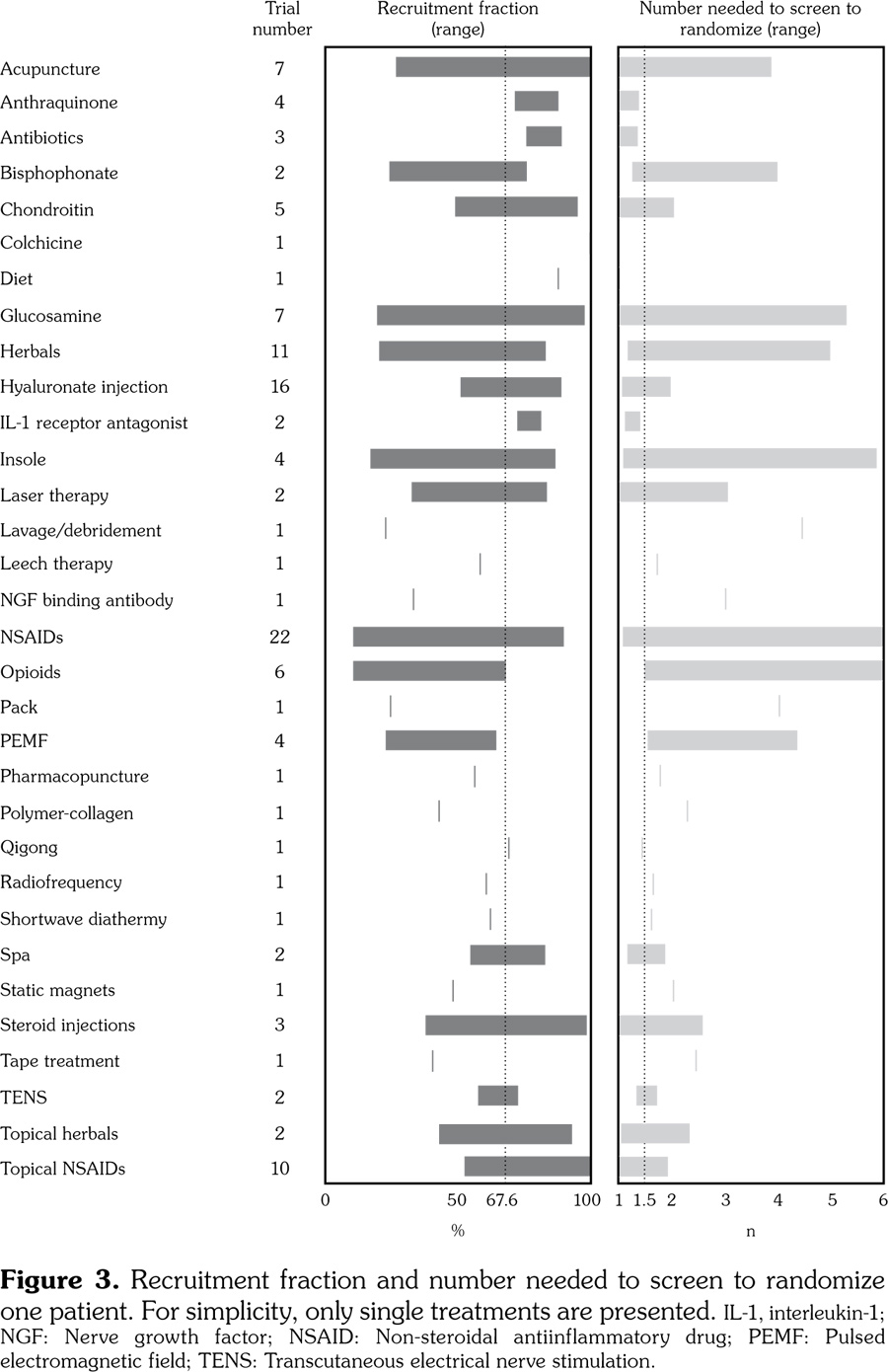 A number of previous studies have argued that the recruitment process necessary for calculating three fractions was poorly described in many randomized trials.(8,14-18) While some stages were well reported, others were depicted incompletely. In cases of trials published in major journals, 85-90% reported the enrollment fraction, whereas only 40-60% reported the eligibility fraction.(8,14)

Nevertheless, these values were definitely higher than our finding of 21-33%.

Considering the CONSORT statement, this poor reporting of the recruitment process in the KOA trials is surprising. Ever since the CONSORT statement was first published, it has strongly recommended that the possibility of whether trial findings are applicable in clinical practices should be discussed in trial reporting.(19-21) To better provide information on external validity, the CONSORT statement also emphasized depicting all stages of flow diagrams including enrollment in 2001.(20) However, such effort appears to be unsuccessful in the KOA area since a majority of KOA trials omitted data necessary for calculating the fractions.

The omission may be associated with the fact that the recruitment process regarding external validity was not actually considered in the CONSORT statement. In fact, the CONSORT guidelines encouraged clinicians to focus on characteristics of trial participants or results of previous works.(22) For example, one behavioral program was considered as a reliable treatment in different settings because a subsequent largescale trial(23) successfully replicated a previous work.(24) For this reason, it was argued that the CONSORT statement lacked the reporting of external validity.(25) Alternative frameworks were proposed, such as qualitative studies or quality assessment checklists.(25,26)

In the meantime, one method that aims to gauge external validity quantitatively was proposed.(8) Specifically, an outcome of NNS was magnified. Since it has been shown that trial participants are different from eligible non-participants,(27,28) trials showing lower NNSs may be more generalizable. According to many studies, the median NNSs were 1.8 in trials of major journals,(8) 2-5.6 in cancer trials,(16,18) and 2.4 in primary care trials.(17) Clearly, these results were greater than our finding of 1.5, indicating that these trials screened more patients than KOA trials to randomize one patient.

Meanwhile, a previous study showed that the median NNS was 1.3 in rheumatoid arthritis trials,(15) which is consistent with our finding. This study suggested that rheumatoid arthritis trials were excellently generalizable since three patients were screened for every two enrolled in the trials.(15) Because KOA trials also screened three patients for every two enrolled, it can be argued in general that KOA trials were of good quality for external validity.

It may also be argued that not all KOA trials were generalizable, since 34% of treatments demonstrated their efficacy on highly selected patients compared with the median trial. However, it should be noted that NNS reflects whole clinical situations in a trial (e.g. center, care provider, eligibility criteria, etc.). Even trials showing high NNSs may be conducted so well that the trial results can be applied to a broader spectrum of patients. In this respect, the NNS should be considered as an indicator that determines the degree of challenge in enrolling patients who are screened. Therefore, clinicians who use such treatments should consider recruitment data in relation to whole information shown in the trials.

We also found that NNS was affected by the center type. Researchers in a single center may be better informed about the aim of trials, thus apply strict eligibility criteria to patients and may need more patients for screening. Consequently, this may result in more pronounced effects of test treatments since highly selected patients may show better outcomes. In fact, single-center trials showed superior treatment effects than multicenter trials.(29-31) Therefore, further studies are required to demonstrate whether treatments on KOA show superior efficacy in single-center trials.

In conclusion, only 21-33% of 352 KOA trials provided sufficient data on the recruitment process necessary for calculating three fractions. This low reporting rate was contrary to the CONSORT statement recommending detailed reporting of the recruitment process. On closer analysis using available recruitment data, KOA trials were, in general, excellently generalizable. However, 34% of treatments were tested on highly selected patients compared with the median trial. Therefore, clinicians who wish to use such treatments should consider all clinical information and further trials should document the recruitment data in detail to help clinicians determine the applicability of trial findings in clinical practice.