Familial Mediterranean fever (FMF) is an autosomal recessive disease of unknown etiology which is characterized by recurrent episodes of febrile serositis. In addition to arthritis, spondyloarthropathy (SpA) may also accompany the disease.(1) Various rates of incidences for sacroiliitis and spondylitis have been reported.(2,3) Behçet’s disease (BD) is an inflammatory disease characterized with recurrent oral and genital aphthous ulcerations, uveitis, and skin lesions. In BD, joint involvement, particularly of the large joints of the lower extremity, is common.(4) Herein we present a case of FMF, BD and sacroiliitis coexistence which is a rare condition in the literature.

A 43-year-old female patient applied to our clinic with complaints of low back pain, morning stiffness and swelling in ankles. The patient had been followed-up in a university hospital with the diagnoses of FMF and SpA for eight years. She was on treatment of sulfasalazine 2 g/day, colchicine 4x0.5 g and acemetacin 120 mg/day. Patient’s rheumatologic questioning revealed oral aphthae, inflammatory low back pain, morning stiffness, episodic arthritis in lower extremities, febrile attacks, genital ulcerations healing with scarring, and erythema nodosum. When her anamnesis was deepened, her abdominal attacks accompanied by fever were discovered. She stated that her complaints and frequency of attacks had diminished after colchicine treatment. Therefore, she was diagnosed as FMF according to Tel- Hashomer diagnostic criteria for FMF.(5) Patient’s systemic physical examination was normal. In locomotor examination, sacroiliac compression tests were bilaterally positive. Modified Schober was 6.5 cm, hand finger-floor distance was 5 cm, occiput to wall distance was 7 cm, tragus to wall distance was 19 cm, and chest expansion was 5 cm. Also, her ankles were bilaterally warm, swollen and tender with normal range of motion. She had enthesitis in her right Achilles tendon and fifth lumbar spinous process. In her family history, her daughter also had FMF. Her laboratory analysis results were as follows; erythrocyte sedimentation rate: 23 mm/h, C-reactive protein: 1 mg/dL, hemoglobin: 9.2, human leukocyte antigen (HLA)-B27: negative, HLA-B51: positive. Pelvis graphy showed bilateral grade III sacroiliitis (Figure 1). The pathergy test was negative. Her coronary computed tomography angiography and ECHO results, which were performed due to her dyspnea, were normal. Her endoscopic gastrointestinal system evaluation revealed erosion in fundus, cardia and duodenum. The patient fulfilled the Assessment in Spondyloarthritis International Society classification criteria with definite radiographic sacroiliitis according to modified New York criteria and inflammatory low back pain, enthesitis, arthritis in lower extremities, and good response to nonsteroidal anti-inflammatory drugs. The patient was also diagnosed with BD on having oral aphthae, genital ulcerations and erythema nodosum according to criteria of international study group for BD.(6) 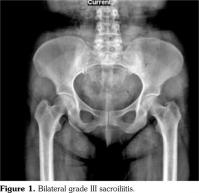 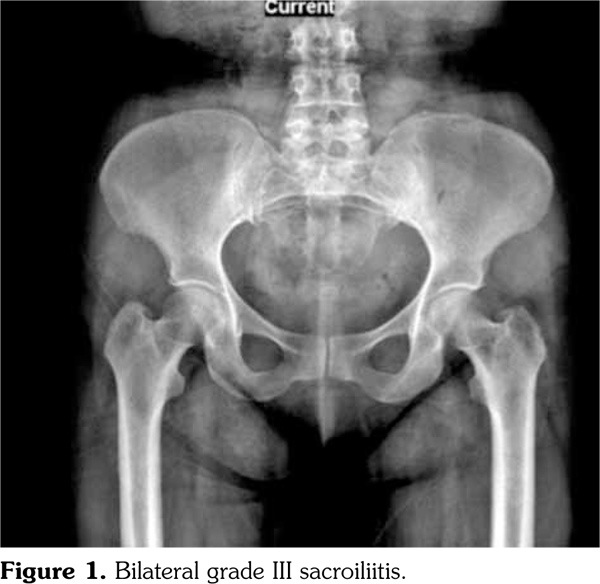 Familial Mediterranean fever is a multisystemic autosomal recessive disease, occasionally accompanied by sacroiliitis.(2) SpA is an infrequent form of joint involvement in FMF and few cases of FMF with seronegative SpA have been reported.(2) The coexistence of FMF and sacroiliitis was investigated in a study by Kaşifoğlu et al.(7) and it was reported to exist by 7% frequency among FMF patients.

For many years, there have been ongoing discussions on association of FMF and SpA. In the literature, many cases of FMF and sacroiliitis are known to be negative for HLA-B27. Some investigators argue that the development of SpA clinical profile in FMF patients can be differentiated from classical ankylosing spondylitis clinical profile due to the absence of lumbar spinal involvement signs and negativity of HLA-B27, as in our patient. On the other hand, cases positive for HLA-B27 are generally recognized as a coincidental association of SpA and FMF.(8,9)

Behçet’s disease has been classified as SpA by some rheumatologists due to erosive sacroiliitis and inflammatory spinal pain. Although a high incidence of sacroiliitis has been reported in BD patients, the absence of a familial relationship with other SpAs in seronegative SpA group and higher association with HLA-B51 than with HLAB27 suggest that BD should not be classified in seronegative SpAs.(10) This situation corresponds to findings of our patient.

In spite of the distinct clinical features of BD and FMF, they have several common characteristics. Both of them are chronic relapsing inflammatory diseases caused by abnormal neutrophil activation.(11,12) The gene responsible for FMF, MEFV, is located on chromosome 16p13. Its product, pyrin is expressed in neutrophils, dendritic cells, monocytes, and synovial fibroblasts. Pyrin enhances ASC-independent nuclear factor-kB activation through interactions with p65 NF-kB and IkB-a leading to increased inflammatory response.(5) Neutrophils also play an important role in the development of BD.(12,13) They are found abundantly in lesions of BD patients without bacterial infections. Activated neutrophils secrete some cytokines which stimulate themselves and T helper 1 cells.(12) Therefore, the abnormal neutrophils may be therapeutic targets for BD and FMF. Colchicine is used as the first line therapy for both diseases since it suppresses neutrophil motility and chemotaxis by inhibiting microtubule functions.(14) Therefore, it may be suggested that BD and FMF may have some common pathogenetic pathways.

The association between FMF and vasculitic processes does not merely show a coincidentally increased frequency; rather, it seems that FMF patients might have higher risk of developing vasculitis.(15) In a study by Schwarts et al.(16) on 4,000 FMF patients, it was reported that 39 patients had BD as well as FMF. In a study by Ben-Chetrit et al.,(17) 16 patients with BD had MEFV mutations, two of whom were symptomatic homozygotes and had concomitant FMF. It was concluded that BD and FMF were two separate entities that had a mild trend toward a higher than expected association. Yazıcı et al.(18) investigated the frequency of MEFV gene mutation positivity among patients with BD and detected that 27% had mutations. However, they were unable to show any relationship with the clinical manifestations. In a study by Rabinovich et al.,(19) 21 BD patients were shown to carry a single MEFV mutation and three additional patients were compound heterozygotes, which was compatible with a frequency significantly higher than that expected for ethnically matched healthy individuals. Considering BD as a vasculitic disease, these data support the shared pathogenetic mechanisms and the probability of two diseases to coexist. However, in a study by Espinosa et al.(20) on cohort of Spanish patients, FMF was not demonstrated to be genetically associated with BD.

Similar to our case, a 35-year-old Tunisian male who had an association of BD, FMF and sacroiliitis was reported in the literature. However, he was positive for HLA-B27 and diagnosed with concomitant ankylosing spondylitis.(21) Also, Mobini(22) described a 27-year-old patient with BD who suffered from attacks of fever, arthralgia, abdominal pain; and genetic study confirmed the diagnosis of FMF. Birlik et al.(23) from our country reported a case of longstanding FMF with sacroiliitis who later developed typical characteristics of BD.

Even though our patient fulfilled the diagnostic criteria of FMF, BD and SpA, the articular involvement types of FMF and BD -usually lower extremity mono-oligoarthritis- and their effect on development of sacroiliitis which was discussed above suggested that our patient may not have an isolated SpA. Particularly, the facts that our patient was negative for HLA-B27 and did not have family history of SpA support this proposal. On the other hand, existence of enthesitis which is almost pathognomonic for SpA indicates that SpA may coexist independently with FMF and BD in our patient.