Relationship Between Physical Disability, Disease Activity and Osteoporosis in Patients With Rheumatoid Arthritis

Rheumatoid arthritis (RA) is a disease characterized by a systemic chronic inflammation which mainly affects the joints through cytokines, chemokines and metalloproteinases. Osteoporosis (OP) is considered to be an extra-articular manifestation of RA,(1) with the prevalence of OP being higher in RA patients than in the general population.(2)

Potential etiological factors include glucocorticoid treatment, decreased physical activity with progressive disease, and a direct effect of inflammatory mediators on bone turnover. Current controversies include how these factors could influence the RA patients. The influence of these factors is likely to be more clearly defined nearly in the disease process, when bone mass is highest and change is more easily quantified since there is less influence of previous treatment or the manifestation of the menopause period.(3)

This study aims to assess the relationship between physical disability, disease activity, and bone mineral density (BMD) in postmenopausal patients with RA.

The study included 130 women (mean age 62.77±7.51 years; range 57 to 69 years) followed by the Rheumatology Clinic in the Clinical Emergency Hospital of Constanta and Clinical Railway Hospital Constanta between January 2008 and January 2010. The women reached menopause at ages between 49 and 75 years. Inclusion criteria were as follows: postmenopausal women meeting American College of Rheumatology 1987 revised criteria for RA, with disease duration of more than two years.(4) Exclusion criteria were as follows: having secondary OP related with an etiology other than RA, and taking corticosteroid treatment for diseases such as hyperparathyroidism, thyroid disease, and diabetes mellitus, having no BMD measurement.

Global assessment of disease activity was performed by measurement on a visual analog scale from 0 to 100 mm. Disease activity score 28 was calculated by assessing the 28 tender joint count and 28 swollen joint count,(5) and ESR was calculated by the Westergren method.(6) Physical disability was assessed by the mHAQ.(7) C-reactive protein was estimated by the NycoCard Reader.(8) Bone mineral density was measured at the lumbar spine (L2-L4) and femur and femoral neck by dual energy X-ray absorptiometry using an Alpha DPX-type (GE Lunar Corp., Madison, WI). Bone mass was assessed by means of BMD (g/cm2), using the T-score and Z-score. Osteoporosis was defined on the basis of dual energy X-ray absorptiometry, according to the World Health Organization, when the T-score was at least 2.5 standard deviations (SD) below the average young adult value, a value of ±1 SD was defined as normal, and between -1.0 and -2.5 SD was defined as osteopenia.(9)

Vertebral fractures (T4-L5) were diagnosed with X-rays of the dorsolumbar spine, and fracture evaluations were made by an experienced radiologist using Genant’s semi-quantitative method.(10)

Fractures other than spinal fractures such as femur, humerus, or forearm fractures were diagnosed through questioning the subjects. Fractures which occurred as a result of minor trauma such as falling from standing height were considered to be osteoporotic fractures.

Bivariate analysis was used to compare demographic variables as well as variables related to RA in patients with and without treatment with corticosteroids. Student’s t-test was used for comparing variables with continuous normal distribution, the Mann-Whitney U test was used for comparing variables with continuous nonnormal distribution, and the Chi-square test was used for dichotomous variables. We performed a multivariate analysis for the variables which are significantly associated with OP. We used other models of logistic regression where OP represented the dependent variable, and the independent variables were those which were statistically associated with OP in the bivariate analysis. The variables were included in the regression equation through the stepwise method. P was considered statistically significant at a value of less than 0.05. Statistical analysis was performed using a computer program (MedCalc for Windows, v10, Mariakerke, Belgium). 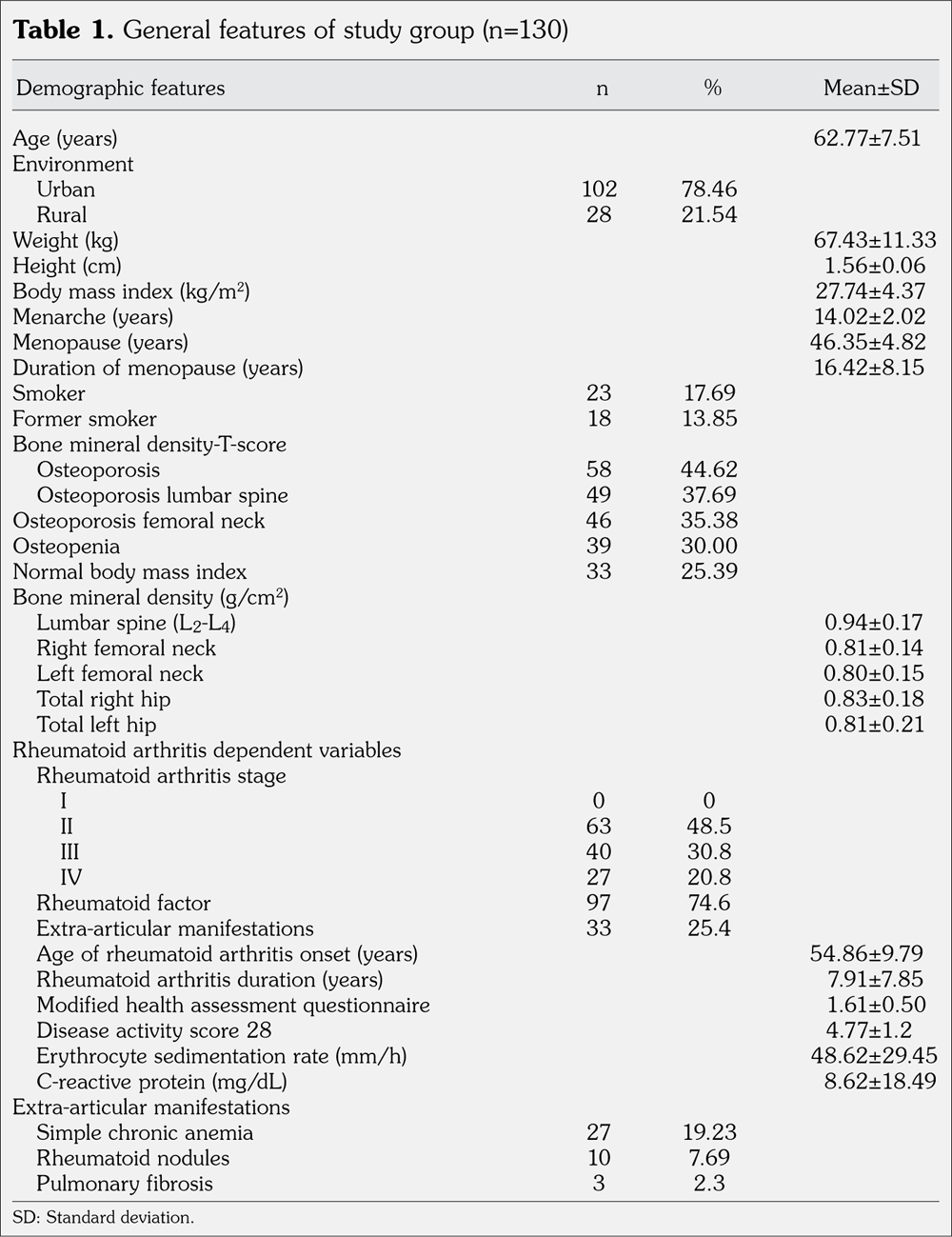 Extra-articular manifestations were present in 25.4% of the patients, among which 27 patients (19.23%) presented chronic anemia, 10 patients (7.69%) presented rheumatoid nodules, and three patients (2.3%) had pulmonary fibrosis (Table 1).

Fifty-eight percent of the patients used 7.5-10 mg/day prednisone equivalent of corticosteroids. Patients on corticosteroid treatment received corticosteroids for more than one year. Regarding other treatments, the majority of the patients received leflunomide (49%), followed by those who received methotrexate (44%), combinations of disease modifying antirheumatic drugs (21%), and hydroxychloroquine (16%), sulfasalazine (14%), and biological therapy (9%). No patient received anti-osteoporotic medication.

Table 2. Comparison between patients with and without osteoporosis
× 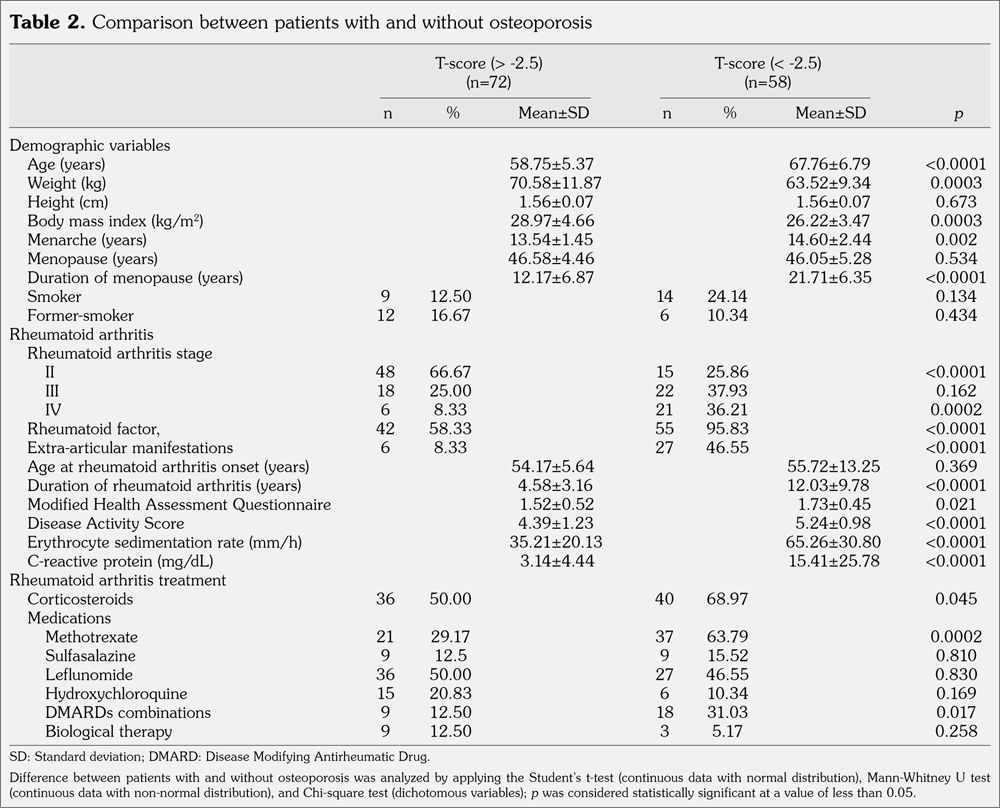 Logistic regression was used to measure the independent contribution of each factor to OP, including any factor that has been identified in the bivariate analysis and was statistically associated with OP. We explored several logistic regression models as presented in Tables 3 and 4. We showed that the mHAQ score and DAS28 do not independently contribute to the occurrence of OP (Table 5).

Old age and lower BMI seem to be among the independent risk factors for OP. Late menarche and longer duration of menopause are significantly associated with OP, a finding which is in accordance with other studies. Thus we showed that years since menopause may be more important than chronological age in postmenopausal OP.(14)

We further demonstrated that the environment may represent an independent risk factor for OP. Even after adjusting for disability (mHAQ), the risk of OP in people from urban areas is 3.5 times higher compared with rural areas.(15) A reason for this may be that unlike patients in urban areas, patients in rural areas take more physical exercise. It is known that physical exercise represents a stimulus of the musculoskeletal system, and an important factor in achieving and maintaining the body's bone capital.

Extra-articular manifestations are statistically associated with OP, but also with higher values of mHAQ, DAS28, ESR, and CRP.

Extra-articular manifestations were statistically associated with OP and higher values of mHAQ, DAS28, ESR, and CRP. Therefore, the presence of RF was statistically associated with OP, but also with higher duration of PR, and higher values of mHAQ, ESR and CRP. To the best of our knowledge, other studies are in contradiction concerning indicating RF as a risk factor for OP.(12,13) Moreover, only few studies have evaluated the relationship between extra-articular manifestations and OP. These variables were included in the regression logistic model, which showed that the duration of RA, mHAQ score, DAS28, ESR and CRP may be independent risk factors for OP.

In the bivariate analysis, mHAQ score and DAS28 were statistically associated with OP, and DAS28 and mHAQ score were not independent risk factors for OP as far as the relationship between mHAQ score and OP could be covered by DAS28.

The study has several limitations. First, it is a non-randomized study, and there are confounding factors. Confounding is a form of bias that can distort the measure of association between an exposure and disease, and must be eliminated. Logistic regression may be an efficient way to control the presence of any potential confounders at once, but the interpretation of the results may be limited due to the possible presence of other variables which may have been omitted. For example, age and the duration of menopause may be confounders, hence older age as well as longer duration of menopause were associated with OP. Furthermore, older women had longer durations of menopause. In the present study, age and the duration of menopause were identified as independent risk factors for OP by using logistic regression. It is difficult to know whether the RA dependent variables, identified as risk factors for OP in the logistic regression, can be confounders (e.g. ESR and CPR can be confounders for DAS28).

Although OP may be common in patients with RA, it is difficult to estimate which particular targets and therapeutics may be the best approach in the future. The demographic variables measured in our study were shown to be involved in the occurrence of OP. Furthermore, the severity of RA was demonstrated to be a possible contributor in the occurrence of OP, without being an independent factor of physical disability. Therefore, we may conclude that OP may occur more frequently in patients with more severe forms of RA, and the duration of the disease tends to be longer in such cases.