Objectives: This study aims to investigate the possible relationship between Mediterranean fever (MEFV) gene mutations and messenger ribonucleic acid (mRNA) expressions and to identify the link between phenotype and genotype of pediatric patients with Familial Mediterranean fever (FMF).

Results: The most common clinical findings were abdominal pain, fever and vomiting. The mutation detection rate in the patient group was OR=4.1 (95% CI: 1.8-9.0) times higher than that of the control group. The MEFV mRNA expression level of the patients with MEFV gene mutations was lower compared to the control group, indicating statistical significance.

Familial Mediterranean fever (FMF, OMIM ≠249100) is an autosomal recessive inherited autoinflammatory disease that commonly affects people of East Mediterranean ethnic origin; primarily those of Turkish, Greek, Druze, Arab, Armenian and non-Ashkenazi Sephardi (Sephardic) Jewish descent.[1-6] Familial Mediterranean fever has also been reported with incomplete penetrance in other Mediterranean countries, such as Cyprus, Italy, Spain and Greece.[7] The disease is characterized by recurrent and self-limiting episodes of fever, serosal inflammation of the membranes (the synovial membrane, the peritoneum and pleura), abdominal pain attacks, arthritis, skin rashes and serum amyloid A protein deposition in kidneys unless treatment is provided.[1-6] The prevalence and the carrier rate of FMF in Turkey have been reported as 1/1,000 and 20%, respectively.[8,9]

Mutations in the Mediterranean fever (MEFV) gene, which is mapped to chromosome 16p13.31-5, play an important role in the pathogenesis of FMF.[1-5] The MEFV gene codes for a 781 amino acid (aa) marenostrin/pyrin protein, which is expressed in neutrophils, eosinophils, cytokine activated monocytes, dendritic cells, synovial, peritoneal and skinoriginated fibroblasts.[1-3,5] Marenostrin/pyrin proteins have been reported to play regulatory roles in interleukin-1 beta (IL-1b) maturation, caspase-1 activation (which is responsible for NF-kB activation), apoptotic mechanisms and the regulation of innate immunity leading to both proinflammatory and anti-inflammatory effects.[2,3,5] Using the green fluorescent protein fusion assay method, it was shown that the full-length (781 aa) marenostrin/pyrin protein is located in cytoplasmic perinuclear region and is associated with microtubules and actin filaments via a B30.2 domain.[1,2] A shorter form of marenostrin/ pyrin is located inside the nucleus. This 570 aa form is translated from the second exon via alternative splicing and lacks the MEFV-d2 transcripts. It has been reported that the MEFV gene is regulated by nonsense-mediated decay, and different isoforms of the MEFV transcript are located at different cellular regions, with different roles in the inflammation process.[2]

To date, 227 FMF-associated polymorphisms/ mutations (221 substitutions, 2 insertions, 2 deletions and 2 duplications) of the marenostrin/ pyrin coding MEFV gene have been reported. These MEFV polymorphisms/mutations are located in the following regions of the coding gene: exon 10 (70) > exon 2 (64) > exon 5 (22) > exon 3 (21) > exon 1 (5).[10] According to the results of studies investigating the relationship between MEFV mutations and messenger RNA (mRNA) expression, increasing numbers of MEFV gene mutations are correlated with decreased mRNA expression level. The mRNA expression levels of peripheral blood leukocyte (PBLs) samples from FMF patients have been reported to be lower than those of healthy controls.[2,3]

Between January 2010 and June 2012, 71 pediatric FMF patients (average age 10.68±4.4 years) were identified from the Trakya University Faculty of Medicine, Department of Pediatric Nephrology with FMF symptoms and diagnosed as FMF according to the Tel-Hashomer criteria. The healthy control group contained 73 pediatric patients (average age 9.12±4.9 years) who did not have abdominal pain, fever attacks and any kidney disease. The patients and controls were not related. Local Ethics Committee approval was given by the Trakya University Faculty of Medicine Clinical Research Ethics Committee of Non-Interventional Study Protocol on 07.08.2008 with a 16/20 decision, following inspection of the study protocol and the informed consent form. The informed consent form includes information about the study, and this form was read and signed by the parents of all pediatric patients and all pediatric control subjects.

For each sample, the RNA concentration was measured with a Nanodrop 2000c Spectrophotometer (Thermo Scientific, Wilmington, USA) and diluted to 1000 ng/μl to get more significant quantitative results. To prevent gDNA contamination, isolated RNA samples were treated with a gDNA wipeout solution, and complementary DNA was synthesized immediately using a QuantiTect Reverse Transcription cDNA kit, according to the manufacturer's handbook instructions (Qiagen, Hilden, Germany). The cDNA concentration was also diluted to 1000 ng/μl.

Quantitative expression analysis was performed with a quantitative polymerase chain reaction (Q-PCR) method using the Corbett RG-6000 real-time (quantitative) PCR machine (Qiagen, Hilden, Germany). The Q-PCR method was applied using a QuantiFast SYBR Green PCR Kit (Qiagen, Hilden, Germany). b2 microglobulin (B2M) was selected as the control gene, and thus, two reaction tubes were studied for each patient; one reaction was for the MEFV gene, and the other one was for B2M. Each reaction tube contained 12.5 μl of SYBR Green, 2.5 μl of forward primer for either the B2M or MEFV gene, 2.5 μl of reverse primer for either the B2M or MEFV gene and 5 μl of cDNA, which was diluted to 1000 ng/μl. The following primers were designed for the B2M gene: forward primer: 5'-TGC-CGT-GTG-AAC-CATGTG- AC-3'; and reverse primer: 5'-ACC-TCCATG- ATG-CTG-CTT-ACA-3'. The following primers were designed for exons 2 and 3 of the MEFV gene: forward primer: 5'-GGAAAA- GAC-AGC-TGC-GAA-TC-3'; and reverse primer: 5'-TCA-ACT-GGG-TCT-CCT-TCC-TG-3'. For each sample, both MEFV gene expression analysis and B2M gene expression analysis were studied twice.

The relative expression level was calculated using the ΔCT method (ΔCT=CT of B2M-CT of MEV, and the 2-ΔCT value corresponds to the fold change between target gene, MEFV, and the reference gene, B2M).

Statistical analysis
In this study, the suitability of the quantitative values for a normal distribution was analyzed with a single sampling Kolmogorov-Smirnov test. Normally distributed age values were analyzed with the Student's t-test, while non-normally distributed expression level values were analyzed using a Mann-Whitney U-test. A Chi-square test was used to analyze the categorical data of patients and controls, odds ratios and 95% confidence intervals (CI) were then calculated. P<0.05 was accepted as a significant statistical value. Statistical analysis was performed using the IBM SPSS Statistics 20.0 software program (IBM Corporation, Armonk, NY, USA).

Table 1. The distribution of Mediterranean fever gene mutations detected in patients and controls
× 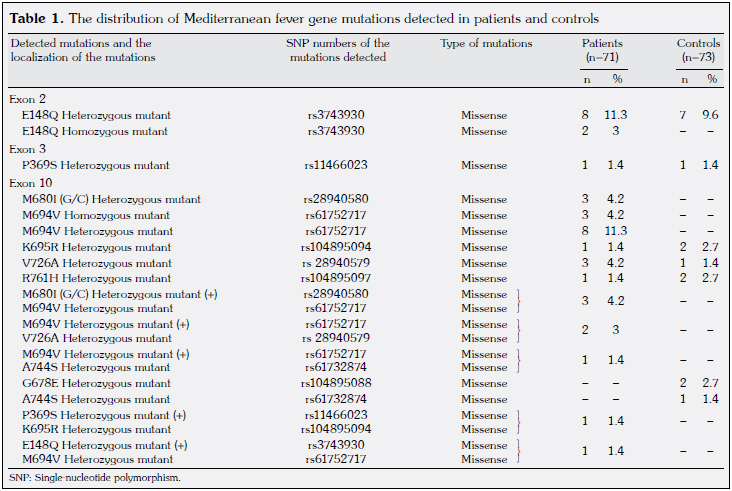 We compared the MEFV mRNA expression levels between controls heterozygous for MEFV mutations (16 controls, all carriers) and controls without detected mutations (n=57), and found no statistically significant difference (p=0.554).

Seventy-one patients diagnosed as having FMF according to the Tel-Hashomer criteria were evaluated, considering 12 clinical symptoms. The prevalence of symptoms, from the highest to the lowest, were abdominal pain (77.5%), fever (50.7%), vomiting (18.3%), nausea (12.7%), arthritis (11.3%), arthralgia (9.9%), erythema (7%) and proteinuria (2.8%). Chronic arthritis, splenomegaly, hepatomegaly and amyloidosis symptoms were not detected in the patients (Table 2).

The relationship between some of the MEFV gene mutations found in patients and 12 clinical findings were investigated. However, only frequency calculation could be made since the number of the patient group was low (Table 4).

We investigated the distribution of MEFV gene mutations and mRNA expression levels in patients previously diagnosed with FMF and healthy controls living in Turkey's Trakya Area.

According to previous studies investigating the frequency of MEFV gene mutations in different geographic regions of Turkey (specifically, the Aegean, Central Anatolia, Black Sea, and South Eastern Anatolia regions), the most frequent mutation is the M694V mutation.[11-16] In our study group, the most frequent MEFV mutation was also M694V, and based on this result, we suggested that the distribution of MEFV gene mutations does not differ greatly between the different geographic areas of Turkey.

In the present study, abdominal pain and fever were the most frequent symptoms. Since fever was more frequent in patients with no MEFV mutation than in patients carrying the MEFV mutation (p=0.012), it can be concluded that diagnosing FMF only with fever-episodes could be deceptive. Amyloidosis and proteinuria were not detected in three patients who had M694V/ M694V genotype; this may have resulted from early diagnosis and colchicine treatment.

Phenotype and genotype associations were evaluated and no statistically significant relation was found. We suggest that the small number of patients (n=71) and tender age (10.7±4.4) (this may cause the patients to express symptoms of the disease incorrectly and have mix symptoms), and also early diagnosis and colchicine treatment may prevent amyloidosis.

Kireçtepe et al.[2] (pediatric patients) and Üstek et al.[3] compared the MEFV mRNA expression levels between FMF patients with MEFV mutations and those without mutations, and they could not detect any significant relationship. However, we found that there was a borderline statistically significant difference between FMF patients with and those without MEFV mutations. This result partly supports the hypothesis of Notarnicola et al.[1] “Inside the possible mechanisms explaining the differences observed between the study groups, MEFV mRNA stability ranging with the presence of MEFV gene mutations”.