The Association Between Bifid Median Nerve and Carpal Tunnel Syndrome: Is it Really a Risk Factor?

Objectives: This study aims to determine the bifid median nerve (BMN) frequency in patients with carpal tunnel syndrome (CTS) and to investigate the possible association between CTS and BMN in this patient population.

Patients and methods: A total of 194 wrists of 131 patients in whom CTS was diagnosed clinically and electrophysiologically and 73 healthy volunteers without any symptom or sign of CTS were examined with ultrasonography.

Results: Bifid median nerve was detected in 22 wrists (11.3%) in CTS group and 15 wrists (10.2%) in the control group. There was no statistically significantly difference in the incidence of BMN among patients with CTS and healthy volunteers (p=0.891).

Conclusion: Our study results showed that the incidence of BMN was similar among CTS patients and healthy volunteers. Therefore, we conclude that BMN may not be a predisposing factor for CTS.

Carpal tunnel syndrome (CTS) is the most common entrapment neuropathy and is thought to be associated with bifid median nerve (BMN).[1-4] The diagnosis of CTS is usually based on clinical history, physical examination findings as confirmed by nerve conduction studies (NCS).[5,6] In the last decade, sonographic evaluation via high resolution linear transducers has emerged as a new diagnostic technique for diagnosing CTS and various musculoskeletal conditions.[7-10] A BMN refers to high division of the median nerve proximal to the carpal tunnel.[1] In previous studies, BMN was reported to be associated with CTS due to its relatively higher cross sectional area (CSA) compared to a non-BMN which may lead compression in carpal tunnel.[1,11-13] However, in a more recent study Granata et al.,[14] reported similar frequencies of BMN in patients with CTS and the healthy control group. Hence, we aimed to determine the BMN frequency in patients with CTS and healthy control group, and to investigate the aforementioned association between CTS and BMN in our population.

This prospective study was conducted in a tertiary medical center and approval was obtained from the local ethics committee of the university. Both verbal and written informed consents were obtained from all participants.

The patients were recruited from those admitted to the neurology clinic with complaints of CTS. The clinical diagnosis of CTS was based on the American Academy of Neurology clinical diagnostic criteria, 1993.15 The control group included asymptomatic healthy subjects (hospital attendants, medical students and patient attendants) who had both negative results for Tinel and Phalen tests.

Participants with a history of cervical radiculopathy, polyneuropathy, diabetes mellitus, rheumatoid arthritis, bony fracture of forearm, acromegaly, hypothyroidism, and pregnancy were excluded. Patients who were treated with steroid injections or surgery previously were excluded. The age, height and weight of the all subjects were recorded. Nerve conduction studies and ultrasonographic examination were performed to all subjects.

Electrophysiological evaluation: Electrophysiological examinations were performed using a Nihon Kohden Neuropack MEB-9400K EMG/ evoked potential measuring system (Nihon-Cohden Corp, Tokyo, Japan), by the same examiner. Conventional sensory and motor conduction studies were performed on the upper limbs. Sensitivity for the motor nerve conduction study was 2000 μV, and for the sensory or mixed nerve conduction, it was 10 μV. Low and high filters for motor nerve studies were 20 Hz and 10 KHz respectively. Low and high filters for sensory NCSs were 20 Hz and 2 KHz respectively. Skin temperatures were measured by placing the probe on the forearm. Upper extremity temperatures were maintained above 32 °C.

Ultrasonographic examination: After clinical and electrophysiological diagnosis of CTS, patients were referred to the radiology clinic and underwent ultrasound (US) examination. The ultrasonographic evaluation was performed by a radiologist who was blinded to the clinical and electrophysiological evaluation, using 12-17 MHz linear array transducers (Aplio XG, SSA 790A, Toshiba Medical Systems Corporation®, Nasushiobara, Japan, 2011). Participants were seated facing the examiner with arm along the shoulder and elbow flexed, the forearm lying on the knee. The full course of the median nerve in the tunnel in axial and sagittal planes was evaluated. If the median nerve was divided into two branches proximal to the carpal tunnel, it was considered as BMN (Figure 1). 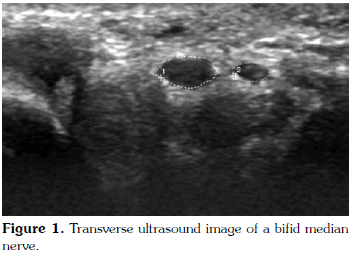 Sex was not significantly different between groups (p=0.827), while the difference of mean age was significant (p<0.001). The mean body mass index of the CTS group was significantly higher compared to controls (28.94±5.11 and 25.47±4.83 respectively, p<0.001). Of the 194 wrists investigated, 60 (30.9%) had mild, 100 (51.5%) had moderate, while 34 (17.6%) had severe CTS. Bifid median nerve was detected on 22 wrists (11.3%) in the CTS group and on 15 wrists (10.2%) in the control group. In the CTS group, BMN was unilateral in 18 participants (11 right, 7 left) and bilateral in two patients. In the controls, 11 participants had unilateral BMN (3 right, 8 left), while two of them had bilateral BMN. The ratio of BMN was not significantly different between patients with CTS and healthy volunteers (p=0.891). All 18 patients with unilateral BMN had CTS bilaterally. The severity of CTS was the same in both wrists in the majority patients, only one patient had mild CTS on the wrist with normal median nerve and moderate CTS on the wrist with BMN. Therefore, it was concluded that the existence of the BMN had no influence on electrophysiological CTS severity.

One of the main goals of the present study was to investigate the association between CTS and BMN. Our study results revealed that the frequency of BMN was similar in patients with CTS and healthy volunteers. Accordingly, BMN may not be a predisposing factor for CTS.

In the study of Granata et al.,[14] BMN was observed in 30 of 162 (18.5%) wrists in the CTS group and in 16 of 104 wrists (15.4%) in the control group. Similar to the findings of this study, they reported no relationship between CTS and BMN. They also suggested that BMN might not also be a risk factor of developing CTS.

In contrast with this study, Bayrak et al.,[11] reported a higher prevalence of BMN in patients with CTS (19% in CTS and 9% in control group) in their study having the largest sample among studies investigating the association between BMN and CTS. They suggested that BMN might facilitate compression of the nerve in the carpal tunnel due to its relatively higher CSA compared with a non-BMN. The size criterion for ultrasound diagnosis in CTS patients with a BMN was slightly higher than in those with a non-BMN (0.11 and 0.09 cm2). Participants in the control group were not examined with NCS if their median nerve CSA was <0.10 cm2 at the level of the pisiform. Since the swelling ratio was demonstrated to be a more reliable sonographic method[8] in CTS diagnosis, patients with subclinical CTS with a median nerve CSA <0.10 cm2 might be included in the control group instead of the CTS group. This situation may have an effect on the percentage of BMN's in the two groups, as the number of patients may change after reevaluation.

Bayrak et al.[11] also reported that the possibility of anatomical median nerve variation should be taken into consideration in patients with unilateral or severe CTS in non-dominant hand. Indeed, BMN was unilateral in a high proportion of the CTS patients in this study. However, BMN was also mostly unilateral in healthy volunteers.

In a recent study by Pierre-Jerome et al.,[17] anatomical variations of the median nerve were retrospectively investigated in patients who underwent magnetic resonance imaging of the wrist for various reasons, and the BMN prevalence was found as 19% regardless of sex and age. However, this percentage was overall and the methodology and the results did not permit comparison of BMN prevalence in patients with and those without CTS. In the current study, the mean age was significantly higher in patients with CTS; however, according to results of the study mentioned above it did not influence the prevalence of BMN.

We noted several limitations of this study. One of them is the number of subjects investigated, a higher number of patients would lead to a more robust and definitive conclusion. The methodology of NCS's used in the clinical trials may vary. Nerve conduction studies have been reported to have a sensitivity ranging between 56% and 85%, and specifity equal to or over 94%.[18] The difference in sensitivity and specificity values in the NCS used may have a limited influence on the results. Patient age and hand dominance were reported to be the major factors to predict a median nerve variation in their study reviewing surgical findings of patients who underwent carpal tunnel release, by Singer and Ashworth.[19] In contrast, Bayrak et al.,[11] found no difference between patients with and those without BMN regarding age. In this study, the mean age was lower in the control group and hand dominance was not noted; indicating another possible limitation of the study. Another limitation of the study was that the CSA, swelling ratio and bowing ratio of the median nerve were not measured. Since these measurements may help to estimate the severity of median nerve entrapment, they would have improved the power of the study.

In general, typical clinical signs and symptoms supported with neurophysiological findings lead to the diagnosis of CTS.[20] Currently, there is increasingly use of ultrasound in the diagnosis of carpal tunnel syndrome, both providing morphological information and the severity of the entrapment. There are several advantages of ultrasonography over electrophysiological studies in CTS diagnosis such as being non-invasive, tolerable by the patients, widely accessible, may depict structural changes of the nerve and surrounding tissues. While electrophysiological findings can demonstrate median nerve functional abnormalities, ultrasound can demonstrate underlying structural abnormalities in CTS.[21] In the literature, the presence of BMN was reported to be a risk factor for surgical failure in patients with CTS. The frequency of surgical failure in CTS patients was 3%, whereas it was reported to be more than 50% in patients with BMN.[14,22,23] Ultrasonographic examination of patients before carpal tunnel surgery may also be used to predict prognosis.

In conclusion, our study results showed that the incidence of BMN was similar among CTS patients and healthy volunteers. Therefore, we conclude that BMN may not be a predisposing factor for CTS.