Patients and methods: We retrospectively reviewed the medical records of 1,772 patients, who suffered from systemic lupus erythematosus (SLE) admitted to the Department of Rheumatology of Shanghai Renji Hospital between January 1999 and December 2011. Seventy-six patients were diagnosed with NPSLE. Demographic characteristics of the patients and clinical manifestations were analyzed and laboratory abnormalities were recorded.

Conclusion: Patients with NPSLE may display various clinical manifestations and laboratory abnormalities. These patients can be effectively treated with corticosteroids and immunosuppressants.

Neuropsychiatric systemic lupus erythematosus has been considered in SLE patients with neurological and psychiatric disorders, but without other identified causes.[9] The condition was first recognized by the American College of Rheumatology (ACR), and 19 neuropsychiatric (NP) definitions were established in 1999. The overall global prevalence of NPSLE in SLE patients ranges from 12% to 95%.[10,11] Currently, the pathogenesis of NPSLE remains poorly understood. The common manifestations of NPSLE include cognitive dysfunction, delirium, anxiety disorder, mood disorder, and psychosis.[12] However, many patients do not display typical clinical and laboratory characteristics. Despite substantial advances in the understanding of lupus and in the development of diagnostic technology, many physicians still face challenges in the precise diagnosis of NPSLE in the clinics. A previous study has shown clinical and laboratory features of NPSLE in Northern Chinese.[13] However, people in Southern China have unique lifestyles and whether patients with NPSLE display similar clinical and laboratory characteristics has not yet been clarified.

In this study, we aimed to describe the clinical manifestations, laboratory abnormalities, and therapeutic responses of NPSLE among Chinese population. We believe that our findings would be useful for the early diagnosis of such patients.

The medical records, patient folders, and clinical charts of 1,772 SLE patients admitted to the Department of Rheumatology of Shanghai Renji Hospital, China, between January 1999 and December 2011 were retrospectively reviewed. Individual Chinese patients with SLE were diagnosed according to the revised criteria for the diagnosis of SLE, established by the ACR in 1997. Their systemic lupus erythematosus disease activity index (SLEDAI) was recorded. A total of 76 patients (66 females and 10 males) were diagnosed with NPSLE, according to the definitions of the ACR.[14] Individual NPSLE patients were diagnosed by the consent of rheumatologists, neurologists, and psychologists. Individual patients with infection, electrolyte disturbances, metabolic disorder, or hypertension that might cause NP syndromes were excluded.

Clinically, these patients not only displayed SLE-related symptoms, such as high fever, skin rash, cutaneous vasculitis, proteinuria, and thrombocytopenia (Table 1), but also developed NP manifestations (Table 2). There were 14 types of NP presentations in these patients, including seizures (epilepsy, 47%), delirium (26%), headache (18%), psychosis (13%), cerebrovascular disease (13%), cognitive dysfunction (12%), transverse myelitis (9%), mood disorder (8%), movement disorder (3%), anxiety disorder (3%), polyneuropathy (3%), aseptic meningitis (3%), cranial neuropathy (1%), and autonomic dysfunction (1%). There were 42 patients, who had a single NP presentation with a mean SLEDAI score of 19.09, and 25 out of the 76 patients had two NP presentations simultaneously with a mean SLEDAI score of 20.84. Another nine patients with three or more NP presentations had a mean SLEDAI score of 28.44. Laboratory examinations revealed that most patients had abnormal plasma albumin/globulin ratios, high values of erythrocyte sedimentation rate, lower levels of serum complement-3 (C3), and positive anti-ANA, anti-dsDNA, anti-RNP, and anti-Ro- SSA (Table 3). Furthermore, they also had high pressures of CSF and high concentrations of CSF proteins, immunoglobulin G (IgG), and chloride. In addition, radiological tests revealed that 44 patients (58.0%) displayed abnormal features in the brain MRI before treatment. The most common finding was white matter lesions. Some patients presented with diffuse abnormalities on perfusion CT images. 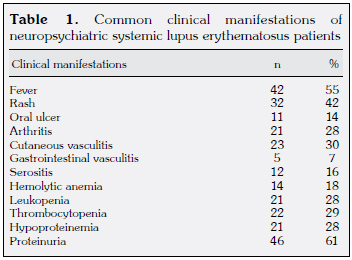 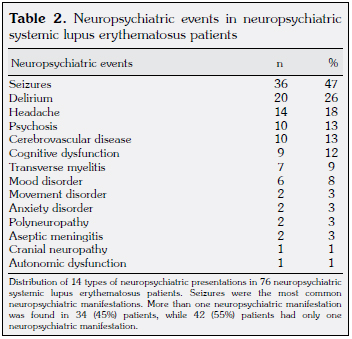 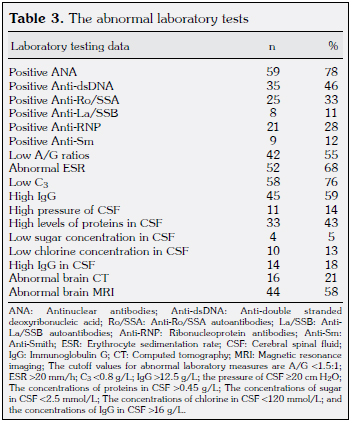 All patients received oral corticosteroids (a mean dosage of prednisone 25.45 mg/day). Furthermore, 45% (n=34) of patients were treated intravenously with one to three courses of ≥200 mg methylprednisolone daily for three consecutive days. In addition, 11% (n=8) of patients were injected intrathecally with 10 mg dexamethasone. Another 59% (n=45) of the patients were treated intravenously with 0.6~1.0 g/month of CTX. There were 10 patients (13%) treated with oral MTX, 15 (20%) with oral AZA, 13 (17%) with anti-epileptic drugs, and 16 (21%) with anti-psychotic drugs when necessary. The dosage of immunosuppressive agents and symptomatic medications were adjusted according to the patients' condition. Following regular treatment with steroid and CTX, MTX, AZA, anti-epileptic drugs, or anti-psychotic drugs, 53 patients survived, with a mean age of 27.9±11.7 years. Their mean disease duration was 2.87±2.56 years (range 0.5 to 12.4 years). Of note, 37 out of the 76 patients completely recovered, and were treated with a regular steroid therapy (1.25~30 mg prednisolone daily). Thirteen out of the 76 patients had sequels: cerebrovascular disease (n=4), transverse myelitis (n=2), cognitive dysfunction (n=2), psychosis (n=1), delirium (n=1), polyneuropathy (n=1), movement disorder (n=1), and seizure (n=1). Other three patients with seizures relapsed. However, three patients had recurrent seizures after stopping medications by themselves or due to potential drug toxicity.

During this period, 12 out of the 76 NPSLE patients died from NPSLE-related manifestations or complications. They had a median age of 35 years (ranging 14 to 58 years), and they died two days to 36 months (median 6 months) after the diagnosis of NPSLE. Of these, eight patients displayed one type of NP manifestation, such as seizures (n=3), transverse myelitis (n=2), delirium (n=2), and cerebrovascular disease (n=1), while the other four cases presented with at least two types of NPSLE manifestations. After excluding other factors, five NPSLE patients had severe infection, two patients with status epilepticus or cerebral hemorrhage, and one patient with the liver failure, multiple organ failure, or diabetes.

Patients with NPSLE usually have diverse clinical manifestations, and the prevalence of NPSLE and outcomes vary in different populations.[15-17] The ACR developed a standard nomenclature and a set of case definitions for NPSLE in 1999. Previous studies reported that 80-91% of SLE patients had NP manifestations.[18,19] In this study, we retrospectively reviewed 1,772 SLE patients who were admitted to our hospital, and defined 76 patients with NPSLE, accounting for a prevalence of 4.3% in our study population. The low prevalence in our study may possibly stem from the exclusion of most NPSLE patients with mild clinical presentations. However, we are interested in further investigating the real prevalence of NPSLE in the Chinese population by including SLE patients in an outpatient service.

In our study, 51% of NPSLE patients developed NP events within the first year after SLE onset, consistent with previous findings.[5,20,21] The early development of NP-related events in most NPSLE patients may come from the inappropriate control of SLE during initial treatment. Furthermore, we found that 76 NPSLE patients displayed 14 types of NP manifestations and that the most common NP manifestation in this population was seizure (47%), followed by delirium, headache, psychosis, and cerebrovascular disease, similar to the findings from another Chinese population.[13] However, seizure is less common in other ethnic populations of NPSLE patients.[22,23] In addition, while previous studies report only 3.7-7% of patients with delirium,[19-22] we found 26% of the NPSLE patients with delirium. Given that seizure and delirium are severe clinical presentations, the high prevalence of seizure and delirium may be associated with the disease severity in our hospitalized NPSLE patients. Alternatively, it is possible that Chinese NPSLE patients may be more likely to have seizures and delirium. The precise mechanisms underlying the high prevalence of these clinical manifestations remain to be further investigated.[24-26]

There is no single laboratory examination specific for the diagnosis of NPSLE.[27-31] We found that most patients presented with positive ANA, lower levels of serum C3, abnormal erythrocyte sedimentation rate, and higher levels of serum IgG as well as abnormal cranial MRI brain imaging, similar to previous studies.[30,32] Although a single abnormal measure is not specific, the combination of these abnormal tests may help in the diagnosis of NPSLE. In our study, 58.0% of patients displayed abnormal MRI features of white matter lesions, which were consistent with a previous observation.[30] Of note, this abnormal MRI feature was not NPSLE-specific and it may display in other types of central neuropsychiatric events. Therefore, the MRI results should be carefully interpreted in those with NP-related symptoms.

Our study has some limitations. First, it was retrospective and its findings depended on available information. The study was performed on hospitalized patients in a single center with a small sample size. Our study did not analyze the age- and sex-matched patients with SLE alone and did not analyze potential factors contributing to the development and severity of NPSLE in this population. Therefore, further studies are warranted with a large population in multiple centers.

In conclusion, our study indicates that NPSLE patients may present diverse clinical manifestations and abnormal laboratory tests. In our study, most patients responded to highdose corticosteroids and immunosuppressants, however, some severe patients died from infection. Hence, prevention and early control of infection are crucial for the survival of patients.