Objectives: This study aims to evaluate the association between vitamin D deficiency and disease activity in children with juvenile systemic lupus erythematosus (SLE).

Patients and methods: A total of 16 children (13 girls and 3 boys; mean age 14.47 years; range 5-18) with SLE who were under followup in our clinic were included in this study. The medical records of the children along with the demographic data, disease duration, treatments received, disease activity, and 25-hydroxyvitamin D [25-(OH)D] levels were evaluated. Systemic lupus erythematosus disease activity (SLEDAI) scores were calculated on the day the serum samples were drawn.

Conclusion: Our study results show that there is a strong negative association between disease activity and vitamin D deficiency in children with SLE. The vitamin D levels of these patients should be evaluated on a regular basis, and vitamin D supplements should be given, if necessary.

Vitamin D is an essential steroid hormone that has a primary role in mineral metabolism, skeletal health, and the immune system.[1] Since an epidemic of vitamin D deficiency has recently been recognized, many publications have revealed an association between vitamin D deficiency and several diseases with high morbidity and mortality.[2] Although the precise etiologic mechanisms are unclear, it is becoming apparent that unrecognized vitamin D deficiency contributes to the increasing incidence and severity of many chronic health conditions. In addition, evidence is accumulating which suggests that vitamin D also plays a key part in the pathogenesis and progression of autoimmunity.[1,3] Vitamin D receptors are found on several immune cells, and in vitro studies have shown that vitamin D metabolites modulate T cell proliferation and dendritic cell function by inhibiting the development of T helper 1 cells (Th1) and Th17 cells while promoting the growth of Th2 and T regulatory (Treg) cells. In B cells, vitamin D inhibits antibody secretion and autoantibody production, and vitamin D has the overall effect of immunosuppression.[1-3]

Systemic lupus erythematosus (SLE) is a chronic, inflammatory, multisystemic autoimmune disease characterized by many cellular and humoral immunological abnormalities, and the inappropriate T-cell-dependent expansion of autoreactive B cells is considered to be crucial for the production of pathogenic autoantibodies. In the last few years, the possible role of vitamin D in the pathogenesis and activity of SLE has risen to new levels based on the results and observations of clinical and laboratory studies. Furthermore, in human lupus studies, it was found that 1.25-dihydroxyvitamin D3 [1.25-(OH)2 D3] and its analogs inhibit polyclonal and anti–double-stranded DNA (anti-dsDNA) and immunoglobulin G (IgG) production by mitogenstimulated peripheral blood mononuclear cells (PBMCs).[4]

Multiple SLE cohorts have low vitamin D levels,[5] but the physiological and clinical consequences of vitamin D deficiency in SLE are not entirely known. Although studies of 25-hydroxyvitamin D [25-(OH)D] levels and disease activity in patients with SLE have not had consistent results, most cross-sectional studies show an inverse relationship between the levels of vitamin D and disease activity.[6-12]

Although the association between disease activity and serum levels of 25-(OH)D has been demonstrated in adults, considerably less is known about this relationship in children with SLE. The aims of this study were to evaluate the vitamin D status in pediatric patients with SLE and to examine whether there is an association between the serum levels of 25-(OH)D and disease activity in this autoimmune disease.

We evaluated the medical records of 16 children (13 girls and 3 boys; mean age 14.47 years; range 5 to 18) with SLE who had an outpatient visit at our clinice between March 2011 and September 2011, and documented the demographic data, disease duration, clinical manifestations, blood pressure, disease activity, serum 25-(OH)D levels along with other laboratory findings, medications used for SLE treatment, and use of vitamin D supplements for these pediatric patients.

The revised American College of Rheumatology (ACR) criteria was used for the diagnosis of SLE,[13] and disease activity was determined using each patient’s Systemic Lupus Erythematosus Disease Activity Index (SLEDAI) score on the day the serum samples were drawn. This score consisted of 24 weighted attributes that were grouped into the following nine domains known as organ systems (weightings in parentheses): central nervous system (8), vascular (8), renal (4), musculoskeletal (4), serosal (2), dermal (2), immunological (2), constitutional (1), and hematological (1). The sum of all of the weighted attribute scores was then used to calculate the final SLEDAI score. These ranged between 0 and 105, with 0 indicating no disease activity.14,15 Body mass index (BMI) was calculated by dividing the weight (kg) by the square of the height (m2), and the glomerular filtration rate (GFR) was estimated using the new Schwartz formula.[16] Concentrations of 25-(OH)D of less than 15 ng/ml were considered to be at deficient levels, and this cutoff point for children has been accepted by most experts.[17]

Statistical analysis was performed using the SPSS version 16.0 for Windows software program (SPSS Inc., Chicago, IL, USA). Furthermore, the Mann-Whitney U test analysis for nonparametric data was used to compare the clinical data between the two groups, and Pearson’s correlation coefficient was used to analyze any correlations between the SLEDAI and 25-(OH)D. A p value of <0.05 was considered to be statistically significant.

The median follow-up period for the patients was 30 months (range 9-55). The mean serum vitamin D level was 22.04±16.75 ng/ml, and vitamin D deficiency (serum vitamin D level <15 ng/ml) was detected in eight children (50%), six of whom had significantly lower vitamin D levels (<10 ng/ml). The patients’ demographic and baseline characteristics, SLEDAI scores, and laboratory data are presented in Tables 1 and 2.

Table 1. Demographic and clinical characteristics and laboratory data of the patients
× 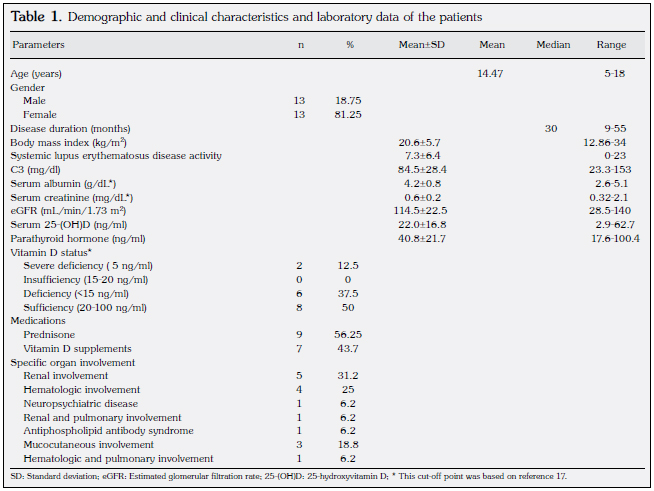 Table 2. Demographic, clinical and laboratory parameters of each patient
× 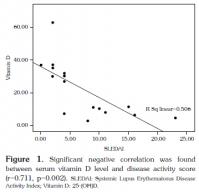 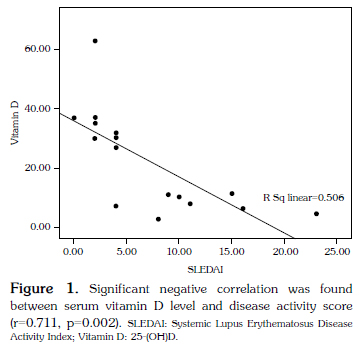 In this study, we demonstrated that serum 25-(OH)D was significantly related to disease activity in children with SLE, and this correlation was independent of age, disease duration, C3 levels, eGFR, serum creatinine, and BMI. In addition, 50% of the children with SLE had a high incidence of vitamin D deficiency. Our findings were consistent with a large number of cross-sectional studies on vitamin D status and SLE in adults which show higher rates of vitamin D deficiency,[11,18] and they also agree with other studies that identified a strong inverse relationship between 25-(OH)D levels and disease activity.[6,8] However, Orbach et al.[9] failed to show any correlation between disease activity and serum 25-(OH)D levels in adult patients with SLE in their study.[9]

Few studies exist that have evaluated serum levels of 25-(OH)D and disease activity in SLE patients. In a study from Canada by O’Regan et al.,[19] seven of 12 adolescents who had SLE with a disease duration ranging from one to eight years reported low 1.25-(OH)2 D3 levels; however, they did not evaluate the levels of 25-(OH)D, which is the best indicator of vitamin D availability. Additionally, Pelajo et al.[7] reported that the mean serum 25-(OH)D levels were 21 ng/ml in 18 children with SLE, and that children with mixed connectivetissue disease and SLE had lower serum 25-(OH)D levels compared with other autoimmune disorders. They also found no association between disease activity and serum 25-(OH)D levels, which could be explained the fact that the tool they used to measure disease activity was based only on the attending physician’s assessment. Moreover, Robinson et al.[20] found that vitamin D levels were lower in patients with SLE who had proteinuria than in those who did not have this condition (11.9 and 25.0 ng/ml, respectively). Moreover, they also determined that vitamin D levels were associated with disease activity. We did not evaluate this same association because of the small sample size and retrospective nature of our study.

Because patients with SLE have multiple risk factors for vitamin D deficiency, including longterm usage of corticosteroids, a high percentage of renal involvement, hydroxychloroquine usage, anti-vitamin D antibodies, and the need to avoid sun exposure, the prevalence of vitamin D deficiency is higher for them than for the general population.[2,21] In our study, nine of the 16 children were being treated with steroids. but no significant differences were observed among the 25-(OH)D levels and SLEDAI scores of these patients nor the seven others who were not receiving steroid treatment (p>0.05). However, this could have been the result of the small sample size of our study or the fact that the patients taking steroids were also using vitamin D supplements.

Patients with SLE should avoid the sun because of photosensitive rashes and the potential for disease flare-ups; hence, adequate oral vitamin D supplementation is critical.[21,22] In our study, six of the patients (37.5%) were using vitamin D supplements, and a significant difference was observed in both 25-(OH)D levels and SLEDAI scores between the patients who were taking these supplements and those who were not (p=0.009 and p=0.007, respectively). In view of these findings, in spite of the limited number of study participants, we believe that regular screening of serum 25-(OH)D levels in children with SLE should be performed and that vitamin D supplementation should be given if necessary.

Recently, vitamin D deficiency has been recognized as a global health problem and can now be detected in patients of all ages.[2] Therefore, controlled trials with healthy control groups are needed to evaluate the role of vitamin D on SLE. In a study of 36 lupus patients (12 with high activity and 24 with minimal activity), the subgroup of patients with high activity had significantly lower vitamin D levels than the healthy controls.[10] To the best of our knowledge, there have been no controlled studies regarding this topic that have focused on children.

Our study had several limitations, including its retrospective nature, the small sample size, and lack of available information about diet, sun exposure, and use of sunscreens, all of which may have influenced the serum 25-(OH)D levels. Therefore, it could be speculated that the low levels of 25-(OH)D in the SLE patients in our study might stem from the risk factors, which would mean that they were not the source of the disease activity.

Vitamin D deficiency is quite common in children with SLE, and our findings indicated that 25-(OH) D levels had a strong inverse relationship to disease activity. The causality of these associations still needs to be assessed via longitudinal studies aimed at evaluating the therapeutic value of vitamin D supplementation.