Objectives: This study aims to investigate the relationship between the molecular heterogeneity of prolactin (PRL) and anti-doublestranded deoxyribonucleic acid (anti-dsDNA), anti-C1q, and complement 3 (C3) levels in patients with systemic lupus erythematosus (SLE).

Patients and methods: This study included 30 premenopausal females with SLE from the Rheumatology Clinic of Doctor Saiful Anwar General Hospital in Malang, Indonesia and 30 healthy females as the control group. Prolactin heterogeneity (small and large) was determined using the ultra filtration method and electrochemiluminescence immunoassay, while the total PRL, anti-dsDNA, anti-C1q, and C3 serum levels were measured by enzyme-linked immunosorbent assay.

Conclusion: The activity disease of SLE patients was correlated with the level of small PRL but not with total PRL.

Systemic lupus erythematosus (SLE) is an autoimmune disease characterized by the presence of autoantibody, which leads to multi-organ impairment.[1] It occurs at a ratio of 9:1 in females versus males and is more commonly found during reproductive periods. The suggestion has been made that sexual hormones, including prolactin (PRL), play a role in the occurrence of SLE,[2,3] In addition, the hormones produced by the anterior pituitary gland and the extrapituitary tissues, including lymphocyte T and B PRL receptors, may be found in lymphocytes, monocytes, neutrophils, natural killer cells, and thymic epithelial cells. Furthermore, it has been established that PRL is associated with interleukin 2 (IL-2) expression, T-cell proliferation, and the modulation of B cell proliferation.[4]

Several studies have reported significantly higher PRL levels in SLE patients, and these higher levels of PRL compared with the controls were significantly related to SLE activity.[4,5] Prolactin can be found in the circulation in one of three isoforms based on its molecular weight: monomeric PRL (small PRL; molecular weight 23 kDa), dimeric PRL (medium PRL; molecular weight 50-60 kDa), and polymeric PRL [large PRL/ macroprolactin (maPRL); molecular weight 150-170 kDa).[6] Moreover, a previous report by Vera-Lastra et al.[7] indicated that small PRL had more of an influence on SLE activity; however, another study by García et al.[8] found that maPRL affected SLE activity more profoundly.[8] Thus, the role of PRL in the pathogenesis of SLE remains unclear. Elevated PRL in SLE patients, mediated by the dysregulation of pro-inflammatory cytokines, may lead to T-lymphocyte activation and the upregulation of B cell proliferation and differentiation.[9]

The occurrence of various autoantibodies is characteristic of SLE. Elevated anti-double-stranded deoxyribonucleic acid (anti-ds-DNA) levels and lower complement 3 (C3) and C4 levels have been used as one of the indicators for the Safety of Estrogens in Lupus Erythematosus National Assessment (SELENA)-Systemic Lupus Erythematous Disease Activity Index (SLEDAI) modification. Furthermore, the SLEDAI has been utilized as a standard diagnostic procedure to measure disease activity in SLE patients. Leaños-Miranda and Cárdenas-Mondragón1 reported that SLEDAI scores had a positive correlation with serum small PRL levels. Moreover, a previous study by Sangle et al.[10] identified a correlation between elevated anti-C1q antibodies and decreased C1q levels in nephritic lupus patients.10 The aim of this study was to investigate the correlation between PRL molecular heterogeneity (both large and small) and the anti-ds-DNA and anti-C1q autoantibodies along with the C3 levels in SLE patients who were admitted to Doctor Saiful Anwar Malang General Hospital in Malang, Indonesia.

The study consisted of 30 female patients with SLE (American College of Rheumatology 1997 classification) and 30 healthy, age-matched females in the control group. The patients were new onset and were being followed up at the Rheumatology Clinic of the hospital or had been admitted to the Internal Medicine Department ward. All had received treatment for less than three months and were at least 18 years of age and premenopausal. In addition, they were not taking hormonal contraceptives nor were they pregnant or lactating.

All of the patients were asked about their medical history and a physical examination was also performed. Additionally, we also determined their total PRL, PRL heterogeneity (small and large PRL levels) along with their anti-ds-DNA, anti-C1q, and C3 concentrations. The patients were then selected via a randomized sampling method. The study was approved by the Ethics Committee of the Medical Faculty of Brawijaya University and Doctor Saiful Anwar Malang General Hospital, and written informed consent was obtained from all of the participants.

Assessment of the total PRL levels
The total concentration of PRL serum was determined using an enzyme-linked immunosorbent assay human prolactin kit (Anogen, Missasauga, Ontario, Canada) and this was used as previously described by Cruz et al.[11] The anti-PRL antibody, which was coated to the microwells, was added to 50 μL of the diluted sera of each patient and then incubated. Afterwards, each well was washed to remove any unbound antigens. Next, the second antibody (antihuman antibody), labeled as the horseradish peroxidase (HRP) enzyme, was added to each well, and after washing, the substrate solution was also added and then incubated for 15 minutes. Following this, the stop solution was added, and the color change was measured spectrophotometrically at a wavelength of 450 nm.

Assessment of prolactin heterogeneity
The procedure was performed in two phases. First, we isolated the large fraction of PRL and calculated the recovery percentage (R%) and then we isolated the small PRL and measured the concentration. The large PRL (maPRL) with a molecular weight of >100 kDa) was isolated from the medium and small PRL using an Amicon® Ultra- 0.5 100K device supplied with two microcentrifuge tubes (EMD Millipore Corporation, Billerica, MA, USA), and 500 μL of sera was quickly dispensed into each tube and then centrifuged for 45 minutes. Afterwards, the result (an ultrafiltrate with a molecular weight of <100 kDa) was measured for PRL concentration (medium and small) using the enzyme-linked immunosorbent assay, and the R% was calculated. Samples with an R% of less than 40% are considered to contain maPRL (macroprolactinemia).[12,13]

During the second phase, the small PRL was isolated, and its concentration was measured. Then, 200 μL of sera was dispensed into an Amicon® Ultra-0.5 30K device with the same type of tubes as before (EMD Millipore Corporation, Billerica, MA, USA), and the ultrafiltrate was measured for the small PRL using electrochemiluminescence immunoassay method by Cobas E411 analyzer (Roche Diagnostics, Indianapolis, USA).

Assessment of the anti-ds-DNA antibody, anti-C1q antibody, and C3 levels
The measurements for these parameters were performed using the enzyme-linked immunosorbent assay kit, and the changes in color were measured spectrophotometrically at a wavelength of 450 nm.

Statistical analysis
The data was analyzed using the SPSS Statistics version 16.0.0 for Windows software program (SPSS Inc., Chicago, IL, USA). The total PRL and PRL heterogeneity along with the anti-ds-DNA, anti-C1q, and C3 levels were compared between the two groups and tested for statistical significance using an independent t-test. To determine the correlation between the small and large PRL levels and anti-dsDNA, anti-C1q, and C3 levels, Pearson's correlation coefficient was used. A p-value of <0.05 was considered to be significant.

The percentage of subjects with increased PRL levels was much higher in the SLE patients than the control group (p=0.00). In addition, there were no significant differences between the small PRL, autoantibody, and C3 serum levels in the group of SLE patients, regardless of whether they had high PRL levels or not (Table 2). The majority of the SLE patients had maPRL, but no differences were seen regarding the mean age, SLEDAI scores, autoantibodies, or C3 levels in either these SLE patients or those without this characteristic (Table 3). However, the total PRL levels were significantly different (p=0.00). Upon further analysis, the frequency of maPRL in hyperprolactinemia group was five patients (45%). 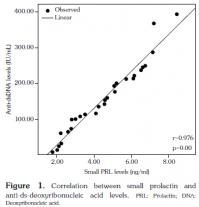 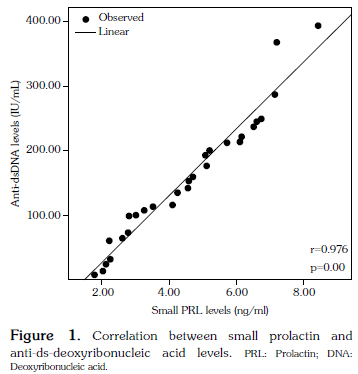 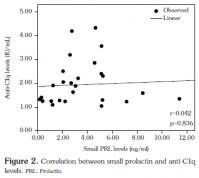 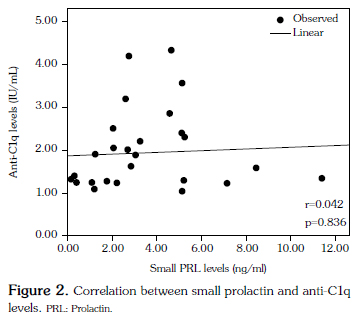 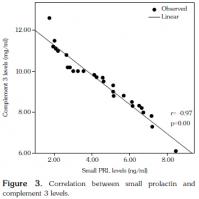 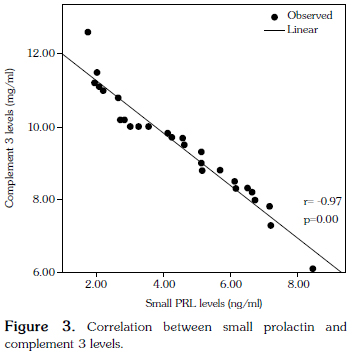 Immunosuppressive treatments, such as cyclosporine (CsA), have been reported to affect the PRL by competing directly with it to bind its receptor onto the B and T lymphocytes.[16] Furthermore, Ishibashi and Yamaji[17] reported that chloroquine inhibited PRL secretion in pituitary cell cultures. However, the medical treatment of our patients with SLE did not differ significantly between the patients with hPRL (n=11) and those without (n=19).

Only 36.67% of the 30 healthy control subjects had no HPRL, In SLE, dysregulation of proinflammatory cytokines occurs, resulting in the activation of the hypothalmic-pituitiary-adrenal (HPA) axis, and this further induces the production and secretion of PRL. In addition, the extrapituitary production of PRL is also associated with SLE.[18]

Jara et al.[14] suggested that the difference in the mean total PRL level between the SLE group and healthy controls was the result of cytokine-induced PRL stimulation, the peptidergic modulator defect, and a decrease in dopamine metabolism in SLE patients. They also found that interaction between the PRL, cytokines, autoantibodies, and target organs showed that the PRL is involved in both the local and systemic inflammatory processes, and it plays a role as a bridge between the neuroendocrine and immune systems as well. In their study, Peeva and Zouali19 determined that there was an increase in the production and secretion of PRL in the presence of the deregulation of proinflammatory cytokines in SLE and that this resulted in increased PRL binding by the PRL receptors on T cells as well as the further induction of T cell production. Additionally, this also led to the secretion of IL2, a cytokine that promotes the differentiation and maturation of B cells. The mean total PRL in both the SLE and healthy controls in our study was significantly different (Table 1), contrasts with the study by Zahra et al.[20] which reported that there was no significant difference between lupus and control group. However, this difference may have been caused by racial and genetic factors.[6,

Our study revealed that 45.45% (n=5) of the SLE patients with hyperprolactinemia (n=11) had an R% of <40%, suggesting that large PRL (maPRL) was adequately predominant. Vallette- Kasic et al.[22] found that for at least 10% of the subjects with elevated PRL, high levels of maPRL were the source. Similar results in the study by Hattori[23] suggest that maPRL may also result in idiopathic hPRL. However, 63.33% of our SLE patients had macroprolactinemia, which was markedly higher than the findings in other studies (16-26%).[23]

Our results suggest an association between small PRL and the serum levels of anti-dsDNA, C3, and the SLEDAI, and our findings support the data from the study by Leaños-Miranda and Cárdenas-Mondragón1 which showed that small PRL has higher bioactivity compared with large PRL. In vitro large PRL is active, but it is not able to penetrate capillary walls; therefore, a delay in clearance occurs, and the feedback mechanism, as a result of the hPRL levels, is presumably disturbed. One possible reason for this is that the complex may not have been able to reach the hypothalamus, which is not an issue with small PRL.

Small PRL can also directly promote the maturation of B cells through the upregulation of bcl 2 gene expression in such a way that the negative selection of autoreactive B cells is inhibited. The B cells then form various autoantibodies, including anti-dsDNA, anti-PRL, and anti-C1q, that activate the complement system through a classic pathway, resulting in complement deficiency.[24] A study by Katsumata et al.[25] found a significant correlation between high anti-C1q levels and SLE activity. In addition, Fang et al.[26] reported a distribution of the IgG subclass on the antibody anti- C1q, suggesting that IgG2 anti-C1q is pathogenic and may be used as a specific biomarker to monitor disease activity.

In this study, we did not evaluate the association between the medium PRL levels and anti-dsDNA and anti-C1q or C3 because the medium PRL is a homooligomer aggregate of PRL with no bioactivity.[27,28] Moreover, it does not have the ability to promote disease activity like small PRL. Further research to determine the bioactivity of each isoform of PRL in Indonesian (and/or Asian) populations could prove to be beneficial in order to compare the results with other available studies.

We demonstrated that there were significant differences between the total PRL and small PRL levels in the patients with SLE and the healthy controls. The elevated small PRL levels were associated with higher levels of anti-dsDNA and lower C3 concentration, but there was not the same relationship with anti-C1q. In addition, we found no differences in the anti-dsDNA and anti-C1q levels between the hPRL and non-hPRL groups or between the small and large PRL groups.