Osteoid Osteoma of the Sacrum Mimicking Sacroiliitis: A Case Report

A 23-year-old female patient admitted with continuous pain localized in her right sacroiliac joint for four months. She had been diagnosed with sacroiliitis in another clinic. Her plain radiographs, bone scintigraphy and laboratory tests were normal. Magnetic resonance imaging showed a nonspecific edema of the bone marrow at the posterior corner of the sacrum which had been misdiagnosed as sacroiliitis. Computed tomography (CT) showed a nidus located posteriorly at the S2 vertebra of the neighboring sacroiliac joint. A removal of the nidus and pathological examination revealed a diagnosis of osteoid osteoma. Although osteoid osteoma is a very rare entity in the differential diagnosis of sacroiliac pain, it should be kept in mind in the presence of aching pain which is refractory to conservative treatment and responsive to nonsteroidal anti-inflammatory drugs. Magnetic resonance imaging is not always diagnostic, whereas CT is more helpful for diagnosing osteoid osteoma.

Osteoid osteoma is a small, benign bone tumor that causes significant pain. It is composed of osteoid tissue and is surrounded by a halo of reactive hyperostosis.[1] Osteoid osteoma accounts for about 5% of all bone tumors and 11% of benign bone tumors,[2] and it mainly affects adolescents and young adults.[1] This type of tumor predominantly occurs in the appendicular skeleton, but it has been known to appear in the spine in approximately 7-10% of patients. In these cases, the lesion usually occurs in the posterior elements.[3] Osteoid osteoma rarely appears in other parts of the trunk skeleton.[1] In the sacrum, the diagnosis is delayed compared with other sites.[2]

A 23-year-old female presented with localized, continuos pain in her right sacroiliac joint that had been occurring for about four months. She had been previously diagnosed with sacroiliitis at another clinic via magnetic resonance imaging (MRI). Her laboratory tests were normal. For a period of time, she had been treated with nonsteroidal anti-inflammatory drugs (NSAIDs). Although these had provided some amount of pain relief, she did not fully recover. The patient refused further treatment at the same clinic and then came to ours.

On physical examination, there was direct sensitivity at her right sacroiliac joint, but there was no swelling. Patrick's test (flexion, abduction, external rotation) was positive on her right side. She was first evaluated with plain radiographs, bone scintigraphy, and laboratory tests. The radiographs were normal, and the bone scan revealed an increased uptake on the right side of the sacrum adjacent to the sacroiliac joint. The tests for erythrocyte sedimentation rate (ESR), C-reactive protein (CRP), leukocyte count, and brucella agglutination were normal. An MRI showed a non-specific edema of the bone marrow at the posterior corner of the sacrum which could have been easily misdiagnosed as sacroiliitis (Figure 1). A computed tomography (CT) scan revealed a nidus located posteriorly at the S2 vertebra of the neighboring sacroiliac joint (Figure 2). 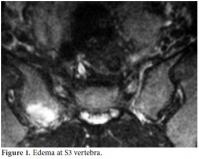 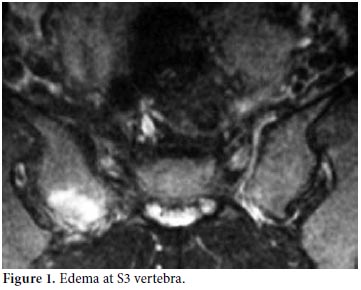 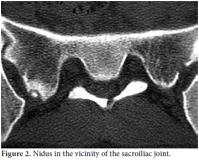 Figure 2. Nidus in the vicinity of the sacroiliac joint.
× 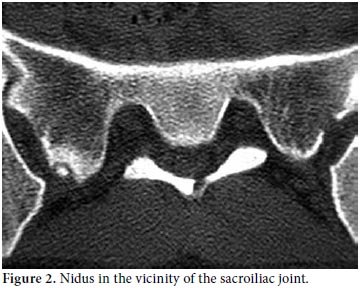 Surgical resection of the osteoid osteoma through a direct incision located at the sacroiliac joint brought immediate relief of the symptoms, and a pathological examination after en bloc surgical excision revealed the diagnosis (Figures 3 and 4).

Figure 3. Nidus in the excised bone.
× 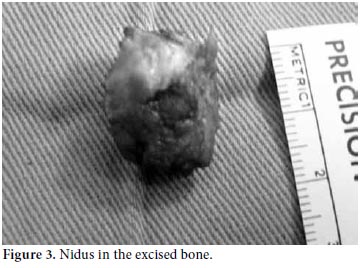 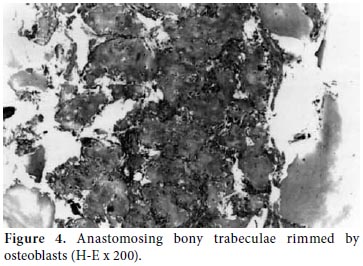 Involvement of the sacrum is extremely rare, and it has also been reported that the diagnosis of osteoid osteoma in the sacrum can be delayed compared with other skeletal sites.[3,4] Having a history of a dull, aching pain that exists for weeks or months which is worse at night and is relieved by aspirin or NSAIDs is such a common characteristic of osteoid osteoma that it is nearly diagnostic.[5] Curettage through a posterior approach is the treatment of choice. Radiotherapy as well as embolization of the feeding arteries may be used for the most aggressive lesions.[1]

In our patient, the diagnosis was delayed and treated as sacroiliitis at the beginning. In the literature, there is only one case report that was misdiagnosed as sacroiliitis,[6] and there was a three-year delay in that diagnosis. In that patient, direct radiography revealed sclerosis. However, in our case, the onset of complaints had only begun four months previously, and there was no finding on the X-ray. Direct radiography, MRI, and even scintigraphy are not beneficial for diagnosing osteoid osteoma of the sacrum. The nidus is located in the center of the thickening and is always surrounded by the reactive bone sclerosis. Hence, in almost all cases, it is only visible via a CT scan.[5] With our patient, excision through a posterior approach was the treatment of choice. The prognosis for osteoid osteoma is generally good, and there is a low incidence of local recurrence (<10%).[4]

Although osteoid osteoma is a very rare entity in the differential diagnosis of sacroiliac pain, it should be considered in cases that involve an aching pain that is relieved with NSAIDs and in cases involving younger patients when the pain is resistant to conventional treatment. Magnetic resonance imaging is not always diagnostic for osteoid osteoma, but CT has been found to be very helpful in the diagnosis of this type of tumor.