Depressive disorders are more commonly observed in patients with rheumatoid arthritis (RA) than with healthy individuals with a prevalence rate of 13-42%, which is more than double the rate for the general population.[1-4] The appearance of major depression in RA patients can be associated with a variety of negative physical and psychological outcomes.[5] Depression in RA patients not only can increase the ability to control the consequences of the illness, but it can diminish the patient's wellbeing and quality of life, resulting in high levels of anxiety and inducing negative perceptions of the illness in the affected patients.[6] Comorbid depression has even been known to be an independent risk factor for death in patients with RA.[7] However, the main referral guidelines for the management of RA did not consider psychosocial factors in the list of recommendations for the evaluation of disease activity and damage.[8] Several factors have been identified which can predict the onset of depression in RA patients, including, having a low socioeconomic level, being female, and having a more severe form of the illness.[9] However, these predictive indices can vary according to different populations. Furthermore, because patients with RA are potentially afflicted by pain and physical disability,[10] it is understandable that there are more frequent depressive symptoms due to these limitations in RA patients than in the healthy population. Unfortunately, there is a limited amount data available regarding the psychological status of Iranian RA patients. In the present study, we first determined the frequency of depression and its severity in RA patients in this country and then identified the main causes for the appearance of depression in these patients.

The study subjects were chosen from the patients who attended the outpatient rheumatology clinic of the Fatemieh and Amir hospitals in Semnan, Iran between March 2009 and April 2010. During this period, 140 patients (28 males, 112 females; mean age 46.4±13.5; range 19-80 years) with no previous history of other rheumatic disorders who met the American College of Rheumatology (ACR) criteria for RA[8] visited the clinic and were categorized as either having active RA (n=56) or inactive RA (n=84). Active disease at the time of the study was defined according to the criteria of clinical remission of the ACR.[11] This study was approved by the research committees of the Semnan University of Medical Sciences.

The eligible patients participated in the study after having the protocol briefly explained to them, and all of them provided written informed consent for participation and completed a self-report questionnaire. The control group was comprised of 140 healthy volunteers who were cross-matched according to age and gender. In addition, the subjects in the control group, who were selected from the official personnel working at the Fatemieh and Amir hospitals, had no history of rheumatological disorders. All of the patients and the controls who agreed to participate in the study were asked to complete a self-report questionnaire to obtain their demographic characteristics, medical history, and onset year of RA, For example, this information revealed that none of the participants had a family history of psychological problems. The questionnaire also included a battery of well-validated self-report inventories for the evaluation of psychosocial factors. After obtaining this information, the depressive symptoms were assessed using the Iranian version of the Beck Depression Inventory II (BDI-II) via a face-to-face interview by an expert, indigenous general practitioner for primary screening. Then the screened subjects were visited by a psychiatrist to confirm the diagnosis. The BDI-II was designed to measure depression severity and has also been validated for the screening of depression in clinical settings. It consists of 21 items, and the scores range from 0-63. According to the BDI-II manual, a score ranging from 10-18 indicates the presence of at least mild-to-moderate symptoms of depression, and scores from 19-63 indicate severe depression.[12] This questionnaire was validated as a tool for measuring depression in Iranian patients with high internal consistency (Cronbach's alpha=0.87) and acceptable test-retest reliability (r=0.74).[13]

A sample size calculation was performed using a mean value of 0.25 for depressive disorders in patients with RA, and additional calculations were performed to determine the number of patients required for this study to have 80% power to detect statistical significance (p<0.05). By accepting a type 1 error of 0.05 and a type 2 error of 0.20, we concluded that 80 patients was sufficient for the number of subjects in the RA groups combined and the control group.

For statistical analysis, the comparison of percentages between the categorical variables was done by a chi-square test, and for checking the normality of variables, we used the Kolmogorov-Smirnov (KS) test. Correlations exhibiting a statistically significant relationship with the appearance of mild-to-moderate depression in univariate analyses were taken for backward multivariate logistic regression analysis to investigate their independence as determinants. This was checked against some baseline variables, including socioeconomic characteristics (female gender, marital status, educational level, and monthly income), medical history [history of diabetes mellitus (DM), hypertension, and coronary disease], and RA-related indices (positive rheumatoid factor and disease duration). In addition, the odds ratio (OR) and 95% confidence intervals (CI) were calculated, and p values of ≤ 0.05 were considered to be statistically significant. All of the statistical analyses were performed using the SPSS (SPSS Inc., Chicago, Illinois, USA) version 13.0 for Windows and SAS (SAS Institute Inc., Cary, North Carolina, USA) version 9.1 for Windows.

Table 1. Baseline characteristics and medical history of the study population
× 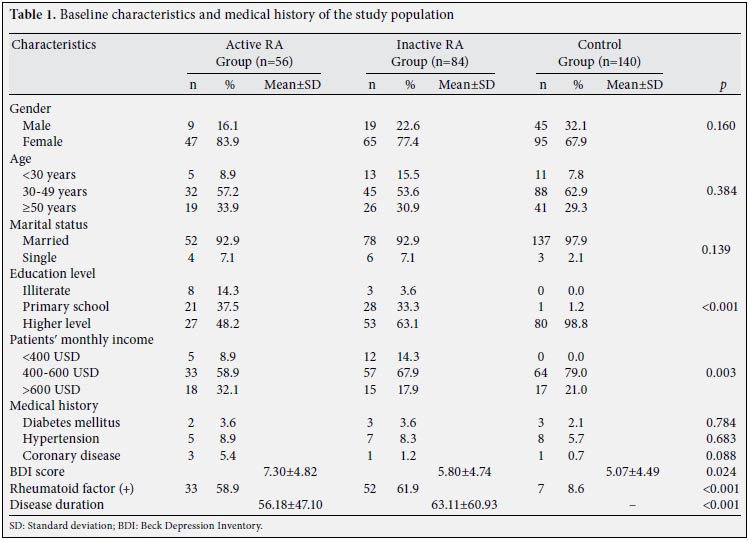 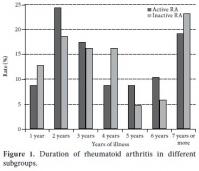 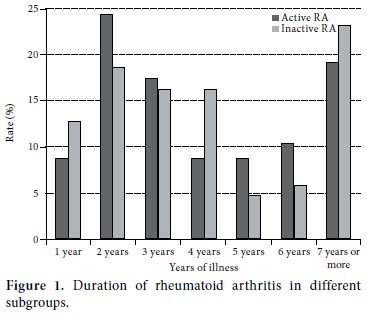 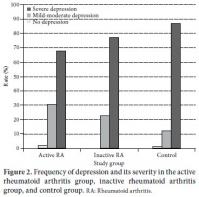 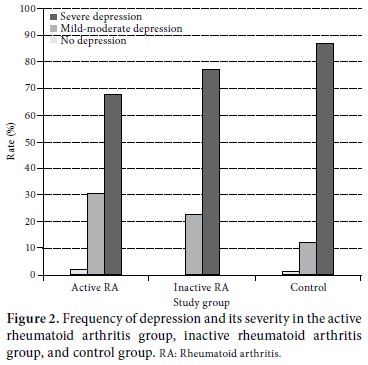 Table 2. Main causes for the onset of depression in rheumatoid arthritis patients
×

To our knowledge, this is the first study involving a sample of Iranian patients with RA that sought to determine the frequency of depression and its severity and evaluate the depressive symptoms to figure out whether they had any correlation with the disease. In our study, the overall frequency of mild-to-moderate and severe depression in the active RA group was 30.4% and 1.8%, respectively. These rates in the inactive RA group were lower. In a similar study by Wolfe and Michaud,[9] the cross-sectional prevalence of selfreported depression was estimated to be 15.2%, with an incidence rate of 5.5%. However, in their report, the cumulative risk of self-reported depression in patients with RA reached almost 40% at the nine-year followup.[9] In another study by Zung et al.,[14] the prevalence of clinically significant depressive symptoms was found to be 20.9%. Furthermore, Katz and Yelin[15] found an annualized prevalence of depressive symptoms between 15 and 17%, and the prevalence of clinically significant depressive symptoms in a multiethnic survey by Margaretten et al.[16] was reported as 40%. Although our reported frequency is within the range of previously reported results (13-42%), the appearance of severe depression based on our findings was notably low. However, this low depression rate may be specified as short-term. Thus, for appropriate judgment of the psychological deterioration of RA patients, a long-term follow-up seems to be necessary. Besides, the frequency of depression is directly dependant on socioeconomic and disease characteristics, such as the proportion of females along with the severity and chronicity of illness. Depression associated with RA contributes not only to the heavy burden placed on the patients and their families, but society as a whole is affected since those who suffer from severe depression interact with their families as well as with the general population. These patients may have notable physical disabilities, and a seven-fold increase in depression leads to a 10% reduction in their ability function normally.[17-19] Therefore, by estimating the long-term prevalence of severe depression in RA patients and scheduling beneficial treatment options, such as cognitive behavioral therapy, they are actively encouraged, which results in a decrease in disabilities and more social interaction.

The present data from patients with RA demonstrates a significant positive association between mild-tomoderate depression and inflammatory markers, even after adjusting for clinical and social covariates. In similar studies in other nations, a wide variation in determinants has been reported. In some previous studies, pain extent and fatigue have been identified as the primary dominant causes of RA-related depression.[6] A study by Dirik and Karanci[20] revealed that among the Turkish population, gender, a feeling of helplessness, an inability to cope, and resource loss were significant predictors of anxiety, whereas arthritis self-efficacy and resource loss were significant predictors of depression in RA patients. In a recent study by Godha et al.[21] the severity of RA played a major role in predicting depression, and patients with class III RA were 5.92 times more likely to have a high tendency toward depression compared with class I RA patients, and those with class II RA were 3.78 times more likely. They also showed that advanced age (≥68 years) and low physical activity were other significant negative predictors of depression for this chronic condition. Regarding the association between inflammation and depression, multiple studies have suggested there is a link. Moreover, Howren et al.,[22] Miller et al.[23] and Kojima et al.[24] studied the relationship between CRP levels and depression in a cross-sectional analysis of 218 patients with RA who were recruited from a Japanese academic rheumatology clinic and found a mild but statistically significant positive association between depression index scores and elevated CRP levels. In addition, that study showed that elevated depression scores and CRP levels were independently associated with increased pain scores. Those authors concluded that the severity of depression and inflammation were related, with each having an independent effect on patientreported pain. There are also other studies that have demonstrated decreased inflammation in depressed patients who have been treated with antidepressants, but Howren et al.[22] believe that further studies are needed to confirm this relationship.

In conclusion, it seems that inflammation was effective in predicting the appearance of depression in our RA patient population, and further study of its role with other populations, particularly over the longterm, is recommended.