Patients and methods: Thirty children with HSP (12 boys, 18 girls; mean age 9.0±3.1 years; range 4 to 16 years) and 30 healthy children who were age and gender-matched were enrolled in this study. In addition to the levels of serum immunoglobulins, acute phase reactants, and other biochemical parameters, serum IgA class anti-cardiolipin antibodies (IgA aCL) and IgA class anti-b2- glycoprotein I antibodies (IgA ab2-GPI) were measured. Blood samples from these patients were collected at both the acute and convalescent stages, and the IgA aCL and IgA ab2-GPI antibodies were measured by enzyme-linked immunosorbent assay (ELISA).

Henoch-Schönlein purpura (HSP) is a small vessel vasculitis with multi-organ involvement that includes the skin, gastrointestinal tract, joints, and kidneys with variable clinical expression. With an annual incidence of approximately 14 cases per 100.000 children, HSP is the most frequent vasculitis in childhood. This disease is often self-limiting, although it may lead to long-term renal morbidity.[1,2]

The clinical features are now well recognized; however, there remains uncertainty about the pathogenesis. Henoch-Schönlein purpura is generally believed to be an immune complex-mediated disease characterized by the presence of immune complexes containing polymeric immunoglobulin A1 (pIgA1). Identifying IgA that has been deposited in the vessel wall as well as in the glomerular mesangial area allows for a clear-cut distinction between HSP and other systemic vasculitides or collagen diseases with similar multi-organ involvement.[3]

Antiphospholipid syndrome (APS) is increasingly recognized as the most commonly acquired hypercoagulation state of autoimmune etiology and may occur as an isolated clinical entity (primary APS) or in association with an underlying systemic disease, particularly systemic lupus erythematosus (SLE). Antiphospholipid (aPL) antibodies may play a role in a variety of disorders, including autoimmune, malignant, and infectious diseases other than APS and SLE. These antibodies are a heterogeneous group of immunoglobulins that bind to several anionic phospholipids, such as cardiolipin and phosphatidylserine. In addition, there is growing interest in the IgA class anticardiolipin antibodies (IgA aCL). Most aPL antibodies require a serum cofactor known as β2-glycoprotein I (β2-GPI) for optimal binding.[4,5] Two adult HSP studies have suggested that aPL antibodies are closely related to the pathogenic factors that trigger the development of vasculitis.[6,7] However, the presence and possible role of aPL antibodies in childhood HSP is yet unknown. The aim of this study was to assess the role of these antibodies in the pathogenesis of pediatric HSP.

This study was made between January 2010 and January 2011. The diagnosis of HSP was made according to the European League Against Rheumatism (EULAR) and the Paediatric Rheumatology European Society (PRES) criteria.[3] Thirty children in the acute phase of HSP (12 boys, 18 girls; mean age 9.0±3.1 years; range 4 to 16 years) and 30 healthy children (15 boys, 15 girls; mean age 9.2±3.3 years; range 4 to 16 years) were enrolled in this study, and the participants were matched according to age and gender. None of the patients had been given corticosteroids, immunosuppressants, or vasodilators at the time of serum sampling. Furthermore, no patient demonstrated any evidence of coexisting malignancy, other autoimmune diseases, or viral infections. The control group was recruited from healthy children with no history of hypertension or renal or cardiac diseases and no family history of any nephrologic disease among first-degree relatives.

Blood samples from the HSP patients were collected at both acute and remission (10-12 weeks later) stages. Based on the tests carried out before the study, none of the patients had any other systemic disease. All patients achieved a complete clinical recovery. We did not perform a percutaneous renal biopsy on patients with HSP because there were no indications that it was necessary.

The local research ethics committee approved this study protocol, and written informed consent was obtained from the children over 12 years old and from the parents of all subjects. Our examinations of the patients conformed to good medical and laboratory practices and the recommendations of the Declaration of Helsinki.

Venous blood samples were collected from each patient in standard sterile evacuated blood collection tubes containing either ethylenediaminetetraacetic acid (EDTA) or no additive at all. The plasma or serum samples were prepared after centrifugation at 3000 rpm (1600xg) for 10 minutes and were stored at −70 °C until the assay. All measurements were performed in duplicate, and all plasma or serum samples were analyzed simultaneously using the commercial Abbott C-16000 autoanalyzer kit (Abbott Laboratories, Abbott Park, Illinois, USA). The antibodies IgA aCL and IgA aβ2-GPI were measured by a commercially standardized enzymelinked immunosorbent assay (ELISA) kit (ORGENTEC Diagnostics, Mainz, Germany).

Statistical analysis
All the analyses were performed using the Statistical Package for the Social Sciences (SPSS Inc., Chicago, Illinois, USA) version 17.0 software program for Windows. To compare a continuous variable between the two groups, Student's unpaired t-test and the Mann- Whitney U test were used respectively for variables with normal and skewed distributions. Continuous variables with normal distributions were expressed as mean standard deviation (±SD), and those with skewed distributions were expressed as a median (interquartile range). To compare categorical variables between the two groups, Fisher's exact test was performed. Categorical variables were described as the number of subjects expressed as a percentage in each category. A paired samples t-test was used to determine the differences between the active and remission stages of HSP. The strength of the associations between variables was measured using Spearman's correlation coefficient. A stepwise linear regression analysis was performed to assess the independent predictors of aPL antibodies. A p value of less than 0.05 was considered significant. 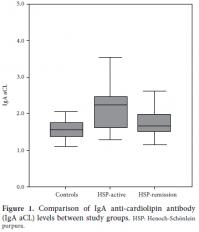 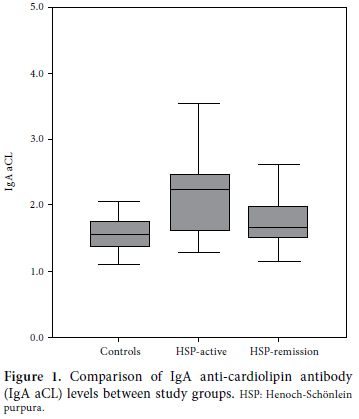 The univariate analysis of factors that correlated with the serum IgA aCl and IgA aβ2-GPI antibodies are shown in Table 3. We found a positive correlation between these two antibodies; however, neither the IgA aCl nor the IgA aβ2-GPI levels were associated with acute phase reactants such as ESR and hs-CRP. In the regression analysis, the mean serum IgA level was the only independent predictor of the increased IgA aCL and IgA aβ2-GPI antibodies (β: 0.549, p=0.002 and β: 0.595, p=0.001, respectively).

Table 3. The factors correlated with the serum IgA aCl and IgA a&#946;2-GPI antibodies in the acute stage of children with Henoch-Schönlein purpura (only significant correlations shown)
× 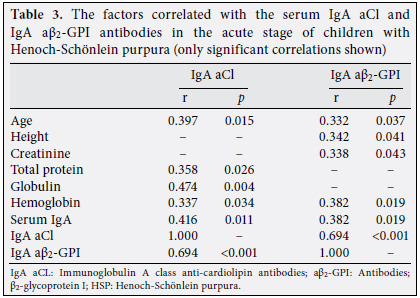 Although HSP is the most common vasculitis in childhood, its etiopathogenesis remains undetermined. Patients with HSP characteristically show prominent deposits of IgA in the vessel wall and the glomerular mesengial area. This finding allows a clear-cut distinction between HSP and other systemic vasculitides or collagen diseases.

In the present study, the ESR, hs-CRP, and IgA levels were elevated at the active phase of the disease, which is similar to what was determined in previous studies.[6-8] The serum IgG and IgM levels of our patients did not differ from those in the controls, but the serum immunoglobulin D (IgD) levels were not measured. The elevation of acute phase reactants reflected the possible nature of the acute inflammatory process, and the increased serum IgA levels showed the immunological effects of HSP. Another study reported a marked increase in IgA-bearing lymphocytes in the peripheral blood during the acute phase of the disease.[9] It is known that IgA complexes may be dissolved by complement and that they may activate the alternative complement pathway.[10]

The main purpose of our study was to determine the aPL antibody levels in children with HSP. Antiphospholipid antibodies occur in a variety of autoimmune, malignant, and infectious diseases, either with or without the thrombotic or obstetric sequelae that characterize the aPL syndrome. Although many studies have focused on the clinical implications of aPL in SLE, few have specifically addressed the questions facing rheumatologists who care for those patients who are concomitantly positive for aPL.[11]

The presence of aPL antibodies does not automatically mean that an individual will suffer from aPL syndrome-related symptoms. These antibodies in children may or may not be associated with another autoimmune disease.[12] The aPL may play a role in a variety of disorders apart from APS, and it has long been recognized that aPL occurs at a high frequency in many disorders other than APS and SLE, especially those known to be immune-mediated such as immune thrombocytopenic purpura, multiple sclerosis, and RA.[13] In addition, it has been reported that the level of IgA aCL is increased in the patients with Behçet's disease and livedoid vasculitis.[14,15]

The antibodies which are directed against phospholipids are a heterogeneous group of immunoglobulins of the IgG, IgM and IgA classes. Among them, great interest has been in the IgA class. We found that the serum IgA aCL and IgA aβ2-GPI antibody levels were significantly higher in the active stage of disease. The IgG and IgM classes of these antibodies were not detected in our patients. Yang et al.[8] similarly demonstrated a significant association between IgA aCL antibodies and childhood HSP during the acute stage. Based on these findings, serum IgA aCL and/or IgA aβ2-GPI antibody levels could serve as a marker for pediatric HSP; therefore, they should be monitored to appropriately gauge disease activity. In addition, elevated antibody levels may imply involvement of immunologic elements in the pathogenesis of HSP.

Similar results have been detected in adult patients with HSP.[6,7] In two studies performed by Kawakami et al.[6,7] serum IgA aCL antibodies were elevated in patients with arthralgia and/or proteinuria versus those without these maladies. They suggested that monitoring serum IgA aCL antibody levels might be useful, especially for predicting renal involvement. In our study, the number of subjects per category, including arthritis/arthralgia, gastrointestinal involvement, and glomerulonephritis, were not enough to make comparisons; therefore, this situation was difficult to fully interpret.

We successfully identified the factors associated with the increased aPL antibodies in our patients. There was a significant positive correlation between the serum IgA aCl and IgA aβ2-GPI antibodies, and this was actually an expected result. One serum protein, β2-GPI, had a high affinity for anionic phospholipids, a requirement for binding IgA aCL to cardiolipins in autoimmune disease. Similar correlations were also seen between these two antibodies and age, height, serum creatinine, total protein, globulin, hemoglobin, and IgA levels. In regression analysis, we identified that the mean serum IgA level was the only independent predictor for the increased IgA aCL and IgA aβ2-GPI antibodies. This is one of the most important results of our study. Yang et al.[8] similarly demonstrated a significant association between IgA aCL and childhood HSP during the acute stage.

A crucial question is whether elevated IgA aCL and IgA aβ2-GPI antibodies are acute phase reactants. In our study, these antibodies were not associated with ESR and hs-CRP. However, Kawakami et al.[6] found a significant correlation between serum IgA aCL antibodies and CRP in adult patients with HSP. To prove this, additional research and comparisons should be made, but these results should be comparable with the diseased controls, such as other inflammatory diseases. Additionally, the IgG class antibodies against phospholipids should be measured to determine if they are specific for HSP.

In conclusions, we found high titers of serum IgA aCL and IgA aβ2-GPI antibodies in pediatric HSP patients, and there was a significant association between these two markers. Both antibodies decreased significantly during the remission stage. Therefore, their detection may be valuable in the monitoring of disease activity. We also found a significant positive correlation between these antibodies and the serum IgA level. These findings suggest that IgA abnormalities are closely related to the pathogenic factors that trigger the development of HSP. However, further studies are required to confirm the pathogenesis of HSP.