An Assessment of Flow-Mediated Dilatation in Behçet's Disease

Objectives: This study aims to evaluate the early development of atherosclerosis in patients with Behçet's disease (BD) using flow-mediated dilatation (FMD) method under Doppler ultrasonography (US).

Patients and methods: Thirty patients with BD and 25 healthy volunteers were included. Doppler US was used to measure the basal and post-reactive hyperemic diameters, peak systolic velocities, resistivity indices, and blood flow volumes of the brachial arteries. Flowmediated dilatation was defined as the percentage of difference between the post-reactive hyperemic and basal diameters.

Results: The mean FMD value of the BD group (10.8±12.7%) was significantly lower compared to the control group (26±18.6%). No statistically significant difference in other parameters was found between the groups.

Conclusion: Flow-mediated dilatation under Doppler US is simple and effective non-invasive method for predicting the early development of atherosclerosis in patients with BD.

Behçet's disease (BD) is a multisystem, inflammatory vasculitic disorder, characterized by oral and genital ulcers, ocular and mucocutaneous lesions, gastrointesinal and central nervous system lesions, and arthritis. In addition, vascular lesions have been reported in about 25% of the patients. This disease affects arteries and veins of all sizes. The types of vascular involvement include superficial thrombophlebitis, deep venous and arterial thrombosis, and arterial aneurysm formation.[1,2]

Systemic inflammatory rheumatic diseases are associated with an increased risk of cardiovascular diseases.[3-6] Atherosclerosis is widely accepted as a low-grade chronic inflammatory disorder,[3,7] and previous studies have reported a predisposition to its development in BD.[8-10] By the time clinical findings of atherosclerosis appear, the disease is at an advanced stage, and treatment is palliative.[11] Endothelial cell dysfunction (ECD) is an important marker of atherosclerosis, and it also plays an important role in the development of vascular involvement in BD.[12,13] When systemic involvement of atherosclerosis is considered, the assessment of the peripheric arteries using a non-invasive method such as flow-mediated dilatation (FMD) provides accurate information, and this method is now used for the evaluation of ECD of the brachial artery with Doppler ultrasonography (US).

We aimed to report the results of FMD assessed by Doppler US in patients with BD, which could prove to be helpful in predicting atherosclerosis.

The study group consisted of 30 patients with BD who were monitored at the Departments of the Dermatology and Urology at Gaziosmapasa University Hospital. The patients had been diagnosed with BD at our clinics and other hospitals. All of the patients fulfilled the criteria of the International Study Group for BD.[14] The control group included 25 healthy volunteers who were recruited from the hospital staff. Atherosclerotic risk factors including hypertension, hypercholesterolemia, smoking, diabetes mellitus (DM), and relevant family history were recorded. In the study group, patients were questioned regarding the clinical characteristics, duration of illness, and medical treatments received at the time of the examination and during the previous month (Table 1). Patients with BD were divided into two subgroups according to the median duration of the disease and disease activity state (active and inactive). At the time of examination, patients were included in the active group if they had at least two of the following clinical criteria: oral ulcers, genital ulcers, ocular involvement, arthralgia, or vascular complications.[15] 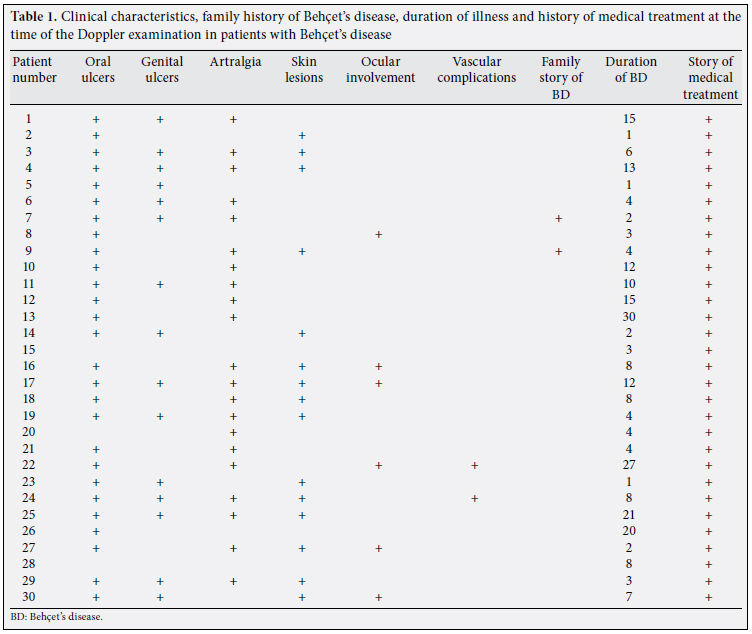 The local ethics committee of our hospital approved the study, and all participants gave their written informed consent prior to the investigation.

Each participant's blood pressure was measured with a mercury sphygmomanometer, the heights and weights were recorded, and the body mass index (BMI) values were calculated. The data concerning the most recent blood total cholesterol, high- (HDL), and low-density (LDL) lipoprotein cholesterol levels, and triglyceride measurements were retrieved from the hospital files.

The mean FMDs of the brachial artery of both groups were assessed by a non-invasive method previously used by Brinkworth and et al.[16] in their study. Doppler US examinations were performed with a 10 mHz linear array transducer and a Logiq 9 US system (GE Medical Systems, Milwaukee, Wisconsin, USA). The measurements were taken in the morning after a fasting period of between eight and 12 hours. Afterwards, the patients took a rest in a supine position for 20 minutes in a quiet and temperature controlled (22-23°C) room where they were not allowed to smoke or use alcohol or caffeine. Then the basal systolic blood pressures of the groups were measured, and the parameters of the brachial artery were assessed from the left forearm 3-4 cm above the antecubital fossa while the patients were still in the supine position. Both the anterior and posterior walls of the brachial arteries were observed, and the basal diameters, peak systolic velocities, resistivity indices, and blood flow volumes of the brachial arteries were measured. In order to induce stagnation of blood flow within the brachial artery and subsequent ischemia, the sphygmomanometer was inflated to a systolic pressure of 250 mmHg for five minutes. Finally, the cuff was rapidly deflated to induce a reactive hyperemia, and the above-mentioned values were recorded within one minute. All measurements were taken from the greatest diameter of the brachial artery. The FMD was determined as the percentage difference between the post-reactive hyperemic and basal diameters of the brachial artery. It is calculated by using following equation:

The mean systolic and diastolic blood pressures, BMI, and blood total cholesterol as well as the HDL and LDL cholesterol levels, triglyceride measurements, and FMD values were compared between the two groups. The mean FMD values were also compared between the subgroups of the patients with BD with the median duration of illness and disease activity state (active and inactive) taken into consideration.

Continuous data was expressed as the mean ± standard deviation (SD), and categorical data was given as numbers with related percentages (n, %). Differences in continuous data were analyzed using Student's t-test, and a chi-square test was used to compare categorical data. A two-tailed p-value of <0.05 was considered statistically significant. All statistical analyses were performed using the SPSS version 11.0 software program (SPSS Inc., Chicago, Illinois, USA).

The control subjects and patients with BD were comparable in terms of age (35±10 versus 38±11, respectively; p=0.35) and gender (15 males and 10 females versus 16 males, and 14 females, respectively; p=0.785). No statistical differences were seen in the atherosclerotic risk factors between the two groups (Table 2).

Table 2. Demographic and baseline characteristics of the study groups
×

All patients were under medical treatment at the time of the Doppler US examination (Table 1). The mean duration of illness in the BD group was 8.6±7.7 years. The groups demonstrated no statistically significant differences in terms of blood pressure, BMI values, blood total cholesterol, HDL and LDL cholesterol levels, or triglyceride measurements (Table 3). Twentyfive patients with BD were in the active subgroup (15 males, 10 females; mean age 39±12 years; range 15 to 59 years), and five patients were in the inactive subgroup (1 male, 4 females; mean age 35±7 years; range 23 to 43 years). The mean FMD value of the BD group (10.8±12.7%) was lower than the control group (26±18.6%), which was statistically significant (p=0.01). The other measurements did not differ between the both groups (Table 4). There was also no statistical difference in the FMD values between the subgroups of BD patients with respect to the duration of the illness. The FMD values of the active and inactive BD subgroups were 10.83±12.62% and 10.85±14.90%, respectively.

There are known associations between atherosclerosis and chronic inflammatory diseases such as rheumatoid arthritis (RA) and systemic lupus erythematosus (SLE).[3-6,17-19] Previous studies have reported a predisposition toward the development of atherosclerosis in BD,[8-10] and in these disease states, hardening of the arteries generally occurs at a younger age.[3-6]

Many changes occur in the arterial wall before the clinical findings of atherosclerotic diseases become evident. In the early subclinical stages, intima media thickness (IMT) and ECD are important markers of atherosclerosis.[20] Endothelial cell dysfunction is widely accepted as an initial lesion in atherogenesis[4] and can be reversed with effective treatment.[11] It is known that cardiovascular risk factors such as smoking, hypertension, hyperlipidemia, DM, and obesity can cause ECD before the clinical findings of atherosclerosis are manifested.[11] Many authors have proven that inflammation is also an independent risk factor for this disease.[3-7,17-19] Indeed, ECD can be demonstrated in more than one vascular bed, and this is related to focal inflammation. Suppression of the immune inflammatory process may result in the reversal of ECD.[4] Flow-mediated dilatation is a noninvasive method used for the evaluation of ECD of the brachial artery with Doppler US.

This study revealed that FMD values decreased in BD when compared with age- and gender-matched healthy controls. The FMD values predict atherosclerosis in the subclinical period of BD. The patient and the control groups were comparable regarding gender, age, blood pressure, lipid profile, family medical history, and smoking status. Therefore, our findings of decreased FMD values cannot be associated with traditional atherosclerotic risk factors and can be attributed to the inflammatory nature of BD.

Oflaz et al.[9] reported decreased FMD values in BD compared with healthy individuals in a study consisting of 50 BD patients. The mean FMD values that they found were 10.41±3.85% in BD patients and 14.41±3.39% in the healthy control group. They also compared the FMD values of BD patients with and without vascular involvement and definitively found more prominent ECD in patients with vascular involvement. Ulusoy et al.[25] reported decreased FMD values in 28 BD patients. The FMD values in the BD and the control groups were 15.7±2.4% and 21.4±6.4%, respectively. The mean FMD value in our BD group (10.8±12.7%) was also similar to those obtained in the previously mentioned studies. However, our mean FMD value (26±18.6%) in the control group was higher when compared with the referenced control groups. In a study performed by Chambers et al.[21] with 19 BD patients and 21 healthy controls, the mean FMD values were quite different (0.7±0.9% in the patient group and 5.7±0.9% in the control group) from those cited in the literature. Ulusoy et al.[25] enrolled the youngest and Chambers et al.[21] the oldest groups of patients in their studies. Unlike our study with an almost balanced male/female ratio (53/47%), the study groups of Oflaz et al.[9] and Ulusoy et al.[25] consisted mainly of male participants (82% and 86%, respectively).

We found no correlation between the duration of the illness and FMD values. This condition might be explained by the fact that all patients were undergoing medical treatment at the time of the Doppler US examination.

In conclusion, measuring the brachial artery FMD with Doppler US is a simple and noninvasive method for the prediction of the early development of atherosclerosis in patients with BD. Using this noninvasive method, cardiovascular problems may be predicted and preventive measures can be taken earlier in the subclinical stage of the disease.