Objectives: This study aims to assess the carotid intimamedia thickness (IMT) and plaque formation in patients with Behçet's disease (BD) by Doppler ultrasonography (US) and to correlate it with disease activity, and clinical and laboratory parameters.

Patients and methods: Thirty BD patients (25 males and 5 females; mean age 35.8±8.7 years; 22 to 54 years) diagnosed according to the new set of diagnostic criteria published by the International Study Group for Behçet's Disease, were recruited from the Rheumatology Department, Cairo University Hospitals. The mean disease duration was 8.7±5.9 years. Subjects with diabetes mellitus, hypertension or evidence of myocardial infarction were excluded. Full history taking, clinical examination and skin pathergy test were carried out for all patients. Laboratory measurements including lipid profile were also performed for both patients and controls. Disease activity was assessed using the Behçet's Disease Current Activity Form (BDCAF). Carotid artery ultrasonography was carried out.

Conclusion: A morphologic evidence of subclinical atherosclerosis in patients with BD is verified. Renal function in these patients may indicate possible risks and BDCAF score may significantly suggest cardiovascular involvement.

Behçet᾽s disease (BD) is a chronic, relapsing, multisystemic vasculitis that can involve almost every organ and system in the body and has extremely diverse manifestations.[1] Patients with Behçet᾽s disease who have major vessel involvement have a poor prognosis.[2] Large vessel involvement is more common in the venous system.[3] Arterial involvement is rarely described in BD, but the outcome is usually not good.[4] All types and sizes of blood vessels can be affected with this disease. A pathogenetic mechanism is suggested, yet its etiology remains unknown.[5-7]

Doppler ultrasonography (US) may show carotid intima-media thickness (IMT) associated with atherosclerosis in BD which may partially explain the cardiovascular morbidity and mortality seen in these patients.[8] In addition, carotid artery aneurysms in patients with BD patients have been reported.[9] The use of noninvasive parameters such as IMT may be useful in defining disease progression and identifying BD subjects at high risk.[10] The data from patients with active BD may be compatible with the serum lipid profile, which is accepted as a risk for the development of atherothrombosis.[11] Dyslipidemia, especially in the form of hypertriglyceridemia, might be a risk factor and has proven to be the best marker for the occurrence of thrombosis in patients with BD.[12]

The aim of the present study was to assess the plaque formation and carotid IMT in patients with BD via Doppler US and to correlate this information with clinical and laboratory features along with disease activity.

This case control study included 30 patients (25 males and 5 females) suffering from BD who satisfied the new set of diagnostic criteria published by the International Study Group for Behçet᾽s Disease.[13] The patients were recruited from the Rheumatology and Rehabilitation Department of the Cairo University hospitals. Twenty healthy volunteers who were matched according to age and gender served as the control group. Six patients and two controls who exhibited diabetes mellitus, hypertension, or evidence of myocardial infarction were excluded from the study. A clinical examination to obtain the patients᾽ medical histories was performed, and a skin pathergy test, which included a lipid profile, was carried out for all participants in the study. Patient medications were evaluated, and those receiving corticosteroids for management of their disease were not excluded. Disease activity was assessed using the Behçet᾽s Disease Current Activity Form (BDCAF) score.[14] A US scan was performed on the patient and control groups in the Radiodiagnosis Department of Cairo University. The IMT measurements on each side were taken at the common carotid artery (CCA) (10 mm before and 5-10 mm cranially to the start of the bulb) and the internal carotid artery 10 mm after the flow divider. For each patient, the highest IMT among the measured segments studied on each side was recorded, and the mean value was calculated. According to current sonographic criteria, the IMT was considered “normal” when it was less than 0.9 mm and “thickened” when it was equal to or more than 0.9 mm. When the thickness was more than 1.3 mm, it indicated atherosclerotic plaque.[15] All of the procedures were approved by the local ethics committee.

Statistical analysis
The Statistical Package for Social Science (SPSS Inc., Chicago, Illinois, USA) program version 15.0 for Windows was used for data analysis. Data was presented as mean ± standard deviation (SD). The Mann-Whitney U-test was used for a comparison analysis of two non-parametric quantitative variables and presented as the median (minimum-maximum). Spearman᾽s correlation coefficient was used for detection of the relationship between two non-parametric variables. A p value of <0.05 was considered to be significant.

Table 1. Clinical manifestations of the patients with Behçet&#8217;s disease
× 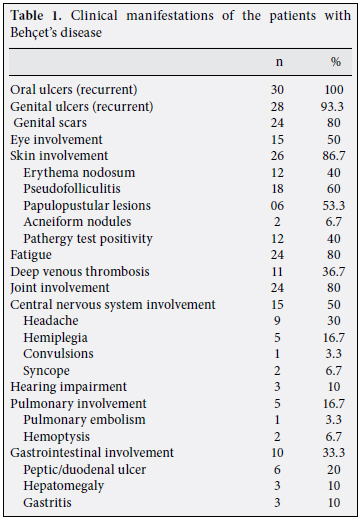 Table 2. Laboratory findings in the Behçet&#8217;s disease patients and controls
× 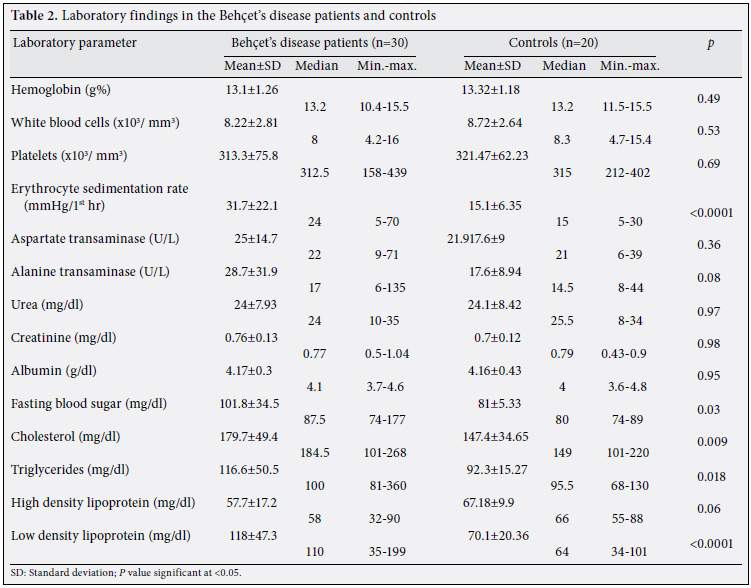 Twenty-five of the patients (83.33%) were being prescribed corticosteroids (12.2±8.3 mg/day) and colchicine (0.9±0.5 mg/day) for the disease. Azathioprine was being used by 12 patients (30%), and 10 were taking oral anticoagulants (warfarin). Three patients were being prescribed cyclophosphamide and one was taking chlorambucil. There was no significant correlation between the amount of corticosteroids or colchicine being used and the IMT of the carotid artery. However, the steroids had a significant positive correlation with the level of low density lipoprotein (LDL) (p=0.03).

The mean IMT of both the right and left CCA in the BD patients was 0.72±0.4 mm (median 0.6; 0.4-1.8 mm). The carotid IMT was >0.9 mm with atherosclerotic plaque in five patients (16.7%) while no plaque was present in the control group. There were four males (two had autoimmune hepatitis) and one female who tested positive for the hepatitis C virus (HCV) who had hepatomegaly. The US findings in these three patients (with hepatitis) showed focal homogenous echogenic plaque resting on the anterior wall of the common carotid bulb that measured 5x1.8 mm at its maximum dimension in one of the males. The others showed diffuse atherosclerosis of the extracranial carotids. Diffuse IMT of the left CCA with localized plaque on the posterior wall with a lumen reduction of 20% was present in the female. The IMT of the patients with BD was significantly different from what was seen in the control subjects (0.4±0.1 mm) (median 0.4; 0.21-0.6 mm) (p=0.003). Figure 1 shows the US image for increased IMT in one of the patients, and there was no significant difference between smokers and nonsmokers. Furthermore, there was no significant correlation between IMT and BMI. 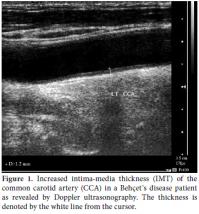 Figure 1. Increased intima-media thickness (IMT) of the common carotid artery (CCA) in a Behçet&#8125;s disease patient as revealed by Doppler ultrasonography. The thickness is denoted by the white line from the cursor.
× 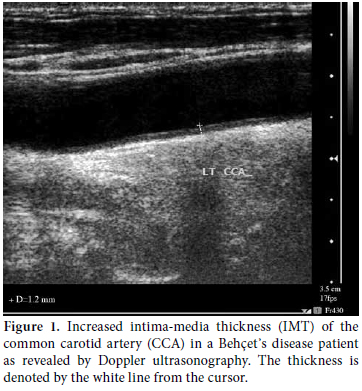 There was Figure 1: Increased intima-media thickness (IMT) of the common carotid artery (CCA) in a Behçet᾽s disease patient as revealed by Doppler ultrasonography. The thickness is denoted by the white line from the cursor.a significant correlation between IMT and the urea and creatinine (r=0.54, p=0.002 and r=0.42, p=0.02, respectively). It also had a significant positive correlation with cholesterol (r=0.32, p=0.04) and triglycerides (r=0.51, p=0.002), but a negative correlation existed with the high density lipoprotein (HDL) level (r=-0.53, p=0.01). There was a significant correlation between the BDCAF and IMT in BD patients (r=0.42, p=0.02). When comparing the IMT these patients with regard to the presence and absence of arthritis along with the involvement of the central nervous system (CNS) or ocular, there was no significant difference.

Behçet᾽s disease is a systemic disorder associated with characteristic vasculitis that can involve veins and arteries of all sizes. Endothelial dysfunction is a characteristic feature of BD and is widely regarded as being the initial lesion in the development of atherosclerosis. The carotid artery IMT is a widely accepted marker of subclinical atherosclerosis.[2]

Subclinical increased IMT: In the present study, IMT was significantly increased in the patients with BD. Similarly, it was notably higher in these patients when compared with the controls. This occurred despite there being no significant cardiovascular involvement.[2,15] Endothelial dysfunction occurs before visible structural changes of the arterial wall[7] and represents a key event in subclinical atherosclerosis in BD.[16] Our study showed that IMT increases in patients with hepatitis. The development of atherosclerosis has an inflammatory component; however, it is not clear whether hepatitis B and C viral infections are associated with the risk of atherosclerosis.[17] This result is in agreement with the study of Van Himbergen et al.[18] who found that smoking was not associated with IMT in the population at large, but it was related to those patients with high levels of LDL. It has been suggested that smoking is associated with subclinical atherosclerosis in diabetics and that it interacts with the duration of diabetes to accentuate atherosclerosis.[19] However, none of the patients included in our study were diabetic. In addition, there was no association between the carotid IMT and BMI. This was in accordance with the results of another study that also found no connection.[20] In contrast, other studies actually found a significant correlation between IMT and BMI.[21,22]

Regarding the medications: There was no significant correlation between corticosteroid or colchicine usage and IMT; however, there was a significant correlation between steroid usage and the level of LDL. This supports the findings of Hafström et al.[23] who reported that IMT did not differ between patients treated with prednisolone and those who were not.

Regarding the correlation of IMT and laboratory investigations: Our results showed a significant correlation between IMT and urea and creatinine levels. In the study by Skalska et al.,[24] an association between renal function and carotid IMT was reported. An increase in carotid IMT can predict future vascular events in the general population. However, the relationship between IMT and chronic kidney disease showed that the glomerular filtration rate and urinary albumin-creatinine ratio significantly correlated with IMT, but this was not true after making adjustments for traditional cardiovascular disease risk factors.[25] Again, IMT was associated with elevated creatinine, and the urea level was independently associated with medial thickness and considered to be an independent predictor of IMT of the CCA.[20,26] In this study, IMT had a significant positive correlation with cholesterol and triglycerides but a negative one with HDL level. This is in agreement with the findings in other studies.[27-31]

Regarding the disease activity: In our patients, there was a significant correlation between IMT and the BDCAF scores. There was also indirect evidence to suggest that low protein S activity, a risk factor for the thrombotic disorder in BD, also correlated with the same scores.[32] Also, lipoprotein (a), with the potential for atherogenic and thrombogenic activities in BD, fluctuates with the disease activity;[33] therefore, active BD patients may be more susceptible to atherogenic events.[34] A positive correlation was detected between the BDCAF and markers of vascular involvement.[35]

In the present study, the BDCAF had a significant negative correlation with the platelet count. In the study by Akar, et al.,[36] there was evidence of platelet hyperreactivity in patients with BD which may contribute to a prothrombotic state. Another study reported that the platelet level did not seem to be related to clinical activity.[37]

It can be concluded that there is morphological evidence of subclinical atherosclerosis in BD patients. Intima-media thickness was associated with urea and creatinine indicating that renal function forms a possible risk of CVD in BD. The BDCAF is an easy tool that may significantly reflect the cardiovascular involvement in patients with BD. It is recommended that further studies on a larger number of patients be conducted to confirm our results and show the prevalence of subclinical atherosclerosis in BD patients.