Objectives: We assessed the prevalence of anemia at the initiation time of anti-tumor necrosis factor (anti-TNF) therapy and the change of hemoglobin level following anti-TNF therapy in ankylosing spondylitis (AS).

Anemia of chronic disease (ACD), also known as anemia of inflammation, is a hypoproliferative anemia that develops in response to systemic illness or inflammation such as infection, cancer, and autoimmune conditions.[1] Although ACD is the second most prevalent type of anemia after that caused by iron deficiency, it is the most common among patients with chronic illness.[2] However, precise estimates of prevalence are difficult to determine because many patients with anemia are not investigated sufficiently to establish the cause.[3]

Anemia is the most frequent extra-articular manifestation of rheumatoid arthritis (RA) and is estimated to occur in 30% to 60% of patients.[4,5] Of the group classified as anemic, 77% were found to have ACD and 23% to have iron deficiency anemia (IDA).[6] Rheumatoid arthritis patients with anemia have evidence of more severe disease, with more involved joints and higher levels of functional disability and pain.[6,7] Moreover, anemia usually causes symptoms and signs like fatigue, impaired cognitive function, anorexia, exertional dyspnea, and loss of libido when the oxygen carrying capacity of the blood is unable to meet the oxygen requirements of body tissues. Therefore, it is generally accepted that the symptoms of anemia adversely affect quality of life, even when it is a mild form.[7,8]

Ankylosing spondylitis (AS) is a chronic, progressive disease characterized by inflammation of entheses, leading to new bone formation, syndesmophytes, and ankylosis of joints, primarily in the axial skeleton.[9] Patients with AS often have associated peripheral arthritis, enthesitis, osteoporosis, or extraarticular involvement such as uveitis, psoriasis, or inflammatory bowel disease.[10] Anemia can also occur in AS patients and significantly affect a patient’s quality of life. However, the exact prevalence and incidence of anemia in patients with AS remains unknown, and the clinical significance has so far not been assessed.

Tumor necrosis factor-alpha (TNF-α), one of the proinflammatory cytokines, plays a major role in the pathogenesis of ACD through its inhibitory effects on erythropoiesis and iron release from the reticuloendothelial system.[1] It also is implicated in the pathogenesis of AS.[11] Therefore, we investigated the prevalence of anemia at the initiation of anti-TNF therapy and the changes in hemoglobin levels with anti-TNF therapy in AS according to types of anemia.

Patients
A total of 43 patients with AS who were diagnosed between 2002 to 2007 at Yeouido St. Mary’s Hospital, The Catholic University of Korea were included in this study and examined in a retrospective manner. All patients were over 20 years of age, fulfilled the modified New York criteria for the diagnosis of AS,[12] and fulfilled the criteria for anti-TNF-α treatment according to the Assessments in Ankylosing Spondylitis (ASAS) consensus statement.[13] All patients were treated initially with non-steroidal anti-inflammatory drugs (NSAIDs) and/or disease-modifying antirheumatic drugs (DMARDs), such as sulfasalazine (SSZ) and methotrexate (MTX), for at least three months and showed good response to this conventional therapy. After a period of time (24.0±19.7 months), the disease was activated again [using a Bath Ankylosing Spondylitis Disease Activity Index (BASDAI) score ≥4], and anti-TNF therapy was begun. The study outline is illustrated in Figure 1. Excluded were patients with the concomitant presence of inflammatory bowel disease, chronic renal or hepatic disease, diabetes mellitus, hematologic diseases, thyroid diseases, malnutrition, or a drug intake which affected erythropoiesis (alkylating agents, sulfonamides, or anticonvulsants). Patients who showed evidence of malnutrition, gastrointestinal bleeding, or acute infection based on the medical records were also excluded. The study was approved by the Institutional Review Board, Clinical Research Coordinating Center of the Catholic Medical Center and was conducted in accordance with the Declaration of Helsinki.

Clinical and laboratory analysis
Complete medical records and laboratory tests were thoroughly reviewed. The hemoglobin levels, erythrocyte sedimentation rates (ESR), C-reactive protein (CRP), ferritin, and BASDAI were evaluated at baseline and week 32 of the anti-TNF therapy. Anemia was defined using the World Health Organization criteria of a hemoglobin level less than 12 gm/dl for women and 13 gm/dl for men.[14] On the basis of previously reported data, serum ferritin equal to or higher than 60 ng/ml indicated ACD, whereas ferritin below 60 ng/ml indicated IDA.[15,16]

Statistics
The results were presented as mean ± standard deviation for continuous data and as a percentage for categorical data. Comparisons of the numerical data between groups were performed by the Student’s t-test or Mann-Whitney U-test. Pearson's correlation coefficients were used, when appropriate, to analyze the relationship between the ESR, CRP and hemoglobin. A multiple linear regression model that included age, sex, disease duration, type of anti-TNF agents, and changes in the ESR, CRP and BASDAI scores was used to evaluate the independent effect of clinical and laboratory variables on the improvement in hemoglobin levels. P values less than 0.05 were considered statistically significant.

Baseline characteristics
The baseline demographics and disease characteristics of the AS patients in our study are shown in Table 1. The mean age of the population was 37.3±7.9 years, and the mean disease duration was 5.1±3.4 years. All patients were treated initially with NSAIDs and/or DMARDs for a mean of 31.9±20.0 months before the beginning of anti-TNF therapy and showed positive responses to this conventional therapy. Anti-TNF therapy was determined when reactivation of the disease activity (by BASDAI score ≥4) was verified. Administration of NSAIDs was maintained for all of the patients except two because these showed poor adherence to oral medication. 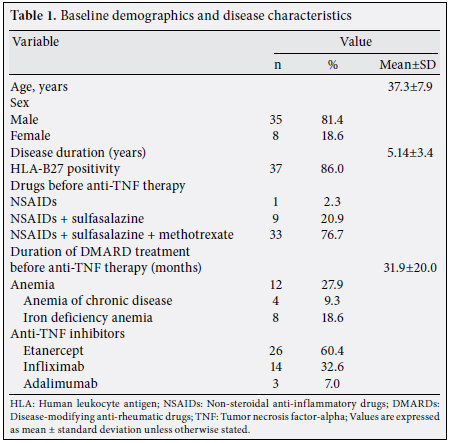 Effects of anti-TNF therapy on hemoglobin level and clinical assessments at week 32
Patients who received anti-TNF agents demonstrated statistically significant reductions in their ESR, CRP and BASDAI scores at week 32 when compared with the baseline. The mean hemoglobin levels also significantly improved from 13.8 to 14.3 gm/dl (p=0.001) (Table 2).

Table 2. Clinical and laboratory response to anti-TNF therapy at week 32
×

Table 3. Association between clinical and laboratory variables and differences in hemoglobin
×

Figure 2. The relationship between the differences in the erythrocyte sedimentation rates (ESR) and C-reactive protein (CRP) along with the differences in hemoglobin levels in ankylosing spondylitis patients receiving anti-tumor necrosis factor therapy.
× 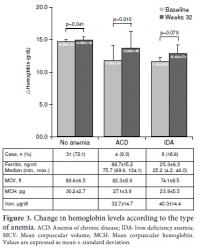 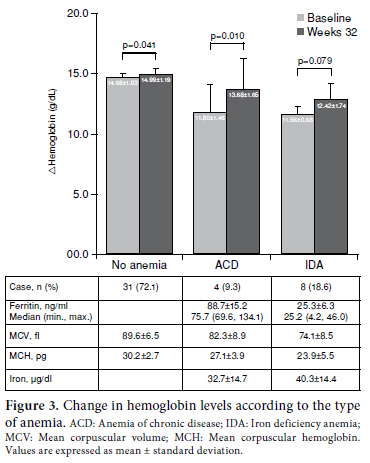 Hemoglobin concentration was corrected in only one patient with an IDA pattern in that assessment period.

Anemia of chronic disease is the second most prevalent form after that caused by iron deficiency and develops as a result of acute or a chronic activation of immune response.[1] Anemia of chronic disease is a significant part of anemia in chronic inflammatory conditions like infection, cancer, and autoimmune diseases.[1] However, even though AS is a chronic inflammatory disease, the prevalence and incidence of anemia in AS have not been thoroughly studied. This is probably because AS develops mainly in young men, so mild anemia is often disregarded and not investigated sufficiently to establish the cause. Because TNF-α, the predominant proinflammatory cytokine, is central to the pathogenesis of AS[11] and also plays a major role in the pathogenesis of ACD,[1] this disease could be one of the clinical manifestations of the pathophysiological results in AS.

The first comprehensive study on anemia in patients with AS was reported in 2009 by Braun et al.[17]

We found that improvement in hemoglobin levels was significantly associated with decreases in the ESR and CRP, and this was independent of improvement in disease activity (BASDAI score). The higher levels in hemoglobin showed a positive correlation with the lower levels of the ESR and CRP, which is consistent with previous observations.[5] Tumor necrosis factoralpha induces the production of IL-6 from the inflammatory cells, and these two together stimulate the production of most acute-phase proteins, such as CRP, serum amyloid A, and fibrinogen as well as hepcidin from hepatocytes. Fibrinogen, the most abundant acute-phase protein, has the greatest effect on the elevation of the ESR.[1,18-20] Moreover, in anemia, with the hematocrit reduced, the velocity of the upward flow of plasma is altered so that red blood cell aggregates fall faster, leading to elevation of the ESR.[21] Therefore relationship between the ESR, CRP, and hemoglobin levels is a clinical mirror of the pathophysiological dynamics between inflammation and anemia.

All patients enrolled in this study were treated with NSAIDs and/or DMARDs such as sulfasalazine and/or MTX before the anti-TNF therapy for a certain period of time and exhibited clinical and laboratory improvement. Although the hemoglobin levels improved in both the DMARD and anti-TNF therapy in patients with ACD, the results of the anti-TNF therapy were superior to those of the DMARD therapy. Similar findings were also observed in clinical studies of patients with RA being treated with infliximab.[22] This suggests that TNF-α is the more direct factor involved in the development of ACD in AS. In the research of ACD in RA, the administration of a TNF-α blockade led to an increase in hemoglobin levels which were independent of erythropoietin production.[23] Rheumatoid arthritis patients exhibited low frequency and increased apoptosis of the bone marrow erythroid progenitor and precursor cells due to increased local production of TNF-α.[16] Additionally, in the patients with RA, the serum hepcidin levels were positively correlated with disease activity but inversely correlated with hemoglobin levels.[24] Therefore, it is thought that anti-TNF therapy dampers TNF-α-induced accelerated apoptosis of bone marrow erythroid cells and hepcidin production, which in turn contributes to the pathogenesis of ACD in AS as well as in RA.

Most patients included in this study were taking NSAIDs, and this was maintained throughout the duration of the anti-TNF therapy. This is probably because NSAIDs are the only drugs currently known to reduce radiographic progression in symptomatic patients with AS.[25] Disease-modifying anti-rheumatic drugs potentially can cause gastrointestinal bleeding, but only one case developed a duodenal ulcer in a randomized trial of 215 AS patients,[25] and no remarkable evidence of bleeding was observed in this retrospective study. Five patients with IDA observed in this study were fertile females, and the cause of IDA was considered to be attributable to menstruation. However, the possibility of subclinical mucosal injury and hemorrhage in patients taking NSAIDs could not be excluded.[26] It has now been proven that MTX is not effective for the axial manifestation in AS, but it was commonly prescribed prior to the introduction of anti-TNF agents.[27] There has been no report regarding such adverse effects as bone marrow suppression and gastrointestinal injury in clinical studies for the efficacy of MTX in AS.[28-30] Moreover, the addition of MTX to infliximab did not provide additional benefits to AS treatment and was just as safe and effective as infliximab monotherapy.[30] Therefore, MTX might not have an essential effect on the pathobiology of AS.

In general, anemia is not considered to be a major problem in AS by the vast majority of physicians. This statement is based on the fact that studies on anemia in AS are sparse. This study had some limitations with regard to small sample size and insufficient data on anemia. Nevertheless, the results presented here demonstrate that anemia is not uncommon in AS patients, especially in those with increased disease or inflammatory activity. Our study also showed the potential effects of anti-TNF therapy on the pathophysiology of ACD in these patients. Improvement in hemoglobin levels would be an interesting and beneficial secondary benefit for patients who are candidates for anti-TNF therapy. Further larger and prospective studies will undoubtedly contribute to our understanding of the pathogenesis of AS-associated anemia and possibly reveal more about the role of the TNF-α blockade.