The term “paraneoplastic syndromes” refers to symptoms caused by a malignancy but which are not directly related to the tumor mass nor its metastasis. These kinds of symptoms are present in approximately 10% of all cancer cases at the time of diagnosis. Approximately 50% of cancer patients experience paraneoplastic symptoms at least once during their disease. Although the majority of these are endocrine in nature, hematological, rheumatic, and neurological symptoms are also seen.[1]

This review focuses on paraneoplastic rheumatic disorders (RDs). This involves the non-metastatic distant effects of tumors on the musculoskeletal system. The main distinguishing feature between paraneoplastic RD and tumors associated with RDs is that the rheumatic symptoms in the former are decreased or abolished by excision or radical treatment of the tumor. The majority of paraneoplastic RDs precede the onset of the malignancy by months or even years. Although some types of paraneoplastic RDs are very rarely reported in the literature, we believe that this number should be higher. Unfortunately, a lack of knowledge about this condition causes delays in diagnosis and loss of very precious time.

PATHOGENESIS
Decreasing paraneoplastic RD symptoms in line with the primary tumor treatment can provide an idea about the pathogenesis. There are three proposed hypotheses:[2]

b) Paraneoplastic RD is caused by toxins produced by the tumor cells, which trigger inflammation.

c) Paraneoplastic RD is mediated by hypersensitivity reaction, which develops against intracellular antigens secreted by apoptotic cancer cells. The presence of autoantibodies against nuclear proteins and doublestranded deoxyribonucleic acid (ds-DNA) in the serum of people with paraneoplastic RD is used as evidence for this suggestion.[3]

CLASSIFICATION
It was first reported in 1916 that a rheumatic disease could herald a malignancy.[4] Many paraneoplastic RDs have been defined since that time (Table 1). 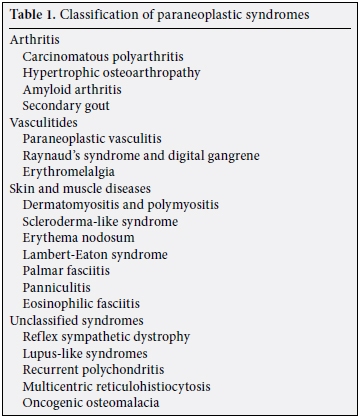 ARTHRITIS
Carcinomatous Polyarthritis (Rheumatoid Arthritis-Like)
Carcinomatous polyarthritis is a seronegative inflammatory arthritis and may be the first sign of an existent malignancy. Although the pathogenesis of synovitis is not clearly known, possible pathogenic factors include immune mechanisms such as hormones, cytokines, peptides, antibodies and cytotoxic lymphocytes.[5]

Carcinomatous polyarthritis has been associated with breast, lung, colon, ovarian, gastric, and oropharynx cancer as well as esophageal tumors and lymphoproliferative diseases.[2,6,7] Usually the symptoms appear eight to 12 months before the development of tumor disease.[2] It differs from rheumatoid arthritis (RA) due to the initiation at advanced age, acute onset, predominantly asymmetrical lower extremity involvement, and sparing of wrist and hand joints. Also, unlike RA, the absence of erosions, deformities, rheumatoid factor, rheumatoid nodules, and family history is observed.[8] Furthermore, joint radiographs tend to be normal. If a patient with such symptoms also has disproportional pain, severe weight loss, hepatosplenomegaly, lymphadenomegaly, inadequate response to steroids, or disease-modifying drugs, then further investigation regarding malignancies should be performed. Symptoms in carcinomatous polyarthritis do not respond to conventional anti-rheumatic treatment. A successful cure is obtained by treating the underlying malignancy.

Hypertrophic osteoarthropathy (HOA)
Hypertrophic osteoarthropathy is mostly associated with lung adenocarcinoma. The prevalance varies between 6% and 12%.[9,10] It may also occur in patients with lung metastases of other malignancies, pleural mesothelioma, or intrathoracic lymphoma. The symptoms emerge months before the underlying malignancy.[11] Although the exact etiology is unknown, humoral, vascular, immunologic, and vagal neural reflex mechanisms are implicated in the pathogenesis.[10,12]

The classical disease triad for HOA is the combination of oligo or polyarthritis, clubbing in the toes and fingers, and periostitis at the distal ends of long bones. Rapid progression is seen with this disease, which is related to malignancy. Sometimes a burning pain accompanies the clubbing of fingers. Arthritis is mostly seen in the metacarpophalangeal joints, knees, ankles, elbows, wrists, and proximal interphalangeal joints. They are usually symmetrical and painful. However, synovial fluid analysis shows no sign of inflammation.[11] Deeply localized bone pain is present due to periostitis. The pain is especially prominent at the distal part of the lower extremities and typically increases during movement and decreases when the legs are elevated. These patients may have skin thickening at the forehead and neck as well as gynecomastia.[10]

There is no specific laboratory sign. The sedimentation rate is usually high. Alkaline phosphatase levels may be higher in cases with periostitis. Symmetrical periostitis may be observed in direct radiographies of the long bones. Scintigraphic abnormalities may precede the radiographic findings. Although pain is relieved by nonsteroidal antiinflammatory drugs (NSAIDs), a cure is only possible by treating the underlying neoplasm.

Amyloid arthritis
Amyloid arthritis is generally described in patients with multiple myeloma. The arthritis is characterized by monoclonal light chains (AL amyloid) accumulation at synovium. Typically it involves the shoulders, knees and wrists bilaterally and is relatively painless. Sinovial effusions are non-inflammatory and contain amyloid deposits.[8,13] The diagnosis can be confirmed by bone marrow examination, serum and urine electrophoresis, or a biopsy of the synovium. Carpal tunnel syndrome, subcutaneous amyloid deposition, macroglossia, cardiomyopathy, and nephropathy are other clinical manifestations. The disease responds to the treatment for multiple myeloma and symptomatic treatment of arthritis with NSAIDs.

Secondary gout
Hyperuricemia and gout are mainly associated with hematological malignancies (leukemia, polycythemia vera, lymphomas, etc.), but they may also develop as a result of the rapid lysis of cells after chemotherapy. The severity of gout changes with the severity of the underlying malignancy, liver involvement, and presence of hypercalcemia. Hyperuricemia can be prevented by adequate hydration and allopurinol treatment before chemotherapy.[3]

VASCULITIDES
Paraneoplastic vasculitides
Cutaneous leukocytoclastic vasculitis (LV) is the most frequently encountered paraneoplastic vasculitis,[14] with palpable purpura, urticaria, and maculopapular eruptions being observed, Sometimes it is also accompanied by arthritis. Skin lesions may be seen before, at the time of, or after the diagnosis of malignancies. Cutaneous LV may be associated with myeloproliferative and lymphoproliferative diseases along with myelodysplastic syndrome. Lesions are similar to those observed in patients without underlying malignancies. However, older age, the absence of any infection, or the presence of an autoimmune disease, which can explain the vasculitis, chronic relapses, and unresponsiveness to conventional treatments, should suggest an underlying malignancy.

Polyarthritis nodosa is the second most frequent type of paraneoplastic vasculitis.[14] It is mostly associated with hairy cell leukemia. The clinical manifestation consists of fever, cutaneous vasculitis, myalgia, arthritis, acute abdomen due to mesenteric vasculitis, and foot drop due to mononeuritis multiplex.

Although the etiology of paraneoplastic vasculitis is not yet clearly known, suggested mechanisms are: (i) vascular damage caused by cross-reactions between antibodies against tumor cells and the vascular endothelium (ii) vascular inflammation caused by immune complexes involving tumor antigens (iii) direct vascular damage caused by the hairy cells in hairy cell leukemia. Autoantibodies, such as rheumatoid factor, the antineutrophil cytoplasmic antibody, and antinuclear antibodies, are negative in patients with paraneoplastic vasculitis.[15,16]

Raynaud’s syndrome
Raynoud’s syndrome may occur in association with gastrointestinal, lung, ovarian, and renal carcinoma or with lymphoproliferative diseases. The symptoms are generally asymmetric with digital gangrene. Underlying malignancy should be considered in severe Raynoud cases, especially in individuals 50 years of age or older. Cryoglobulinemia, vasospasm due to immune complexes, hypercoagulopathy, and vasculitis are suggested as possible causes of the pathogenesis.[6,8]

Paraneoplastic erythromelalgia
Erythromelalgia is characterized by burning pain, erythema, and a feeling of heat on the feet or hands without evidence of arterial occlusion. Symptoms are increased by exercise and exposure to heat. About 20% of secondary erythromelalgia cases occur in patients with myeloproliferative diseases, such as polycythemia rubra vera and essential thrombocythemia. Symptoms may begin months or years before the principal disease. Therefore, blood count tests should be performed regularly in these patients. Daily 325-650 mg aspirin intake is recommended. Erythromelalgia can be treated by the management of the underlying malignancy.[17,18]

SKIN AND MUSCLE DISEASES
Dermatomyositis, polymyositis (DM, PM)
The relationship between malignancies and myositis has not yet been clearly identified. Increased cancer incidence among patients with DM is well known.[19] Additionally, DM and PM can be associated with various malignancies, such as lung, ovarian, breast, and nasopharyngeal carcinoma along with testis tumors, lymphoma, leukemia, and malign melanoma.[20] More severe skin lesions are seen in patients with paraneoplastic DM, and they do not respond to conventional immunosuppressive treatment.[3,19] Cancer associated with myositis is generally described in older people, with the risk being higher in females.[3,21]

Scleroderma-like syndrome
Scleroderma like-skin changes can be observed concomitantly with gastric, breast, and lung tumors as well as with metastatic melanoma and osteoclastic myeloma.[22] POEMS syndrome is defined as osteoclastic myeloma associated with polyneuropathy, endocrinopathy, monoclonal protein and scleroderma-like skin lesions. Antitopoisomerase I antibody levels are higher in oncological patients who have scleroderma-like skin changes.[3] However, the skin lesions do not improve with the treatment of the underlying malignancy. Therefore, this situation is considered to be a kind of metastasis rather than a paraneoplastic event.[23]

Paraneoplastic erythema nodosum
Paraneoplatic erythema nodosum (EN) is a type of panniculitis that is observed idiopathically or secondarily to drugs, infections, and rheumatic diseases. However, if it persists longer than six weeks, malignancy-associated EN should be considered. Paraneoplastic EN occurs most commonly in patients with Hodgkin’s lymphoma, non-Hodgkin’s lymphoma, and leukemia. Cases of hepatocellular carcinoma have also been reported. The lesions regress after treatment of the underlying malignancy.[24,25]

Lambert-Eaton syndrome (LES)
Lambert-Eaton syndrome occurs most frequently in patients with small-cell carcinoma of the lungs, which affects about 16% of patients.[26,27] It is characterized by severe fatigue, weakness in the proximal muscles, especially at the lower extremities, and hyporeflexia and is the result of a decreased acetylcholine release at the presynaptic neuromuscular junction and cholinergic autonomic endings. Underlying malignancy may be diagnosed approximately one to two years after the initiation of muscle strength loss.[8] There are no pathophysiological or clinical differences between primary LES and paraneoplastic LES. It is believed that autoantibodies against the cellular membrane of small-cell lung carcinoma block the neural calcium channels by cross-reaction.[26,27]

Panniculitis-polyarthritis syndrome
This syndrome is characterized by inflammation of the subcutaneous adipose tissue and usually is associated with pancreatic malignancies. Arthropathy, subcutaneous sensitive nodules, synovitis, polyserositis, and bone lesions can be observed. The skin lesions appear as tender, red subcutaneous nodules. The possibility of pancreatic cancer should be considered in older patients who present with tender subcutaneous nodules and unexplained arthritis.[10,30]

Paraneoplastic eosinophilic fasciitis
Paraneoplastic eosinofilic fasiitis is an uncommon connective tissue disease characterized by diffuse fasiitis, eosinophilia, unexplained symmetrical pain, and woody induration of the skin at the hands and/ or feet. The disease usually is observed in patients with lymphoproliferative diseases. The skin of the affected extremity is thick and tight. Contractures may develop due to skin sclerosis. The absence of Raynoud’s syndrome and unresponsiveness to corticosteroid treatment distinguishes eosinofilic fasiitis from scleroderma.[31,32]

Paraneoplastic lupus-like syndromes
Lupus-like syndromes may be predictive signs for breast and ovarian cancers along with hairy cell leukemia. Clinical manifestation may consist of polyserositis, pneumonitis, Raynaud’s syndrome with digital necrosis, non-erosive inflammatory arthritis, and glomerulonephritis. Leucopenia and ANA (antinuclear antibody) positivity can be seen, but ANA positivity without rheumatic symptoms is not predictive of occult malignancy.[2,3,6]

Recurrent polychondritis
Recurrent polychondritis is observed in 30% of patients with chronic inflammatory diseases and may occasionally be a paraneoplastic syndrome. It is characterized by inflammatory attacks of cartilage tissues at the nose, ears, trachea-bronchial, and joints. Associations with myelodysplastic syndromes and non-Hodgkin’s lymphoma have been reported.[35,36]

Oncogenic osteomalacia
Oncogenic osteomalacia is associated with benign tumors which originate in the mesenchymal cells. There is hypophosphatemia, hyperphosphaturia, and decreased concentrations of 1.25 dihydroxyvitamin D3 concentrations in the plasma. Diffuse bone pain, spontaneous fractures, and weakness in the proximal muscles can be observed. The possibility of an underlying tumor should be considered in adult osteomalacia of unknown etiology. In the majority of cases, tumor excision is adequate for treatment. If total resection of the tumor is not possible, then phosphate and active vitamin D supplements should be given.[9,39,40]

Acknowledgment
We would like to thank Elif Aydın, M.D. for her contribution to the reviews.