Objectives: In this study, we aimed to evaluate the efficacy of magnetic resonance imaging (MRI) in demonstrating erosive alterations during the early period of rheumatoid arthritis (RA).

Patients and methods: Twenty-one wrists of 14 patients (11 females, 3 males; mean age 54 years; range 37 to 64 years) diagnosed with RA by clinical data and laboratory results were examined with MRI. The disease activity was determined by C-reactive protein and erythrocyte sedimentation rates. Wrist radiographies of all the patients were either normal or had suspicious signs. The presence of bone erosion was evaluated in 15 different regions (8 carpal bones, 5 metacarpal heads, 1 distal radius, and 1 distal ulna). Coronal and axial T1-weighted spin echo (SE) images with and without fat suppression, coronal T2-weighted turbo SE images with fat suppression, and coronal T1-weighted SE images with fat suppression following administration of intravenous gadopenteate dimeglumine were obtained.

Conclusion: Magnetic resonance imaging may be an effective diagnostic method for the determination of early period joint involvement in RA cases.

Rheumatoid arthritis (RA) is a systemic inflammatory disease characterized by proliferative hypervascularized synovitis which primarily affects synovial joints. Synovium of bursa; tendon sheaths; attachment sites of cartilage, ligament, and tendons to the bone; soft tissue; and bones can be mentioned among the other areas under influence of RA. Changes happen to be symmetrical and may present as fusiform soft tissue swelling, regional osteoporosis, marginal-central erosions, cartilage damage, joint destruction, narrowing of joint space and fibrous ankylosis. Wrist, metacarpophalangeal and metatarsophalangeal joints are the first sites to be affected.[1-10]

According to the epidemiological data, RA affects 1% of the population. While it shows a slow progression in some patients, in some it has a course characterized by rapid destruction of the bone and joint space. Initial symptoms are observed in people between the ages of 40-60 years old.[4]

Diagnosis is established by clinical, laboratory, and radiological findings. As a result of advanced treatment methods, early diagnosis bears importance in preventing arthritis from progression to advanced stages. Radiography falls short in showing bone damage in the early period.[7,10,11] Magnetic resonance imaging (MRI) and ultrasonography can be useful tools in evaluating patients with early rheumatoid arthritis. Magnetic resonance imaging allows direct visualization and assessment of synovitis, the primary lesion in RA, and of bone edema, a finding unique to MRI and a probable forerunner of bone erosions.[12] The first study comparing MRI and X-ray scanning of the wrist joint of RA patients was published in 1988.[13] Since then, a large number of publications using MRI in RA have demonstrated its usefulness in the detection of early period inflammatory and structural changes in RA cases.[1-12,14,15] Moreover, MRI is the ideal instrument for the evaluation of treatment response.[16] Since 1998, an international Outcome Measures in Rheumatology Clinical Trials (OMERACT) MRI in an RA working group has aimed to develop MRI scoring systems to assess RA inflammation (activity) and damage which would satisfy the elements of the OMERACT filter (truth, discrimination, and feasibility).[12,17] The OMERACT MRI group has published definitions of important RA pathologies and basic recommendations of MRI sequences selection. The group has also delivered a reference image atlas for scoring synovitis, bone marrow edema, and erosions in RA wrist and metacarpophalangeal joints.[18,19] It indicates an improved sensitivity to change for erosive joint damage by using this MRI score as compared with radiography, particularly in early disease.[12,20-25]

Our aim is to evaluate the efficacy of MRI in showing erosive changes in the early period of RA cases.

Patient selection
Among 14 patients, (11 females, 3 males; mean age 54 years; range 37 to 64 years) diagnosed as RA based on the clinical and laboratory data, 21 wrists were retrospectively evaluated. Rheumatoid arthritis diagnosis was established according to the diagnostic criteria outlined by American College of Rheumatology (ACR) in 1987.[1] Patients having symptoms for six months or less (mean value 5 months) were included in the study. Activity of the disease was determined by C-reactive protein and erythrocyte sedimentation rate. The ethical committee of our hospital approved our study. Since our aim was to determine presence versus absence of pathology without attempting to quantify its severity, scoring for synovitis and erosions according to the OMERACT Rheumatoid Arthritis Magnetic Resonance Imaging Studies system was not performed.

Synovitis and tenosynovitis
Synovitis was defined as staining and thickening of the synovial membrane with the contrast agent in a diffuse and regular way.

Bursitis
Bursitis was defined as an oval circumferential enhancement in the intermetatarsal and submetatarsal region between metatarsal heads accompanied by a contrast agent and fluid collection on T1-weighted fatsuppressed images.

All the cases had a radiograph which was either normal or with suspicious erosions. Magnetic resonance imaging showed 73 (81.1%) bone erosions over different sites in carpal bones, four (4.4%) in distal radius, four (4.4%) in distal ulna, and nine (10%) in proximal metacarpal heads. All the erosions were single or multiple and non-adjacent focal while showing low signal intensity on T1-weighted images with contrast enhancement and high intensity signals on T2-weighted images (Figure 1-3). No bone marrow edema signs which are seen in the advanced stages of the disease as diffuse or converging signal changes were observed. Capitate was the site having the highest number of erosions with 20 (27.3%), followedby triquetral, scaphoid, lunate, trapezoid, hamate, trapezium, and pisiform having 18 (24.6%), 11 (15%), eight (10.9%), six (8.2%), six (8.2%), three (4.1%), and one (1.3%) erosion, respectively. 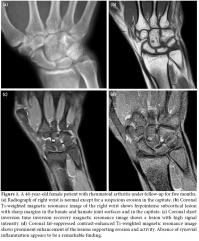 Figure 1. A 48-year-old female patient with rheumatoid arthritis under follow-up for five months. (a) Radiograph of right wrist is normal except for a suspicious erosion in the capitate. (b) Coronal T1-weighted magnetic resonance image of the right wrist shows hypointense subcortical lesion with sharp margins in the lunate and hamate joint surfaces and in the capitate. (c) Coronal short inversion time inversion recovery magnetic resonance image shows a lesion with high signal intensity. (d) Coronal fat-suppressed contrast-enhanced T1-weighted magnetic resonance image shows prominent enhancement of the lesions supporting erosion and activity. Absence of synovial inflammation appears to be a remarkable finding.
× 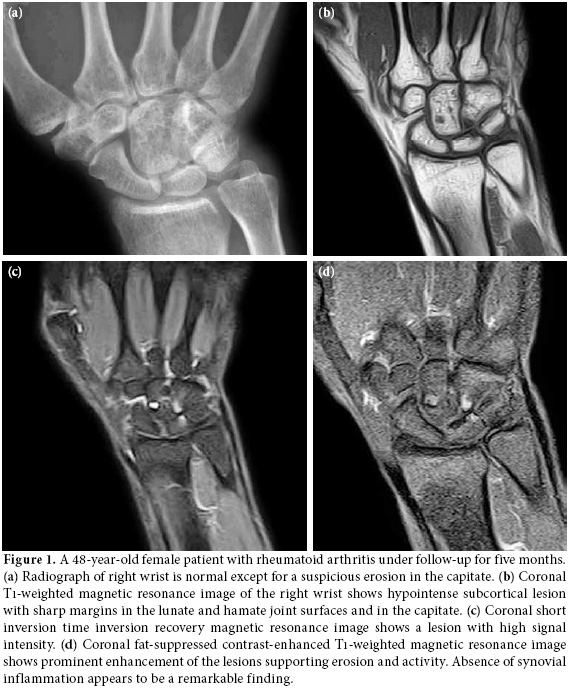 Figure 3. A 53-year-old female patient under follow-up for five months for rheumatoid arthritis. (a) Right wrist magnetic resonance examination shows focal lesion with high signal intensity in the trapezoid on the coronal short inversion time inversion recovery image. (b) Subcortical and hypointense lesion with sharp margins on the T1-weighted coronal image. It is not possible to define it as a typical erosive change. (c) Significant contrast enhancement on the fat-suppressed contrast enhanced magnetic resonance image supports bone erosion. It would be difficult to differentiate the lesion from a bone islet if the image had not shown contrast enhancement.
×

Table 1. Demographic and clinical characteristics of the study group
× 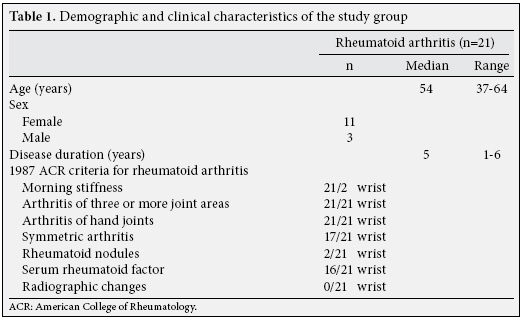 Table 2. Activity of the disease
× 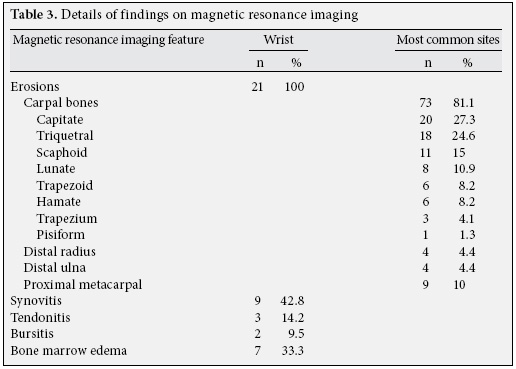 Due to advanced therapeutic methods, early diagnosis is important in RA. The earliest pathological symptom is acute synovitis. However, the relationship between synovitis and bone changes is contentious. A study has shown a weak relationship between synovitis and progression in bone changes.[26] Nonetheless, another study has described their relationship as strong.[23] In the current study, we determined synovitis frequency as 42 percent. Haavardsholm et al.[21] conducted a study and reported development of bone marrow edema due to inflammatory activation which acts as a precursor to erosive changes. McQueen and Ostendorf[27] demonstrated that erosions might start in the bone marrow through an inflammatory release of cytokines stimulating osteoclasts to resorb the bone. Thus, erosions are among the early period changes in RA and detecting them is important. By early diagnosis, irreversible joint damage and eventual complications can be prevented. Erosions show a frequency of more than 47% in the year following the beginning of the disease.[1]

Magnetic resonance imaging can detect erosions in the early period. Fleming et al.[28] revealed that MRIs from RA patients demonstrate several positive findings even when conventional radiographs are normal. Other investigations demonstrated that erosions on radiographs were evident on MRI a median of two years earlier and that MRI could be a superior tool for tracking progression of RA in patients.[29,30]

McQueen et al.[23] determined an erosion rate of 45% in the MRI and 15% in the conventional radiography four months after the beginning of the symptoms. While radiography is a conventional method used for diagnosis, staging, follow-up, and monitoring of treatment efficacy, it is not a sensitive modality for detection of early erosions. They may not be detected owing to the superposition of the bones. It is difficult to determine particularly the intramedullary-penetrated erosions surrounded by the bone. Because MRI is based on sections, it shows not only the erosions on the dorsal and volar plane, but also the ones that are penetrated.[26] Magnetic resonance imaging has been shown to be very sensitive in detecting erosions.[31,32] Besides detecting erosions in the early period, MRI has a multiplanar feature which is efficient in showing complications such as synovitis, pannus, synovial fluid, bursitis, and tenosynovitis. Moreover, MRI practices with intravenous gadolinium administration can discriminate pannus formation from synovial fluid. In cases where a contrast agent is not delivered, this is quite a problem, and thickened synovium cannot be distinguished from intraarticular fluid on T2-weighted images.

In the current study, we found bone erosion in all the cases with a normal or suspicious wrist radiograph. Our study shows the superiority of MRI over conventional radiography in detection of early stage erosive changes. By adding contrast studies, detection of erosive changes becomes easier. Moreover, the extent and complications of the disease can be evaluated better.

In the present study, we determined erosion mostly in the carpal bones of the wrist. The most frequently affected carpal bones were capitate (27.3%) and triquetral (24.6%) whereas the least commonly affected bone was pisiform (1.6%).

In our study, synovitis was found in nine (42.8%) of 22 wrist examinations which indicated no strong relationship between erosive changes and synovitis. Synovial thickening or enhancement may not exist in the presence of erosions stained by the contrast which supports the study of Kirvan.[33] However, further studies including a larger number of cases are required.

The first limitation of our study was the low number of cases. The second limitation was the conventional nature of the radiographs which were unable to demonstrate adequate quality. The third limitation was the inability to image sections thinner than 3 mm due to the occurrence of an increase in imaging duration and reduction in contrast resolution.

In conclusion, MRI may an effective diagnostic method in the detection of early stage joint involvement and the determination of the disease activity in RA cases. In patients suspected of having arthritis, if the diagnosis is based on radiological findings, then MRI should be preferred over conventional radiography. In particular, contrast enhancement on T1-weighted images in areas suspected of erosive change supports bone erosion. In cases where synovial thickening and contrast enhancement are not present, erosive changes may occur all the same. Further studies are needed on this subject.