Erosive osteoarthritis (EOA) is a progressive disease affecting the interphalangeal joints of the hand. It is also known as an inflammatory form of osteoarthritis. Pain, swelling, redness, warmth and limited function of the hand joints are commonly found in most patients with or without Heberden and Bouchard's nodes. Conventional radiographs of the hands show a combination of bony proliferation and erosions, which give characteristic patterns of the affected joints, known as “gull-wing” and “saw-tooth” deformities. Since there are no distinguishing laboratory findings between EOA and other common erosive interphalangeal arthropathies, radiographic features still have diagnostic value along with clinical presentation. Thus, recognition of the radiological manifestations may lessen the likelihood of misdiagnoses. A treatment-resistant case of EOA with marked and confusing inflammation is described in this report.

Erosive osteoarthritis (EOA) is an uncommon subset of osteoarthritis (OA) characterized by both inflammatory and degenerative phenomena of the distal interphalangeal (DIP) and proximal interphalangeal (PIP) joints of the hand. It less frequently affects the first carpometacarpal joint.[1] In the feet, the first metatarsophalangeal joint may be affected, and there are occasional descriptions of EOA located in the interphalangeal joints of the feet. Other joints such as the hip and shoulder may also be very rarely affected.[2-4] Erosive osteoarthritis is also known as an inflammatory form of OA. The detection of synovial membrane inflammation and tenosynovitis in most patients with EOA is consistent with the term of “inflammatory OA”.[5,6]

Abrupt-onset pain, swelling, redness, warmth and limited function of the hand joints are commonly found in most patients.[1,7] While clinical clues exist, the distinction from other rheumatic diseases affecting the small joints of the hand is based on the radiographic appearance and demonstration of typical erosions. Recognition of these radiologic findings may lessen the likelihood of misdiagnoses. Radiological features of EOA include joint space narrowing, subchondral sclerosis, marginal osteophytes, and erosions which begin at the central portion of the joint and give characteristic patterns of the affected joints known as “gull-wing” and “saw-tooth” deformities. Excessive osseous proliferation can also be seen, leading to severe deformities and sometimes to interphalangeal (IP) ankylosis.[2,3,8] Erosive osteoarthritis is especially confused with psoriatic arthritis (PsA). Patients with EOA may exhibit clinical and radiologic features which are very similar to PsA. Both diseases have predilection for the DIP and PIP joints of the hands. Additionally, new bone formation, severe interphalangeal joint destruction and fusion may be confused in these two diseases.[1,2] Here we describe a case of EOA refractory to conventional treatments. Additionally, the patient has symmetrical small joint involvement of the hands with marked and confusing inflammation mimicking rheumatoid arthritis (RA), PsA or other erosive interphalangeal arthropathies.

A 54-year-old woman presented with pain, swelling, morning stiffness and deformity of DIP and PIP joints in both hands. She had used various nonsteroidal anti-inflammatory drugs (NSAIDs), but her complaints had accelerated year by year. On initial examination, the patient showed changes of DIP and PIP joints characterised by tenderness, swelling and decreased range of motion (Figure 1). Strikingly, the metacarpophalangeal (MCP) joints, wrist and foot joints were not affected. Hand radiographs (Figure 2, 3) showed typical features of EOA in DIP and PIP joints such as joint space narrowing, subchondral sclerosis, marginal osteophytes and erosions in the central portion of the joint giving “gull-wing” and “sawtooth” appearances. Laboratory findings showed a raised erythrocyte sedimentation rate (ESR) of 34 mm/h (normal <20) and C-reactive protein (CRP) of 14 mg/l (normal <5 mg/l). The patient was negative for rheumatoid factor (RF), anti-cyclic citrullinated peptide (anti-CCP) antibodies and antinuclear antibodies (ANA). C3 and C4 complement levels were within normal limits and routine biochemistry was normal. Using the information gathered from the clinical, radiological and laboratory findings, she was diagnosed with EOA. Other rheumatic diseases which could affect interphalangeal joints were excluded. Thereafter, the patient was prescribed medications consisting of hydroxychloroquine (200 mg/day), colchicine (1.5 mg/day) and meloxicam (15 mg/day), but this initial therapeutic attempt did not resolve the articular symptoms. The patient had a high level of pain (visual analog scale; VAS=72 mm) and a long time of morning stiffness (longer than an hour). For this reason, prednisolone (10 mg/day) was added, and the hydroxychloroquine dose was raised to 400 mg/day. Four weeks after the initiation of prednisolone, there was considerable improvement in the pain (VAS=28 mm) and morning stiffness (less than 10 minutes). Additionally, ESR and CRP decreased to normal levels (14 mm/h and 3.08 mg/l respectively). The prednisolone dose was then gradually tapered to 5 mg/day, but it could not be completely stopped because of relapsing symptoms. No evidence of any collagen tissue disease has been shown during clinical and laboratory follow-up for one year. 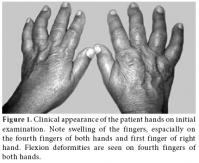 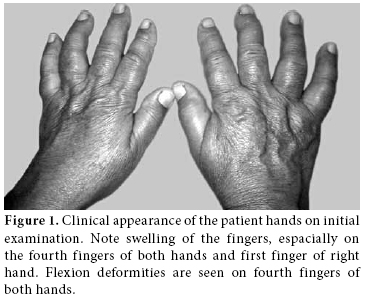 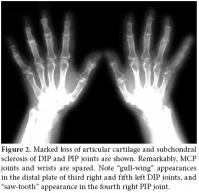 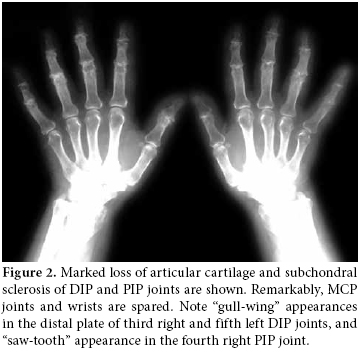 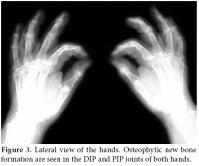 Figure 3. Lateral view of the hands. Osteophytic new bone formation are seen in the DIP and PIP joints of both hands.
× 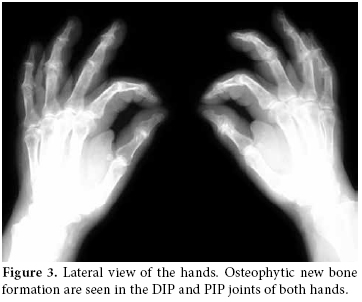 Erosive osteoarthritis is a progressive disorder with a typically bilateral and symmetrical distribution in the interphalangeal joints and less frequently the first carpometacarpal joint of the hand or the foot joints. Radiologically, central erosions which typically show the classic “gull-wing” or “saw-tooth” deformity characterize this disorder.[1,2,7] Laboratory findings, such as ESR, CRP, ANA, RF are usually negative, but a slight increase of ESR and CRP may occur.[7-9] Although the diagnosis of EOA rests upon careful roentgenological reading, analysis of clinical and laboratory findings are the keys to differentiating this disease from other more common interphalangeal arthropathies such as RA, PsA, chronic tophaceous gout, chronic renal diseases and endocrine diseases.

In our patient, the distribution of articular lesions ruled out the diagnosis of RA as DIP joint involvement occurs less commonly.[10] The anti-CCP antibodies and RF can be considered a further useful test to help discriminate between EOA and RA.[11] In our patient, the negative RF and anti-CCP tests made the diagnosis of RA unlikely and argued for the diagnosis of EOA. Additionally, the presence of characteristic radiological findings including osteophytes, subchondral sclerosis and central erosions which gave “gull-wing” and “sawtooth” appearances was consistent with EOA. Central erosions, subchondral sclerosis and osteophytes are not typically seen in RA. The typical radiographic findings of RA include periarticular osteopenia and marginal erosions.[12]

Interphalangeal joint involvement is a common feature of PsA, but an asymmetrical pattern of articular involvement, psoriatic skin and nail abnormalities, a family history of psoriasis, sacroiliac and spinal radiographic changes are additional features which help in differentiating PsA from EOA. We should note that all these were negative in our patient. Additionally, similar to RA, PsA causes marginal erosions giving a “mouse ear” appearance in the interphalangeal joints. Furthermore, in PsA the erosions occur not only in the DIP and PIP joints, but in MCP and wrist joints as well.[2,13,14]

Chronic tophaceous gout often affects the interphalangeal joints of the hand, mostly asymmetrically, showing central, marginal or periarticular erosions with overhanging edges. However, in gouty arthritis the joint space is well preserved until the late stages of the disease.[16] The joint space preservation and presence of tophi clearly distinguish chronic tophaceous gout from EOA. In our patient, the interphalangeal joints spaces were markedly narrowed, tophi were not seen on physical examination, and the serum uric acid level was within normal limits.

Calcium pyrophosphate deposition disease (pseudogout) may be found in EOA patients.[2] Involvement of the radiocarpal joint is characteristic of the arthropathy associated with calcium pyrophosphate deposition disease. Its occurrence in one patient with EOA probably represents coexistence of two separate diseases. Radiographically, chondrocalcinosis may be seen in affected joints such as the knee or wrist.[17] Neither radiocarpal joint involvement nor chondrocalcinosis were seen in the current patient.

Other diseases where it is possible to find erosive changes resembling EOA of the hand include hypothyroidism, hyperparathyroidism, chronic renal failure, amyloidosis and frostbite.[1] In our patient, all of these were excluded by clinical and laboratory findings.

There are currently no guidelines on the best therapeutic approach for EOA. The available treatments are limited and include analgesics, NSAIDs and intra-articular injection of corticosteroids.[1,7] Slow-acting symptomatic drugs for OA have also been studied in EOA. The most commonly used was chondroitin sulfate which in different studies demonstrated efficacy in the control of symptoms and radiological disease progression.[18,19] Rovetta and Monteforte[18] performed a study to assess the effects of chondroitin sulfate in EOA. They observed that pain was significantly reduced in EOA treated with chondroitin sulfate but not in untreated controls. In another study, the influence of two different treatment regimens on erosions was evaluated: chondroitin sulfate 800 mg/day plus naproxen 500 mg/day versus naproxen 500 mg/day only. Radiological examinations were performed at baseline and after 12 and 24 months. Although the number of erosions showed a general tendency to increase over time in both groups, the progression at 24 months was lower in patients treated with 800 mg/day chondroitin sulfate plus naproxen than in patients taking naproxen alone.[19] Unfortunately, all the above-described therapeutic options may be disappointing. Hydroxychloroquine has been reported as being helpful in the relief of pain and inflammation in EOA.[20] However, there are no prospective and controlled studies to assess the efficacy of hydroxychloroquine in the clinical and radiological evolution of EOA. Recently, anti-TNF therapy has been reported to be an effective strategy for the treatment of EOA.[21,22] A pilot study showed the symptomatic effect and possible disease-modifying action of intra-articular infliximab in EOA of the hand.[21] In another study, treatment with adalimumab for 12 weeks revealed significant improvement in the number of swollen joints and trends suggesting modest improvement in the number of tender joints, disability and pain scores.[22] Additionally, a study of an interleukin 1 receptor antagonist anakinra demonstrated a good response to this biologic agent in EOA.[23]

In conclusion, EOA can present with severe and treatment-resistant symptoms along with confounding inflammation, and can be mistakenly diagnosed as seronegative RA or PsA at a stage when skin lesions have not yet appeared. Recognition of the radiologic manifestations of these diseases may lessen the likelihood of such misdiagnoses.