Coexistence of Familial Mediterranean Fever and Rheumatoid Arthritis in A Case

Familial Mediterranean Fever (FMF) is an autosomal recessive polysystemic disease characterized by attacks of relapsing and self-limiting fever, peritonitis, pleuritis and arthritis. Rheumatoid Arthritis (RA) is an erosive, chronic, inflammatory disease that affects hand and ankle joints in polyarticular type and causes deformities. To our knowledge, development of RA in a patient with FMF has not been reported before. Therefore, we present a 48 years old case who developed RA during the course of FMF. (Turk J Rheumatol 2010; 25: 44-6)

Familial Mediterranean Fever (FMF) is an autosomal recessive polysystemic disease characterized by attacks of relapsing and self-limiting fever, peritonitis, pleuritis and arthritis. FMF is seen more frequently among Turkish, Armenian, Jewish and Arabic populations[1,2]. This disease is commonly transmitted autosomal recessively. It is already known that mutation of the MEFV gene, which codes the protein called pyrin causes FMF. Arthritis attacks are present in 50 to 70% of FMF cases and they occur commonly as non-erosive and non-deforming acute monoarthritis effecting large joints of lower extremities such as hip and knee. Also other types of joint involvements like ankle or very rarely temporomandibular joint have also been reported. Arthritis generally lasts for one month[3,4]. In addition, involvement of the joints in the form of chronic monoarthritis can be seen very rarely during this disease[2].

Rheumatoid Arthritis (RA) is an erosive, chronic, inflammatory disease that affects hand and ankle joints causing deformities[5]. RA affects 0.8% of the world population[6]. While RA begins insidiously in 75% of the patients and the initiation is acute or subacute in approximately in 25%. Most frequently involved joints in rheumatoid arthritis are metacarpophalangeal (MCP), proximal interphalangeal (PIP) and radiocarpal joints. The disease begins frequently with the involvement of small joints of the hands and wrists symmetrically. While swelling of soft tissue, pain and warmth are detected in the early period, deformities causing disability can occur in the late period[7].

As we have not encountered development of RA during FMF course in literature, we intended to present a 48 years old FMF case diagnosed as RA with clinical, laboratory and radiological findings.

Forty eight years old female patient complaining of pain, swelling and warmth in her radio-carpal, MCP, PIP joints and ankles, accompanying morning stiffness lasting for one hour for 1 year applied to our outpatient clinic. Four years ago genetic analysis was made due to complaints of abdominal pain and fever attacks for 10 years. She was diagnosed as FMF after the detection of M694V homozygote mutation in her MEFV gene. She has been treated with 1.5mg/day colchicine for approximately four years. The family history was negative. Systemic examination of the patient was normal. Severity of pain was 8 cm (Visual Analogue Scale=VAS; 10cm), and in her musculoskeletal system examination tenderness and warmth were detected in her both wrists, all MCP and PIP joints and ankles. There were no deformities. Periarticular osteopenia and joint space narrowing were detected in all PIP joints in hand-wrist antero-posterior radiographies (Figure 1). The foot-ankle x-rays were normal. In laboratory examination, erythrocyte sedimentation rate (ESR) was 71mm/hr, C reactive protein (CRP) was 30mg/L, rheumatoid factor was 412 IU/ml, anti-CCP (cyclic citrullinated peptide) was positive. Following RA diagnosis, treatment with oral methotrexate 15mg/week and prednisolon 10mg/day was initiated. In addition to medical treatment, cold pack and Transcutaneous Electrical Nerve Stimulation (TENS) were applied to provide analgesia. Treatment with 1.5mg/day colchicine was continued for FMF. Patient was informed about her disease and regular control visits. During her control after two months her ESR and CRP were within normal limits, arthritis symptoms in her joints were regressed and VAS score for pain was 2. During the clinical follow-up patient described a decrease in her urination. She was then was referred to nephrology department and secondary amyloidosis was detected in her left kidney after biopsy. 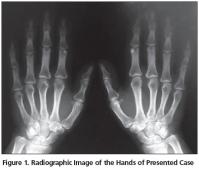 Figure 1. Radiographic Image of the Hands of Presented Case
× 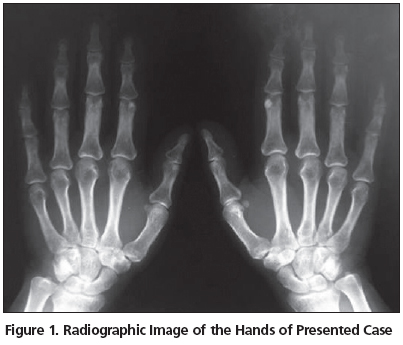 Although coexistence of FMF with RA has not been published before, it was shown with juvenile idiopathic arthritis (JIA)[8,9]. In a case reported by Keles et al.[8] there was coexistence of FMF, ankylosing spondylitis and JIA. The authors emphasized that etiopathogenesis underlying the coexistence of these diseases has not been explained clearly. Rozenbaum et al.[9] detected 3 JIA cases among 98 FMF patients with disease initiation earlier then 10 years of age. In another study on RA patients it was shown that serum interleukin-2 receptor concentrations increased significantly in RA and FMF patients during the active disease period[10]. Another study associated with the etiopathogenesis of these two diseases explored concentrations of ELR (+) CXC chemokines and IL-8 responsible for angiogenesis and neutrophil chemotaxis in synovial fluid. While among these chemokines epithelial neutrophil activating protein-78 (ENA-78) and interleukin-8 (IL-8) concentrations were specifically high among RA patients there was no significant difference in granulocyte chemotactic protein-2 (GCP-2) concentrations between RA and FMF patients[11]. These studies reveal that chemokines and cytokines can be effective in the etiopathogenesis of both diseases.

As is known, initially and frequently involved regions in RA are the small joints of hands and feet[12]. While determining radiological characteristics of these regions, Larsen Dale Method can be utilized[13]. In our case, periarticular osteopenia and joint space narrowing were detected in all PIP joints in hand-wrist x-rays. According to Larsen staging this was compatible with stage 1 RA radiological image[13]. On the other hand arthritis occurring during the course of FMF affects particularly the large joints of lower extremities. In most cases temporary, monoarticular type, non-erosive and non-deforming arthritis was seen. In a study arthritis was found in 31% of FMF patients and monoarticular involvement was detected in 70%, oligoarticular involvement was detected in 26% and polyarticular (similar to rheumatoid) involvement was found in 4% of the patients[14]. During FMF course polyarticular type arthritis involving small joints is seen very rarely[15]. Attacks of arthritis generally regress in a week. But in 5% of the cases, prolonged attacks of arthritis involving particularly hip and knee can occur and causing permanent joint injury and deformities[16]. In our case, there was polyarticular type small joint involvement effecting hand and foot joints symmetrically, similar to joint involvement in RA. Laboratory examination in order to exclude RA in differential diagnosis showed RF and anti-CCP positivity. RF test is positive in 70-80% of RA patients[17]. However anti-CCP is a very recent and specific marker for RA. For the diagnosis of RA, specificity of Anti-CCP autoantibodies is 91-98% and sensitivity is 41-67%[18]. In addition to these laboratory findings, as she fulfilled American College of Rheumatology (ACR) criteria[19] by the presence of morning stiffness and radiographic findings, our patient was diagnosed as RA.

There are no specific laboratory tests to diagnose FMF. During the attacks, serum CRP, fibrinogen, amyloid A, ESR and leukocyte count increase[20]. FMF is diagnosed according to clinical findings, history, family history and response to colchicine treatment[20]. In addition, especially in suspected cases demonstration of MEFV gene mutation is required[16]. In a study mutation was detected in 71.2% of MEFV gene of chromosomes of FMF patients. Most frequent mutation is M694V with the rate of 39.6%[22]. As a result of the genetic analysis M694V mutation was detected in MEFV gene of our case. Robinovich et al.[20] observed the presence of M694V mutation in clinically severe RA patients. According to this report our case also could be considered just as a RA patient. But it is known that FMF is a genetically transmitted disease characterized by attacks of relapsing fever, joint, chest and abdominal pain. In our case there were also abdominal pain and fever complaints for 10 years. Although the M694V gene mutation in RA patients is generally heterozygote[6], it was homozygote in our case.

While in the literature, coexistence of FMF with rheumatoid disease like Sjögren's syndrome[23], seronegative spondyloarthropathy[24], Behcet's disease[25] and juvenile idiopathic arthritis[8,9] was reported, this is the first report regarding its coexistence with RA. In conclusion, RA should be considered in differential diagnosis in the presence of polyarticular type joint involvement during the course of FMF and early treatment should be initiated.