Objective: Differentiation of rheumatoid arthritis (RA) from other diseases with joint involvement such as hepatitis-C virus (HCV) infection represents a diagnostic problem. In addition to the rheumatoid factor (RF), more specific and sensitive auto-antibodies are under evaluation in recent years with conflicting results. In this study, we tested the diagnostic value of rheumatoid factor, anti-cyclic citrullinated peptide (anti-CCP) and anti-mutated citrullinated vimentin (anti-MCV) in distinguishing RA from hepatitis C patients.

Results: In roc analysis, area under curve (AUC) was the highest in anti-CCP. Sensitivity and specificity was 82% and 53%, 79%, and 96% and 70%, and 73% for RF, anti-CCP and anti-MCV respectively. DAS-28 has a weak correlation with RF (r=0.406), anti-CCP (r=0.433), and anti-MCV (r=0.453). There was no difference between the patients in autoantibody levels regarding extra-articular involvement and DAS-28 in RA, and joint involvement in hepatitis C patients.

Conclusion: Anti-MCV antibodies may be useful in distinguishing RA however it seems to have no additional value over anti-CCP or RF in hepatitis C patients. Anti-CCP antibodies are more reliable in diagnosis of RA due to their high specificity. (Turk J Rheumatol 2010; 25: 19-23)

Rheumatoid arthritis (RA) is characterized by inflammation of joints resulting in severe disability. Early diagnosis and treatment is crucial on this account. In addition to clinical features, auto-antibodies are also of special interest because of their role in discriminating the disease. Although rheumatoid factor (RF) was the gold standard more specific and sensitive auto-antibodies are being searched in recent years.

Antibodies against citrullinated peptides, the peptides post-translationally modified by the conversion of arginin to citrulline, have gained importance with the contention to be specific serological markers for RA[1,2]. Citrullination causes protein unfolding possibly altering protein structure resulting in aberrant recognition in the immune system. They are assumed to be triggered in the context of genes that confer susceptibility to RA and by environmental agents[1]. Being as sensitive as RF and even more specific, anti-cyclic citrullinated peptide (anti-CCP) is now candidate for crown of RF. Anti-CCP has a comparable sensitivity to RF (50-75%) with a higher specificity (90-95%)[1,3]. However, there are also contradictory results related to HCV infection where specificity of anti-CCP for RA is questioned[4,5].

HCV infection is usually asymptomatic and may be detected incidentally; it also induces immunological extra-hepatic manifestations including arthralgia and arthritis which can mimic RA, and discrimination is really difficult without observing the erosions[6]. Along with anti-CCP, a new marker, anti-mutated citrullinated vimentin (anti-MCV) came into question. Anti-MCV antibodies have been searched mainly in connective tissue diseases recently[7-9]. In a meta-analysis, sensitivity and specificity of anti-MCV antibody were reported as between 0.64-0.84, and 0.79-0.96 respectively which almost is equal to that of anti-CCP in RA[8]. Unfortunately, the role of this autoantibody in discriminating RA from hepatitis C patients is not clear as there is only one study which included hepatitis C patients as controls, revealed discouraging results[10].

In this study we aimed to investigate the diagnostic value of RF, anti-CCP and anti-MCV in differentiating RA from HCV associated rheumatological manifestations.

Thirty-four RA patients, classified according to the ACR 1987 revised criteria[11] were consecutively recruited from the outpatient rheumatology clinics between October 2008 and February 2009. Disease activity score 28 (DAS 28) was evaluated and scores ≤3.2 were accepted as mild active[12]. Disease, duration and extra-articular involvement were also documented.

Thirty patients having hepatitis C infection with positive anti-HCV antibodies and HCV RNA were included as the control group. Histological activity index and fibrosis were evaluated according to the modified Knodell score in hepatitis C patients[13]. Patients with disease activity score ≤3 were evaluated as mild active and others as active. Fibrosis was evaluated as grade 1-3.

Serum samples were stored at -80°C until analysis. All results were obtained by blinded laboratory technicians.

Statistical analysis was performed by Medcalc version 9.2.1.0. Significance was assumed at p<0.05. Receiver operating characteristic (roc) curve analysis was obtained for determining diagnostic values of assays. Optimal cut off values were obtained by the maximum value of sensitivity + specificity-1.

To compare the data among RA and hepatitis C patients, Mann Whitney U test was used. In searching the difference between patients with and without extra-articular involvement, mild and severe active patients in RA and hepatitis C patients with and without arthralgia, Fisher's exact test was performed. Pearson correlation was used for searching the correlation between the parameters.

The study protocol was approved by the local ethics committee.

Demographic, clinical and serological parameters of the RA and hepatitis C patients are given in Table 1.

Table 2. Quantitative results of the assays
× 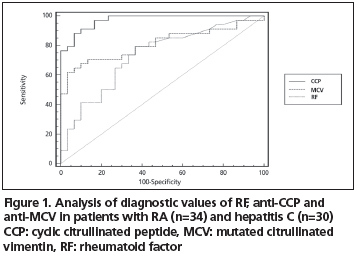 Table 3. Diagnostic value of the assays at manufacturers' and optimal levels for rheumatoid arthritis (n=34) and hepatitis C patients (n=30).
×

According to DAS 28 score, RA patients were classified as mild and severe active disease with the cut-off value of 3,6. There was also not a significant difference between these groups regarding RF, anti-CCP or anti-MCV (Fisher's exact test was used, p>0.05).

Arthralgia was present in 10 (33%) of the hepatitis C patients. Wrists, elbows, shoulders, knees and ankles were involved predominantly. No significant difference between hepatitis C patients with or without arthralgia regarding the autoantibody assays was detected (Fisher's exact test was used, p>0.05). Because of elderly age and rejection of the process, biopsy was performed only in 21 patients. There were only 2 patients with histological activity index ≤3. Fibrosis was observed as grade 1 in 15 patients, grade 2 in 5 patients, and grade 3 in 1 patient.

In our study we investigated the diagnostic value of RF, anti-MCV and anti-CCP antibodies in distinguishing RA from HCV infection.

Anti-MCV was strongly correlated with anti-CCP however the correlation of anti-MCV with RF was very weak. This finding is consistent with the literature[7,14].

The sensitivity and specificity of these auto-antibodies for RA vary in the literature between 55-84% and 77-98% for anti-CCP and 49-74% and 79-96% for anti-MCV, respectively[7,8,10,14-20]. The difference in the control groups of these studies might have evoked this diversity in the results. Some of them included healthy controls, some included autoimmune diseases, and some included both of them. Though there were results favoring anti-MCV over anti-CCP[17,20], majority of these studies found anti-CCP more specific than anti-MCV for RA[7,8,10,15,17,19].

In our study, DAS-28 was weakly correlated with RF, anti-CCP, and anti-MCV. There were no differences between the active and mild active patients regarding RF, anti-CCP and anti-MCV levels. There are studies suggesting a significant correlation with disease activity[8,14,15,18,21] while some others did not find any correlation[16,20].

In HCV infection extra-hepatic involvements like arthralgia was frequent (23%). Moreover asymptomatic joint involvement was detected by ultrasound in 96.5% of the patients[22]. In our study there were 10 patients (33%) with arthralgia among the hepatitis C patients. There was no difference between the patients with or without arthralgia regarding the autoantibody levels. A subgroup analysis of hepatitis C patients according to the histological activity index and fibrosis was planned however the numbers of the patients were not adequate for statistical comparison.

There is only one study in the literature investigating the diagnostic performance of anti-MCV in RA including hepatitis C patients as controls[10]. However their control group was not homogeneous regarding diagnosis and a subgroup analysis was not performed with the hepatitis C patients. Their results favored specificity of anti-CCP.

It is well known that auto-antibodies may be positive in HCV infection without clinical involvement. HCV infection also establishes a linkage between extra-hepatic involvement and autoimmunity causing further confusion in evaluating the autoantibody responses[27]. It is probable that citrullination and mutation of the vimentin encourages autoimmunity. Although citrullination plays a role in RA, the process is not specific and it has been detected e.g. in chronically inflamed tonsillar tissues[20]. The role of mutation of vimentin in the pathogenesis of HCV infection needs to be clarified.

In conclusion; anti-MCV levels are high in RA, and it has a significant correlation with anti-CCP and disease activity. However its lower sensitivity and lower specificity suggest that it should be interpreted with caution especially in HCV patients. Currently, there is not an ideal assay for RA nevertheless anti-CCP seems to have proved itself amongst the opponents.