A Rare Cause of Chronic Low Back Pain: Osteoblastoma of the Lumbar Spine

Chronic low back pain is an important part of the rheumatic complaints. Although tumoral reasons are rare in the etiology of back pain, diagnosis and treatment of the process often is delayed. We aim to share our case of osteoblastoma of the lumbar spine as a rare cause of chronic low back pain in addition to contributions of Ucan et al’s case which is entitled with Schwannoma in three patients with low back pain[1].

A 21 year-old male patient admitted to our clinic with low back pain persistent to medication for the last 3 years. He was first referred to physical medicine and rehabilitation department and then to a neurosurgery department after several visits because of persistent pain. He had no history of trauma. His pain was not aggravated by coughing, standing or sitting; and the pain was not relieved by salicylates or NSAIDs. Whole blood count (CBC), erythrocyte sedimentation rate (ESR) and rheumatoid factor (RF) were found within normal limits. Physical examinations were found normal except the tenderness extending from T12 to L5 associated with paravertebral muscle spasm. His lumbosacral CT was taken and then a tumoral mass was noticed enlarging transverse process and right lamina of L5 vertebrae with probable diagnosis of osteoblastoma or osteoid osteoma. The mass had a lytic nature with well defined osteosclerotic boundaries and facet joints were normal (Figure 1). An MRI was taken to evaluate the soft tissue expansion which showed no affection (Figure 2). A CT-guided biopsy resulted with unsatisfactory sample gathering. Then he has taken to the operation theatre and curettage and frozen section was performed since the probable diagnosis was osteoblastoma. After confirmation of benign tumoral process, the cavity was filled with allograft. The histopathological examination confirmed the diagnosis of osteoblastoma. Following surgery, the patient was asymptomatic; there was no neurological dysfunction and no residual pain or discomfort. No recurrence has been observed for four years. 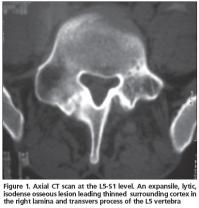 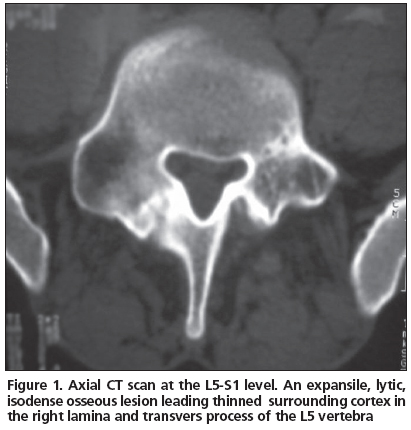 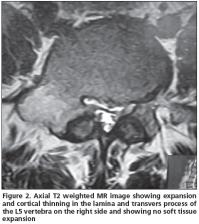 Figure 2. Axial T2 weighted MR image showing expansion and cortical thinning in the lamina and transvers process of the L5 vertebra on the right side and showing no soft tissue expansion
× 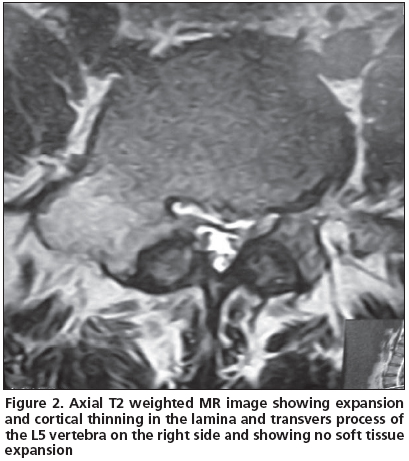 Osteoblastoma is a relatively rare bone neoplasm, constituting approximately 1% of primary bone lesions and 3% of all benign bone tumors[2]. This benign, osseous tumor occurs most commonly in adolescents and adults in their second or third decades and the male/ female ratio is about 2:1. About 7 to 25% of osteoblastomas involve the spine[3] and it commonly tends to involve the posterior components including the pedicle in most cases, in contrast to other benign tumors, which often involve the vertebral body[4].

Patients with osteoblastoma usually present with pain of several months’ duration. In contrast to the pain associated with osteoid osteoma, the pain of osteoblastoma usually is less intense, usually not worse at night, and not relieved readily with salicylates. Pain, local tenderness and even scoliosis may appear before the lesion is visible on roentgenograms; so routine X-rays can often delay the diagnosis.[3]. Osteoblastoma causes dull, localized pain, as in our case or is asymptomatic. It causes pain of varying intensity and duration, typical of slow growing benign tumors which delays treatment. It occurs more rarely than osteoid osteoma but sometimes it can be very difficult to distinguish these two from each other[2].

Osteoblastomas are composed of an abundantly vascular connective-tissue stroma with active production of osteoid and primitive woven bone. A central lucency with a variable zone of peripheral sclerosis is the typical pattern; osteolysis and mass effect are frequently present[3]. It can be seen in any area of skeleton but it is the only benign tumor which shows primary affection to spinal column, and both the body and posterior arch of vertebrae[3,5]. The diagnostic radiographic feature is usually a single, round area of osteolysis which expands the bone and it is not always with well defined boundaries. Marked osteolysis may be seen around the lesion which is not as extensive as in osteoid osteoma[6]. Histologically, osteoid osteomas and osteoblastomas are similar. Their most remarkable difference is: osteoblastoma has an unlimited growth potential with a capability of malignant transformation and is larger in size (usually larger than 2 cm). Plain radiography and CT findings are similar, including radiolucent nidus, matrix calcifications, and accompanying bony sclerosis. Differentiation is made on the basis of size, and the larger lesions are typically categorized as osteoblastoma, but osteoblastoma detected early and not exceeding a diameter of 2 cm makes the distinction difficult. Then, clinical presentation plays an important role in the diagnosis. Osteoblastomas are known to have a high incidence of neurological deficit. Neurologic involvement has been reported in 25–50% of patients. The tumor located in the spine can cause neurological symptoms. The case presented here had no neurological deficit.

In differential diagnosis of osteoblastoma; osteosarcoma, giant cell tumor and aneurysmal bone cyst must be considered[2].

Treatment depends on localization, size and stage of tumor at the time of diagnosis. While in stage 1 (latent phase) or stage 2 (active phase) osteoblastoma, intralesional curettage is advised; marginal or wide resection is required in stage 3 (aggressive phase)[2,4,5].

Although complete resection of the tumor is essential to prevent recurrence, long term follow up is essential because of considerable recurrence rate, reported as 10 to 15% of cases[3].

So, primary bone tumors such as osteoblastoma should be considered in the differential diagnosis of chronic low back pain especially in young males and the patients should be examined carefully if they repeatedly admit with persistent pain.