A Case of Axial Spondyloarthritis without Sacroiliitis

Our case is an HLA B27-positive 60-year-old female patient who had been suffering from inflammatory back and heel pain for 10 years. While sacroiliitis was not observed on either magnetic resonance imaging or pelvic X-ray, all possible radiographic findings of axial spondylitis and enthesopathy were observed on the radiographs, including bamboo spine and trolley track sign. We thus stress the diagnostic difficulties. (Turk J Rheumatol 2009; 24: 166-9)

A 60-years old patient came to our clinic with complaints of back pain for 10 years. We learned that her pain increases with resting and decreases with movement. She had a history of bilateral heel and alternate bottock pain also. She experienced temporary benefit from nonsteroidal anti-inflammatory drugs. She had morning stiffness for about 2 hours.

Her hemogram and routine biochemical analysis were in normal range, erythrocyte sedimentation rate 54 mm/ hour (normal:0- 12), C-reactive protein 118 mg/L (normal:0-5), rheumatoid factor (RF) was negative. Brucella agglutination tests were negative. Urine test was normal. No infection was established in her examination and tests. Her HLA B27 was positive and Bath Ankylosing Spondylitis Disease Activity Index (BASDAI) was calculated as 6.7.

Her postero-anterior chest x-ray was evaluated as normal. In thoracic (Picture 1) and lumbosacral (Picture 2) graphs, marked squaring in her vertebras, shiny corners, symmetric syndesmophytes, bamboo spine, trolley track sign, osteoporosis and left faced scoliosis were observed. In pelvic x-ray her sacroiliac joints were normal. There were enthesopathic changes in the localization of the insertion of achilles tendon in calcaneus posterior bilaterally (picture 3). In magnetic resonance imaging (MRI) and conventional radiography, bilateral sacroiliac joints were regular and joints cartilage were normal (Picture 4,5). There were not any pathological signal changes in the bone surfaces that form the joints and the soft structures that were examined. Depending on the current clinical status and the radiography and imaging tests, the patient was defined as spondyloarthropathy (SpA). 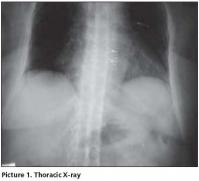 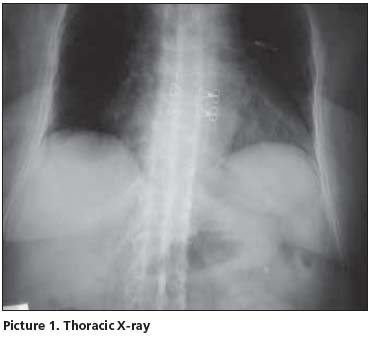 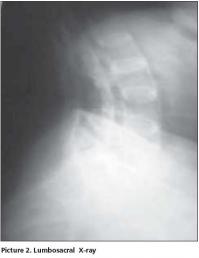 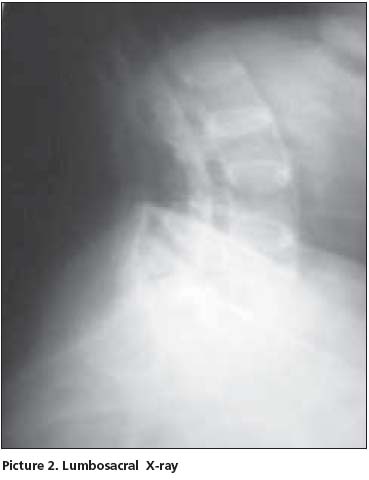 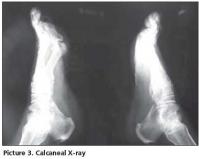 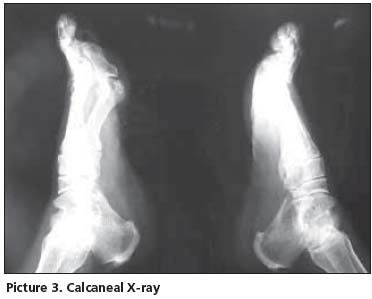 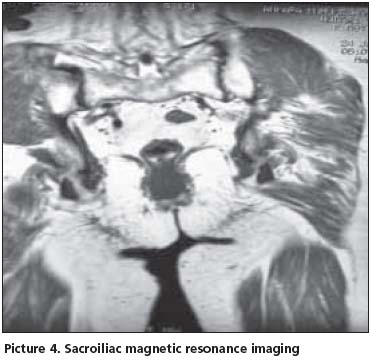 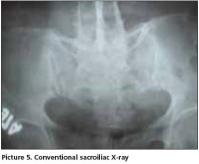 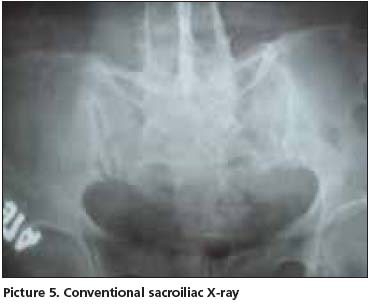 Diagnosing axial SpA [Ankylosing Spondylitis (AS) and undifferentiated SpA(uSpA) with predominant axial involvement but without radiographic sacroiliitis] in the absence of radiographic sacroiliitis poses a major challenge to many physicians. In the absence of diagnostic criteria, classification criteria are often used to aid the diagnostic process in daily practice. The most often cited classification criteria for SpA are the Europian Spondylarthropathies Study Group (ESSG) criteria that were proposed in 1991. According to these criteria, in the absence of sacroiliitis; patients with inflammatory spinal pain or synovitis (asymmetric, predominantly in the lower limbs) in addition to any one of the following (positive family history, psoriasis, inflamatory bowel disease, alternate bottock pain, enthesopathy) are classified as seronegative SpA with 77% sensitivity and 89% specificity. In the presence of sacroiliitis, sensitivity is 86% and specificity is 87%[1]. However in a recent study from Spain, it was observed that the performance of the ESSG criteria as diagnostic criteria in daily practice was moderate: only 46.6% of patients with possible SpA who met the ESSG criteria at entry into the study were judged by their rheumatologist to have SpA after 5 years of follow up[2]. The typical radiographic changes of AS are seen primarily in the axial skeleton, especially in the sacroiliac, discovertebral, apophyseal, costovertebral, and costotransvers joints[3]. Syndesmophyits seen in AS and entheropathic arthiritis are usually symmetrical and bilateral, while that are seen in reactive arthiritis and psoriatic arthritis are nonmarginal, rough and asymmetrically located[4]. The radiological appearance of arthritic changes in sacroiliac joints has been regarded as a hallmark of AS according to Modified New York Criteria[5]. In AS patients in addition to sacroiliitis, arthritic changes in the spine visualized by x-ray develop in 57- 88% of the patients[6,7]. In literature, there were AS patients with typical clinical features but no radiological sacroiliitis[8]. Khan et al reported that radiographic sacroiliitis is frequent in AS but is not an early or obligate manifestation of the disease. In particular, relatives of AS with IBP may not show radiographic sacroiliitis even after long follow-up[9]. Rudwaleit reported that in a small proportion of AS patients may never develop radiolographic sacroiliitis despite having IBP for many years. SpA patients with predominantly axial symptoms should be considered as having a same disease entity as AS patients, independent from the presence of radiographic sacroiliitis[10]. In one study 60% of SpA patients had developed definite AS after 10 years of follow-up. It took an average of 9 years (+/-6 years) for radiological sacroiliitis to appear in these patients. A further 20% still had chronic uSpA and might have developed radiological sacroiliitis if their follow-up had been continued for a longer time[11]. Again in another family study, radiographic evidence of sacroiliitis was found in 40% of patients with a symptom duration of <10 years, 70% with symptoms for 10-19 years, and 86% with symptoms for ≥ 20 years[12]. The morphological changes used to assess spinal involvement in x-ray were syndesmophytes, shining corners, squaring, arthritis of the apophyseal joints, spondylodiscitis, bamboo spine and trolley track sign[13]. Descriptions of spinal x-ray changes typical of AS without concomitant radiological sacroiliitis are thus relatively uncommon. Besides, Moll reported that these spinal x-ray changes develop later in the course of AS and usually after radiological sacroiliitis is evident.[14]. MRI is considered to be very helpful in detecting signs of sacroiliitis that are not yet visible in x-ray[15]. Although our HLA B27 positive patient has been suffering from IBP for 10 years, no sacroiliitis was detected in her pelvic x-ray and MRI. However in her throracic and lomber x-ray, all radiological abnormalities such as squaring, shiny corner, syndesmophytes, bamboo spine, trolley track sign were clearly present. In her foot x-ray, bilateral calcaneal enthesopathy was detected.

It has recently been showed that patients with early disease without radiographic sacroiliitis (uSpA with axial involvement) do not differ in this regard from patients with definite AS (with radiographic sacroiliitis) of short duration (<10 years) with respect to disease activity (as evaluated by BASDAI)[16]. In our case; BASDAI score was 6.7 and the disease was considered active also.

Depending on all these findings; we want to focus on the possibility of patients with long term spondyloarthropathies features who have typical radiographic changes of axial spondylitis without sacroiliitis. That is why we strongly believe the importance of the classification criteria in order to avoid misclassification.