Systemic lupus erythematosus (SLE) is a chronic, autoimmune, complex, multi-organic and episodic disease. Approximately 15% of all cases experience onset in childhood and adolescence. The coronary pathology has been recognized as the primary cause of morbidity and mortality in patients with SLE, with an incidence 9 times higher and an attributed mortality of up to 36%. Different mechanisms, alone or combined, have been implicated in the pathogenesis of coronary disease in patients with SLE. The procoagulant state in SLE patients promotes the development of acute coronary events, determined not only by the antiphospholipid antibodies, but also by the high levels of fibrinogen and plasminogen inhibitor-1. The antiphospholipid syndrome (APS) is characterized by vascular thrombosis, pregnancy loss, and thrombocytopenia with antiphospholipid antibodies. The cardiac system is one of the primary targets in APS. Patients with SLE and APS have an increase risk of acute myocardial infarction (10 times greater). Prospective studies have demonstrated the association between antiphospholipid antibodies and the first episode of venous thrombosis, acute myocardial infarction and cerebral vascular accidents.

We present the clinical case of a 13-year-old male with a diagnosis of SLE and secondary APS with an extensive acute myocardial infarction. In our patient, coronary alterations were not found, which correlates more to APS. It is important to remember that patients with SLE and secondary APS may develop thrombotic complications at any level, and even though thrombotic or ischemic cardiac events are unusual, they must always be considered. (Turk J Rheumatol 2009; 24: 156-8)

Systemic lupus erythematosus (SLE) is a chronic, autoimmune, complex, multi-organic, and episodic disease, which results as a combination of environmental, genetic and hormonal factors. It is commonly found in women between 20 and 40 years of age, and approximately 15% of all cases begin in childhood[1]. SLE diagnosis is based on the criteria of the American College of Rheumatology modified in 1997, with at least 4 of 11 criteria[2-4]. The antiphospholipid syndrome (APS) is characterized by the presence of vascular thrombosis, anticardiolipin antibodies, lupus anticoagulant and/or fetal loss. APS can be recognized as a primary disease or associated with another autoimmune illness. Since there is no pediatric prevalence of APS due to the lack of diagnostic criteria validated in children, adult guidelines are used along with clinical judgement. An online record was developed (a European project with international extension), called Ped-APS Register, in an effort to collect data and learn more about the characteristics of APS in children. There are currently 126 pediatric cases with APS from 14 different countries. Of the 126 cases, 49 are associated with SLE and 4 with lupus-like illness.

The cardiovascular system is one of the primary targets of APS, with multiple manifestations that range from asymptomatic cutaneous vasculitis up to massive acute myocardial infarction (AMI)[5-7].

We present the case of a patient diagnosed with SLE and secondary APS with a massive AMI, highly relevant because of its low frequency in childhood.

We report the case of a 13-year-old male with a history of fever for two months, skin lesions characterized with macules and papules on the face, neck, thorax and arms, Raynaud’s phenomenon of the hands, palate ulcers, and swelling of the knees. He was admitted into the hospital with fever and chest pain. The first lab results showed no hemolytic anemia but leuko- and lymphopenia, C3: 32 mg/dl (90-180), C4: <5.72 mg/dl (10-40), IgG: 2190 mg/dl (770-1510), antinuclear antibodies (ANA) with fine speckled nuclear pattern 1:5120 (<1:160), IgM antibeta2- glycoprotein 1 antibodies 73.2 U/ml (0-10), IgM anticardiolipin antibodies 58.8 U/ml (0-10), positive lupus anticoagulant, serum levels of creatine phosphokinase 918 UI/L (21-232), MB fraction 25 UI/L (0-6), and troponin T 26.36 ng/dl (0-0.5). Extensive myocardial infarction was documented on EKG; the echocardiogram and scintillography showed that the posterior and lateral sides, from the base to the apex of the heart and involving all wall thicknesses, had severe ischemia (Figures 1, 2). The arteriography did not show evidence of obstructive disease or atherosclerotic plaque. The angio-resonance of the brain showed arterial and venous vasculitis. SLE was diagnosed based on discoid lupus, photo sensibility, oral ulcers, serositis (pericardiac effusion), non-erosive arthritis, leukolymphopenia, positive ANA test, positive findings for antiphospholipid antibodies (positive anticardiolipin, lupus anticoagulant and anti-beta2-glycoprotein 1), and central nervous system involvement (history of seizures and cerebral vasculitis). 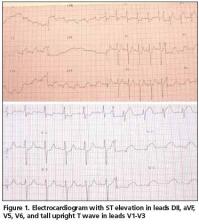 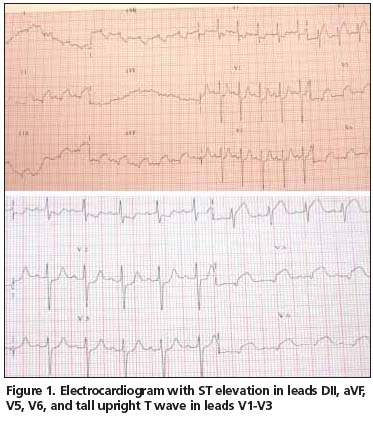 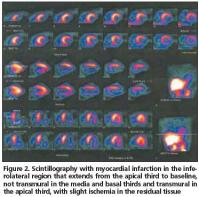 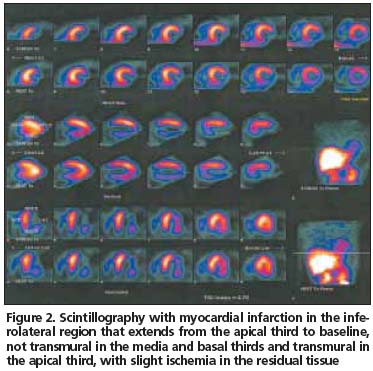 Treatment was started with prednisone at 60 mg/day, azathioprine 2.5 mg/kg/day, hydroxychloroquine 6 mg/ kg/day, sun filter, and anticoagulation with a low molecular weight heparin in the acute phase, continuing with acenocoumarin at 4 mg/day.

The cardiac involvement in SLE frequently includes pericarditis, Libman Sacks endocarditis and myocarditis[8]. The vascular events are the third cause of death only after nephropathies and infections[9].

The coronary disease has various mechanisms. The coronary thrombosis can be found with arteriosclerosis as well as in hypercoagulability states, like nephrotic syndrome, APS and deficiency in anticoagulation factors[10,11].

The high levels of antiphospholipid antibodies and lupus anticoagulant particularly increase the risk of thrombosis, as do the presence of prothrombotic alterations, like classically dyslipidemia. In our patient, there were no alterations in the coronary arteries (shown in the echocardiogram and arteriography) that correlated the ischemic event to APS.

Korkmaz and collaborators found that in 50 cases with AMI related to SLE, only 3 patients were less than 18 years of age, which evidences the low incidence[11].

In a review by Avcin and Silverman, they reported a prevalence of anticardiolipin antibodies in 44%, antibeta2- glycoprotein 1 in 40% and lupus anticoagulant in 22% of children with SLE diagnosis, showing an important frequency of these antibodies and the risk of thrombotic events[6]. The recurrence of thrombosis in children with SLE is lower than in adults. Bearing in mind the risks of anticoagulation therapy, it is suggested that this therapy have as an objective an international normalized ratio (INR) between 2 and 3 times the normal value in pediatric patients with thrombotic events[12].

There is some controversy regarding the coagulation time and the use of platelet anti-aggregation management in children. In our patient, acenocoumarin was used in the acute phase and hydroxychloroquine with known effect against thrombosis[13-16].

Currently, in our hospital (the Hospital Infantil de Mexico Federico Gomez, Mexico City), we have 300 children diagnosed with SLE; they are seen and cared for in the clinic for immunologic diseases. Of our SLE population, this is the first case with this association. Despite the rarity of the manifestation, it is important to always consider that any patient with SLE and secondary APS can develop thrombotic complications at any level (arterial or venous) at the onset or during the disease progression. Even though cardiac thrombosis and ischemia are unusual, they must be considered when clinical symptoms appear with known risk factors, because in the early stages of life they are related to high morbidity and mortality.