Conclusion: The greatest suppression of the radiographic progressive damage of large joints was achieved for the shoulders and knees. Meanwhile, ankle damage progressed. Therefore, ankle joint damage should be monitored even in patients treated with abatacept. In the upper limbs, prescribing abatacept to patients with RA depending on their state of upper limb large joint damage may suppress damage progression.

Small joint damage is associated with large joint damage in patients with early RA.[6] Damage to large joints, particularly of the shoulder, wrist, knee, and ankle, leads to functional disability.[7] Therefore, suppressing damage to the large and small joints is paramount to maintain functional remission. Radiographic changes are generally assessed on radiographs of the hands and feet. Therefore, large joints are not usually evaluated during structural remission assessments. The Larsen grading system is widely used for the radiographic assessment of large joints. DMARDs improve and suppress small joint damage in patients with RA.[8-13] Meanwhile, healing changes on radiographic images of large joints have been reported in the same patients.[14-16] The phenomenon of healing is characterized by the reappearance of a cortical plate, fillings of erosions, or subchondral bone sclerosis with osteophyte formation.[17] Assessment of rheumatoid arthritis by scoring of large joint destruction and healing in radiographic imaging (ARASHI) score include the status and change scores that are significantly correlated to Larsen grade (γ=0.89, p<0.0001 and γ=0.83, p<0.0001, respectively). However, 20.4% of joints without changes according to the Larsen grading system show improved ARASHI change scores.[18] Therefore, the ARASHI score is useful to assess large joint damage and healing, such as in secondary osteoarthritis (OA).

Thus, assessing the effect of each bDMARD on large joints may be important, although few reports on the use of bDMARDs for large joints exist.[15,16,19-21] Moreover, to our knowledge, the effects of mid-term abatacept treatment on large joints have not been published. Therefore, in this study, we aimed to investigate large joint damage progression using the ARASHI score in patients with RA treated with abatacept for three years.

This retrospective clinical study investigated the clinical course and background variables of patients with RA who fulfilled the American College of Rheumatology (ACR) classification criteria (1987) and/or the ACR/European League against Rheumatism (EULAR) criteria.[22,23] A total of 110 consecutive patients who started abatacept treatment at Kamagaya General Hospital between November 2011 and October 2014 were enrolled. Data of 39 patients who terminated the treatment before the three-year period or incomplete data (13 experienced inadequate effect, seven developed adverse events, eight were transferred, two developed onset of other diseases, and nine lacked baseline data) were excluded. In addition, individuals who had undergone joint operations were excluded. Finally, data of 71 patients (7 males, 64 females; median age 68 years; range, 41 to 81 years) were analyzed. Rheumatologists at our institution introduced abatacept to the patients. Overall, 50 patients received intravenous abatacept and 21 received subcutaneous abatacept. Clinical characteristics including methotrexate (MTX) use and dose, corticosteroid use and dose, CRP, erythrocyte sedimentation rate (ESR), disease activity score 28 (DAS28)-CRP, and Health Assessment Questionnaire Disability Index (HAQ-DI) of the patients were examined at baseline and at first, second, and third years. DAS28-CRP is a composite measure of disease activity.[4] HAQ-DI is a patient-reported measure of physical disability,[24] with questions related to 20 activities of daily living, such as dressing, grooming, arising, eating, walking, maintaining hygiene, reaching objects, maintaining grip, opening things, and other daily activities. Table 1 summarizes the demographic characteristics including age, sex, disease duration, body weight, RF positivity, anti-CCP positivity, first bDMARDs, administration method, MTX use, MTX dose, corticosteroid use, corticosteroid dose, CRP, ESR, DAS28-CRP, and HAQ-DI at baseline; and MTX use, MTX dose, corticosteroid use, corticosteroid dose, and CRP, ESR, DAS28-CRP, and HAQ-DI at first, second, and third years. The patients in this study had low MTX use and dose. In Japan, the approved MTX dose was ≤8 mg/week until February 2011, and it was increased to ≤16 mg/week thereafter. The patients in this study showed long disease durations and many were old enough to present chronic kidney disease; thus, the use of MTX was limited. The study protocol was approved by the Kamagaya General Hospital Ethics Committee (approval number: TGE00888-064). A written informed consent was obtained from each patient. The study was conducted in accordance with the principles of the Declaration of Helsinki.

Table 1. Demographic characteristics at baseline and at first, second, and third years
×

The ARASHI scores for 697 joints (141 shoulders, 139 elbows, 141 hips, 134 knees, and 142 ankles), excluding those that had undergone surgical operations, were calculated. Radiographs were acquired at baseline (ARASHI status score) and first, second, and third years (ARASHI change scores). Two physicians separately measured the ARASHI scores on radiographs while being blinded to the patient information. Paramedical staff recorded the ARASHI scores. Disagreements were resolved by consensus among the observers. Radiographic progression rate of damage to large joints of the upper and lower limbs (shoulders, elbows, hips, knees, and ankles) were analyzed. Radiographic large joint progression damage was defined in patients with deterioration of the total ARASHI change score. In addition, factors associated with the progression of upper and lower limb large joint damage were analyzed.

Cochran-Armitage test was used to analyze large joint deterioration rates for years zero-one, one-two, and two-three. Variables of patients with or without large joint damage progression over a three-year period were compared to identify factors associated with the progression of upper and lower limb joint damage. Wilcoxon rank-sum and chi-squared tests were used to compare the following data between patients with or without large joint damage progression of upper and lower limbs: age, sex, disease duration, body weight, RF positivity, anti-CCP Ab positivity, MTX use at baseline, DAS28-CRP use at baseline, and at first, second, and third years, and the ARASHI status score for large joints of the upper and lower limbs. Multivariate logistic regression analysis was performed using the variables with p<0.1 in the univariate analysis. Moreover, the cutoff values for factors associated with the progression of large joint damage were estimated by multivariate logistic regression analysis using the receiver operating characteristics (ROC) method with the corresponding sensitivity and specificity and area under the curve (AUC). AUC ranges from 0.5 (no accuracy for discriminating) to 1.0 (perfect accuracy for discriminating). Significance was established at p<0.05. All analyses were performed using the R Statistical Package, version 3.3.2 (Product by Murdoch D).[25] 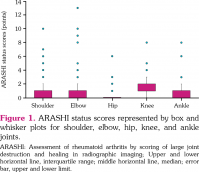 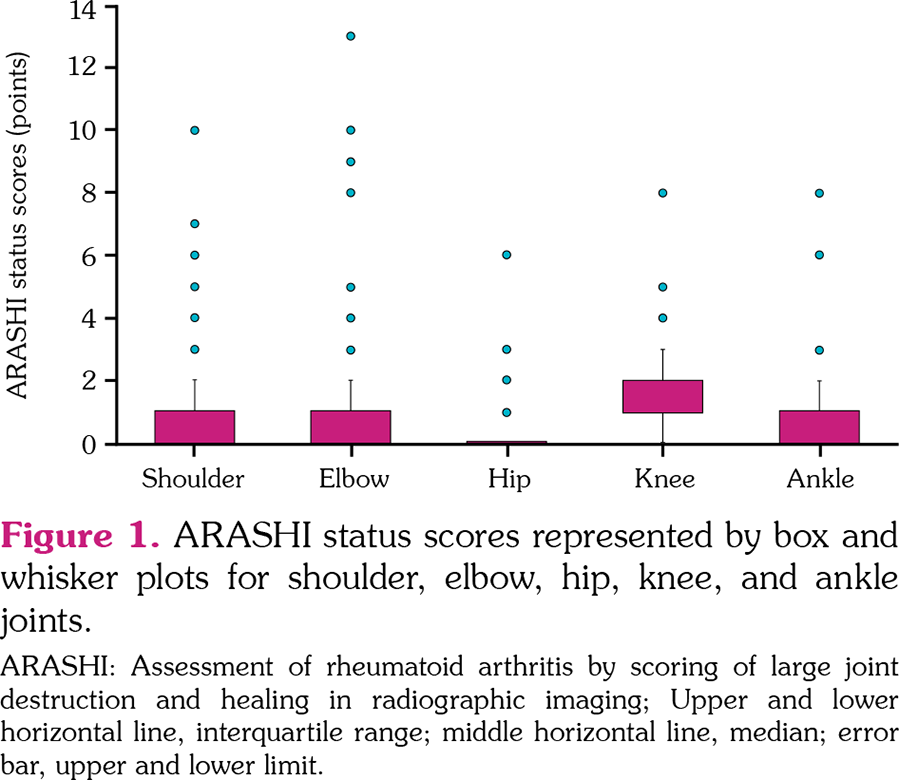 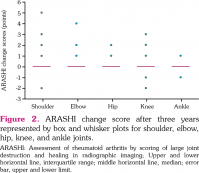 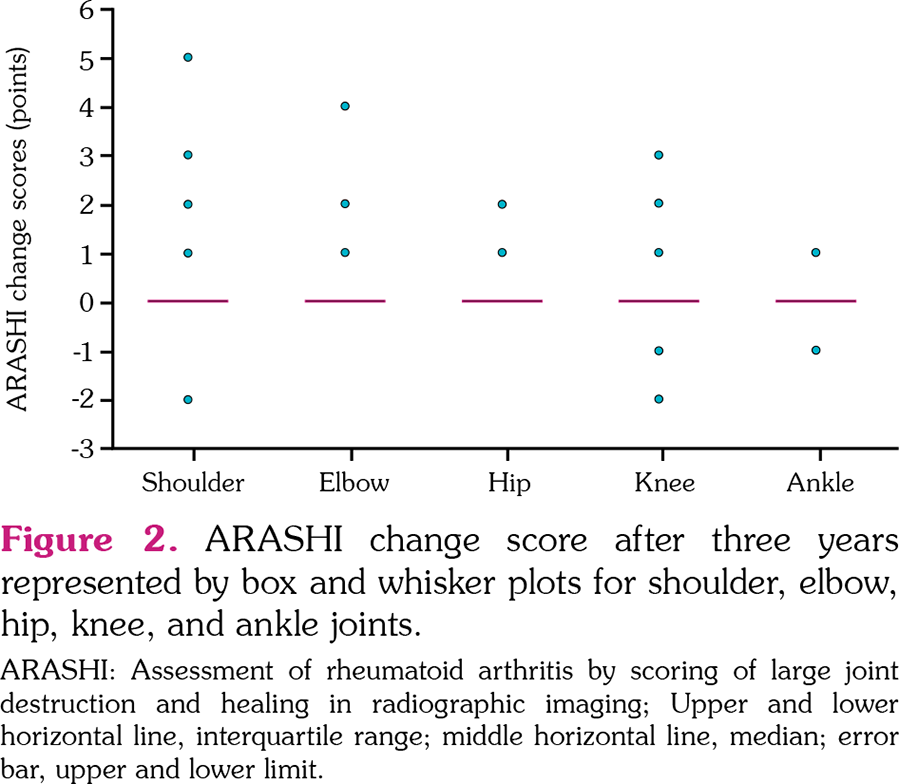 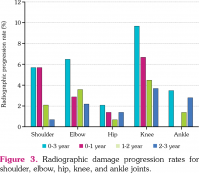 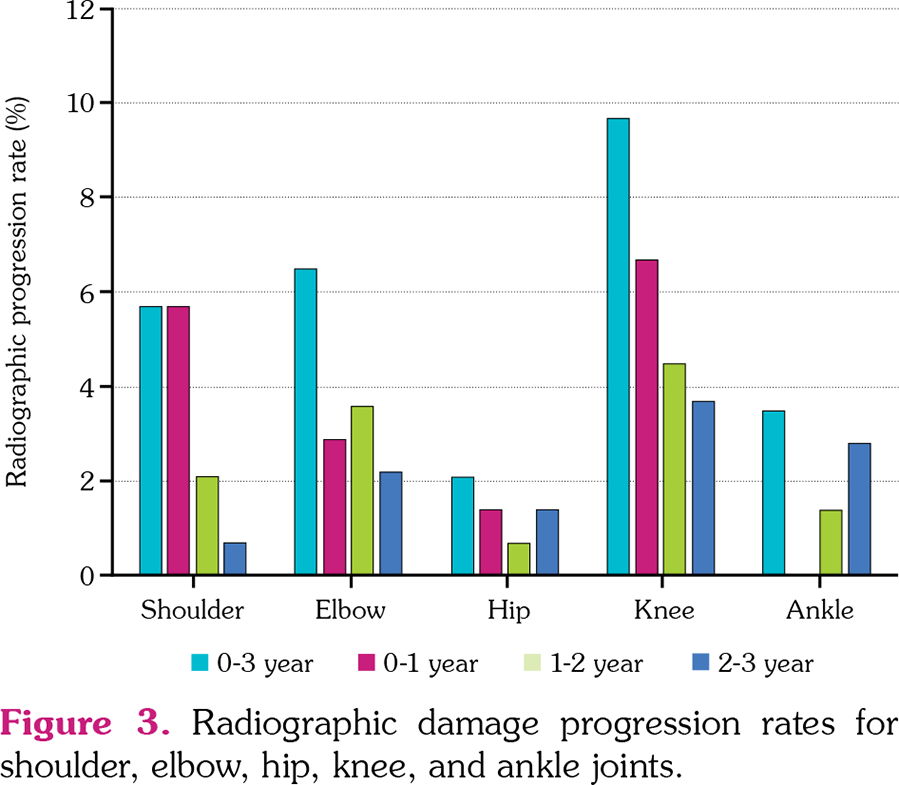 There are some limitations in our study. First, this was a single center study. Second, we did not include a control group. Multicenter studies including a control group and long-term follow-up are warranted to confirm the factors associated with progressive damage of large joints. Finally, our study lacked data of the excluded patients; however, we believe that the impact of these data on the results would be minor because only a few patients discontinued abatacept due to inadequate effects.