A Cross Sectional Study of the Impact of Human Immunodeficiency Virus, Hepatitis B Virus and Hepatitis C Virus on Rheumatoid Factor Production

Objectives: This study aims to investigate how human immunodeficiency virus (HIV), hepatitis B virus (HBV) and hepatitis C virus (HCV) affect the production of immunoglobulin M (IgM)-rheumatoid factor (RF).
Patients and methods: The study included 405 voluntary participants (139 males, 266 females; mean age 39.4±17.9 years; range 3 to 88 years) randomly recruited by a consecutive sampling technique in the main health facilities of the Center, East, Far North, Littoral and West regions of Cameroon. We excluded persons under treatment or hospitalized for any form of primary autoimmune disease. Blood samples were collected and used for serological analyses. We sought for the HIV antibodies (Ab); the core antibody (HBcAb), the surface antigen (HBsAg), and the replicative antigen (HBeAg) of the HBV; HCVAb of HCV and the IgM-RF.
Results: The prevalence of HIVAb was 7.61%, 38.7% for HBcAb, 5.43% for HBsAg, 1.26% for HBeAg and 6.41% for IgM-RF in the study population. The Far North region had the highest prevalence of IgM-RF (9.8%) and the Littoral region had the lowest prevalence (3.2%). The prevalence of RF was 6.7% and 5.7% for females and males, respectively (sex ratio of 2.25). The IgM-RF prevalence was 9.7%, 8.9%, 9.1%, and 27.8% in participants with positive serological results for HIVAb, HBcAb, HBsAg, and HCV, respectively.
Conclusion: Infection by HIV and HBV showed to poorly stimulated IgM-RF production. However, IgM-RF was highly produced in HCV infected participants. Increased IgM-RF production may contribute to cytotoxicity in tissues or organs of HCV-infected patients, leading to the onset of autoimmune diseases.

Rheumatoid factors (RFs) are autoantibodies against the fragment crystallizable region of immunoglobulin G (IgG) and found in 70% to 80% of rheumatoid arthritis (RA) patients being associated with more aggressive joint disease and increased frequency of extra- articular manifestations. Humoral immunity participates in pathogenic mechanisms through formation of immune complexes.(1) Although the action mechanism of RF leading to autoimmune disease (AID) is still poorly understood, it is known that the reaction of IgM-RF class with IgG results in immune complexes which could be deposited in the synovial membrane, on blood vessels or many other locations in the body leading to activation of complement proteins and the destructive action of cytotoxic cells.(1) High titers of IgM-RF in the serum of a RA patient should be considered as an important predictor of outcome of osteocartilaginous damage.(2) AID may evolve chronically, leading to destruction of target tissues and sometimes loss of its function.(3)

The world at large and Africa in particular are facing several endemic viral diseases that include human immunodeficiency virus (HIV), hepatitis B virus (HBV) and hepatitis C virus (HCV) infections, but little is known about the influence of these diseases on the production of autoantibodies in the African population. However, studies carried out on Caucasians have attempted to establish correlations between some viruses and stimulation of the immune system.(4) Viral infections are particularly highly prevalent in Africa where HIV is responsible for millions of deaths(5) while the prevalence of infection with other viruses such as hepatitis B and C remain high and keeps increasing in some countries. However, information is limited on the relationship between these viral infections and autoantibody production. Therefore, in this study, we aimed to investigate how HIV, HBV and HCV affect the production of IgM-RF.

This study was conducted at Faculty of Medicine and Biomedical Sciences, University of Yaounde I. between 05th February 2014 and 10th October 2014. The study included 405 voluntary participants (139 males, 266 females; mean age 39.4±17.9 years; range 3 to 88 years) randomly recruited by a consecutive sampling technique in the main health facilities of the Center, East, Far North, Littoral and West regions of Cameroon. The sample size was computed based on a prevalence of 50% since no known prevalence of IgM-RF amongst infected patients was available. In each of the selected regions, the most popular and most visited sites with ethnic diversity of population were selected by a convenience sampling technique. The study participants were recruited in health facilities inside the chosen sites and were either persons coming for consultation or healthy persons accompanying patients. We excluded patients under hospitalization and those who were presenting evidence of primary autoimmune diseases. Participants aged three (03) years and over, who freely accepted to participate or whose parents or guardians consented on their behalf were included in the study. For participants below 15 years of age (<15 years), a parental agreement was needed. After careful explanation of the study protocol and objectives, a data collection sheet was used to collect sociodemographic information including the sex, age and region of origin of each participant. Thereafter, 5 mL of whole blood was collected from each participant in a dry tube and further centrifuged (3000 g, 10 minutes) after two hours to obtain serum which was used for serological analyses. The protocol used in this study was approved by the Cameroon National Ethics Committee for Human Health Research (Decision N°2016/04/757/CE/CNERSH/SP of 28 April 2016). A written informed consent was obtained from each participant. The study was conducted in accordance with the principles of the Declaration of Helsinki.

Our data were documented and frequencies were calculated using the Statistical Package for the Social Sciences version 15.0 software. The correlations between parameters were evaluated by calculating the p value using the Fischer exact test and a p value less than 5% (p<0.05) was considered to be statistically significant.

Table 1. Distribution of study population as function of age groups
×

Figure 1. Representation of participants in study areas. Center region was most represented followed by West region. Fewer participants were obtained in Littoral region.
× 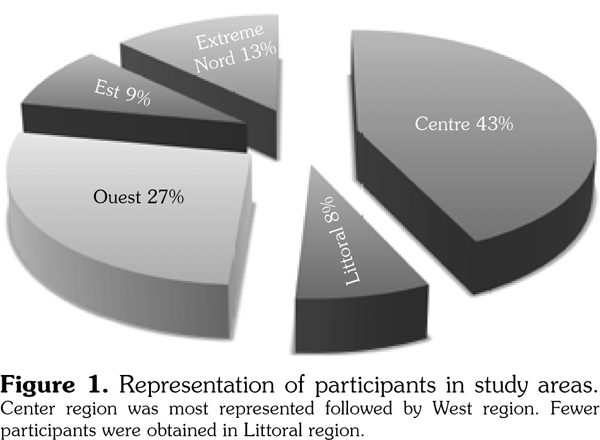 In our study, we obtained an IgM-RF prevalence of 6.41% with a higher occurrence in females (sex ratio=2.25) similar to a prevalence of 7% with a sex ratio of 2.61 times higher in females obtained in Ivory Coast in a study carried out on 300 participants randomly recruited and aged 3-67 years.(6) A previous study carried out in five regions of Cameroon revealed that 5.4% of the population was positive for RF(7) while this latter study did not involve subjects aged less than 15 years. Viatte et al.(6) revealed that 16% of the healthy population was positive for RF. The 16% prevalence can be easily understood since the authors used the enzyme-linked immunosorbent assay technique, which is more sensitive and able to detect several isotypes of RF (IgA, IgM, IgG) as compared to the less sensitive agglutination technique used in the previous studies.

Results from this study showed that IgM-RF is more prevalent in females than males. Of the 26 participants positive for IgM-RF, 18 were females and only eight were males, though the difference between the two sexes was not statistically significant (p=0.83). However, some studies demonstrated that autoimmune processes are influenced by sex hormones and that some female hormones have a role in the onset and worsening of disease as evidenced by the higher risk induced by oral contraceptive pills, pregnancy and postpartum.(8)

Also, this study showed that participants below 15 years of age had the highest prevalence of IgM-RF, and this may be due to non-specific activation of the immune system by various infectious and parasitic diseases being more frequent amongst this group of participants.(4) This high prevalence may also be attributed to occurrence of autoimmune diseases such as juvenile arthritis in some children.(9) IgM-RF was detected in groups of participants aged lower than 69 years with slight differences, but not in subjects aged over 69 years. This implies that production of IgM-RF occurs early in human life, followed by an arrest. It has been reported that several autoimmune diseases including RA can occur at any age but more clinically between 40 and 60 years.(10) However, the study of AID prevalence in patients over 65 years remains controversial and suggests that the clinical significance of autoantibodies in the elderly is associated more with health status than the aging phenomenon.(11) An investigation in the Japanese population revealed a positive and significant correlation between age and high levels of RF. Hayahara et al.(12) also showed that RF increases with age and reported that 20% of subjects aged over 65 years have a high rate of RF though our study revealed no clear correlation between age and RF detection. Indeed, previous observations contrasted with the results of Gaston(13) who showed that the prevalence of RF appears to be similar between 20 and 100 years. It should be noted that aging is accompanied by a decrease in immunity, impaired cooperation between T and B cells, a decrease in B cell turnover, an alteration in the co-stimulatory pathways,(14) and this set of phenomena accompanying aging may explain the lack of RF beyond 69 years as observed in our study although the sample size for this age group was small.

The prevalence of IgM-RF amongst HIV participants was 9.70% although there was no significant association between HIV infection and presence of RF (p=0.4371). This prevalence of IgM-RF was slightly higher compared to its prevalence in non-infected participants, thus suggesting that the virus may by some mechanism be stimulating the immune system and inducing the production of autoantibodies such as IgM-RF. It has been shown that, by their tropism for mucous membranes, viruses can deregulate the physiology of epithelial cells causing modifications on the cell membrane and making them targets of immune reactions. These modified epithelial cells can be stimulated by viral infections but also by immune complexes via activation of toll-like receptors.(15,16)

In our study, the IgM-RF prevalence was generally low amongst HBV-infected and HBV-free participants. The RF prevalence was 100% for the two HBeAg+ participants although the sample size was small. There was no significant difference for IgM-RF production between HBV positive or negative subjects (p=0.31). This suggested that chronic infection with HBV does not have a strong immunogenic power. However, overall, the prevalence of IgM- RF is higher in HBV patients than in healthy individuals free of HBV infection. Extrahepatic manifestations, including arthralgia and cutaneous manifestations, glomerulonephritis, polyarteritis nodosa and essential mixed cryoglobulinemia,(17) are also associated with chronic HBV infection.(18) Chronic HBV infection might also lead to immune diseases including the development of nephrotic syndrome particularly in children.(18)

Our results showed that the prevalence of IgM-RF was significantly higher amongst HCV infected participants (HCVAb+) compared to those who were HCV-free. Similarly, the association between RF and HCV gave a p value of 0.0008, suggesting a strong correlation between the presence of HCV and synthesis of RF. This further suggests the existence of a strong immune activity related to the production of RF in the presence of HCV. Mounach et al.(19) showed that rheumatological manifestations occurred during the infection of HCV, and revealed that the prevalence of RF may be up to 71% among HCV-infected patients. This high RF production has been shown to be associated with the activity of HCV-related cryoglobulinemia. Mechanisms allowing the virus to stimulate the immune system have been discussed previously. Moreover, Boussema and Rokbani(20) showed that HCV infection is associated to extrahepatic manifestations particularly through production of autoantibodies (antinuclear, anticardiolipin antibodies, RF, cryoglobulins). In patients with chronic HCV infection, cryoglobulinemia can be detected in 21%-54% of cases,(21,22) while unusually high titers of RF are observed in 70% of cases.(21)

Our study has some limitations. We observed that the human immunodeficiency virus and the hepatitis B virus have weakly stimulated the production of rheumatoid factor compared to hepatitis C virus; However, our study suffered from a low number of positive patients with different markers studied.

In conclusion, the main objective of this study was to investigate the impact of HIV, HBV and HCV on IgM-RF production. Our findings show that the prevalence of IgM-RF is 6.41% in the study population with a sex ratio of 2.25 in favor of females. Infections by HIV or HBV did not have any significant influence on the production of IgM-RF. However, infection by HCV strongly induced the production of IgM-RF in the study subjects. It is therefore important to take into consideration the possible occurrence of autoimmune diseases amongst persons infected by HCV.