Immunoglobulin G4 (IgG4)-related Mikulicz's disease (MD) is an immune-mediated fibro- inflammatory condition of unknown etiology characterized by the swelling of multiple exocrine glands including lacrimal, salivary, and parotid glands.(1,2) Immune thrombocytopenia is common in many autoimmune diseases. However, IgG4-related MD is rarely associated with immune thrombocytopenia and its pathogenic mechanism remains largely unclear. To our knowledge, only one case has been reported to date in the literature. In that case, the patient developed severe thrombocytopenia after autologous peripheral blood stem cell transplantation (PBSCT) for multiple myeloma (MM).(3) This novel study aims to report the case of a 48-year-old male patient suffering from MD with severe immune thrombocytopenia without hematological malignancies and review all reported cases of IgG4-related disease (IgG4-RD) with thrombocytopenia.

A 48-year-old male patient was admitted to our department with enlarged lacrimal and parotid glands associated with thrombocytopenia. He underwent resection for bilateral swelling of submandibular glands three years ago. The pathological examination revealed no tumor cells or focal lymphocytic infiltration. However, he repeatedly had enlarged lacrimal and parotid glands and dry mouth, without dry eye or arthralgia. He was then diagnosed with Sjögren syndrome (SS) and received anti-rheumatic treatment with hydroxychloroquine and Tripterygium wilfordii (a traditional Chinese medicine having definite effects on autoimmune and inflammatory diseases) for two years. However, the patient suffered from repeated recurrences of enlarged glands and presented with thrombocytopenia after two years. Physical examination revealed nontender bilateral swelling of lacrimal and salivary glands (about 2x1.2 cm2) and of multiple superficial lymph nodes. Laboratory studies showed severe thrombocytopenia (platelet [PLT] 6x109/L, normal range 100-300x109/L), serum IgG4 4.52 g/L (normal range 0.030-2.010 g/L), and negative angiotensin-converting enzyme and autoantibodies. The ophthalmological examination excluded dry eye. No focal lymphocytic infiltration was found in the biopsy of labial glands. Bone marrow cytology and biopsy results were normal. Subsequent positron emission tomography and computed tomography scan images showed abnormal glucose accumulation in several superficial lymph nodes, particularly left axillary lymph nodes (maximum standardized uptake value 11), suggesting a likelihood of lymphoma. The patient then underwent a biopsy of the swollen lymph node in the left armpit region. The pathological examination showed reactive hyperplasia of lymph nodes. Furthermore, the IgG4 immunohistochemical staining of the submandibular gland was performed. As shown in Figure 1, the pathological examination revealed IgG4+ cells >10/high-power field (HPF), and a proportion of IgG4+/IgG+ plasma cells >50%. The final diagnosis was IgG4-related MD with immune thrombocytopenia. The patient was given intravenous 40 mg methylprednisolone for seven days. The swelling of glands reduced, and the PLT count recovered to the normal level (193x109/L). The patient was treated with 40 mg oral prednisone for seven days. Unexpectedly, he had repeated recurrences of the swelling of glands with severe thrombocytopenia (10x109/L). Then, the patient received 120 mg methylprednisolone for five days. The swelling of glands narrowed again, and the PLT count slowly increased (56x109/L). The patient was given 60 mg prednisone and 150 mg cyclosporine. The swollen glands reduced to normal size, and the serum IgG4 level and PLT count returned to normal level in 1.5 months (Figure 2). A written informed consent was obtained from the patient according to the institutional guidelines. 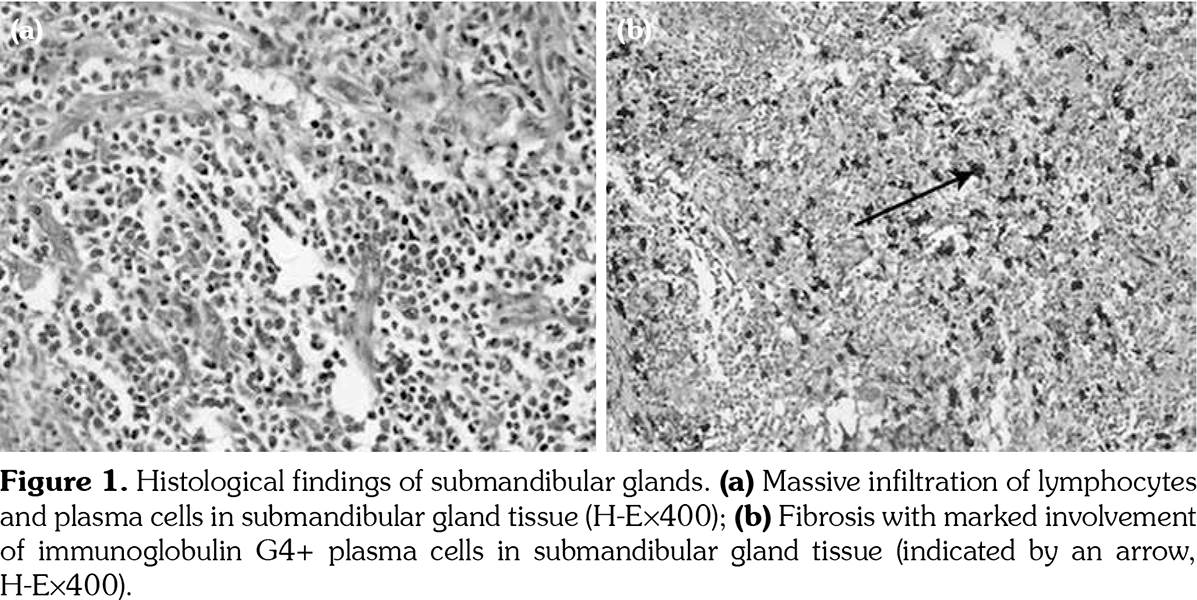 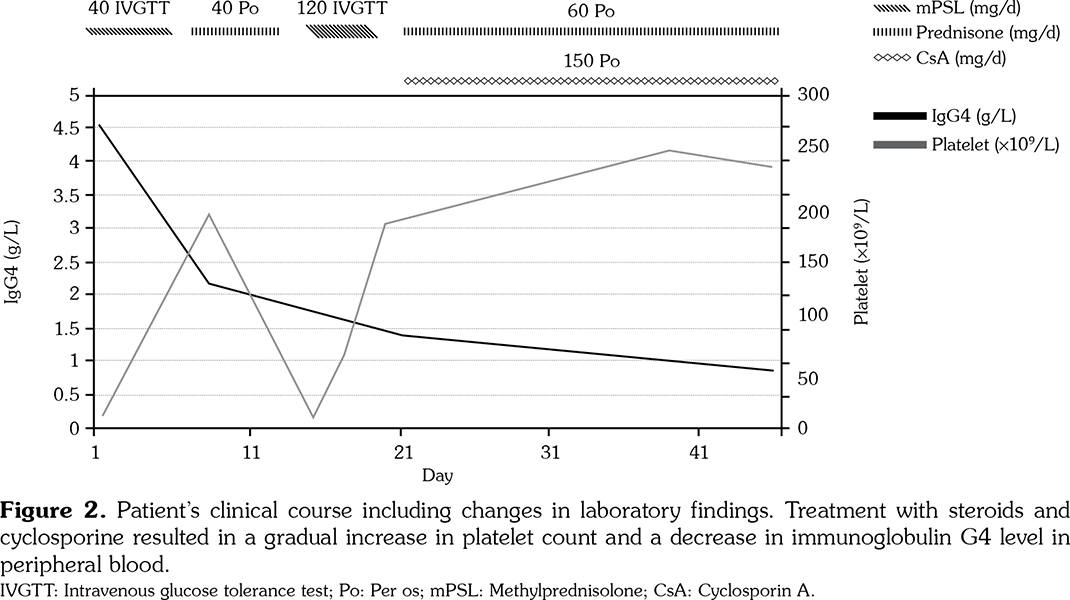 Immunoglobulin G4-related MD, a fibrosis- associated inflammatory disease characterized by painless bilateral swelling of the lacrimal and salivary glands, is diagnosed based on the presence of a high serum concentration of IgG4 (>135 mg/dL) or histopathological findings of IgG4+ plasma cell infiltration in swollen lacrimal, parotid, or submandibular glands (IgG4+ plasma cells/IgG+ plasma cells >40%, IgG4+ plasma cells >10/HPF).(4,5) MD is frequently misdiagnosed due to clinical features similar to those of SS.(6,7) The biopsy of swollen glands and serum IgG4 testing helped in differential diagnosis between the two diseases.(4,8) SS complicated with thrombocytopenia is common, while MD associated with thrombocytopenia is extremely rare.(9) Only one case with MM has been reported to date in the literature. In that case, the patient developed severe thrombocytopenia after autologous PBSCT for MM.(3) This study reported the first case of IgG4-related MD with immune thrombocytopenia without hematologic malignancies. In the present case, the diagnosis of IgG4-related MD was confirmed by the pathological examination of submandibular glands. Immunohistochemistry revealed IgG4+ plasma cell infiltration in swollen submandibular glands (IgG4+ cells >10/HPF and a proportion of IgG4+/IgG+ plasma cells >50%). Patient’s response to steroid therapy was good. However, the PLT count of the patient decreased immediately after steroid reduction and returned to normal after treatment with a high dose of steroids and cyclosporine, suggesting that the steroid dose was recommended to be high and immunosuppressive agents could help in reducing the dose of steroids for the patient suffering from IgG4-related MD with thrombocytopenia. The pathogenic mechanism of thrombocytopenia in IgG4-related MD is largely unclear. In the present case, serum anti-SS type A, anti-SS type B, anti-deoxyribonucleic acid, and anti-nuclear antibodies were all negative. Considering that Helicobacter pylori (H. pylori) infection could contribute to IgG4-RD and thrombocytopenia,(10) the H. pylori IgG was detected and 13C-urea breath test was performed. All these tests were negative. The study investigated whether thrombocytopenia was associated with increased IgG4. However, IgG4 was not detected in bone marrow tissue using immunohistochemistry. The PLT antibody in immune thrombocytopenia belonged mainly to the IgG1 and IgG3 subclasses of immunoglobulin.(11,12) It was presumed that thrombocytopenia might be due to the presence of anti-PLT antibody of other subclasses of IgG such as IgG1 or IgG3. Unfortunately, this was just a speculation because anti-PLT antibodies or IgG subclass were not detected before treatment. All cases of IgG4-RD associated with thrombocytopenia in the literature were reviewed. IgG4-RD associated with thrombocytopenia was first described by Nakamura in a patient with autoimmune pancreatitis in 2003.(13) Since then, only nine IgG4-RD cases complicated with thrombocytopenia have been reported (Table 1). All the cases responded well to steroid treatment. The mechanisms of thrombocytopenia is complicated in these reported cases. One reason for thrombocytopenia might be the presence of anti-PLT antibody.(10,14) or IgG subclass (IgG1/3/4) of PLT antibody(3,13,15-17) or autoantibody against a disintegrin and metalloproteinase with thrombospondin motifs 13(18,19) Another reason is the H. pylori infection that could lead to a decrease in PLT count.(10,16) In addition, impaired immunity due to autologous transplantation might also account for autoimmune thrombocytopenia.(3)

Table 1. Summary of cases of reported IgG4-RD with thrombocytopenia
×

This work was supported by grants from the National Natural Science Foundation of China Youth Fund (No. 81302567).